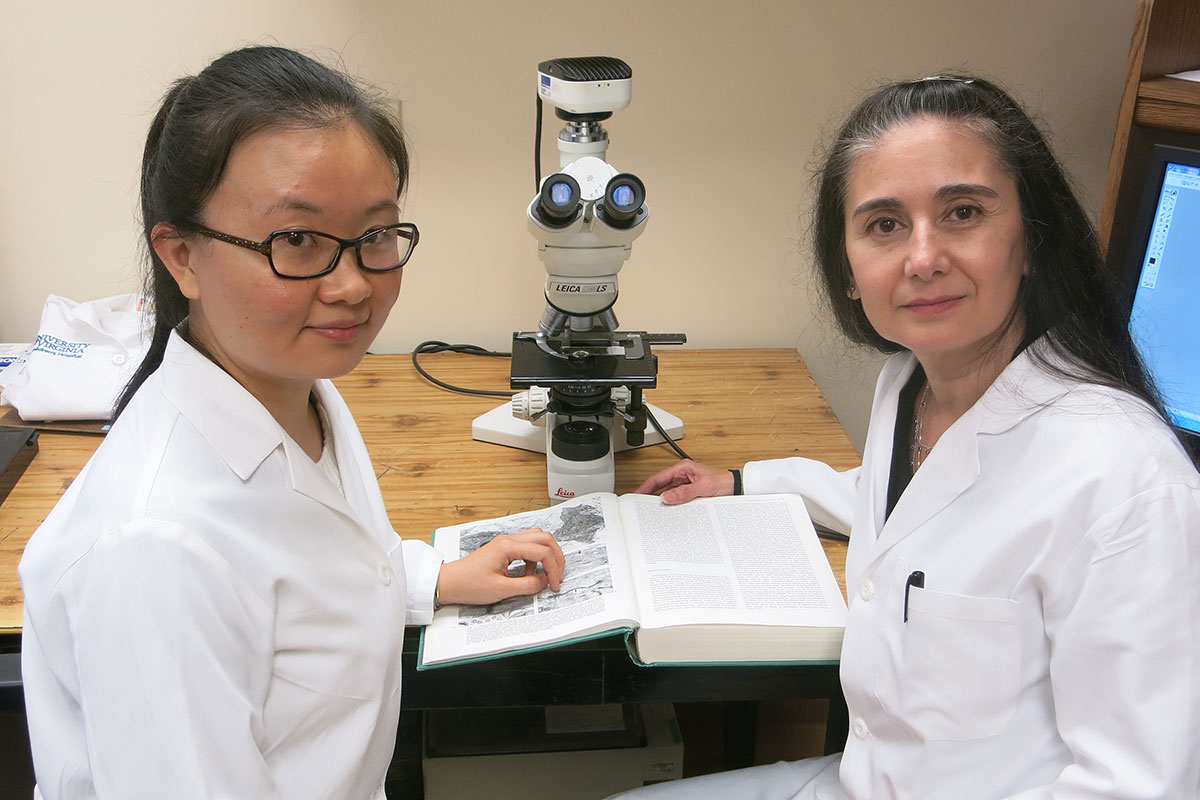 Graduate student Yan Hu, left and Dr. Maria Luisa S. Sequeira-Lopez have identified the cells that give rise to the blood vessels in the kidneys – a key step toward growing replacement kidneys.

In a significant step toward growing replacement kidneys, researchers at the University of Virginia School of Medicine have identified the cells that give rise to the blood vessels within the kidney. It’s a discovery of critical importance, as efforts to grow kidneys have long been frustrated by the inability to create the vasculature necessary for a functional organ.

The researchers also made the surprising finding that when the vessels are created, so is the blood that fills them. Until now, scientists had not known that the kidney was a blood-generating organ. Blood generation occurs within the kidney in fish, but this is a notable discovery in mammals.

Researchers have long been able to grow kidney tissue in a lab dish, successfully forming various components of the organ. But they have been unable to create the vessels that carry life-giving blood. Without that, there’s no hope of creating a functional organ. But by identifying the stem cells that develop into the vessels, UVA’s Dr. Maria Luisa S. Sequeira-Lopez and her team have given scientists a target to manipulate so that one day they may be able to grow complete organs. By understanding the natural development of the vessels, they can seek to reproduce and control it.

“We are very interested in knowing how the kidney vasculature develops. It’s crucial. You cannot have a kidney without its vasculature,” said Sequeira-Lopez, of the Department of Pediatrics and UVA’s Child Health Research Center. “It’s very easy to grow in culture the tubular part of the kidney, but not the vessels. This will be key, will be crucial, if we are thinking of replacement therapy or making a functioning kidney in the future from cells from a patient. If we don’t understand how the normal vasculature develops, we cannot reproduce or force cells to make it.”

“We finally found the precursor to these cells, so the next step is to determine the controllers,” Hu said.

As they were doing their work, Sequeira-Lopez and Hu noted something very unusual about the formation of the vessels in the kidney: As they formed, so did the blood they contained.

“A characteristic of this new precursor that we found is that it can also make blood cells. It not only makes the endothelial layer, the inner layer of the vessel, but it makes blood,” Sequeira-Lopez said. “So at the time you make a new blood vessel, it’s not that it’s empty, but it has its content in it – the blood cells are inside.”

The findings have been published online by the Journal of the American Society of Nephrology. The authors are Hu, Minghong Li, Joachim R. Göthert, R. Ariel Gomez and Sequeira-Lopez.

At UVA, There Is a Club for Everyone END_OF_DOCUMENT_TOKEN_TO_BE_REPLACED