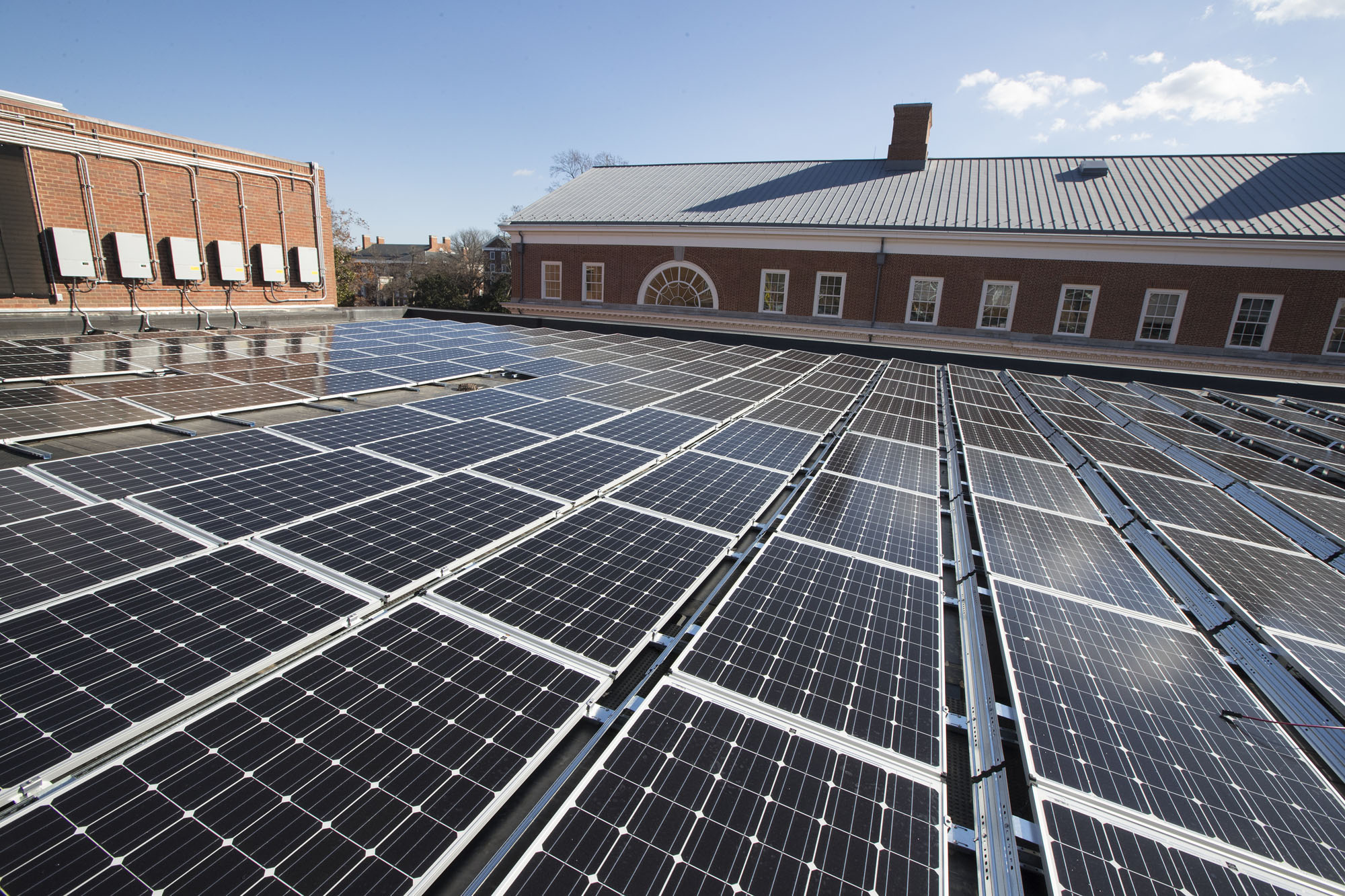 The University of Virginia and Dominion Virginia Power on Tuesday inaugurated two rooftop-mounted solar arrays on Grounds with a ribbon-cutting ceremony before an audience of more than 100 people at Newcomb Hall.

The solar panel systems – one atop Ruffner Hall and the other at the University Bookstore – include 1,589 solar panels, approximately 3-by-5 feet each. Together these systems will produce 364 kilowatts of electricity at peak output, enough to power about 91 homes. The electricity will go directly into the local power grid.

UVA is participating in Dominion’s Solar Partnership Program, an initiative that leases space for solar arrays at commercial, industrial or public facilities. Dominion has leased the roof space at Ruffner Hall and the bookstore, and Bay Electric installed the solar panels. The University will be able to use the system for student and faculty research, and to raise awareness about renewable energy.

“At UVA, we approach sustainability from many angles,” Sullivan said. “We have buses running on biodiesel fuel; we encourage ride-sharing and biking. We have University-wide recycling. In our dining halls, we compost and work to source food locally. We have taken steps to significantly reduce our water usage and emissions across the Grounds.” 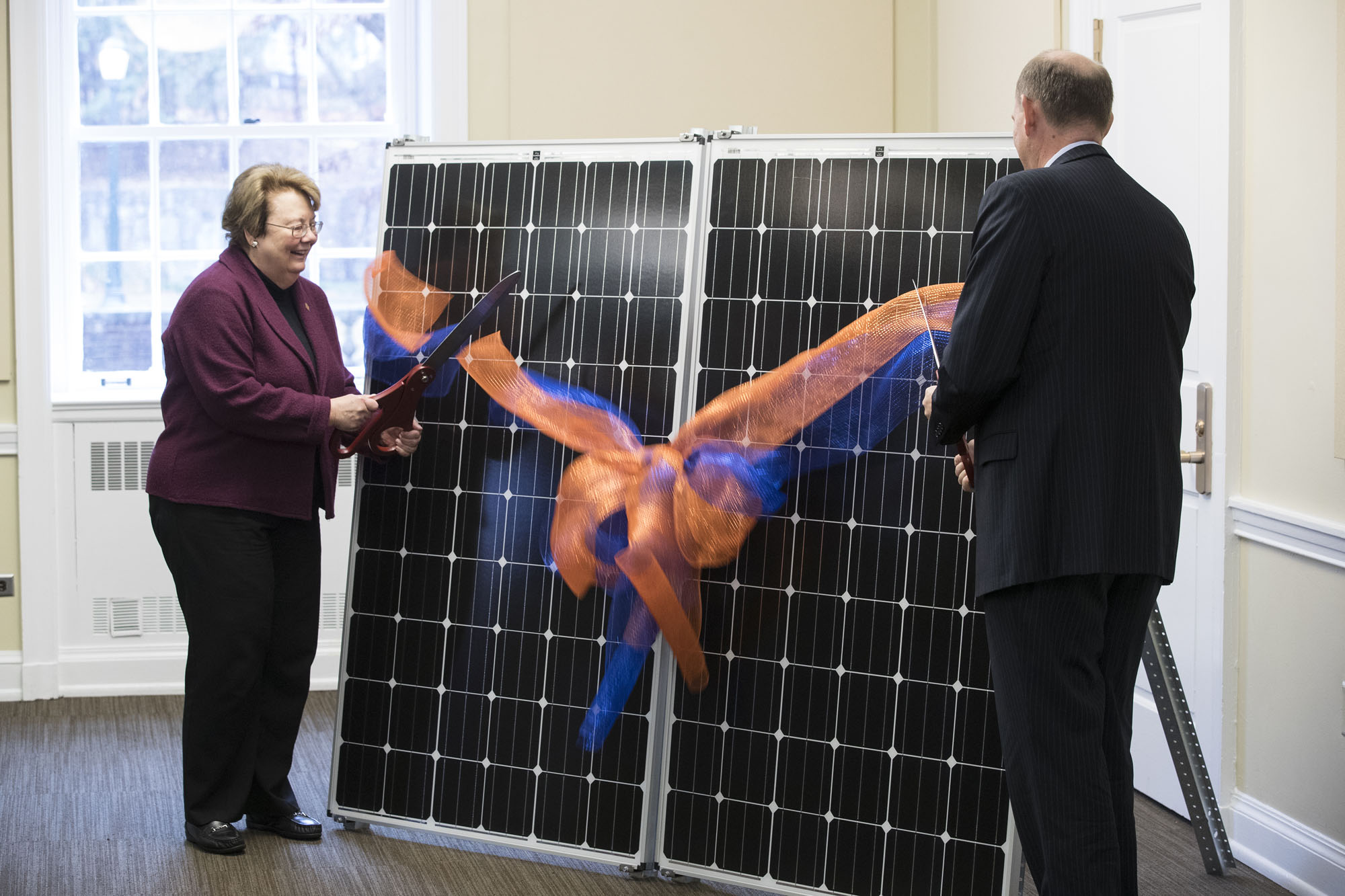 UVA has realized substantial savings on energy, water, trash and paper costs, enabling it to allocate those resources toward its mission of teaching, research, health care and service.

“Sustainability can be a form of teaching,” Sullivan said. “The behaviors we model for our students and the ways we urge them to consider their impact on the world can have far-reaching effects as our graduates settle in communities across the globe.”

Sullivan also praised the electric utility for its partnership program.

“I’m grateful to our partners from Dominion Virginia Power, who have brought these solar panel systems to the roofs of Ruffner Hall and the University Bookstore, and to our other partners and UVA staff who have contributed to this work,” she said.

Robert M. Blue, president of Dominion Virginia Power, spoke of his attachment to the University, from which he graduated in 1989 with a degree in government and where his great-great-grandfather, Francis Dunnington, taught chemistry. He credited Sullivan for her leadership on this project.

“There is much about the modern University that Thomas Jefferson would not recognize, but I am quite confident that he would strongly approve of this project,” Blue said. “Anyone who has ever toured Monticello knows that Mr. Jefferson constantly tinkered with the roof – always looking for the best materials and the best design, all in the name of technological progress. This project represents the best of that spirit – finding new ways to advance our mutual goal of a cleaner energy future.”

Blue said with the proliferation of electronic devices, there would be an extensive demand for clean electricity, produced without emissions.

“Our Solar Partnership Program, of which this is a part, has been tremendously successful in the commonwealth,” Blue said. “To date, Dominion Virginia Power has installed more than 5 megawatts of ground-mounted and rooftop solar-generating capacity at industrial and commercial sites and at universities such as here in Charlottesville. And there are plans to bring online more solar capacity from the program over the next few years so that Dominion can continue to assess and expand community-based solar in our state.”

At Tuesday’s news conference, Colette Sheehy, UVA’s senior vice president for operations, cited the involvement of students, faculty and staff across Grounds in the University’s ongoing sustainability efforts. She mentioned specifically Delta Force, which identifies energy-saving projects within the University’s buildings, including retro-commissioning to upgrade energy-intensive mechanical systems to newer, more efficient ones.

“Through Delta Force, we have reduced energy use in 37 buildings,” Sheehy said. “While that is only a fraction of UVA’s buildings, these 37 account for about 44 percent of UVA’s energy use. Since 2008, we have invested $8.7 million into Delta Force. Through these investments, we have avoided more than $22 million in energy costs.”

Sheehy also cited the university’s comprehensive sustainability plan, unveiled earlier this year. The plan builds on existing programs and gives UVA a five-year roadmap with 23 goals and milestones for efforts that will provide benefits locally and globally.

“The Board of Visitors has been very supportive of this work. One of the Buildings and Grounds Committee’s current-year goals is to develop an aggressive action plan to advance and enhance our sustainability plan,” Sheehy said. “We are very appreciative of the board’s support and the leadership of the committee, specifically Committee Chairman Kevin Fay, to help us set and achieve stretch goals.”

John Biagas, president of Bay Electric, which installed the solar panels dedicated Tuesday, said this project, and others like it, would have positive economic impacts, as well as encouraging student research.

“These panels can inspire students to pursue more efficient and cheaper solar panels,” he said.

Alex Wolz, student co-chair of the Energy Working Group and Sustainability Student Council, also spoke, praising the University and Dominion for getting involved in the project.

“This is part of a much-needed transition into a cleaner and more equitable future,” he said. “Thank you for pushing to make UVA a leader in sustainability.”

Sullivan and Blue used large scissors to cut a ceremonial orange-and-blue ribbon draped over two solar panels of the type installed on the roofs of Ruffner Hall and the UVA Bookstore.

Netflix to Add Ads. Why This Could Be a ‘Game-Changer’ for Your Viewing Experience END_OF_DOCUMENT_TOKEN_TO_BE_REPLACED

What’s Next for UVA’s Class of 2022? END_OF_DOCUMENT_TOKEN_TO_BE_REPLACED