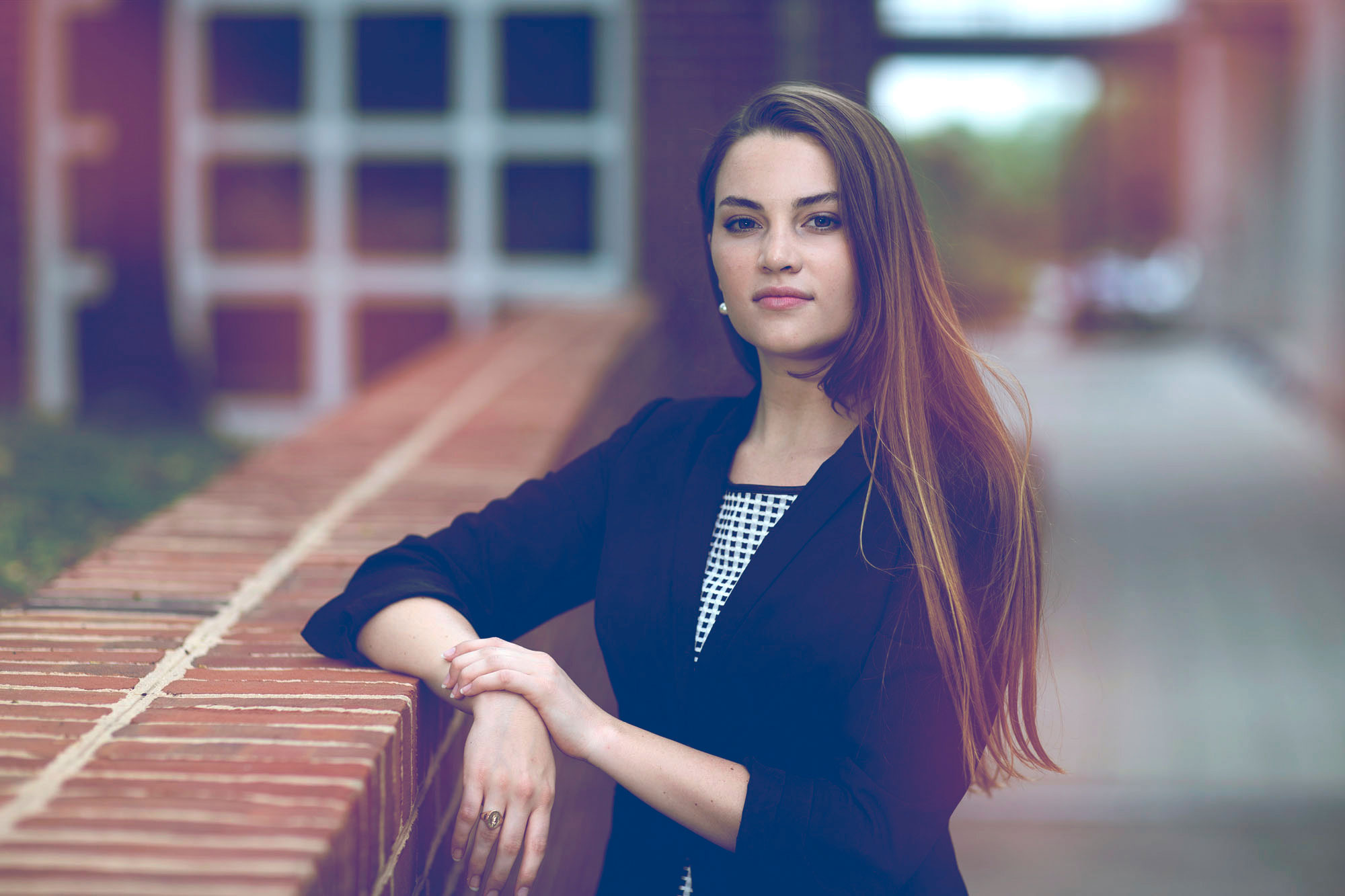 University of Virginia undergraduate student Jill Ferguson has been named a Truman Scholar and will receive $30,000 toward graduate school and the opportunity to participate in professional development to help prepare her for a career in public service leadership.

Ferguson, a third-year materials science and engineering and nanotechnology major, with an engineering business minor, said the award will assist her in her graduate research on solar photovoltaic cells.

University President Teresa A. Sullivan invited Ferguson to her office to inform her that she had received the Truman Scholarship. “Energy is my generation’s most critical challenge because it is a fundamental resource required for life, and yet our current sources are detrimental to the very environment that sustains us,” she said. “One-10,000th of the total solar radiation to the Earth contains enough energy to supply the world’s energy usage. I’m driven to help utilize the sun’s infinite resource, lest we deny our future generations a quality of life we now take for granted.”

Her work on solar photovoltaics also earned Ferguson a 2016 Belinda and Chip Blankenship Scholarship, a $5,000 prize given by 1992 materials science Ph.D. graduate Chip Blankenship to an outstanding engineering student.

“From the time she set foot on Grounds, Jill has been engaged not only in the classroom, but also in extracurricular activities related to science and engineering research,” said Robert Kelly, AT&T Professor of Materials Science and Engineering and co-director of the Center for Electrochemical Science and Engineering. “Her enthusiasm is contagious. As president of the student nanotechnology organization NEXT, Jill has been a highly visible and vocal representative of materials science, including speaking at the White House Forum on Small Business Challenges to Commercializing Nanotechnology in May 2015. She epitomizes what the Blankenship Undergraduate Scholarship seeks – superb academic achievement and a deep passion for materials research.”

Ferguson said she realized she was passionate about solar energy even before college – when explaining her research during the Roanoke Valley Governor’s School for Science and Technology’s science fair.

“It was the one topic that excited me enough to want to share it with others, read more about it and contribute to the energy dialogue,” she said. “I could talk about it with experts and laymen alike. At some level, everyone can understand not only the functionality, but also the utility of generating your own power from the sun.”

As a high school student, she participated in the Intel International Science and Engineering Fair in Los Angeles, where she received a Goethe Award for Young Researchers that funded a weeklong study experience at St. Michael Gymnasium in Bad Munstereifel, Germany – an experience that helped define her research, she said.

Andrus Ashoo, associate director of UVA’s Center for Undergraduate Excellence, said the scholarship recognizes Ferguson as both a leader and a public servant.

“In addition to possessing a contagious excitement for science and a knack for consensus-building and collaboration, Jill is among the most hard-working and humble students I have encountered in my tenure at the University of Virginia,” Ashoo said. “I’m very proud to have had the opportunity to work with her, and I look forward to what’s next in her pursuit of effective policy and renewable energy solutions.”

Ferguson, a first-generation college student, was invited to speak at the White House Forum on Small Business Challenges to Commercializing Nanotechnology last year. She works in the Office of the Associate Dean for Undergraduate Education and is an executive member of the Nano and Emerging Technologies Club at UVA, a teaching assistant for “Intro to Nanoscience,” a soloist with the NoTones a cappella group, and co-founder of Quad, an application connecting high school students with University mentors to mitigate college preparation disparity. Ferguson was co-founder of Student Voice @ UVA, academic chair of the First- and Second-Year Councils, legislative committee member of the Student Council and student representative to the State Council of Higher Education for Virginia.

She was an intern at the U.S. Department of Energy SunShot Initiative through the Engineering School’s Technology Policy Internship Program. A Rodman Scholar, she has also received the University Achievement Award and the Alcoa Engineering Excellence Scholarship.

A graduate of the Roanoke Valley Governor’s School and Staunton River High School, Ferguson plans to pursue a Ph.D. in materials science engineering and a master’s degree in technology policy.

“I want to have the technical rigor in photovoltaics and economic chops to have an impactful career in energy policy,” Ferguson said. “I will make it my life’s work to help establish and implement the policies that promote solar energy grid integration.”

Ferguson is highly qualified to be a Truman Scholar, said James Turner, a visiting scholar in the Engineering School’s Department of Engineering and Society.

“Jill has distinguished herself for three years in UVA’s classrooms and last summer at the Department of Energy, but few have shown more leadership and commitment to use their engineering skills for the greater good,” he said. “Jill does not see problems; she sees opportunities and she has organized her peers, first on Grounds and later around the country, collectively to solve them.”

Ferguson said that while the Truman Scholarship provides her funding for her graduate education, it also provides her much more.

“It means you’re part of a family that will guide you through internship, graduate school, and career decisions to ensure that you have a positive impact,” she said. “I applied because I wanted to be a part of a community that intrinsically values interdisciplinary collaboration among passionate people who have dedicated their lives to public service and continuing Truman’s legacy of inspiring the next generation to do the same.”

In 2016, there were 775 candidates for the award nominated by 305 colleges and universities, a record number of applications and institutions. Fifty-four new Truman Scholars were selected from among 200 finalists.