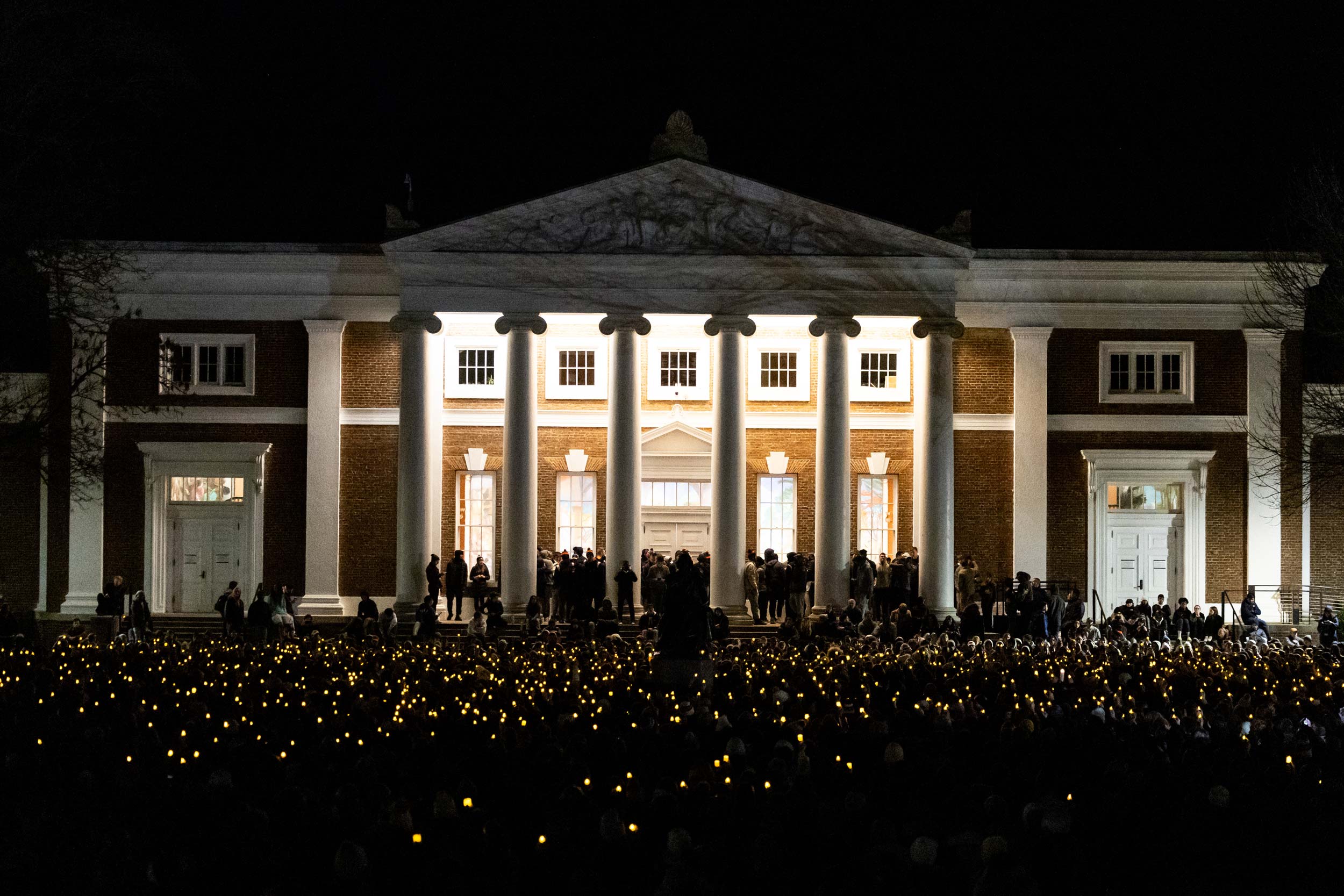 What was planned as a quiet moment where students could gather and pick up candles on Monday night became a larger, impromptu vigil with hundreds of students honoring their slain classmates. (Photo by Mike Kropf)

Students participated in a silent vigil Monday night, less than 24 hours after a gunman shot five of their classmates – three fatally – on a charter bus that had just returned to Grounds from a field trip.

The three slain students were members of the University of Virginia football team. Two other students wounded in the shooting near Culbreth Garage are in the UVA Medical Center.

The Monday gathering on the Lawn near Old Cabell Hall was meant for “quiet reflection” ahead of “a more formal, large-scale vigil … further down the line,” several student groups wrote in an email to classmates. But the crowd soon swelled to several hundred, perhaps thousands, of students. Details for later vigil were not yet available.

University classes were canceled for a second day Tuesday.

Earlier in the day, in painful detail, University President Jim Ryan recounted the Sunday night shooting and identified the slain students as D’Sean Perry, a defensive end and linebacker from Miami; Lavel Davis Jr., a wide receiver from Ridgeville, South Carolina; and Devin Chandler, a wide receiver from Virginia Beach. Ryan said Chandler was a second-year student, Davis was a third-year student and Perry was a fourth-year student.

Ryan said the bus with about 25 students aboard had returned to Grounds from Washington, where, as part of a class trip, the students had seen a play. Shortly after the bus returned to the University, the gunman opened fire inside and then fled. Police said that they did not know what, if anything, led to the shooting.

“This is a sad, shocking and tragic day for our UVA community.”

“This is a sad, shocking and tragic day for our UVA community,” Ryan said. “Let me say how deeply sorry I am for the victims and for their family and friends.”

With a gunman on the loose, University officials urged students to shelter in place, a directive that remained in place for 12 hours. About 500 students spent the night “sheltered in buildings throughout Grounds, in libraries, classrooms and other spaces” until the directive was lifted.

Just ahead of an 11 a.m. news conference, University officials lifted the shelter order, saying they were confident the wanted man was no longer in the area. And then, in a dramatic moment during the news conference, a state police captain interrupted University Police Chief Tim Longo during Longo’s remarks. The captain whispered in Longo’s ear that the suspected gunman been captured.

Light in darkness. Thanks to our students for lighting the way. pic.twitter.com/kNOPXz8Y88

Ryan identified Jones as a University student. His name is listed in the University directory as an undergraduate in the College of Arts & Sciences.

Longo said Jones would be charged with three counts of second-degree murder and using a gun in a crime. Longo said the charges could later be upgraded if “certain facts and circumstances arise.” Longo also said Jones had been the source of recent concerns.

“Mr. Jones came to the attention of the University of Virginia’s threat assessment team” first in the fall of 2022, Longo said. The chief said someone notified the Office of Student Affairs that Jones talked about having a gun. However, the chief said, the person who notified student affairs did not see a gun, and Jones’ roommate did not report seeing Jones with a gun.

“Please know we will do everything we can to honor their lives.”

Longo said Jones’ name also came up in a hazing claim, but that witnesses declined to cooperate. In the course of that inquiry, University officials discovered that Jones had been charged with a concealed-weapon violation off Grounds that the student did not report to the University, as required. Charges for that violation of the University’s Standards of Conduct were pending before the student-run University Judiciary Committee, Longo said

However, Longo said the University Police Department had no previous contacts with Jones. No one speculated on a motive, saying that was under investigation.

“This has been an unimaginably sad day for our community,” Ryan said. “The entire University community is grieving this morning. My heart is broken for the victims and their families and for all who knew and loved them.”

Ryan urged students to take advantage of counseling through Student Health and Wellness and for staff to reach out for help through the Faculty & Employee Assistance Program.

“We need to comfort and support each other and those closest to the victims of this horrendous shooting,” Ryan said.

“Please know we will do everything we can to honor their lives,” Ryan continued. “And we’ll come together soon as a community to mourn these losses.”