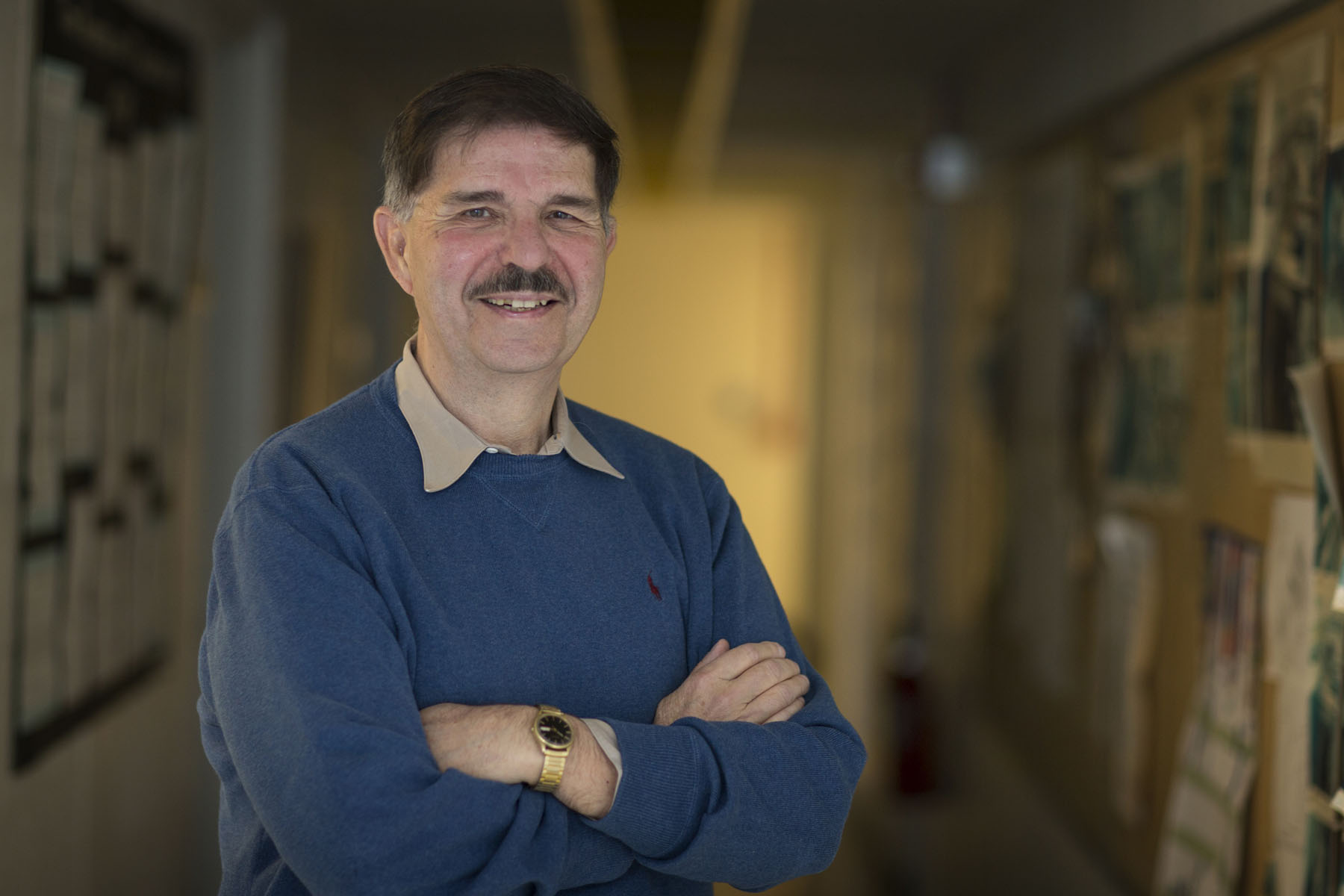 U.Va. physicist Brad Cox has been named as one of two Virginia Outstanding Scientists for 2014.

Throughout Brad Cox’s career, the University of Virginia physicist has sought answers to the most fundamental questions about the workings of the universe. As a particle physicist, he studies the essentials of matter, the unimaginably small fermions, quarks, leptons and bosons that make up atoms, which make up all things, known and unknown.

About eight years ago, he began working with his U.Va. colleagues and scientists worldwide to develop, build and operate particle detectors that eventually would be added to the highly complex $10 billion Large Hadron Collider in Europe. That massive tool, the largest scientific instrument ever built, circulates high-energy proton beams around a 17-mile underground circular accelerator, producing powerful collisions that shatter the beams into their component parts, the particles.

The experiments replicate, in effect, the conditions of the early universe.

In 2012, Cox, as a part of an international team of physicists, confirmed the existence of the Higgs boson, the particle that gives mass to all other particles and, therefore, is the glue, in essence, that holds together everything in the universe, from atoms to people.

It was one of the most important scientific discoveries in decades, proving that a long-held, over-arching physics theory, the Standard Model of Physics – used to describe the building blocks of matter and their interactions – is indeed sound and a standard on which to build other theories that possibly will be confirmed or refuted during future experiments at the Large Hadron Collider and elsewhere.

In recognition of Cox’s contributions to the search for and discovery of the Higgs, Virginia Gov. Terry McAuliffe and the Science Museum of Virginia today named him as one of two Virginia Outstanding Scientists for 2014. (The other is Paul B. Fisher, a professor of human and molecular genetics at Virginia Commonwealth University.)

“I am honored to recognize Virginia’s top science talents for 2014,” McAuliffe said. “This year’s outstanding scientists are known worldwide for their contributions in particle physics that led to the discovery of the Higgs particle and pioneering discoveries to reveal the molecular causes of cancer.”

The Outstanding Scientists Award is bestowed annually to Virginia scientists who have made significant contributions to expanding the boundaries of their fields.

Cox served for three years on a sequence of eight review committees that oversaw analysis of data from 2½ years of experiments at the Large Hadron Collider. These four-person review committees made the determination that evidence in the data was strong enough to confirm that the Higgs particle had indeed been discovered among the reams of collected data. The discovery was announced in July 2012 and was further supported in December of that year.

“Dr. Cox’s role in one of the most significant discoveries in physics of the past 50 years exemplifies the continuing importance of both individual curiosity and team collaborations in every walk of life and in every field of human endeavor,” said Thomas C. Skalak, U.Va. vice president for research. “The discovery he enabled via his work on particle detection allows us to understand the basis of all matter more clearly. This new understanding was possible by breathtaking technical advances, imaginative conceptual thinking and free sharing of information and ideas by a broad team.

“These qualities are the essence of scientific investigation and of an ethical and productive society.”

The Large Hadron Collider was activated in November 2009 after nearly two decades of planning and construction. Cox and his U.Va. colleagues were involved for years in the Compact Muon Solenoid experiment, one of the two experiments that led to the Higgs discovery.

Cox now is working on a major upgrade of the Compact Muon Solenoid electromagnetic detector for the collider. The entire Large Hadron Collider will be upgraded during the next 10 years to full power capability and is expected to produce new physics discoveries for decades.

“U.Va. physicists will be deeply involved with the new research for many years to come,” Cox said. “This Outstanding Scientist Award from the governor and the Science Museum of Virginia is a very satisfying recognition of the good work we’re doing in physics at U.Va.”

Virginia’s Outstanding Scientist of the Year program has honored Virginians each year for three decades. It is part of the Science Museum of Virginia’s mission of inspiring people to enrich their lives through science and to celebrate the innovation taking place at Virginia universities and research centers.