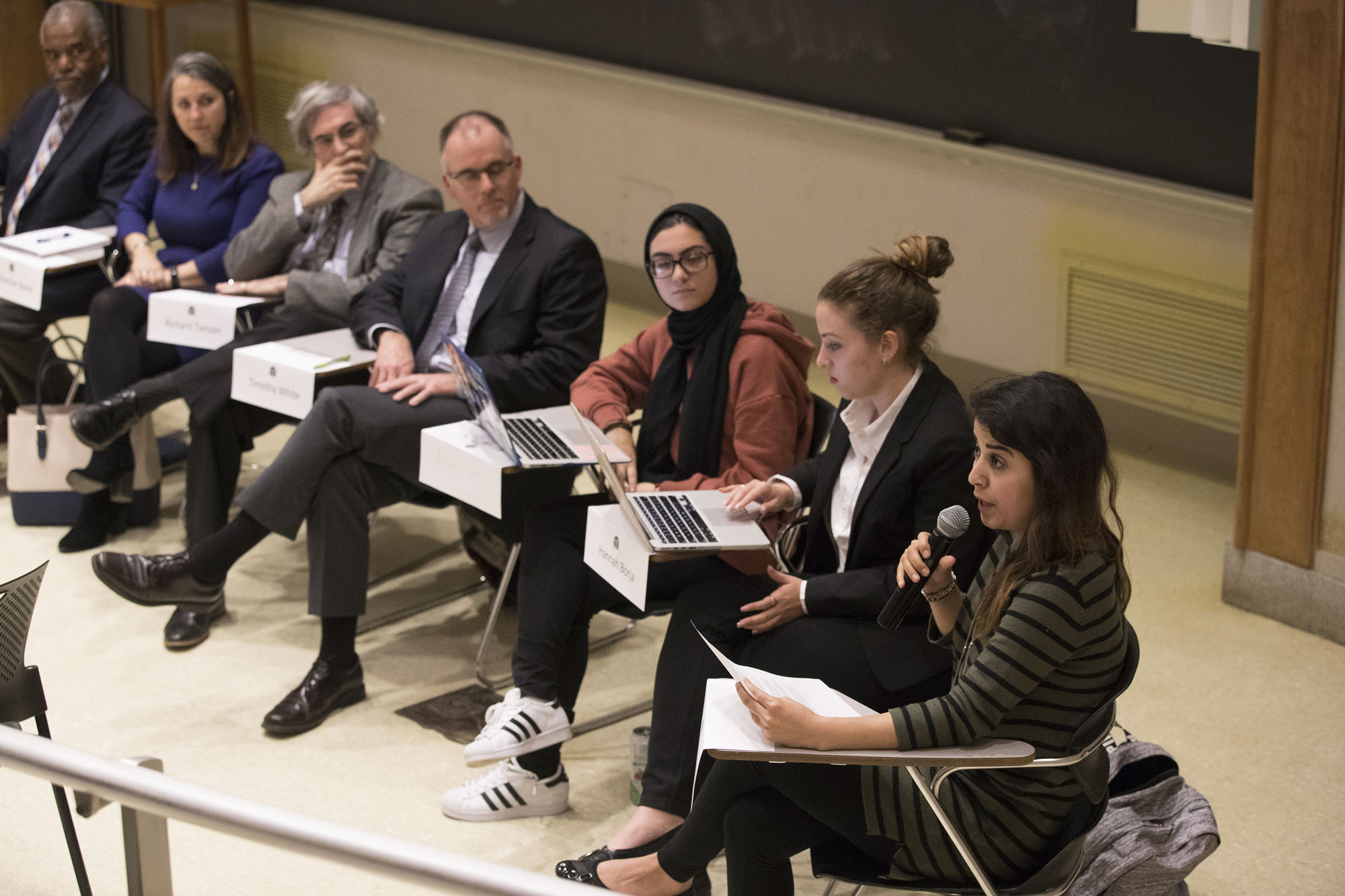 Members of the international community at the University of Virginia attended a special town hall Tuesday evening to get answers on how President Donald Trump’s temporary travel ban and other administrative actions will affect them.

Rhoads began his remarks by giving a primer on the executive order issued by President Trump at the end of January. The decision bars people from Iran, Iraq, Libya, Somalia, Sudan, Syria and Yemen entry to the United States for 90 days. The order also imposed a 120-day stop on refugees seeking entry to the country. Late Tuesday, a federal appeals court in California was considering whether to restore the Trump administration’s ban, which was recently suspended after a legal challenge from Minnesota and Washington.

“The executive order was issued with no advance notice, with very little consultation with many of the agencies in the federal government that deal with immigration matters,” Rhoads said. “Because it was issued in such a manner, it really caused a fair amount of chaos and confusion in the immigration community.”

The confusion was highlighted by the question of an audience member from Jordan, a country that is not on the list of seven enumerated in Trump’s executive order. The man told Rhoads he had friends who were travelling from his country to the United States and they were subjected to extra screening and enhanced questioning. He wanted to know why. 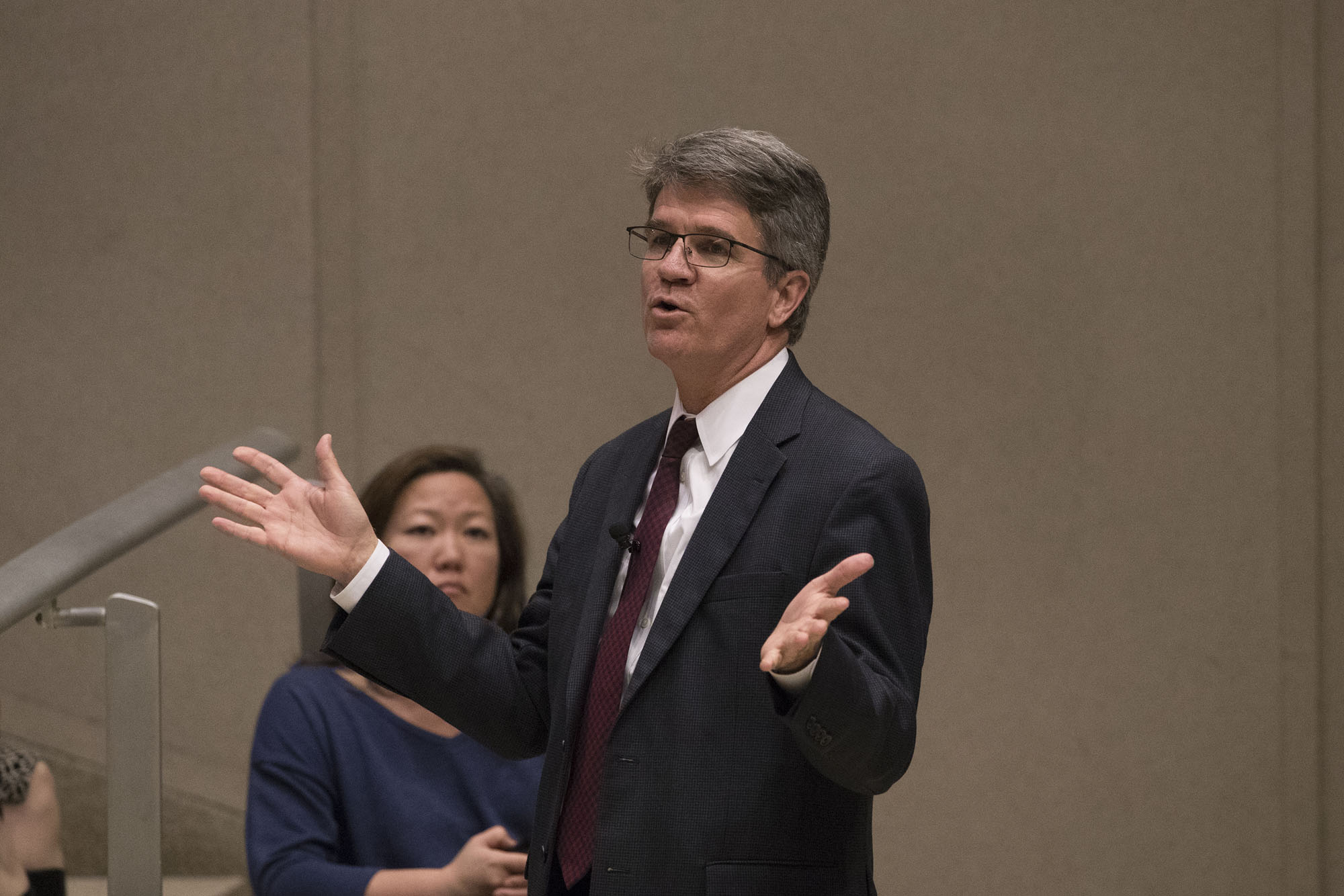 Rhoads’ answer: “Whenever you enter the United States, the immigration officer always has almost unlimited discretion to take you out of line and send you back to what they call ‘secondary inspection,’” he said. If officers believe there is any reason to ask additional questions they can base that decision on anything.

Following Rhoads’ the presentation, University leaders from global affairs, the International Studies Office, University Human Resources, student life and other areas joined the conversation. Susan Davis, special assistant in the Office of Student Affairs, said the fluidity of the situation has made students uneasy about making travel decisions, especially now that spring and summer break are near.

Uzma Zafar is a good example of Davis’ scenario. In her first year of graduate school in the Department of Anthropology, Zafar came to the town hall because of uncertainty about work coming in June. “My research was supposed to be in Pakistan, but I don’t know if I will be able to do that.” she said. “I’m just here to see what options I have.”

Rhoads had this advice to students traveling in and out of the United States: If you are traveling within the United States, students should use driver’s licenses for identification rather than passports. “You don’t want to unnecessarily incite the TSA person at the airport,” he said.

When it comes to traveling abroad, the immigration expert said people from the countries on Trump’s list should expect additional delays when they re-enter the United States. “But don’t live your life in fear. You have to live your life and part of life involves travel,” he said.

With the temporary hold on the executive order now in place, Rhoads said, “I can tell you there are people, even now, from those listed countries, who are getting visas, whose passports were held up, who are now getting their passports issued with visas, who are traveling to the United States.”

For people who have connections to the seven countries singled out in the executive order, Rhoads said they should always be prepared to answer questions. “If you traveled there, be prepared with an itinerary of what you did, who you visited. They want to make sure that you’re not going there to be radicalized,” he said, adding that it cannot hurt to have pictures of your trip.

“You need to be thinking about those things, but not necessarily hide in a closet,” he said.

This was UVA’s second town hall on immigration issues and travel since the U.S. presidential election in November.

The International Studies Office has prepared an FAQ on the action and updates the page as new developments arise. It encourages members of the University community to contact the office directly with any questions related to the travel ban.

A Year We Will Never Forget: 2019-20 in Review END_OF_DOCUMENT_TOKEN_TO_BE_REPLACED

‘What Will You Carry With You?’ Remarks From UVA President Jim Ryan END_OF_DOCUMENT_TOKEN_TO_BE_REPLACED