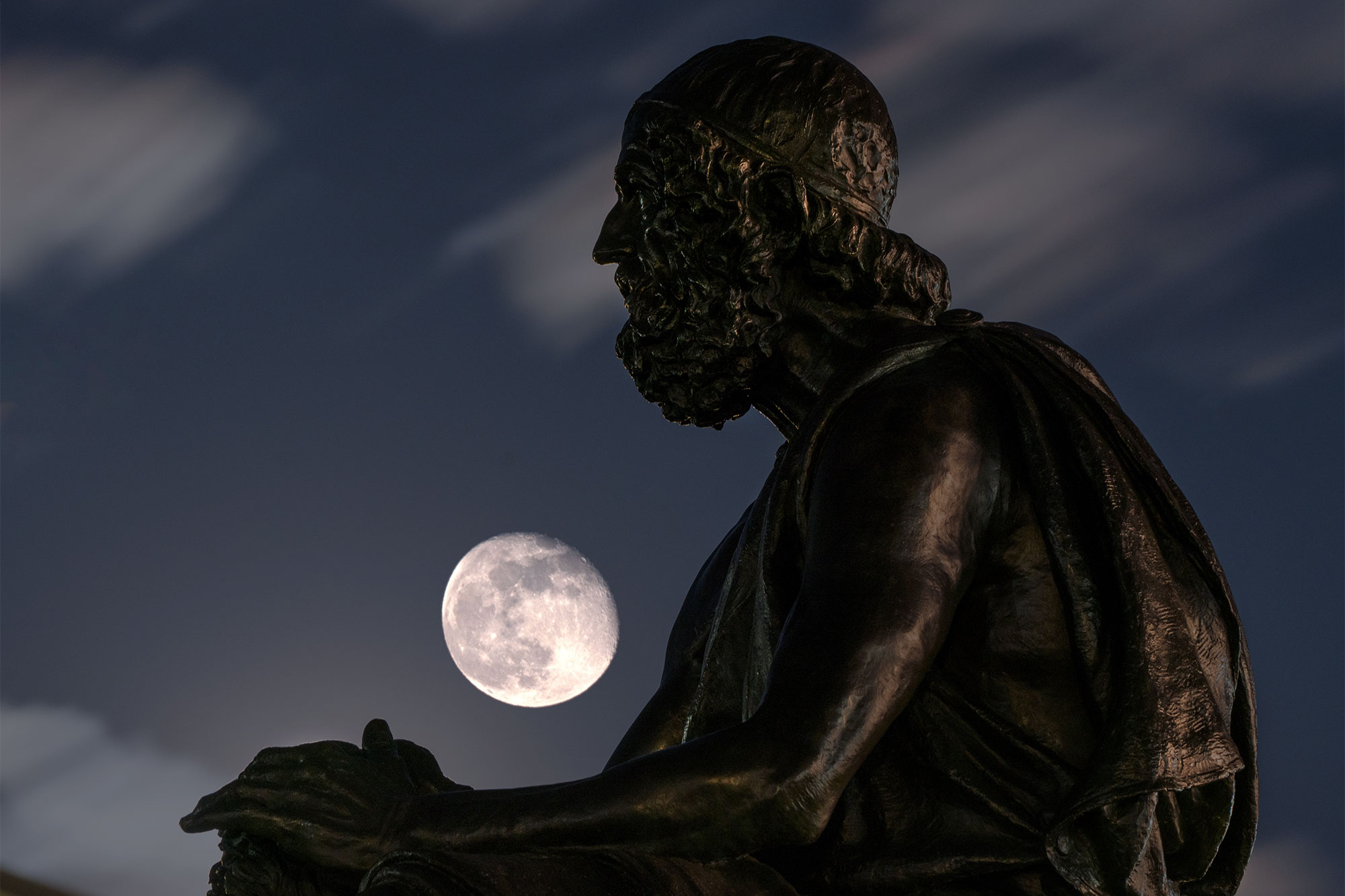 The Homer statue on UVA’s South Lawn gazes at the moon and beyond. (Photo by Sanjay Suchak, University Communications.)

Was there ever life on the moon? What about on other planets?

With the U.S. slated to blast off soon to orbit the moon – its first trip there in 50 years – the University of Virginia and NASA’s Artemis space missions seek to answer big questions like these, while pushing the scope of what can be analyzed on alien soils.

The new collaborative research will take the form of a roving, ground-level probe. It won’t be done in time for this first unmanned launch, of course. The space agency just awarded the two-year, $900,000 grant to the School of Engineering and Applied Science last week.

Instead, the technology could be part of a future mission to the moon – and perhaps beyond. The space program is also contemplating putting humans on Mars.

“The basic idea of this NASA-funded project is to obtain biological and elemental signatures, as well to detect surface morphology, to determine whether there was any life,” said engineering professor and principal investigator Mool Gupta, in whose laser lab a key portion of the technology will be created.

“Certain types of chemical composition could tell us if there was life there. And by scanning, there may be trace evidence of biological life in the form of cells.”

He added, though, that’s just scratching the surface.

The scientists want to answer a host of questions about the terrain’s overall makeup, including its subsurface, and how it has evolved. UVA’s longstanding strength in photonics will be essential.

MOCAPS To Rove and Look

Basically, he and his collaborators are constructing a scientific instrument for an autonomous  mini-rover. The optical probe’s head will look around and analyze rocks, ice and other ground samples.

The small, tube-like head will weigh less than an ounce. 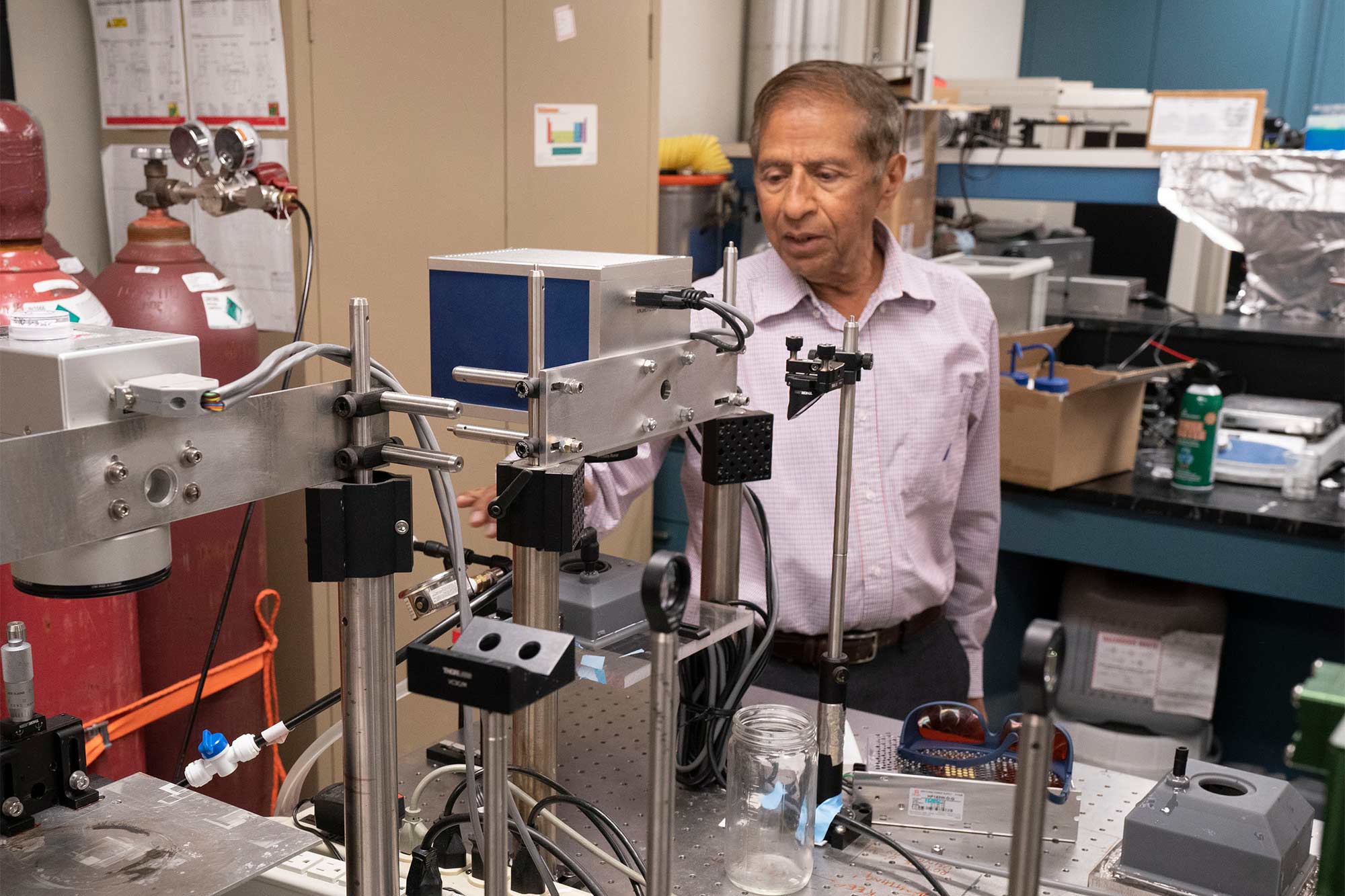 Mool Gupta stands at a station where parts of the small laser head of the rover will be developed. (Photo by Dan Addison, University Communications)

An efficient size is important in order to conserve space on the flight, and energy while there. Although the probe will roam, the rover probably won’t pick up physical objects. All the information transferred will be electronic and beamed to NASA in real time.

The head of the probe will yield the information using laser spectrometry – relying on how light scatters to identify mineral elements – and an auto-focusing lens that can take ultra-high-resolution photography at the microscopic level.

“The spectrometry would work at an extreme sensitivity level, one part per billion,” Gupta said. “This will also be the first probe to get a microscopic image, which will get you into human-hair type resolution.”

Probing the Past and Future

The moon doesn’t sustain any form of life that doesn’t bring its own adaptive technology, because there’s no atmosphere. That’s why astronauts wear spacesuits.

Research published in the journal Astrobiology in 2018 theorized, however, that conditions favorable to at least simple lifeforms such as bacteria may have existed on the moon during two periods when the Earth’s natural satellite likely did hold an atmosphere – but both were billions of years ago.

Active microbes potentially could have thrived in pools of water, for example.

Gupta said understanding past and present conditions – including knowing where life might have flourished and how it might have thrived – will be important in preparing for the future.

As a practical concern, any future moon colonists would not just need to bring extra stuff, such as a greenhouse for growing food; they would need to understand the type of soil they are working with and how its composition changes over time.

“If they sent up plants, the plants obviously cannot grow in the cold,” Gupta said. “They would have to create a balloon-type environment, and for the mineral nutrients, they would have to extract them from the soil and use them the way they need.”

But for MOCAPS, the moon won’t be an end in itself. It will also be a proving ground, a test in preparation for more challenging environments in the solar system.

Numerous details will need to be worked out as the scientists move toward proof of concept.

If successful testing happens during the initial two-year grant period, the project could acquire additional funding, and the final instrument could be complete within six or seven years, the lab director said.

Gupta, the Langley Professor of Electrical and Computer Engineering, will work with experts at two of NASA’s centers and with Hampton University; the University of Maryland, College Park; and a private industry partner, Laser and Plasma Technologies of Hampton.

The project team comprises researchers with expertise in optics and laser instrument development, as well as geology and astrophysics.

“It is a strong collaborative effort,” Gupta said. 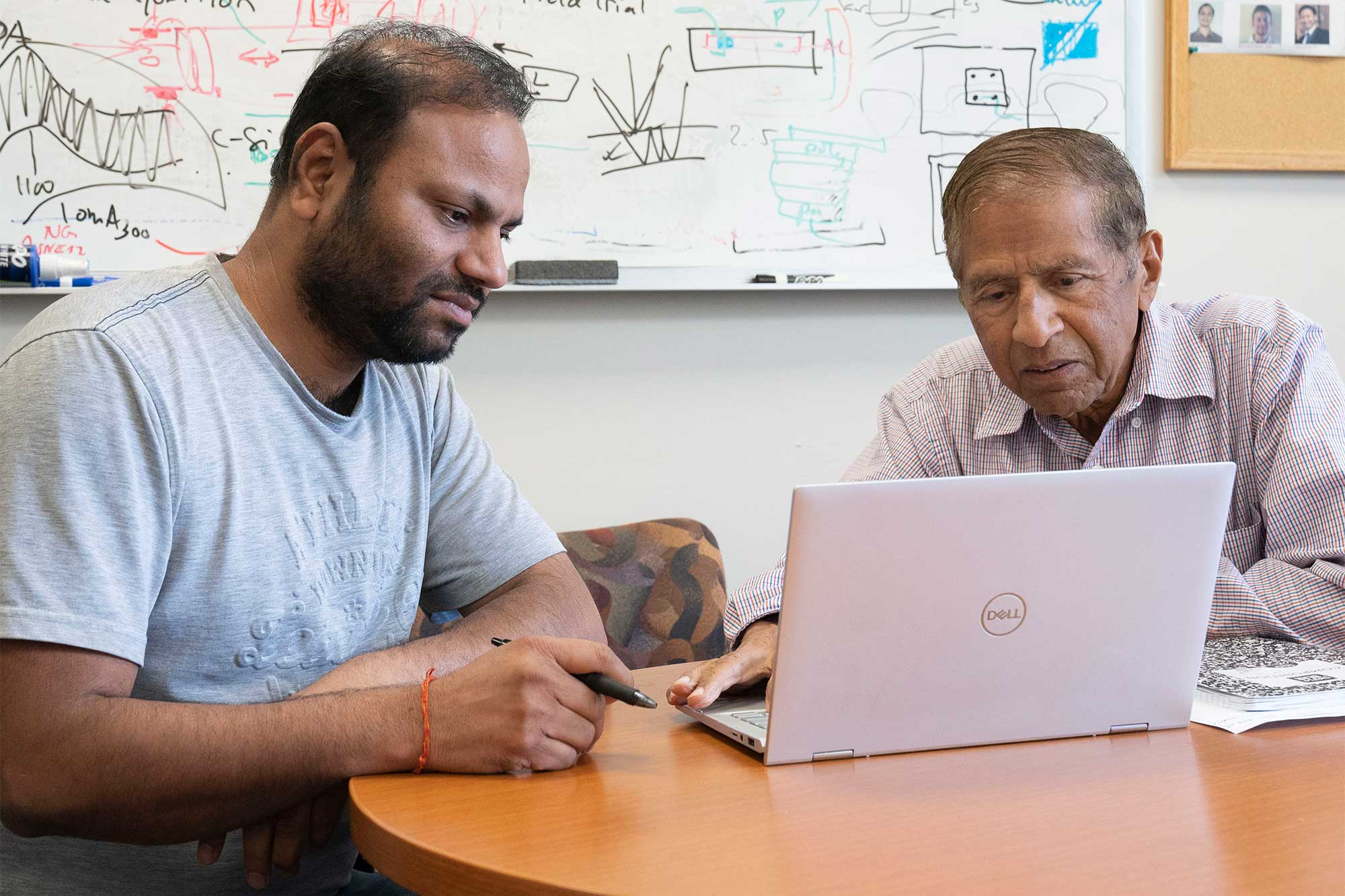 In addition to NASA, the professor’s lab is supported by the National Science Foundation’s Industry-University Cooperative Research Partnership, the U.S. Navy, and industry and other donors.

Postdoctoral researcher Pawan Kanaujia, a physicist who has been with the lab for about a year and is an expert in lasers and detection technology, said the coolness factor of learning he would be working on a NASA mission was exhilarating.

“When I got the possibility to work on this project, I thought, ‘Whoa, this is really, really interesting,’” Kanaujia said.

He reflected with awe on the idea that something he will collaborate on might one day land on Mars.

This is not the first Artemis-related project that UVA has been honored to work on. Students under Gupta’s guidance participated in the NASA BIG Idea Challenge Competition.

They demonstrated last year that energy from solar panels placed on the moon theoretically could be converted to electrical, then laser energy and transmitted long distances to power applications, such as machines working on the dark side of the moon, or in its shadowy craters.

Their findings have implications for the remote beaming of energy on Earth as well.

“Wherever you have sun, you can use solar panels. Then you can beam the energy where you need it,” Gupta said.

The group won the best poster and the best technical demonstration certificates for their work, which now awaits NASA’s consideration for further development.

On both projects, he said, being a partner in what could be the next steps of space exploration is energizing for him personally.

He excitedly watched the original 1969 moon landing in his early 20s. He plans to tune in for the Artemis launch, now tentatively planned for Friday, to witness the birth of the next series of missions. 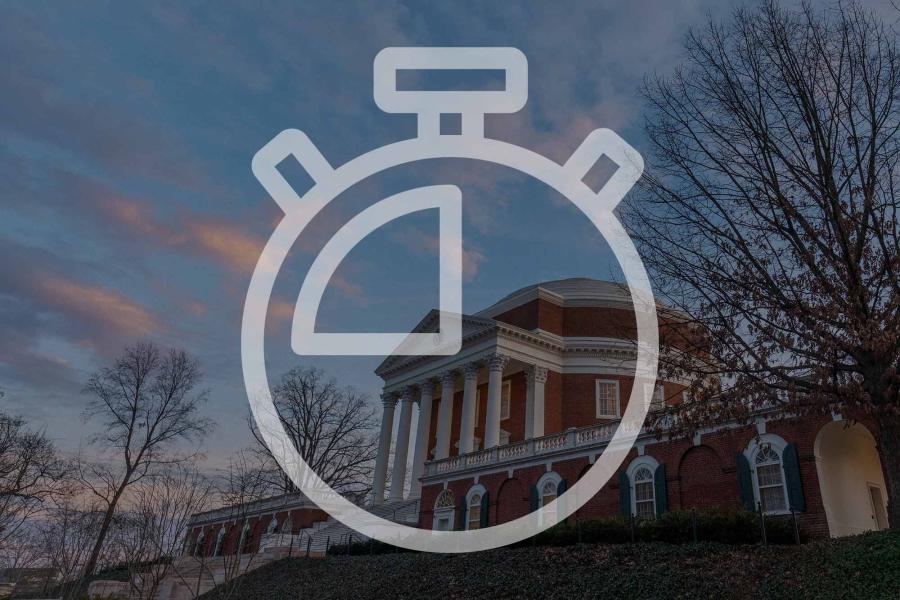 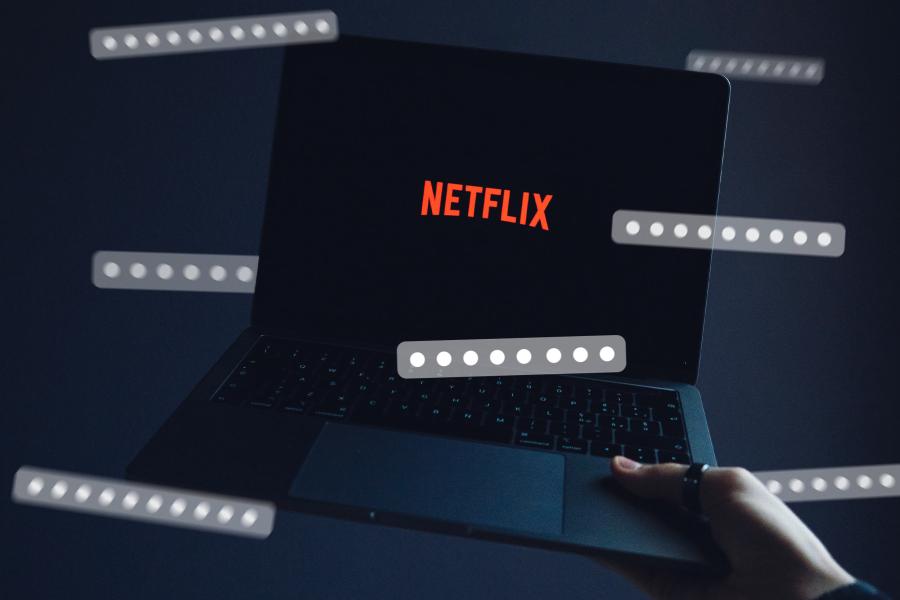