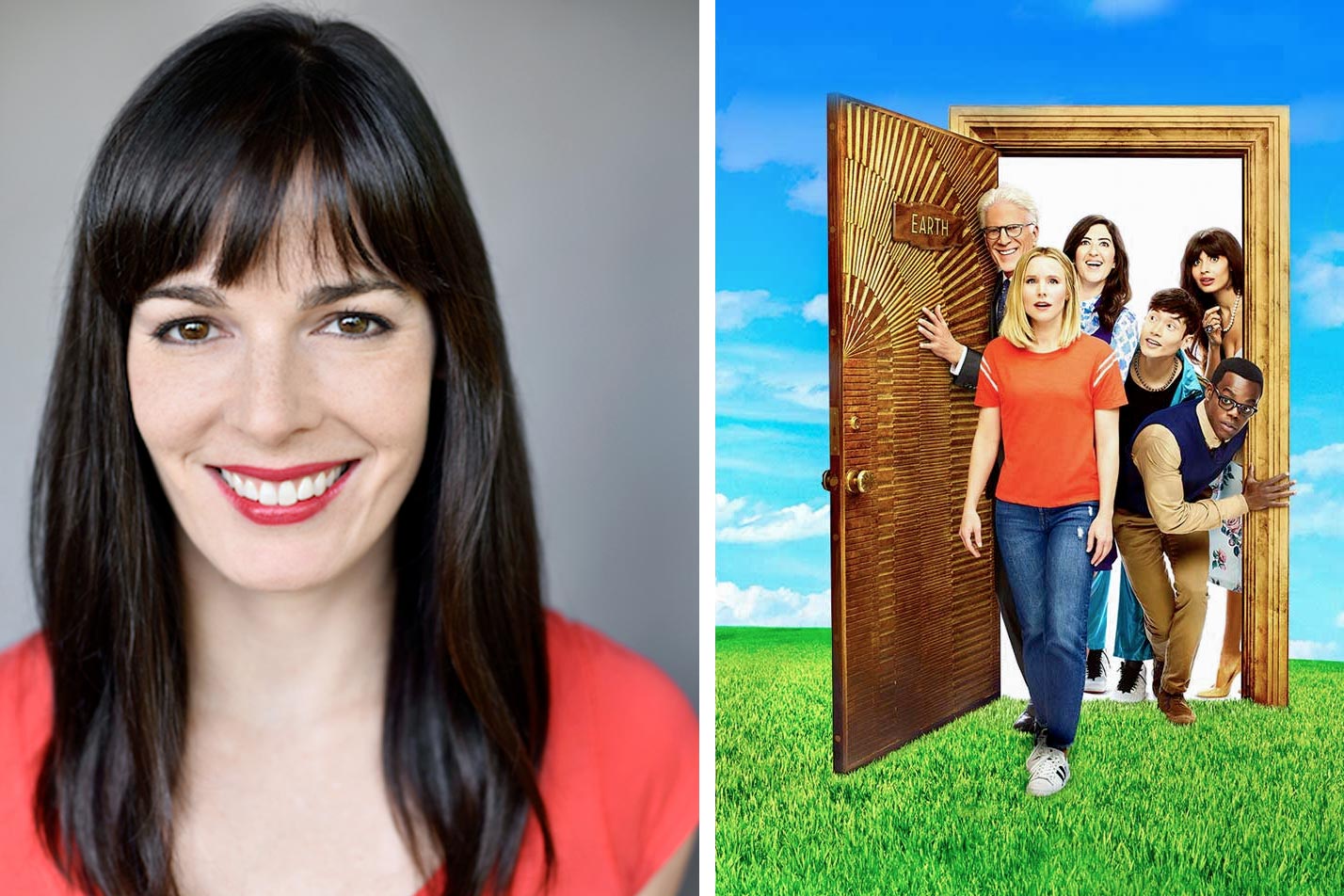 We’ll soon learn the fates of Eleanor, Chidi, Jason and Tahani, the central characters on the NBC hit comedy “The Good Place.”

The last episode of the show airs Jan. 30, and one University of Virginia School of Law alumna already knows how it ends. Kassia Miller, a 2006 graduate, was a writer and co-producer on the show for the past two seasons.

Like the characters in this story full of secrets, set in the afterlife, Miller has sworn not to give anything away. But she could confirm that the writers thought a lot about what would make a satisfying ending while also considering that “the show’s fans are really smart and like to predict what they think is going to happen.” Both broad and intellectual, the surreal comedy starring Kristen Bell and Ted Danson has run for four seasons and serves as a meditation on what it means to be a good person.

“It’s just heartwarming that people are into a show that’s about something meaningful,” Miller said.

Because she joined the show later in its run, she’s been largely insulated from the fan frenzy, she said. (Her landlords and an enthusiastic UPS delivery man are notable exceptions.)

“I’ll occasionally get nice emails from people that say they liked an episode my name happened to be on,” she said. “That’s very cool. But it’s mostly the mention of the name ‘The Good Place.’ People are very ebullient about it.”

Miller received the “written by” credit on the episodes “A Girl from Arizona” (Parts I and II) and “A Fractured Inheritance.” Yet television writing is very much a collaborative effort, she said, with writers often one-upping each other’s jokes and working together to brainstorm storylines and plot turns.

Working on a show with philosophical underpinnings added a whole other layer.

“I love all comedy, and I certainly have a blast writing on shows where the better fart joke wins, you know,” Miller said. “But when we were writing ‘The Good Place,’ we had actual philosophy professors come in to talk to us, and activists, and I was taking notes on a legal pad like I was back in school again. We really tried to address all the philosophical questions and moral stuff from an honest and genuine place.”

Miller, a Northern Virginia native who also has degrees in English and French from Duke University, got the itch for comedy, at least in part, while at UVA. She wrote sketches for the Libel Show, an annual musical-comedy performance by UVA law students.

“I always loved writing and being creative, but I never thought that would be a career for me,” she said. “I mostly applied to law school because, I thought, ‘This will delay the choice I have to make about what to do with my life.’ I think it was fated that I happened to pick the one law school that was going into its 99th year of a sketch show. It quickly became, ‘Oh, this is the thing I’m going to put my effort into.’”

After she graduated, Miller became a securities law attorney with Akin Gump Strauss Hauer & Feld in New York. Within a few years of working for the firm, however, she realized she was helping clients actualize their goals and dreams, but she wasn’t advancing her own.

She began taking writing and improv classes at the Upright Citizens Brigade on Sunday afternoons – the least likely time on the weekend that the firm might call her into the office.

As she covertly advanced up the comedy ladder, though, colleagues learned about her performances. Soon her co-workers began asking her for special requests.

“I remember at one Christmas party I somehow got talked into doing impressions of the partners in the department,” Miller said.

She saved up, quit her job and was a featured player in the improv troupe for several years. The theater didn’t compensate her financially, but the affiliation did lead to other opportunities, including her first paid writing assignment: a Cap’n Crunch infomercial. She also began to land small acting roles.

Her big break, however, came with an NBC contest to discover new talent via a pilot-writing competition. Miller submitted a script about a woman in crisis who invents an imaginary friend.

While “Imaginary Friend” didn’t live on past the pilot, her career took off. She wrote for shows such as “Trial & Error” and “The Last Man on Earth” before landing on “The Good Place,” which was helmed by influential TV showrunner Michael Schur.

Miller recently sold another pilot to NBC. This one is about adult sisters who are forced to reconnect after one of them has just weathered a national scandal.

Meet the New Cavalier on Horseback: She’s Eager To ‘Carry On a Legacy’ END_OF_DOCUMENT_TOKEN_TO_BE_REPLACED

Monkeypox Is Spreading, But University’s Risk Believed To Be Low END_OF_DOCUMENT_TOKEN_TO_BE_REPLACED

Virginia Football – For All Virginia END_OF_DOCUMENT_TOKEN_TO_BE_REPLACED