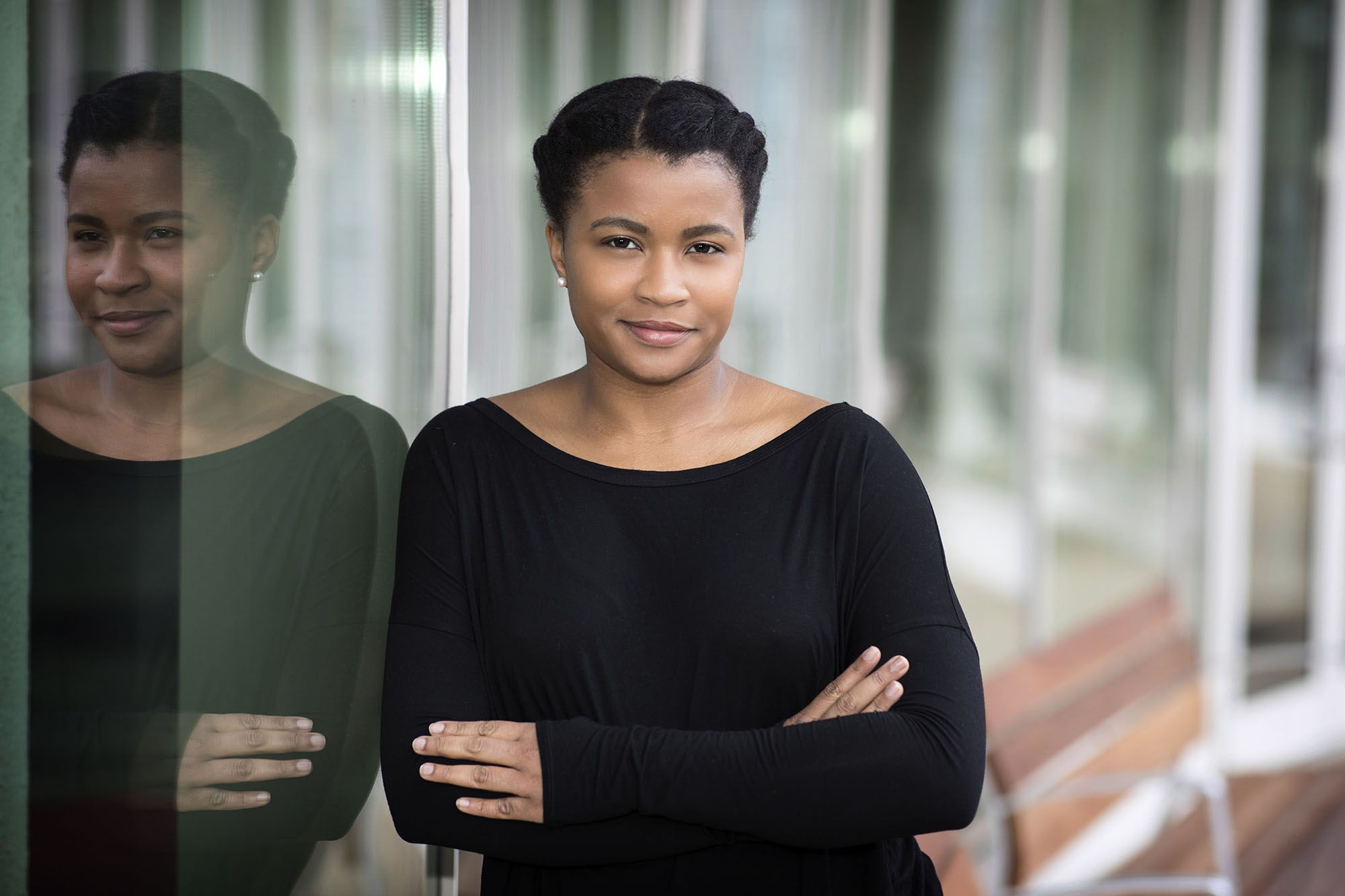 Barrett, of Nashville, a fourth-year distinguished major in English, with a minor in drama, will pursue a Master of Studies degree in English, focusing on English literature from 1830 to 1914, at the University of Oxford; as well as a Master of Studies degree in film studies at the University of Edinburgh. At UVA, she is the Farish Family Jefferson Scholar.

She is one of 46 recipients of the 2020 Marshall Scholarships.

Named for Secretary of State George C. Marshall, the Marshall Scholarship Program began in 1953 and is principally funded by the British government. The recipients are highly accomplished university students and recent graduates from across the United States who will study at leading British universities.

“The Marshall Scholarship fulfills my lifelong dream of studying in the United Kingdom,” Barrett said. “My love for the U.K. has evolved from a sort of wistful fantasy to an unwavering respect for its academic opportunities. Even though I want to end up teaching in the United States, I want to do so from a transatlantic perspective rather than an Ameri-centric one. Receiving the Marshall takes me one step closer to my career as an English and film professor.”

With the rise of globalism, Barrett sees the necessity for the next generation of academics to invest in comparative approaches such as trans-Atlanticism.

“Through engaging with Oxford’s courses and people, I will develop a more global perspective and sharpen my literary focus,” she said. “Then, as a professor, I will teach transatlantic 19th-century literature, specifically focusing on American, British and Irish literary traditions.”

Barrett said she fell in love with Irish writers while a third-year student, noticing thematic parallels in the African American and Irish literary traditions.

“Both literary traditions emphasize the importance of cultural identity and language as protest,” she said “Women writers in particular occupy an intriguing space as double minorities. I want to elevate their voices in my literary criticism.

“So much of what I read reminded me of African American literature,” she said. “James Joyce’s experimentation with language reminded me of Zora Neale Hurston’s vernacular writing; William Butler Yeats’s evocative poems reminded me of Langston Hughes’s verse; and Samuel Beckett’s avant-garde plays reminded me of Sharon Bridgforth’s genre-defying love/conjure/blues.”

“My distinguished major thesis marks my first adventure in transatlantic literary criticism and places, with ‘Iola Leroy’ [by Frances Harper] and ‘The Real Charlotte’ [by Edith Somerville and Martin Ross] at the center of its analysis,” she said. “Published around the same time in different countries by female authors, both novels upend genre conventions and character tropes of the time. My thesis explores how the novels conceive of black and Irish identities, respectively, through female protagonists.”

“I have three goals: build lifelong relationships, travel frequently, and live beyond the classroom.”

A drama minor, Barrett was Shakespeare on the Lawn’s first black director, reimagining “Romeo and Juliet” as an interracial love story set in the summer after the Rodney King riots in 1992 Los Angeles.

“Instead of casting color-blind and erasing the actors’ identities, I encouraged the actors to use their identity to inform character portrayals,” Barrett said.

Barrett is moved by narratives and appreciates the novel and dramatic literature for their storytelling capacity. She sees literary criticism, especially for the 19th century, as a way to reckon with the past in order to understand the present and prepare for the future. And she sees each paper, each project, each adventure as a step toward honing her pedagogy.

“I want to create academic spaces where intellectualism and creativity are not mutually exclusive,” she said. “I want my students to reach their full academic and creative potential. My literary criticism and coursework will challenge society and academia’s narrow view of the African American experience by encouraging students to see cultural richness in 19th-century literature.”

“Kristen was the youngest student in a room of 12, several of whom have now gone on to graduate and professional school, but she more than held her own,” Cushman said. “She quickly distinguished herself as exceptionally well-prepared, alert, thoughtful and unafraid to collide head-on with writings from the 19th century about difficult subjects from points of view remote from her own.”

For her final project in the class, Barrett wrote a play based on the Civil War stories of Ambrose Bierce.

“The results were impressive and fascinating, and they vividly reflect Kristen’s commitment to theater and performance in many contexts at the University,” Cushman said. “She [was] president of the Paul Robeson Players, the only African American theater troupe on Grounds. Accepted by the Miller Arts Scholars program as a first-year student, she was chosen as the first black director for Shakespeare on the Lawn. In turn, her involvement in theater points to Kristen’s larger commitment: she has dedicated herself to transforming theatrical spaces into places for people of color to thrive and explore, as when, for another example, she worked to produce the third annual Black Monologues on Grounds.”

Cushman called her a “trailblazer.” A Jefferson Scholar and an Echols Scholar, Barrett is the recipient of numerous other accolades at the University, including the Wagenheim Scholarship and Wagenheim Prize for Best Literary Essay. She was the first black female president of the Jefferson Literary and Debating Society in recent memory, and she is humble about her accomplishments.

“She is deeply reluctant to blow her own horn or enumerate her accolades,” he said. “Kristen Barrett spends no time grooming her reputation or primping her résumé. While working diligently to pass along what she learns in the way of stage and film directing, purposefully including underclassmen in her projects to give them experience, she serves as a tutor at the Writing Center, helps with sound and publicity for Drama Department events, and participates widely in the common life of the University of Virginia, whether Lighting of the Lawn, the Rotunda Sing or multiple events for prospective students.”

Barrett, who said she has already bonded with another Marshall Scholar from Kansas, has plans outside of the strictly academic. “I have three goals: build lifelong relationships, travel frequently and live beyond the classroom,” she said.

“I couldn’t be more pleased for Kristen,” Ashoo said. “She exudes a confidence and intention with how she is developing as a scholar and citizen, but under it all is an intellectual and social humility that I have come to appreciate very much.

“I hope she wouldn’t mind me sharing that I vividly remember our first interaction in my office. She was almost willing me to tell her she wasn’t competitive. I obviously couldn’t; she put in the hard work, and the decision went in her favor. I am proud to know her, and I look forward to following her development in the future.”

Barrett said applying for the Marshall Scholarship led to “a rediscovery of self.”

“This process started at a perfect time – when I doubted who I was as a person,” she said. “For me, this process prompted some tough questions and soul-searching that I avoided for the past few years. Now, I have the blessing of knowing myself and my aspirations, which is truly the best graduation gift.”

How a Single Email Changed a Life END_OF_DOCUMENT_TOKEN_TO_BE_REPLACED

Fall Is in the Air on Grounds END_OF_DOCUMENT_TOKEN_TO_BE_REPLACED

At UVA, There Is a Club for Everyone END_OF_DOCUMENT_TOKEN_TO_BE_REPLACED