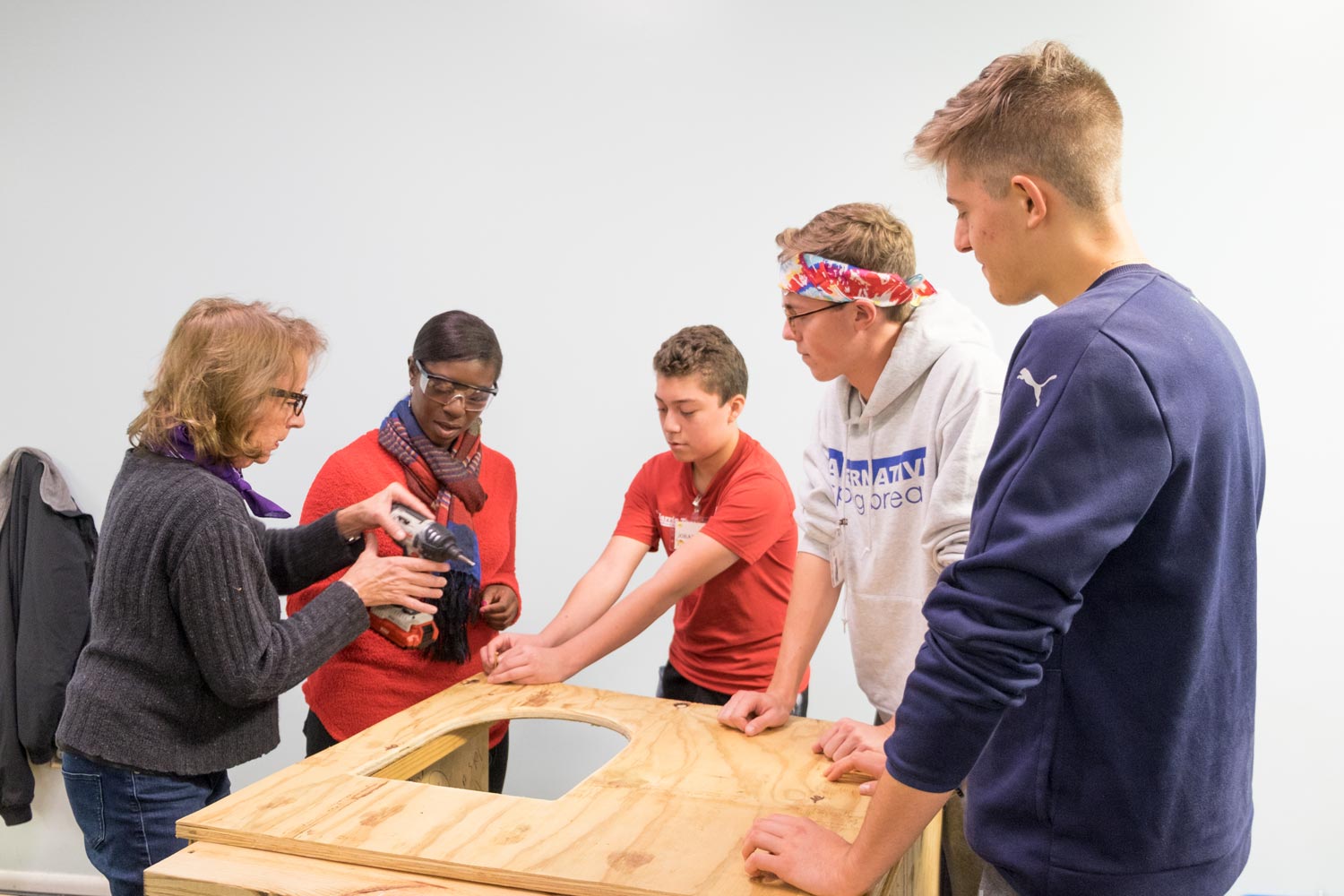 Christopher Sausa remembers how awkward it felt being a seventh-grader. He recalls feeling “stuck in the middle – not a kid, but not a grown-up yet,” and he wished he had someone to talk to. But at the time, his father felt too far removed and his younger brother wouldn’t be any help.

Now, as a fourth-year civil engineering major at the University of Virginia, Sausa is among the undergraduates mentoring seventh-grade boys through the Men’s Leadership Project at UVA’s Maxine Platzer Lynn Women’s Center.

Two years ago, one of his roommates served as a mentor (the program uses “big brother” and “little brother” to describe the relationships) and he got Sausa interested. After participating last year, Sausa found it so rewarding, he returned to the program to mentor another seventh-grade boy this year.

Yes, the Women’s Center started the Men’s Leadership Project 10 years ago – after hearing from male undergraduates that they saw how successful the center’s Young Women Leaders Program was and thought such a program was needed to mentor boys.

“At the Women’s Center, we’re committed to working for a more just and equitable world for everyone, including men,” Abigail Palko, who directs the Women’s Center, said. “Culturally, there is still a lot of work to be to done to create spaces where men can comfortably engage with what masculinity means for them individually, and we hope that MLP provides one of those spaces for its participants.” 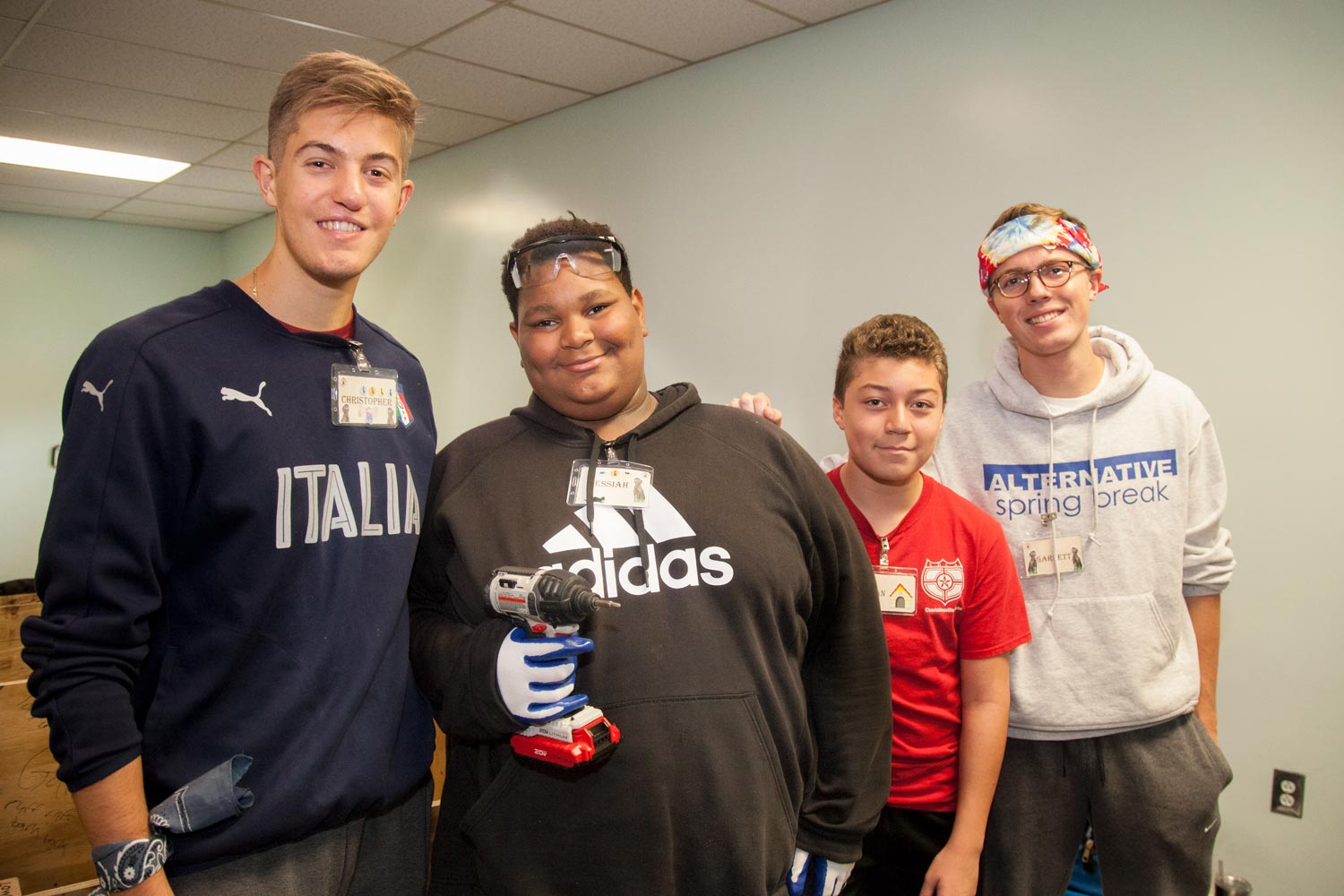 The program pairs UVA undergraduates with local middle-school boys who meet once a week after school and also get together for other activities on weekends during the school year. The number of mentorship pairs varies from eight to 14. This year’s seventh-grade mentees come from Albemarle County’s Jackson P. Burley and Jack Jouett middle schools.

Among the activities, there’s a UVA Day in the spring, when the big brothers bring their little brothers to the Grounds for a tour (parents can also attend). Sausa said they hope to plant a seed about what might be possible.

“They’re smart, but their situations don’t include thinking of college,” he said. “We want to help them to believe they can make it to college.”

The student pairings also typically volunteer on a community service project at least once a semester. Earlier this month, they built doghouses with members of the Houses of Wood and Straw organization that will donate them to house outdoors dogs in Charlottesville and nearby counties. 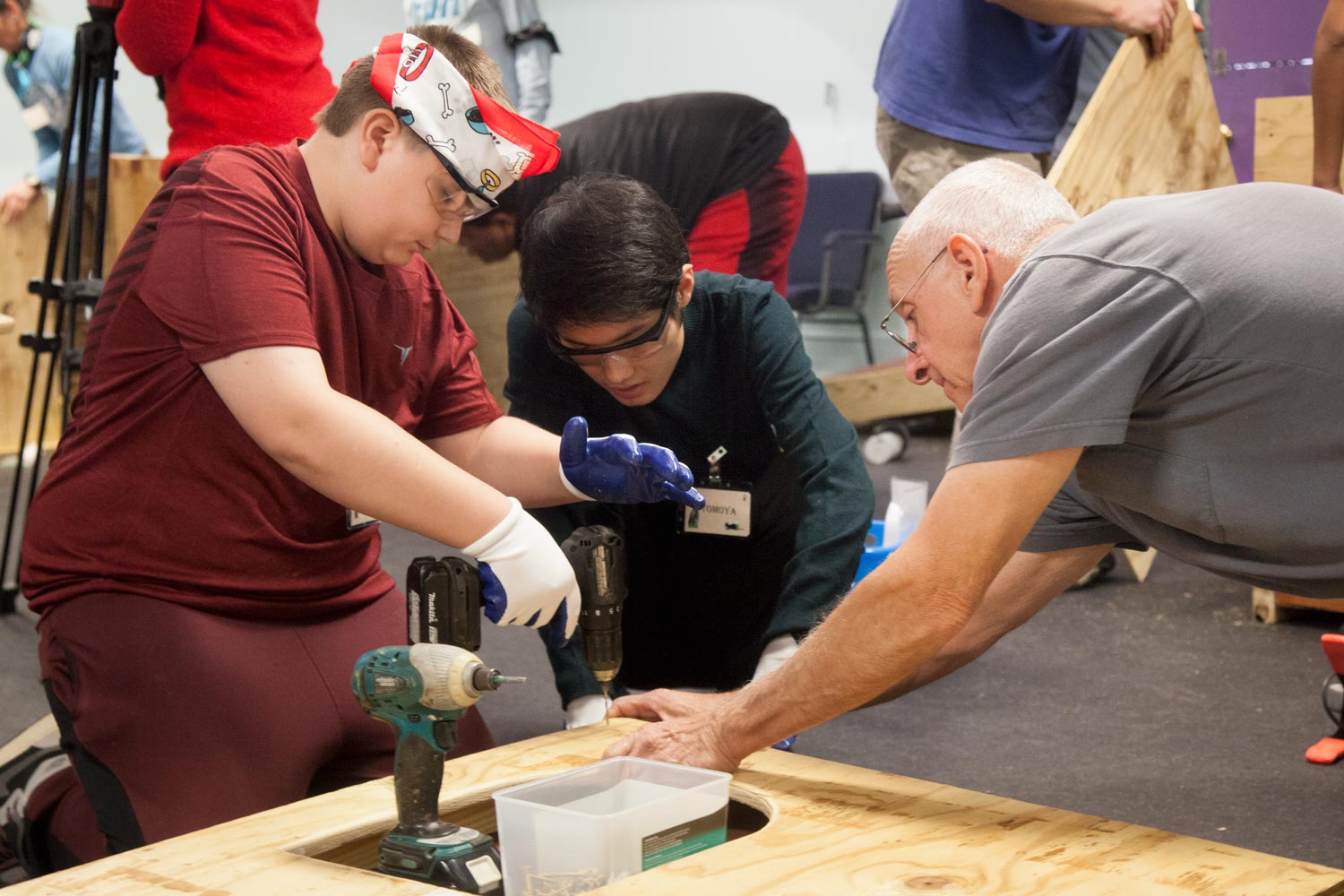 The mission of the Men’s Leadership Project when it started is just as relevant today, if not more so: to create a mentorship program that would counteract the negative traits and limiting expectations of masculinity in our society – especially its links to violent behavior, including against women – by emphasizing positive attributes.

Those positive traits? Being responsible for your actions, no matter what your age. Understanding what it means to have a sense of moral conduct. Earning the respect of your community, your peers and your family. Being a good friend, a good partner, a good father.

During the fall semester, the UVA students take a course, “Fostering Leadership in Teenage Boys,” with Peter Sheras, a professor in the Curry School of Education and Human Development, and Genevieve Brackins, MLP program coordinator at the Women’s Center, and they follow up in the spring with a short course, “Practice in Youth and Community.” The first course presents theories of adolescent development and how “to maximize effective mentoring and foster critical thinking,” as the course description says. The curriculum explores “leadership, respect, authenticity, strength, social systems and their behavioral manifestations.”

Brackins said the program “meets a widely unmet need at a crucial time in a boy’s development, when there are societal pressures for him to narrowly conform” to ideas of masculinity and a “gendered dominance that is linked to the suppression, limitation and control of children and women.”

Palko pointed out that “One outcome of the #MeToo movement is renewed attention to gender roles and the harmful ways that rigid social expectations about what a ‘real man’ looks like can impact boys and men.”

“More and more, we are understanding the price men and boys play as a result of constrictive, toxic forms of masculinity. Unhealthy relationships, physical and emotional illnesses, and more. The people they love also pay a price,” said Claire Kaplan, who leads the gender violence and social change team, which includes the Men’s Leadership Project, at the Women’s Center. She founded the program with Christopher Elliott, who then was a doctoral student in the Curry School’s social foundations program and is now assistant dean of global affairs in the McIntire School of Commerce.

The program’s goal, she said, is “to promote pro-social forms of masculinity in boys and young adults, and to help young adolescent boys get onto a healthy path in life through positive relationships with peers, with their mentors, their families, and their friends –  male, female and gender non-conforming.”

Elliott, who serves on the Men’s Leadership Project advisory board, said that although the college mentors these days have been more exposed to issues about masculinity, they haven’t necessarily had a public way to talk about it and consider positive and negative aspects as they play out in real life.

Sausa said the middle-school boys are influenced by unrealistic portrayals of young men – as if they all have that six-pack abs physique and lots of attention from girls. In the education class, he said they analyze case studies, compare myths and facts about masculinity, and discuss what’s happening in their mentoring relationships.

Getting a professional opinion – Sheras is a clinical psychologist who researches adolescence, among several topics – really helped Sausa last year when he found out that the boy who was his “little brother” at the time was cyber-bullying a girl who didn’t want to go out with him. The boy thought he was acting cool, but Sausa helped him understand his feelings and the girl’s perspective. They ended up having a meeting where the boy apologized to the girl.

“It seems simple, but the real situation can be a lot tougher,” Sausa said. He emphasized having the courage to do the right thing, especially when it’s not easy or popular. That message probably wouldn’t have gotten through if he hadn’t already developed a strong bond with his “little brother.”

“The most important things are showing you care and being consistent,” he said. “Then they’ll open up to you. You have to be genuine with the kids because they can see through it if you’re not.”

It was gratifying to see this boy change last year, Sausa said, and he could see positive development in all the boys, he said. This year, he has also noticed his mentee coming out of his shell and can see his potential.

Steve Hendrix, a school counselor at Jack Jouett Middle School who has long been an enthusiastic supporter of the Men’s Leadership Project, agreed, and said the boys really benefit from the engagement with UVA students.

“What’s really important,” Hendrix said, “is what the boys learn from the big brothers: what it’s like in college, to work hard and to give back. And to have someone to talk with.

“It’s a wonderful program and service that these college men provide. I’m impressed with them and their dedication to the boys,” Hendrix said.

A Year We Will Never Forget: 2019-20 in Review END_OF_DOCUMENT_TOKEN_TO_BE_REPLACED

‘What Will You Carry With You?’ Remarks From UVA President Jim Ryan END_OF_DOCUMENT_TOKEN_TO_BE_REPLACED