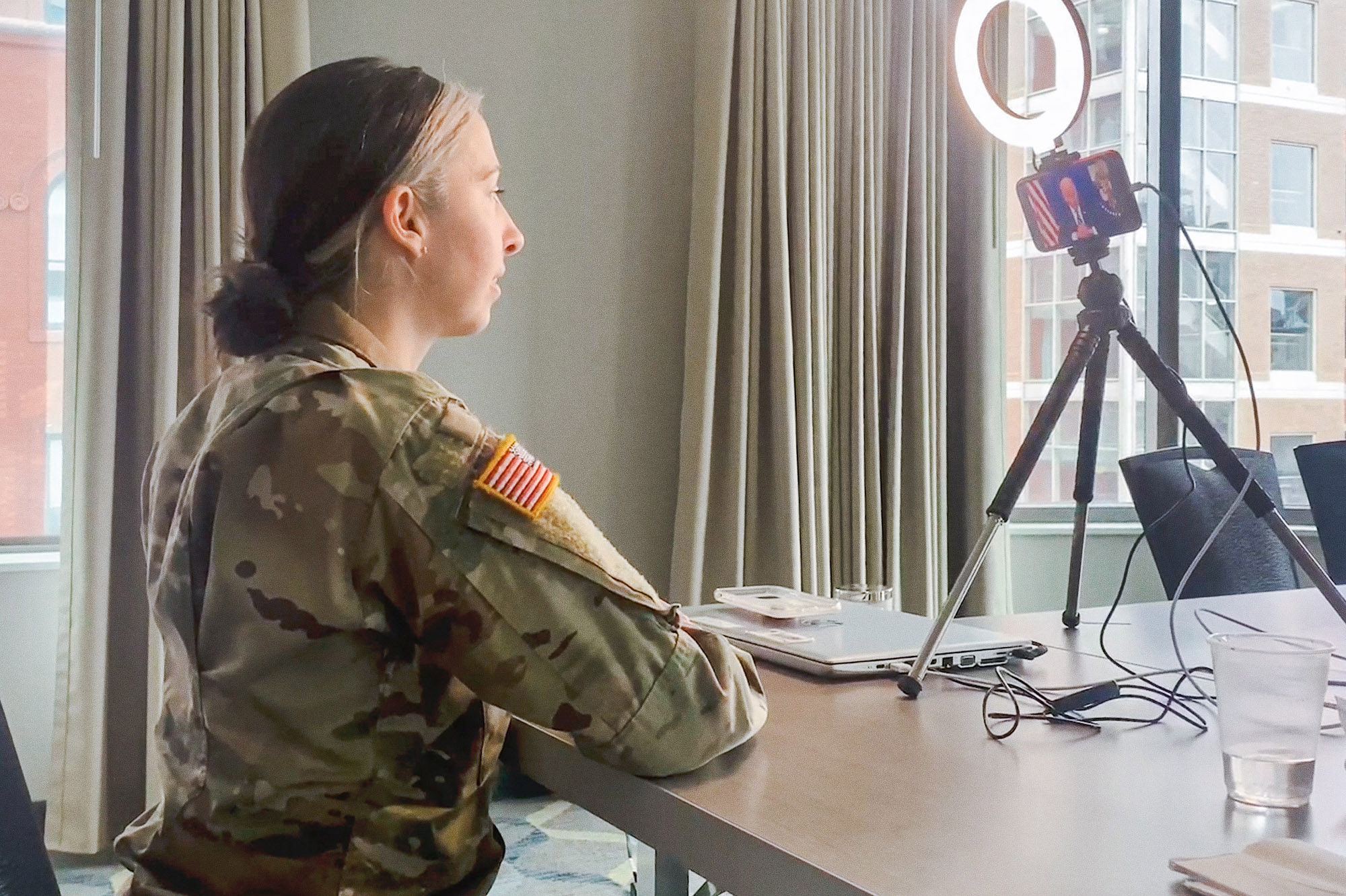 Lt. Col. Suzanne Cobleigh has had a momentous year.

The University of Virginia School of Nursing alumna is the officer in charge of one of the U.S. Army’s Medium Medical Teams, groups deployed by FEMA to support overwhelmed and understaffed U.S. hospitals strained by COVID. Her teams – made up of military nurses, doctors and respiratory therapists, mobilized for 30-day (or longer) deployments – support civilian hospitals that have applied for federal government assistance, and work alongside (not over) their civilian clinician counterparts.

Since August 2021, Cobleigh has managed teams in Little Rock, Arkansas, and Grand Rapids, Michigan, and later this spring will head to Aberdeen, Maryland, from her home base in Fort Riley, Kansas.

Earlier this month, she was interviewed by President Joe Biden about her work for Defense Flash News.

UVA Today caught up with Cobleigh, who earned a Master of Science in Nursing degree in 2019 and a Doctor of Nursing Practice degree in 2020 from the University, to learn more about her deployment. (Cobleigh’s remarks and opinions are her own, and not those of the federal government.)

Q. You’re a psychiatric mental health nurse practitioner. Is that a useful background in this work?

A. No one expected a psych NP to be in this role, but that’s really what’s needed. A lot of what I do goes back to what I learned at UVA. Professor [Ha Do] Byon and my other mentors had a way of emphasizing professionalism and evidence-based practice, key items for nurses, but with an incredible amount of psychological safety. That’s what I take with me most.

Here, where these collapsed and stressed medical systems are doing their best to adhere to top-level standards of practice but are working under crisis – we can’t do what we want to do because of shortages of supply chain, staffing, you name it – I bring psychological safety to my teams and support them by listening – really listening – to what they’re going through.

In the Army, we usually have a very tight hold on our people: it’s not just a job, but a lifestyle, and everything is impacted by it. But I go into the civilian community offering them autonomy first – “I know you’re an adult, and I’m not going to micromanage. But I am going to come around and check on you to make sure you know I’m here for your career and wellness first” – so they feel like they can “adult,” and I’m someone who’s there for them.

Q. How are the clinicians you work with coping?

A. There’s a lot of dark humor in the medical arena: it’s how we manage. There’s a lot of resignation, too, because there’s no end in sight. Any moments we have, we’re chatting, checking in. We remind one another that we can get through almost any trauma if we band together, whatever it takes. So it’s “I’ll take your patient while you use the bathroom and have a snack, or while you tap out and go walk the hallways.” Other things are out of our control, but we are working together and supporting one another.

And it’s working. I always ask my staff, if we get extended again, if they want to switch floors or change shifts, and the feedback I keep getting is, “No, I fit.” That’s psychological safety. If you find it in yourself to form genuine friendships, you become sisters and brothers for life, and it is important that military and civilian counterparts know and understand each other.

A. He’s a real, real person. He talked about when he was in the hospital with his son [Beau, who died of brain cancer in 2015], how it was the nurses who kept him going. He sees what nursing brings to the table; he knows we just want to be seen. “Nursing is the most undervalued profession,” he said, “and we need to do everything we can to show people what you do.

“Doctors diagnose and do tests, but nurses make you want to live,” he said.

Q. He said he wanted a “frank and honest conversation with clinicians on the ground.” What did you share with him?

A. I talked about how much the COVID environment has changed. While I was in Arkansas, we knew when delta hit it’d strike the immune-compromised, and now you’ve got omicron on top of delta, and it’s breaking through to our staff, who’re already worn out, and quitting the profession because the system has been overloaded for so long. I used the words “collective trauma”; whether we’re civilian or military clinicians, we want our patients to be healthy, and don’t want our nation to be going through this.

People need genuine support from administrative leaders who aren’t clinical, recognition that they need to take breaks, that they need places with psychological safety, that everyone’s doing the best they can with what they have. It goes back to asking nurses, RTs, physicians, “What do you need? Where’s your heart right now? What has someone or something taken from you that I can give back?” Those down-to-earth questions help before they [clinicians] lose compassion totally and completely: that’s the message I want to give.

Q. How do you keep yourself going?

A. For me, it goes back to my education, that it is absolutely possible and absolutely necessary in nursing to have empathy for every person you come into contact with … your peers, senior leaders in the hospital, the physicians you work with, and especially your patients.

That was something I learned being in Charlottesville and doing clinical rotations at UVA Health during the Unite the Right rally [in 2017]. I watched clinicians respond to people who participated in violence, and really took something from that. Empathy is not endorsement. I may not endorse what you’ve chosen to do, but if I’m going to stand on my own two feet with my ethical and moral compass intact, I have to choose empathy. No one’s taking that from me.

I also want to emphasize that true empathy also means setting boundaries about what is appropriate and what is not. [There is] interprofessional abuse within health care and abuse against health care workers from the public. We have the mechanisms to keep these destructive behaviors at bay. True empathy for all of our fellow humans must include having the moral and political will to strictly enforce those mechanisms at every level of health care.

It’s impossible to separate the division in our country from the struggles that the medical and nursing world are now going through. We all bring a certain set of values to the table; when I walk away from conversations with almost anyone – whether it’s President Biden or my uninsured patient – we have to remember we’re all human. I’m going to treat you like one. If you want to tell me your dearest-held values, even if I disagree with them, fine: you’re still one of my humans. I have to have that mentality, or else lose who I am.

Q. Has your job ever been this hard?

A. It’s funny; I did ROTC at the University of Vermont, where I earned my undergraduate nursing degree, and was commissioned into the Army Nurse Corps two weeks before 9/11. Then in early 2020, I was literally the first and then last person at UVA School of Nursing to present my DNP scholarly project in person, just moments before UVA closed. I’d finished most of my presentation that day when my committee said, “I’m so sorry, Suzie; we have to shut this down.” There wasn’t even time for questions. When COVID struck, it was like Groundhog Day: another major national crisis.

What’s Next for UVA’s Class of 2022? END_OF_DOCUMENT_TOKEN_TO_BE_REPLACED

How Affordable is UVA? END_OF_DOCUMENT_TOKEN_TO_BE_REPLACED