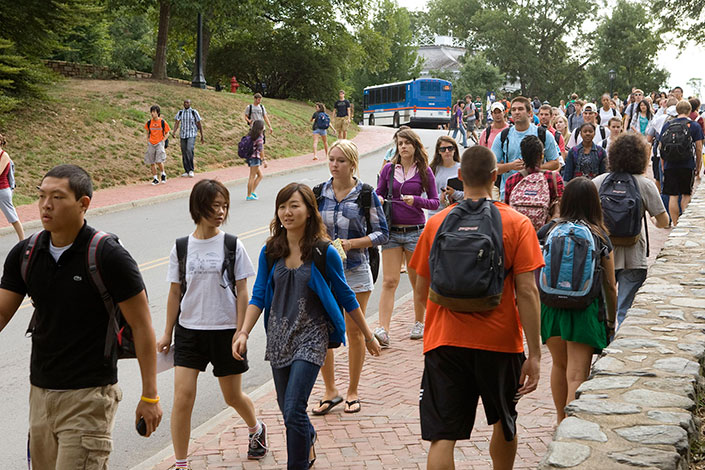 The University of Virginia will participate in an April sexual assault campus climate survey, sponsored by the Association of American Universities and administered to students at 29 institutions of higher education.

The survey aims to help institutions and policymakers better understand issues related to sexual assault as they expand efforts to prevent it and respond appropriately, and to assess students’ knowledge and perceptions of safety and support.

“The University of Virginia looks forward to participating in this important climate survey,” U.Va. President Teresa A. Sullivan said. “The questions have been validated in previous research, and the results will provide important baseline data to inform our decision-making as we continue our proactive efforts to keep the University safe and to eliminate sexual assault.”

In addition to U.Va., 27 other public and private U.S. research universities drawn from the AAU’s 60 members will offer the survey to students, as well as one non-member college. Combined, the schools enroll more than 800,000 undergraduate, graduate and professional students, making the survey among the largest of its kind ever conducted. Respondents’ confidentiality will be protected.

“We are pleased that we will be able to conduct a climate survey involving so many universities and students from every region of the country,” AAU President Hunter Rawlings said. “We have an excellent cross-section of our institutions – about half public and half private, rural and urban, with a range of sizes.”

A team of university professionals, chaired by Sandra Martin, a sexual violence researcher at the University of North Carolina, Chapel Hill, will work with the research firm Westat to design and administer the survey.

The team will use an instrument suggested by the April 2014 White House Task Force to Protect Students from Sexual Assault as the basis for the survey. Each school will be able to add five questions about its own specific programs and resources.

The survey will assess campus climate and seek information about the occurrence of and response to sexual assault and sexual harassment, making it possible to compare data nationally.

AAU will release aggregate results publicly. Most of the AAU universities not using the survey are conducting their own surveys or participating in state system efforts.

“Our first priority, and theirs, is to ensure that students not only are safe, but feel safe,” Rawlings said. “Universities will be using their own data to inform their own policies and practices regarding sexual assault. We also hope the survey will help policymakers gain a better understanding of the problem, and that it will make a significant contribution to the growing body of research on sexual assault.”

Do You Know the History of Your Favorite Corner Spots? END_OF_DOCUMENT_TOKEN_TO_BE_REPLACED

Netflix to Add Ads. Why This Could Be a ‘Game-Changer’ for Your Viewing Experience END_OF_DOCUMENT_TOKEN_TO_BE_REPLACED

What’s Next for UVA’s Class of 2022? END_OF_DOCUMENT_TOKEN_TO_BE_REPLACED