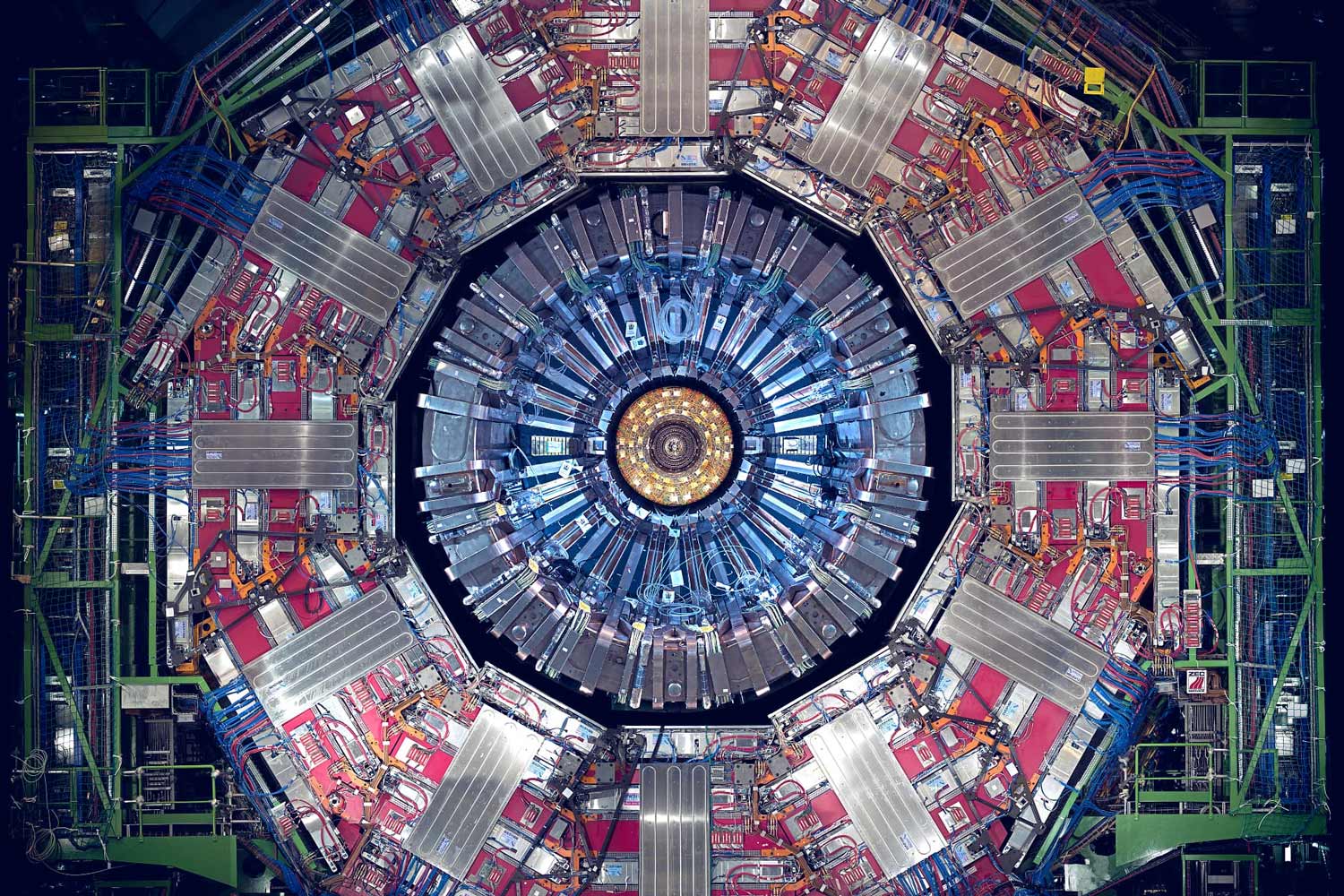 A particle detector at the Large Hadron Collider in Europe. UVA physicists have been involved with projects there since it was built, and have contributed instruments built at UVA. (Photo courtesy of CERN)

University of Virginia physicists have recently played key roles in new particle physics discoveries. The scientists are involved with large international collaborations using major facilities designed for expanding our knowledge of the most intimate details of how the smallest known pieces of atoms may have given birth to the universe.

The research projects are led at UVA by physicist Craig Dukes, working with the U.S. Department of Energy’s Fermi National Laboratory in Illinois; Chris Neu, who works with the Large Hadron Collider in Europe; and Kent Paschke, who works with the DOE’s Thomas Jefferson National Accelerator Facility, or Jefferson Lab, in Newport News.

Dukes, Neu and their teams are part of UVA’s High Energy Physics Laboratory, which is dedicated to answering fundamental questions involving the makings of everything. The work is “high energy” because it requires huge electronic devices to create controlled collisions between protons, designed to break them apart and expose their constituent particles, or to travel lengthy distances and undergo changes as they go. Paschke, who also is in the UVA Physics Department, focuses on projects with Jefferson Lab.

All of the experiments require high-powered, big-data computers and computing techniques to help researchers glean understanding in extreme detail made from billions of particle interactions.

For the first time, scientists have measured the direct interaction of the Higgs boson (sometimes called the “God particle”) with another type of heavy particle called “top quarks.” The Higgs boson, which was theorized in the 1960s and creates a field through which all other matter exists, was famously confirmed in 2012 by experiments at the Large Hadron Collider near Geneva, Switzerland. UVA researchers played key roles in that discovery.

This linkage between the Higgs and top quarks is important because, in theory, particles gain their mass by interacting with the Higgs field, and mass is needed for things to exist. This is a fundamental part of the Standard Model of Physics, which attempts to explain how elementary particles – the particles that make up the very universe – operate. It has long made sense to physicists that Higgs particles and top quarks would interact, but it needed to be proven.

Through a long series of experiments at the Large Hadron Collider, scientists have proven that indeed they do. Neu, a longtime UVA professor of physics, and his team played a major role in the discovery, published recently in the prominent journal Physical Review Letters.

“Scientists needed precise theoretical predictions for the characteristics of background processes as well as the development of powerful data-analysis methods which use machine learning to teach a computer to distinguish signal events from background,” Neu said. “UVA students and postdocs have been working on both these vital aspects of the analysis over the last seven years.”

Neu noted that the finding is an important step in furthering the understanding of the Higgs boson and its role in interactions between other particles, but noted there still is plenty of room for discovery of currently unknown phenomena.

“In the coming years, much more data will be collected and the precision will be improved, in order to see if the Higgs reveals the presence of physics beyond the Standard Model,” he said. “This is exciting because we know that the Standard Model is an incomplete theory; if we are ever going to understand, for instance, the nature of dark matter, it could come from finding a discrepancy in what we observe regarding the Higgs compared to the commonly accepted prediction of what might be happening.”

For more than three years, scientists have been observing particles called neutrinos as they oscillate from one type to another over a distance of 500 miles. In a massive $300 million project at Fermilab called NOvA, the purpose is to discover more about neutrinos – ghostly and abundant particles that travel through matter, mostly without leaving a trace.

It’s important because the universe, in its present state, is a result of particle interactions that occurred in the first seconds after the Big Bang nearly 14 billion years ago.

The experiment’s long-term goal is to look for similarities and differences in how neutrinos and antineutrinos change from one type – in this case, muon – into one of the other two types, electron or tau. Precisely measuring this change in both neutrinos and antineutrinos, and then comparing them, will help scientists unlock the secrets that these particles hold about how the universe continues to operate at its smallest level – the level that composes the big things: galaxies, stars, planets, beer.

Now, researchers, including a group led by UVA physics professor Craig Dukes, have seen strong evidence of muon antineutrinos oscillating into electron antineutrinos, a phenomenon that had never been unambiguously observed.

NOvA uses two large particle detectors – a smaller one at Fermilab in Illinois and a much larger one 500 miles away in northern Minnesota – to study a beam of particles generated by Fermilab’s accelerator complex and sent directly through Earth, no tunnel required (neutrinos travel essentially unimpeded through matter).

The key to NOvA’s science program is comparing the rate at which electron neutrinos appear in the far detector with the rate that electron antineutrinos appear. A precise measurement of those differences will allow NOvA to achieve one of its main science goals: to determine which of the three types of neutrinos is the heaviest and which the lightest, all part of the quest to puzzle out the hows and whys of existence.

Some of the detector instruments at Fermilab were designed and built at UVA’s High Energy Physics Lab.

The Weak Side of the Proton

A new result from a large experiment at the Thomas Jefferson National Accelerator Facility provides a precision test of the “weak force,” which, while weak-sounding, is one of four fundamental forces in nature. The finding, published in the journal Nature, provides a window to potential new particles that might be further explored at the Large Hadron Collider.

While the weak force is difficult to observe directly, its influence can be felt in our everyday world. For example, it initiates the chain of reactions that power the sun, and it provides a mechanism for radioactive decays that partially heat the Earth’s core – and that also enable doctors to detect disease inside the body without surgery.

Now, the researchers, including Paschke and his UVA collaborator, physicist Gordon Cates, have revealed one of the weak force’s secrets: the precise strength of its grip on the proton. They did this by measuring the proton’s weak charge to high precision, which they probed using high-quality beams available at Jefferson Lab’s Continuous Electron Beam Accelerator Facility.

The proton’s weak charge is analogous to its more familiar electric charge, a measure of the influence the proton experiences from the electromagnetic force. These two interactions are closely related in the Standard Model, which describes the electromagnetic and weak forces as two different aspects of a single force that interacts with subatomic particles.

To measure the proton’s weak charge, an intense beam of electrons was directed onto a target containing cold liquid hydrogen, and the electrons scattered from this target were detected in a precise, custom-built measuring apparatus. The key to the experiment is that the electrons in the beam were highly polarized – prepared prior to acceleration to be mostly “spinning” in one direction, parallel or anti-parallel to the beam direction. With the direction of polarization rapidly reversed in a controlled manner, the experimenters were able to latch onto the weak interaction’s unique property of parity (akin to mirror symmetry) violation, in order to isolate its tiny effects to high precision: A different scattering rate by about two parts in 10 million was measured for the two beam polarization states.

The proton’s weak charge was found to be in excellent agreement with predictions of the Standard Model, which takes into account all known subatomic particles and the forces that act on them. Because the proton’s weak charge is so precisely predicted in this model, the result provides insight into predictions of thus far unobserved heavy particles, such as those that may be produced by the Large Hadron Collider or future high-energy particle accelerators.