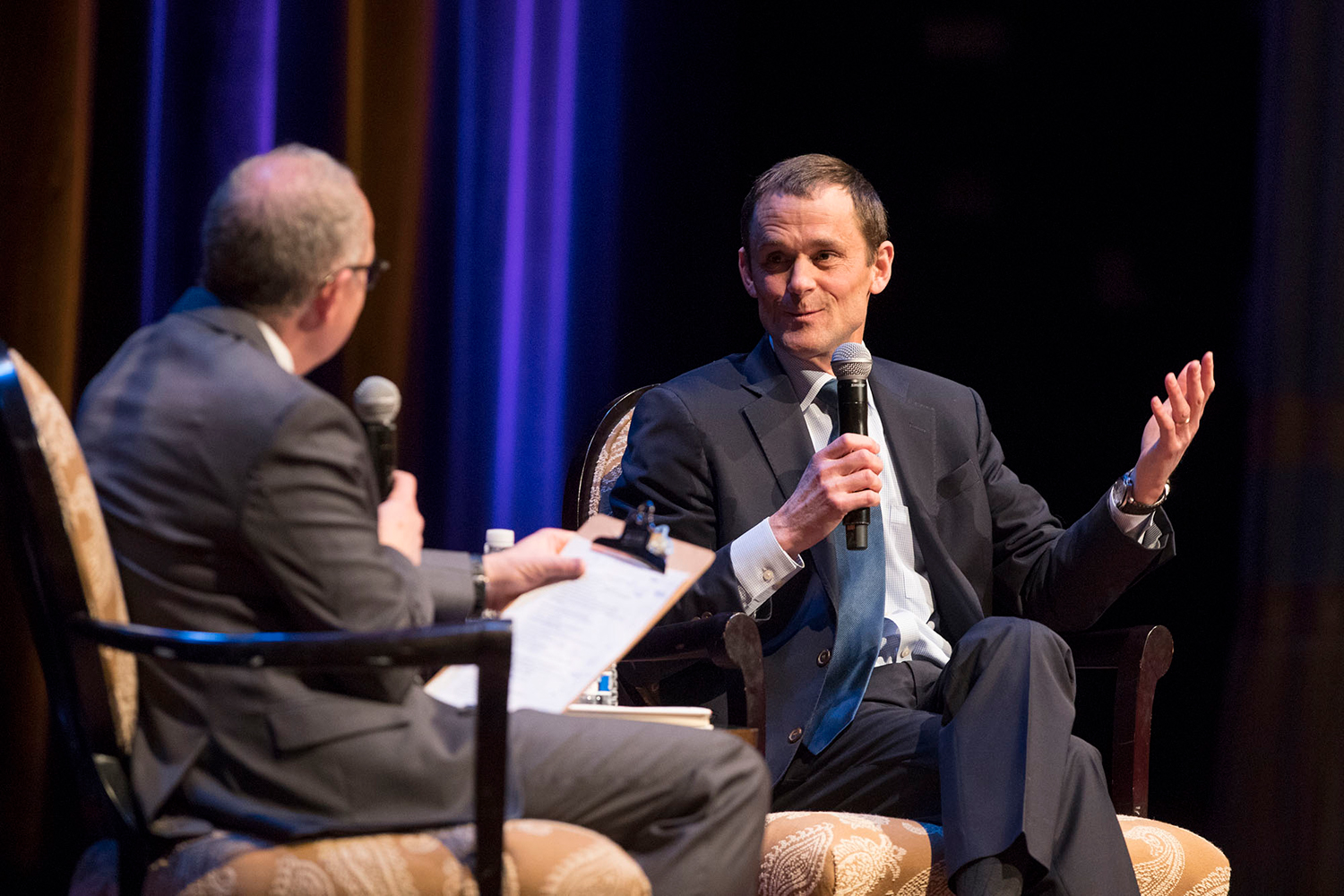 James E. Ryan, president-elect at the University of Virginia, participated in two endurance events on Saturday: the Charlottesville 10-Miler race in the morning and a marathon of questions and answers that afternoon. The latter came in the form of a full house at the Paramount Theater as part of the Virginia Festival of the Book.

Ryan took on “Life’s Essential Questions” – the title of his 2017 book and the event – and many others while in conversation with his friend and running coach, Mark Lorenzoni, who owns the local Ragged Mountain Running Shop with his wife, Cynthia.

The title comes from Ryan’s 2016 commencement address to graduates of Harvard University’s Graduate School of Education, where he currently serves as dean,  which went viral. In the spring of 2017, he published it as a book, “Wait, What? And Life’s Other Essential Questions,” at the urging of a HarperCollins editor, and it quickly made the New York Times bestseller list.

In “Wait, What?” Ryan describes the art of asking good questions, and distilled them to five essential ones, describing how they lead to better answers. Using examples from politics, history, popular culture, social movements and his own experience, he shows how good questions can create deeper understanding and stronger connections among people. Ryan’s seemingly simple questions offer paths to thoughtful deliberations for readers of all ages.

Lorenzoni asked Ryan questions such as how “Wait, What?” came to be published, in what ways it has changed his life and what experiences have been defining moments in his life.

In one revealing segment of the event, Lorenzoni told Ryan to put on his running shoes and see how many questions he could answer in five minutes while walking laps around the stage. 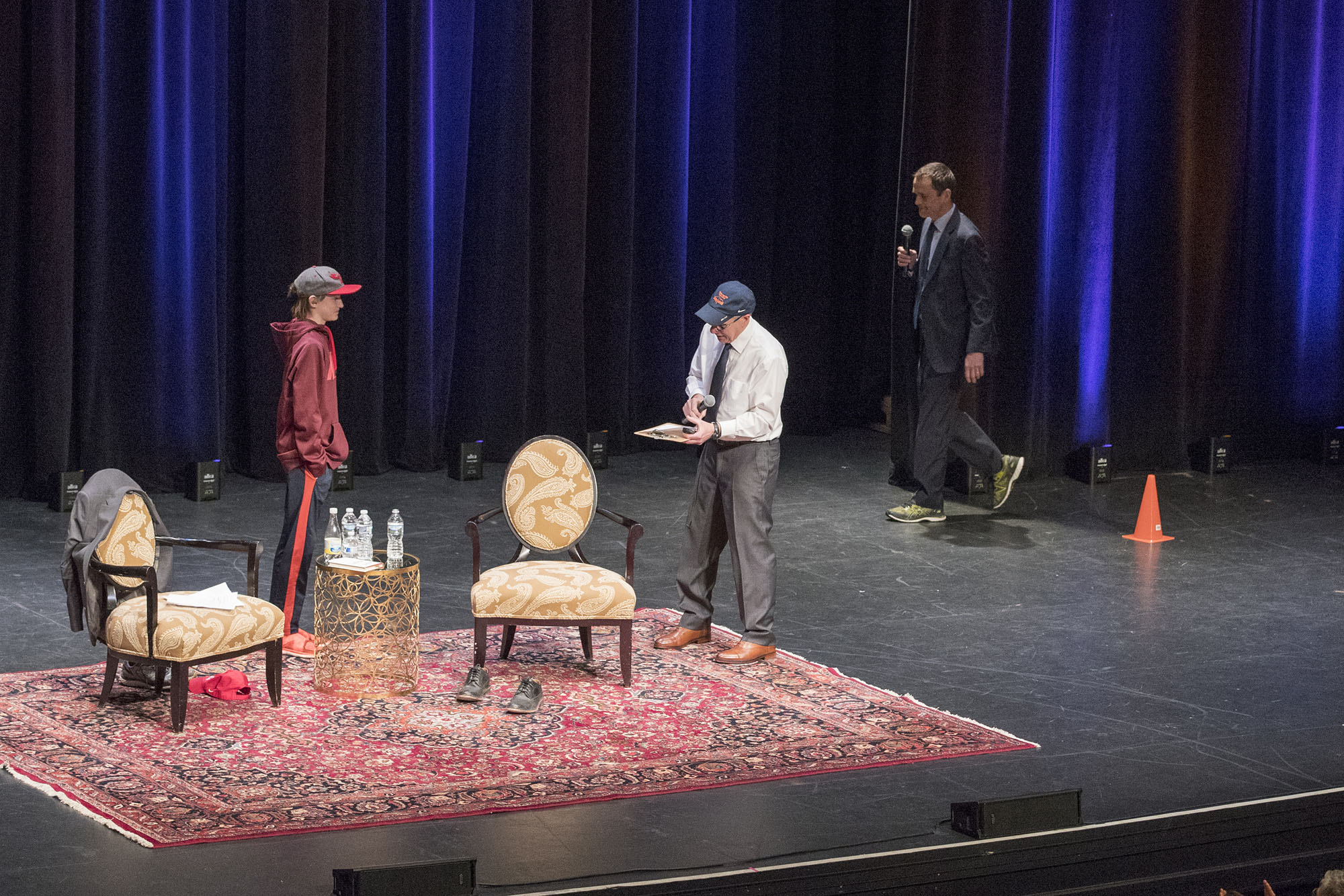 Ryan took the grueling course in stride and answered 33 wide-ranging questions from “What famous person would you like to have dinner with?” (Thomas Jefferson and Sally Hemings) to the name of Charlottesville’s new mayor (Nikuyah Walker), the best baseball stadium (Yankee Stadium), his favorite Bodo’s bagel sandwich (chicken salad on an everything bagel with horseradish), to one-word descriptions of each of his four children.

Selected by the Board of Visitors in September to become UVA’s ninth president, Ryan is a graduate of the UVA School of Law and previously served on its faculty for 15 years, during which time he and his wife, Katie, also a UVA Law School alum, and the Lorenzonis became friends and running partners.

Lorenzoni said he thought of their conversation as a chance to celebrate Ryan’s “remarkable gifts” and for the public to get to know Ryan better before he returns to take up the UVA presidency in August.

While they talked, Ryan showed the humor and humility, curiosity and openness in sharing personal experiences that have propelled him to where he is today. He was candid in talking about mistakes he had learned from, difficult situations he had faced and opportunities he had taken.

When Lorenzoni asked if the book’s popularity had changed his life, Ryan said it made him realize just how unpredictable life is. And the responses he’s received from readers, many of whom said the book was helpful, showed him there are all kinds of ways to help others – one of the principles he said his parents instilled in him.

He received many speaking requests after publishing the book. One of the most unusual was being invited to speak at a home builders retreat. It shows the delight Ryan takes in new experiences. After he listened to the builders critique his book when they didn’t know he was sitting in the audience, the head of the association interviewed him. Then the same audience started asking him for all kinds of advice, and he thought, “Why not?” To their question of whether to take a vacation at the beach or the mountains, he answered “mountains.” When asked what should you listen to in the car, news or music, he responded, “News on the way to work and music on the way home.”

When Lorenzoni asked him about the hardest conversations he’d ever had, Ryan quipped, “Do you mean aside from this one?” He then recalled talking with a longtime friend from UVA Law School when that friend had no options left in a battle against colon cancer.

When asked, “What are some defining moments in your life?” Ryan said clerking for U.S. Supreme Court Chief Justice William Rehnquist and finding his birth mother (he had always known he was adopted).

He and Rehnquist did not always see eye-to-eye on issues, he said, but he came to admire the judge and have great affection for him. It taught him that even if people disagree, they can still build a strong, respectful relationship. Especially these days, it’s important to resist this notion that people one disagrees with must be evil or ignorant, he said.

For most of his life, Ryan hadn’t felt compelled to look for his birth parents, he said. He thought he knew what reasons they must have had. But after a friend looking for his own father encouraged Ryan to find out about his birth parents, Ryan decided he’d pursue it, and after several months, found his birth mother.

He called and talked to her husband first, blurting out that he wasn’t crazy or looking for money. He just wanted to let her know that everything had turned out all right with him. The documentation he read gave him greater insights into what had actually happened. It turned out that she had prayed for him every day since she had decided, although heartbroken, to give him up for adoption.

They met at a rest stop on the Garden State Parkway in New Jersey, and there began a relationship and enrichment to his life that he never would’ve known had his friend not urged him to be curious about where he came from.

Of several values Ryan said his adoptive parents instilled in him, and that he would like to pass along to his children, one was to always do your best and another was to keep your door open. He grew up in a working-class neighborhood in Midland Park, New Jersey, where he said his mother regularly kept the door open, welcoming and feeding people who would drop in.

Another person asked Ryan about the place of the liberal arts in a college education. He answered that he’s “a huge believer in the liberal arts,” but thinks that’s not incompatible with learning skills or business. Although the liberal arts are the traditional curriculum, they will continue to provide the best preparation for careers in the future, as well as “the foundation for a lifelong understanding and inquiry.” Because we can’t predict what things will be like in 20 years, he believes a liberal arts education will still set graduates up for meeting the challenges of moving from one job to the next.

The last question of the event provided a fitting end – until Ryan assumes his job as president. When asked what he thinks UVA’s relationship to the community should be, especially in light of the violent protests on Aug. 11 and 12, he mentioned he watched the events on TV at the same time he was weighing whether or not to come to UVA. He recalled the speech Harvard President Drew Gilpin Faust gave after the 2013 Boston Marathon bombing, when she talked about the people who “ran toward” the devastated area to help.

He felt compelled to return to the University, he said.

Tragic events offer the opportunity to be honest about the past and the present, the good and the not-so-good, he said, and can open up the space for change to occur to make each other better.

The Virginia Festival of the Book, produced by Virginia Humanities and the Virginia Center for the Book, wraps up Sunday after presenting some 250 events over the five days.

What Is the ‘4th Side’? END_OF_DOCUMENT_TOKEN_TO_BE_REPLACED