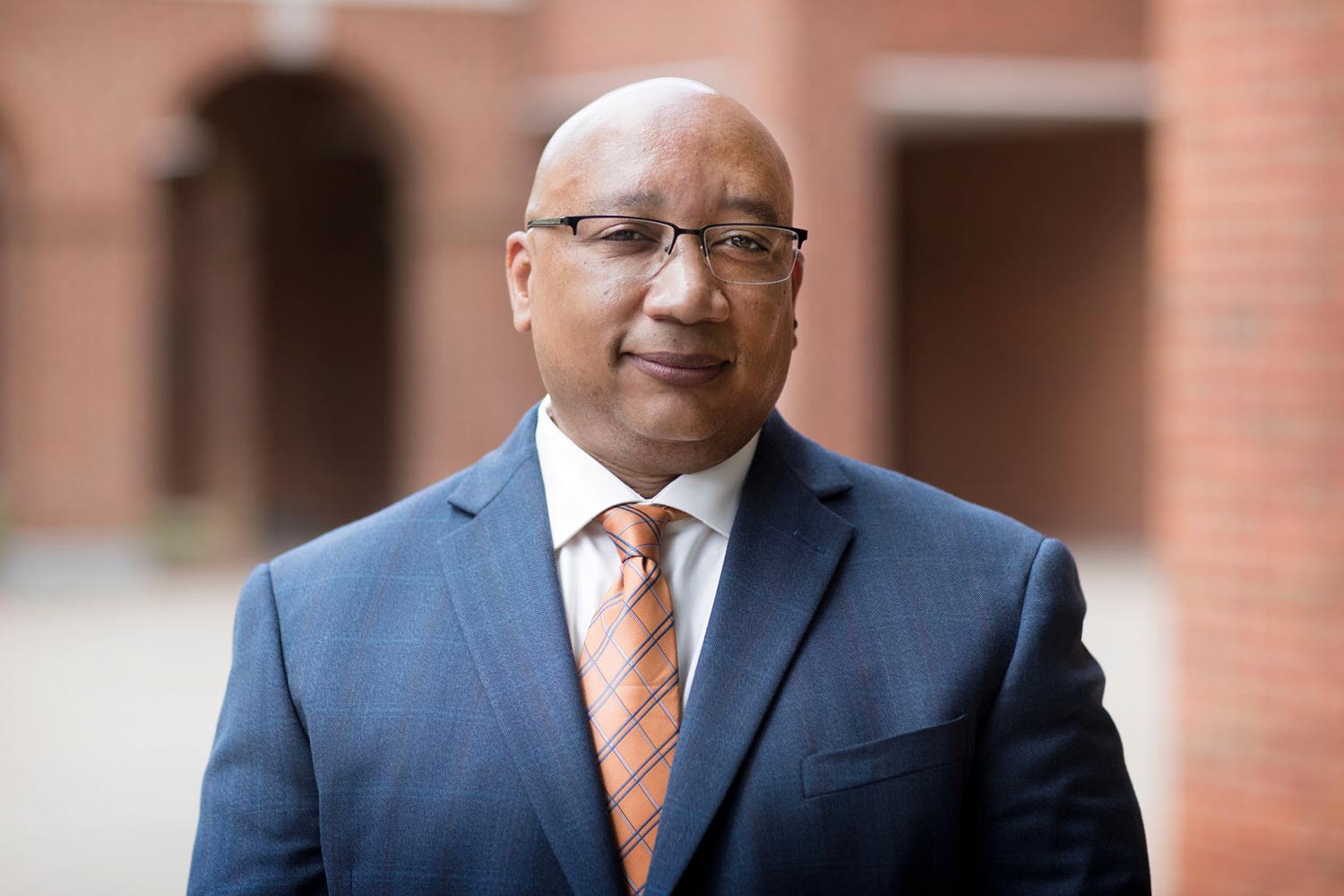 For Robert Q. Berry, mathematics is more than a lifelong profession – it’s a source of beauty and joy. As the new president of the National Council of Teachers of Mathematics, he hopes to advance policies that will help more teachers and students share in that joy.

“Yes, we do math for a reason. But there’s also something beautiful about mathematics,” said Berry, a professor in the University of Virginia’s Curry School of Education. “Math is embedded into music, into art, into things that we find aesthetically beautiful. How do we help students develop the appreciation and the understanding of that?”

Berry, who spent many years as a middle school teacher, said part of what drew him to teaching was his desire to share his love of math with students. But these days, he’s concerned that we’re too often divorcing the utility of math from the beauty of it. In school, he said, math is often too boxed in, too rote. In reality? Math is always there, if we take the time to look for it – woven into every other subject, into all areas of our lives.

Starting this month, Berry hopes his tenure as the president of the world’s largest organization for math teachers will help change that.

Berry joined the National Council of Teachers of Mathematics early in his teaching career. He and his wife, also a math teacher, have both been active in the organization for years – and Berry credits the organization for helping him develop as a professional. The opportunities and resources he found there, he said, helped him grow as a teacher and broaden his professional sphere early in his career.

Berry continued his involvement with the organization as he pursued graduate degrees and delved into research. When his graduate school adviser and mentor landed a position on the board, Berry realized that leadership positions in NCTM could be an option for him, too.

In the years since, Berry has served on many of the council’s committees and task forces. He also served a full three-year term on the organization’s board, which comprises 14 members representing a diverse range of geographic regions, specialties and other constituencies. He was elected as the incoming president in April 2017 and officially began his two-year term last month.

Personally, Berry said, the timing is right. He has support from his family, enough leadership experience, and guidance from the outgoing president, Matthew Larson – who, Berry said, helped create a vision for the organization that he is proud to continue.

“There are a lot of shoulders I stand on,” he said.

It’s a pivotal time to take the reins. Founded in 1920, NCTM will celebrate its centennial in 2020 – which means Berry is charged with leading the organization into its next century. And while he’s proud of the organization’s legacy so far, with its history of providing math teachers with valuable professional learning, conferences, books, journals and more, he hopes to lead the council deeper into advocacy and policy work.

“NCTM has primarily been a place where teachers get resources, professional learning and things of that nature,” he said, “and that has served its purpose well. NCTM is a leader in the field of math education, nationally and internationally. Now, it’s time for us to step into the policy space in a way that we haven’t before.”

Why now? It’s also a transitional time for the field of math education as a whole. First, there’s the growing momentum surrounding STEM curricula – what Berry sees as a well-intentioned focus on certain subject areas that, in practice, can fall short.

“Math is sometimes the missing ‘M’ in STEM,” he explained. He’d like to see more grade-level-appropriate math integrated equally with science, tech and engineering content.

On a broader level, Berry also hopes to advocate for more flexibility in mathematics teaching, particularly at the high school level. “Oftentimes, math has functioned as a gateway to keep people from having access to other opportunities,” he said. When math is offered only as a regimented course sequence, he explained, it can become a barrier for students.

Topics of access and equity have been a driving force in Berry’s work, both at the National Council of Teachers of Mathematics and in his work teaching at the Curry School. While he began his research career studying computational estimation, and was also the lead developer of an observation measure called MSCAN, the bulk of his most recent research focuses on the experiences of black boys in school mathematics.

His research revolves around tough questions: What are the factors that contribute to the success of black boys in the classroom? What does culturally relevant and cultural responsive teaching and pedagogy look like for mathematics teaching and learning?

In both his research and his position at the National Council of Teachers of Mathematics, Berry knows he’s posing complex questions – and he’s careful not to suggest that there are easy answers. But he sees a responsibility for NCTM, as a leader in the field, to ask those questions.

Despite his critiques, Berry maintains a certain focus on the positive. He’s determined to push the field to improve and to examine why things are the way they are – with the goal of making math more fun and accessible for everyone.

He and his colleagues at NCTM are already working on some ideas. What if, for example, high school students could take a course on functions – integrating algebra, geometry, calculus and trigonometry in one course? What if students could take an elective course on the mathematics of art or music? What if re-thinking student and teacher tracking could engage more students with the joy of math?

For today’s students, Berry said, it’s not enough to learn something just because they have to – they want to know how it affects their lives and the world around them. Drawing connections between math and students’ other interests can help them understand not only why math is important, but also why it’s interesting. That, Berry said, is what math teachers are here for.

“What are the essential knowledge and skills that kids need to know in order to be productive citizens, and also to understand the beauty joy and wonder of mathematics?” he said. “I think we can really get the conversation going about the possibilities.”

Berry knows the answers aren’t out of reach. He sees these conversations happening right now, with his colleagues and students at the Curry School.

“We co-teach, we ask questions, we push – we get them to think differently about things,” he said.

As the new president of the National Council of Teachers of Mathematics, he’s looking forward to using the platforms that he’s afforded – such as social media – to connect with the membership in new ways. He wants to push them to engage with the organization and with their communities in new ways. To think differently.

A Year We Will Never Forget: 2019-20 in Review END_OF_DOCUMENT_TOKEN_TO_BE_REPLACED

‘What Will You Carry With You?’ Remarks From UVA President Jim Ryan END_OF_DOCUMENT_TOKEN_TO_BE_REPLACED