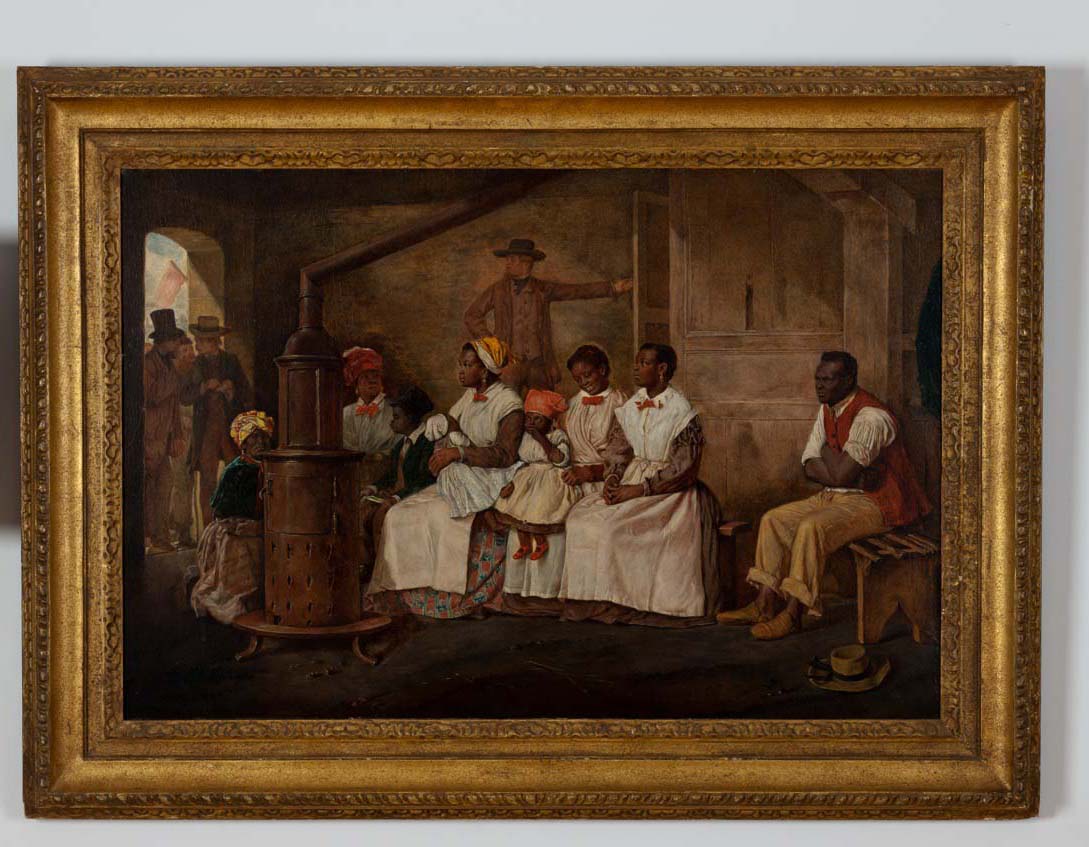 Image of the painting, &amp;quot;Slaves Waiting for Sale, Richmond, Virginia&amp;quot; by Eyre Crowe.

Although the international slave trade was abolished in the United States in 1808, the trading of slaves within the states remained big business, boosting the economy by tens of millions annually in the 1850s. Between 1820 and 1860, it is estimated that more than 2 million enslaved people were sold in the American slave trade; from Virginia alone, more than 350,000 were sold out of the state and were taken to the lower South – Alabama, Mississippi and Louisiana.

"Slaves Waiting for Sale: Abolitionist Art and the American Slave Trade," a new book by Maurie McInnis, art history professor and associate dean for academic programs in the University of Virginia's College of Arts & Sciences, tells the story of the slave trade from the vantage point of British artist Eyre Crowe's paintings and drawings.

McInnis considers Crowe's works in the context of the larger material world surrounding the slave trade, including the buildings and spaces used to house the slaves waiting for sale, the businesses that surrounded the pageantry of a slave auction, the auctions, how the slaves were transported and the economic and cultural landscape of the 19th-century in the South.

In 1853, on a tour of America as novelist William Makepeace Thackeray's secretary, Crowe read Harriet Beecher Stowe's anti-slavery novel, "Uncle Tom's Cabin." A sensation in the English-speaking world, it had just been published in book form and became the best-selling novel of the 19th century.

Stowe's depiction of slavery moved Crowe to attend a slave auction on a visit to Richmond. Greatly distressed by what he saw as he visited the rooms in which the slaves were waiting, he began sketching. He went on to sketch scenes depicting all aspects of the slave trade in Richmond and other cities as he and Thackeray traveled throughout the South. Many of the sketches appeared in the Illustrated London News, which was also read in America. He later created several paintings from the sketches.

Crowe's painting of 1861, "Slaves Waiting for Sale, Richmond, Virginia," depicts nine slaves as the focus of the painting and captures the "individual emotional cost of American slavery," and is an "unusual image that had never been seen before," McInnis said. Art depicting the slave trade usually focused on the sale; the auctioneer with his hand raised became a conventional image and an abstraction.

"Slaves Waiting for Sale, Richmond, Virginia," was exhibited at the Royal Academy in London just months after the American Civil War began. There was heightened public interest in American slave trade as Britain followed the news of the war and debated whether to become involved.

As part of the slave trade story, Crowe's paintings and illustrations reveal "the power of images in helping viewers then, and today, to see the slave trade in new ways and thus helped to spread anti-slavery sentiment," McInnis said.

American artists were reluctant to portray the politically charged subject, she said.

McInnis' book, published by The University of Chicago Press in late 2011, reconstructs Crowe's path through the South. Using Crowe's paintings and sketches as a starting point, she researched account books and letters, book illustrations, newspaper articles and other textual evidence to provide a window into imagining the slave trade and the urban fabric of three cities: Richmond, Charleston, S.C. and New Orleans.

"Slaves were 'dressed for the trade,'" McInnis said. "It was part of the 'theater' of the event. They were also given a part to play – to appear happy and healthy."

The slaves were held in a jail for maybe days, weeks or possibly months, "until the market price was advantageous to the slave trader. Prices were what the slave trade was all about," she writes in the book, and "the average selling process was about a thousand dollars."

In New Orleans, the site of the largest slave market in the U.S., the trade was very visible and regulated by the city. As a testament to the economic ambitions of the city, auctions were held in the most elaborate public rooms in a number of hotels. "The disparity between the refinement that Southern riches allowed and the barbarity of the slave trade was most conspicuously contrasted," McInnis said.

In Charleston, public slave sales were conducted outdoors on East Bay Street, one of the most important retail streets. They were popular as spectacle, but blocked traffic; in 1856, the city passed an ordinance to move the auctions inside.

Common to all cities was the red flag that hung outside each auction room, upon which auctioneers would pin announcements of the auctions and descriptions of the slaves to be sold. McInnis devotes a chapter to the red flag, the business of the transaction and how it played into the larger economy and the place of slave traders in society.

After sale, slaves were transported in a number of ways. Some were marched in groups known as "coffles," a practice that became less common as rail lines covered more of the South. By railway, they were transported in special cars referred to as the "Negro car," which often doubled as the baggage car. Compared to the overland march, which could last seven or eight weeks, the slaves arrived in better physical condition. Still others were sent by ship, most commonly to New Orleans.

McInnis devotes a chapter to not only the transport, but also what life was like for the relocated slaves. As the economics of the South's agrarian society changed, auctions often separated families – mothers were sold to one buyer, fathers to another and children to still others.

McInnis said it is remarkable "how few places commemorate the slave trade." In Richmond, a 2008 archaeological dig in the Shockoe Bottom area unearthed traces of slave trader Robert Lumpkin's jail, where slaves awaiting sale were kept. Interstate 95 covers about half the area once occupied by Lumpkin's properties. In 1998 the city established the Slave Trail Commission, which has erected a series of signs to commemorate sites of importance to the history of slavery.

In Charleston, the Old Slave Mart Museum is devoted to recounting the city's role in the interstate slave trade.

In New Orleans, McInnis said, the history of the slave trade – once a point of civic pride – is virtually invisible. McInnis will speak about the book at a Virginia Festival of the Book panel discussion, "Two Perspectives on Slavery and Beyond," on March 23 at 4 p.m. at City Space in the Charlottesville Community Design Center.