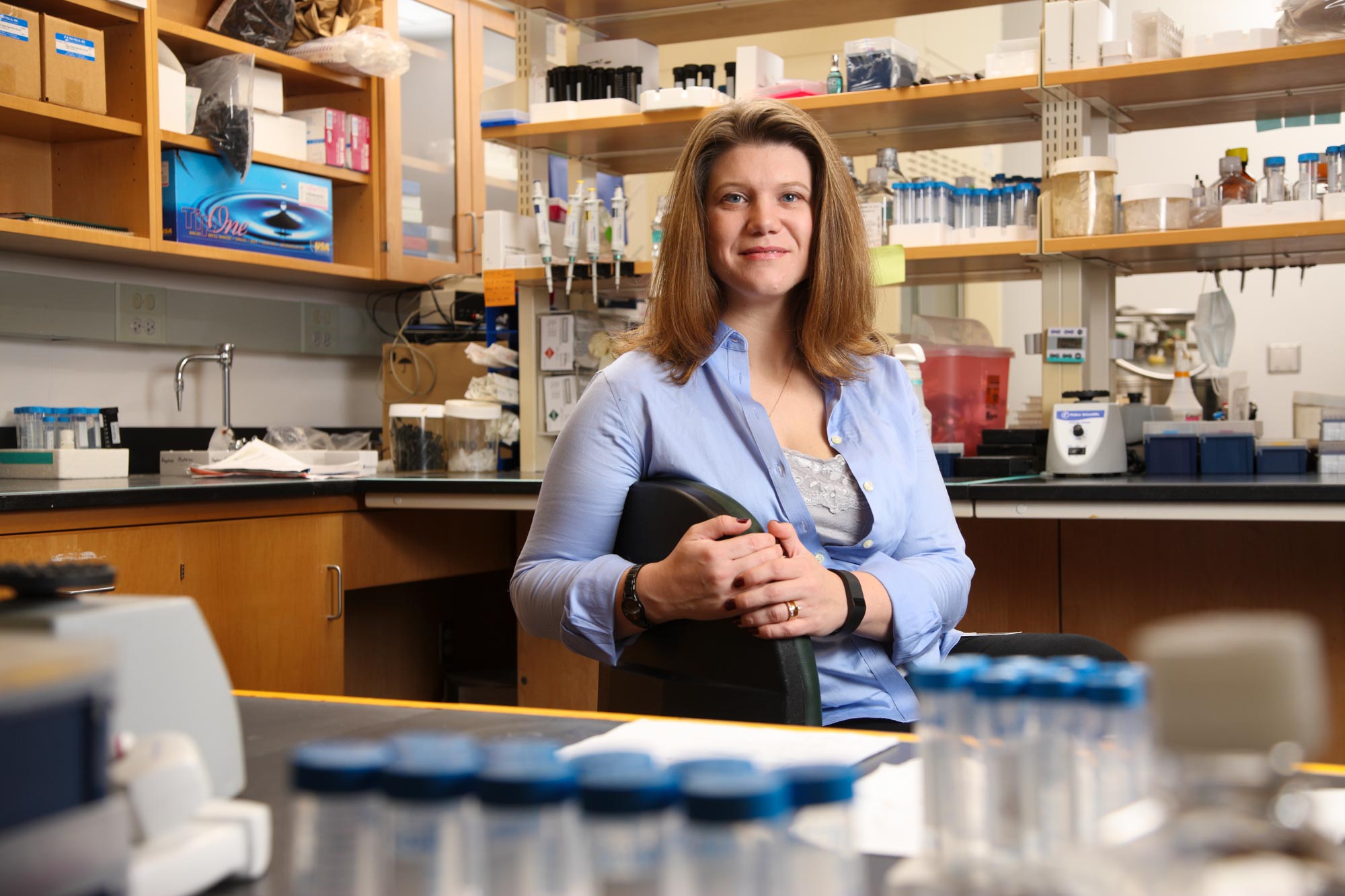 In her previous post as an assistant professor at Massachusetts General Hospital, University of Virginia biomedical engineering professor Kimberly Kelly discovered something unusual about cancer cells. Many of them have plectin – a protein normally found in cells’ interior cytoskeletons– on their surface.

“We don’t know how plectin gets on the surface of cancer cells, but we do know that it is necessary for the cancer to grow and metastasize,” said Kelly.

That, of course, makes it a prime target for researchers, like Kelly, who are searching for a cure. And, it’s a big reason that the Charlottesville-based biotechnology company she founded, ZielBio, closed an extraordinary $25.1 million in Series A financing late last month.

The funding will go toward the development of a drug called ZB131, an antibody designed to target plectin found on the surface of multiple types of cancer cells, including ovarian, pancreatic, lung and colorectal cancers. Extensive laboratory work has demonstrated that ZB131 can bind to the plectin on cancer cells’ surfaces, arresting growth and even inducing necrosis – cell death – to shrink and eliminate tumors.

Because it only binds to cancer cells, Kelly and her team believe the treatment could have less harmful side effects than chemotherapy, which often attacks healthy cells as well.

“It’s incredibly exciting,” said Kelly, who joined the UVA Engineering faculty in 2008 and also serves as president and chief science officer at ZielBio (previously known as iTi Health). “We worked really hard to take our lab work and distill it into a story and a vision, so that people will buy into what we are trying to do.”

Primarily, she said, the funding will support the next steps in manufacturing and testing ZB131, including the investigational new drug studies, or IND studies, that are required before the first human clinical trial.

Investors at Morningside Venture Investments, one of the primary companies supporting ZielBio, noted that ZB131 has the potential to be more effective than current treatments.

“Despite the incredible progress being made in immune-oncology, current therapies have limits and there remains a profound need for new targets and options for many deadly cancers,” Morningside investment advisor Jason Dinges said in a press release. “ZB131 has shown potentially superior immune activation to current checkpoint inhibitors and greater direct tumor cell killing than EGFR inhibitors.”

The development of ZB131 was made possible through the proprietary Zielfind drug discovery platform, which Kelly began developing at UVA before starting ZielBio. The platform – appropriate to the German root of its name, “ziel,” meaning “target” – uses specialized algorithms to screen cells for targets that could mark particular diseases, as cell surface plectin marks some cancers. Each target is entered into an ever-expanding searchable database, allowing for much faster screening than usual.

“Normally, with this kind of screening, you can only do about 100 samples at one time,” said Kelly, who developed the algorithms with her team over the past three years. “With this technology, we can look at 2 million, giving us a statistically valid quantitative sampling.”

Researchers can then develop drugs that can bind to the specific targets identified, both for cancers and for other diseases. For example, Kelly has previously partnered with AstraZeneca to screen for cardiac and metabolic diseases.

“Every screen we do goes into the database, which then refines our data further,” she said.

“I hope we will see substantial, significant improvement in patients’ lives, both improving quality of life and extending life by years.”

Like many faculty members at the University, Kelly recognized the potential of what she was working on and created a spinoff company. Several resources at UVA, including the UVA Licensing & Ventures Group and UVA Compliance, which manages conflicts of interests, help professors take their research from the lab to the market. UVA is also one of only a few top research universities in the country with co-located schools of engineering and medicine.

“We are always looking for ways to bring our work out of the lab and into the community,” Kelly said. And, she said, the experience is pretty valuable in the classroom.

“I can give my students firsthand knowledge of what it takes to manufacture drugs, from the different stages of clinical trials to FDA approval,” said Kelly, who teaches drug development in courses like “Nanomedicine” for third- and fourth-year students. “The students I am mentoring in my lab can see how things are done, in terms of making a real drug that could change lives.”

ZielBio and ZB131 certainly have the potential to change many lives. In addition to the ovarian, pancreatic, lung and colorectal cancers already identified, Kelly hopes the drug can help treat lung cancer, gastric cancer, triple negative breast cancer and head and neck cancer – all cancer types with high levels of cell surface plectin.

“I hope we will see substantial, significant improvement in patients’ lives, both improving quality of life and extending life by years,” she said.

What’s Next for UVA’s Class of 2022? END_OF_DOCUMENT_TOKEN_TO_BE_REPLACED