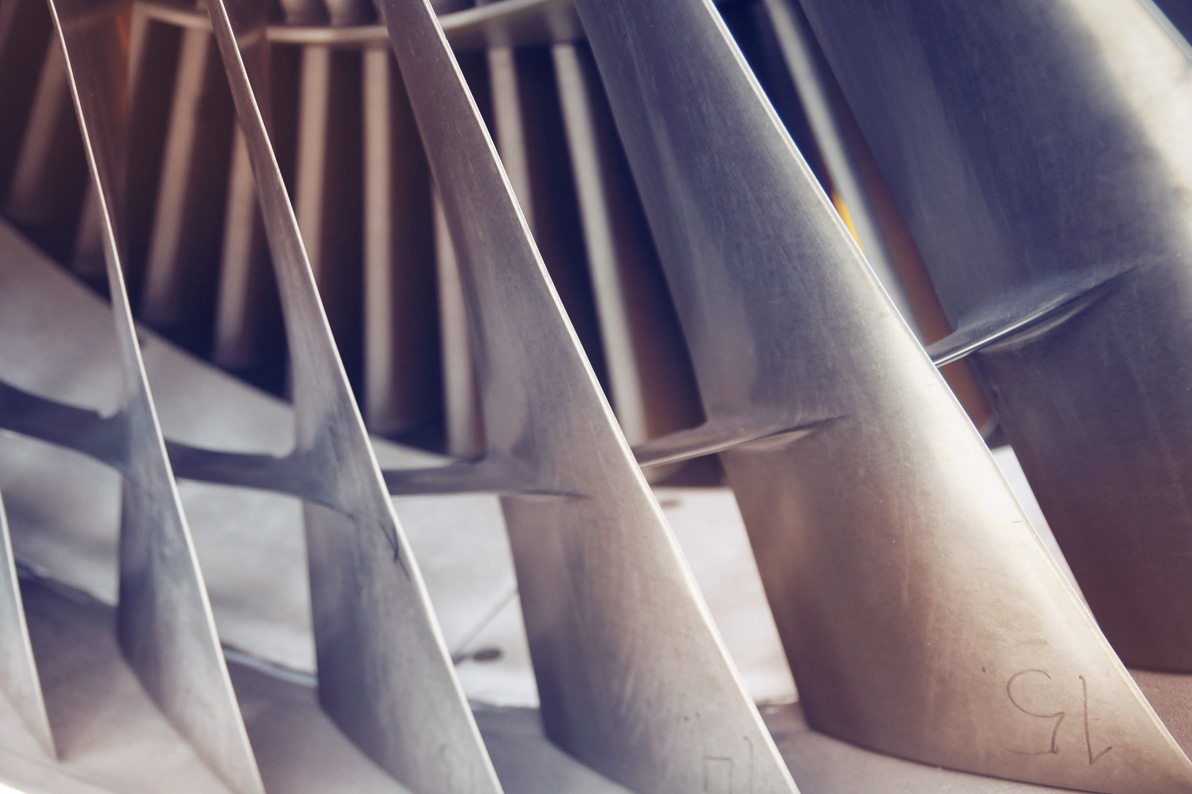 Robert Kelly has a time machine.

Kelly, AT&T Professor of Engineering in the University of Virginia’s Department of Materials Science and Engineering, is able to launch pieces of metal into the future, accelerating their aging through corrosion, the degradation of materials.

He did this recently for Rolls-Royce, subjecting small, curved, ceramic-coated jet engine compressor blades to an aggressive salt spray test that accelerates the damage processes they would face in an airplane turbine. 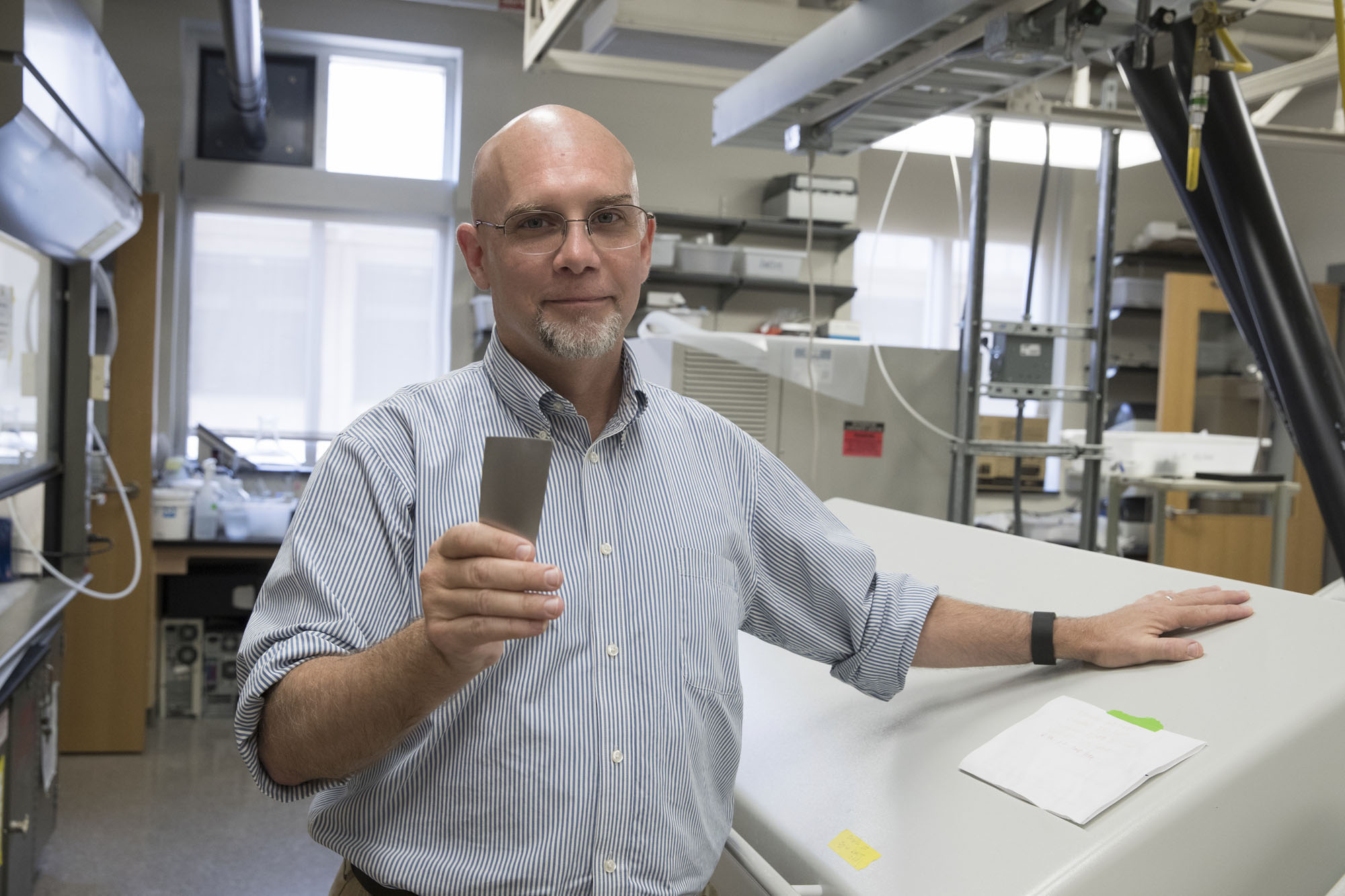 “This compressor blade is made of stainless steel and would be coated with a thin ceramic,” he said. “Jet engines suck in a lot of dust particles at a high speed. And if you have a carrier-based aircraft, it will also see a lot more salt water in the form of sea salt aerosols.”

Kelly said Rolls-Royce, which is partnering with the University in three prestigious research centers, produces the blades and coats them with ceramic material. A thinner coating means the blade is lighter and can turn faster, but too thin a coating will allow corrosion to propagate under the pressure of flight and environmental conditions.

“They sent samples of various thicknesses to us for testing,” Kelly said.

Jay Srinivasan, one of Kelly’s doctoral students, placed the compressor blades in a cyclic corrosion test chamber, a commercial device used to test for corrosion through manipulating temperature, humidity and salt. Kelly and his team have modified the chamber, creating a way to add ozone to the mix and accelerate the process.

“Ozone is a good proxy for natural oxidizers, something that is missing in most accelerated tests,” he said.

Using the chamber with his modifications and test protocols, the team was able to supply Rolls-Royce with data on how well the compressor blades endured the onslaught of the elements. The blades were from the compressor in the front of the engine, which prepares the air for combustion. As such, they would be exposed to a wide variety of environmental factors.

“We exposed them to 100 hours of testing – raising the temperature, accelerating the wet and dry cycles, making the test more aggressive chemically without changing the type of damage that the corrosion was doing,” Kelly said. “The tests we performed were 16 times faster than the previous test Rolls-Royce used on its blades, saving them a lot of money and time.”

“This is a quick and useful way to see what could go wrong in the future without changing the mechanism of degradation that occurs naturally,” said John Scully, chair of the department and co-director with Kelly of the Center for Electrochemical Science and Engineering. “Some materials will last for years, but get weaker and then they reach a point where they will no longer be able to serve their original function.”

“The testing was something that was really helpful to Rolls-Royce because we were able to get answers faster,” Kelly said. “For them it was a really big deal.”

It is a big deal for the University as well, according to Scully. He said challenges such as the Rolls-Royce compressor blades provide UVA with opportunities to expand the knowledge base, improve products and provide student researchers with experiences that will help their careers.

“There is a high demand for corrosion research, and external sponsors come here with their problems and/or they need trained personnel,” Scully said, noting many former students are now professors in prestigious universities around the world. “We are involved in human resource development, and these partnerships give incredible research experience that the students can take out into the world.” 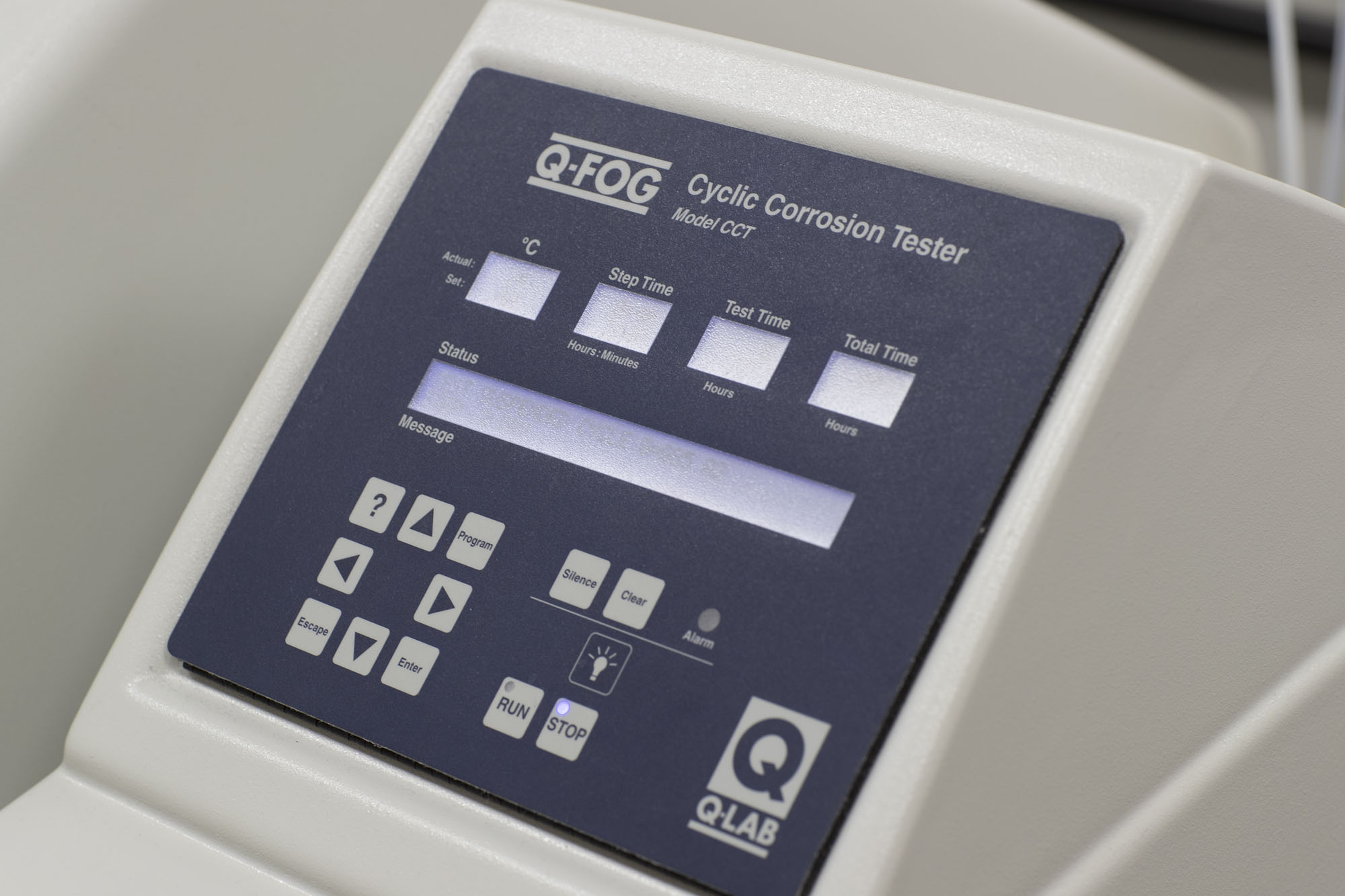 Scully said Kelly was very good with people, able to relate to industrialists, world-renowned scientists and students equally well. “He has a personality that engages people,” Scully said.

Kelly became interested in corrosion research while still a student at Johns Hopkins University, where he got his degrees – bachelor’s through doctorate. His work-study job connected him with a professor researching material corrosion in artificial knees and hips.

“I became fascinated with applications and the science, and by how little we knew,” he said. “Corrosion is something you know will happen, and that you can’t stop it, but you want to delay it long enough for the material in question to get the job done.”

Scully said corrosion research benefits society and contributes to problem-solving on issues of nuclear waste storage, the stresses on aging aircraft and, working with NASA, performance of the space shuttle.

Kelly is also fascinated with the intersection of fields that occurs in corrosion research.

“This combines chemistry, physics, math – we need to consider other areas, because it intersects with a lot of others, and allows me the opportunity to collaborate with a lot of people,” he said. “It is a fundamental science that works all the way through to a final application.”

Kelly and Scully described their work as “fun.” He recently was recognized for his corrosion research by the Electrochemical Society, which seeks to advance theory and practice of electrochemical and solid state science and technology and allied subjects. The society presented him with the H.H. Uhlig Award for excellence in corrosion research and outstanding contributions to the field. Kelly was inducted as a technical fellow of the Electrochemical Society in 2010.

Kelly has co-written more than 100 papers and supervised 20 Ph.D. students, as well as 18 master’s students. The National Association of Corrosion Engineers named him the 1997 recipient of the A.B. Campbell Award for a paper he had written on corrosion. A fellow of NACE International, Kelly also has won several UVA teaching awards, including an All-University Teaching Award in 2004.

It’s Copperhead Season in Virginia. Here Is What You Need to Know END_OF_DOCUMENT_TOKEN_TO_BE_REPLACED

What’s Next for UVA’s Class of 2022? END_OF_DOCUMENT_TOKEN_TO_BE_REPLACED