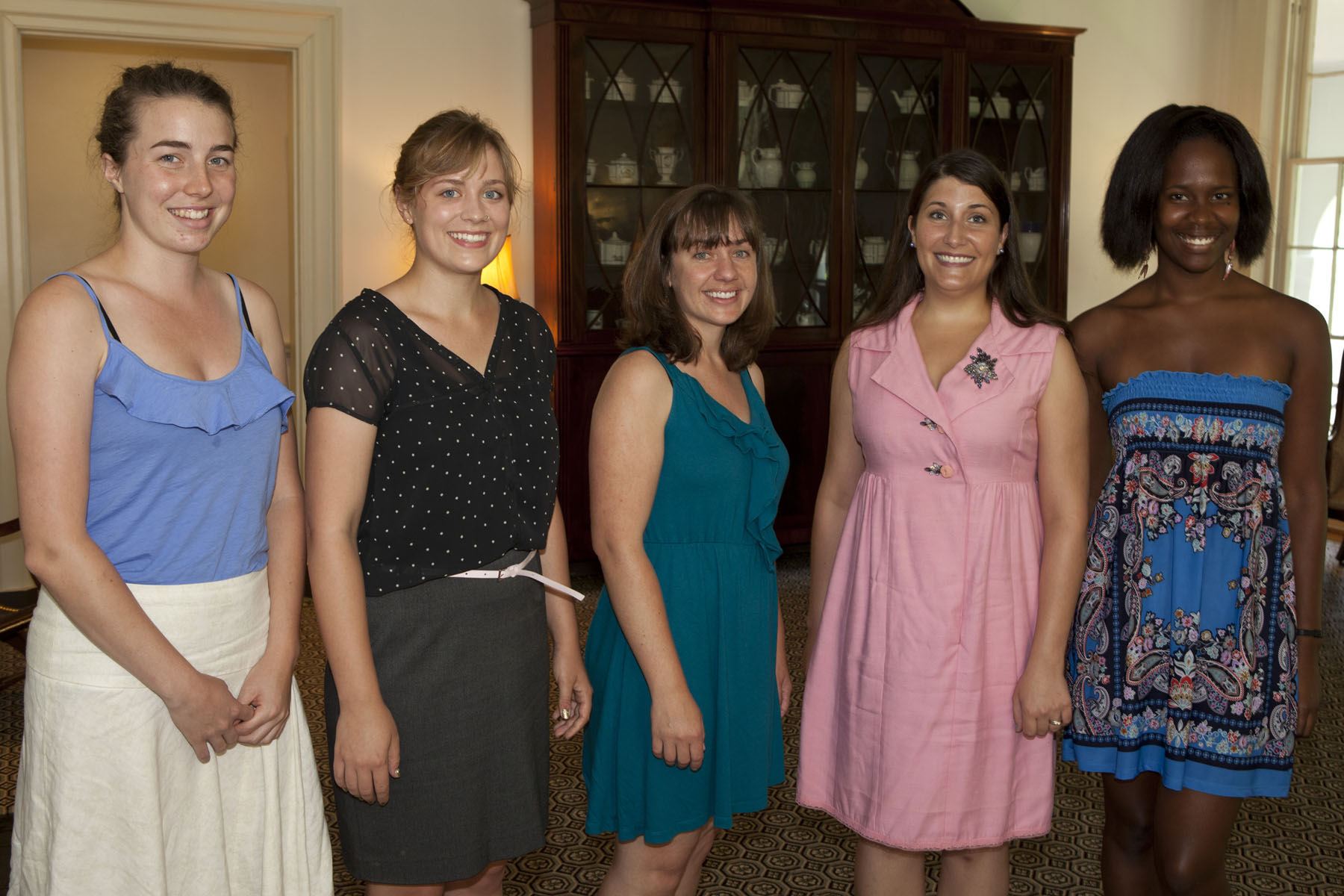 May 31, 2012 — C. Jared Loewenstein, curator of the Jorge Luis Borges collection in the University of Virginia's Special Collections Library, sat on the same couch in the Colonnade Club where he first met the Argentine author 50 years ago. This time, he was talking about a recently graduated U.Va. student, Emma Whittington, who is breaking new ground in the literary analysis of Borges' texts.

Whittington, a distinguished major in comparative literature, in the College of Arts & Sciences, is the inaugural recipient of an annual prize for the most outstanding project submitted to the Rare Book School U.Va. Fellowship program.

Each year, seven "RBS-UVA Fellows" are selected from a pool of undergraduate, graduate and Ph.D. students. The winners receive scholarships to attend courses on the history of books and printing not available through U.Va. course offerings. The awards are made possible by a grant from the U.Va. Alumni Association's Jefferson Trust.

Whittington presented her project Wednesday at a luncheon in the Colonnade Club honoring this year's and next years' RBS-UVA Fellows and their faculty sponsors.

She took a physical approach to analyzing Borges by creating side-by-side comparisons of several versions of his book, "Ficciones." Borges' stories often play with ideas of authorship, writing and rewriting, and suggest that the differences in manuscripts are important. Whittington thought it would be interesting, therefore, to examine the textual evolution of Borges' work.

"I think a lot of scholarship is based on the minutia of a word. It can really alter our understanding of the meaning of a text," Whittington said.

Borges' ideas about mirrors and infinite universes have influenced literary movements, including "magic realism," as well as many contemporary authors. Loewenstein noted that although scholars have studied the changes in texts of many other major authors, no one had conducted significant analysis on Borges due to scarcity of material. Whittington took advantage of the extensive Borges collection that Loewenstein began amassing in the 1970s to do her own firsthand research.

"This is the first time anyone has done any sort of textual criticism on Borges," said Loewenstein, who served as Whittington's faculty sponsor. "It's going to open many doors."

Loewenstein, who worked with Borges during the last decade before his death in 1986, helped Whittington to set up an interview with Borges' widow, Maria Kodama, during Whittington's spring break trip to Buenos Aires. There, she learned that Borges, who eventually went blind and dictated his work to Kodama, would ponder a single word for weeks on end and was constantly revising.

"Maria said he was like a computer – he would remember a note he wrote in a book 60 years ago," Whittington said.

Whittington first gained background for her project through a course called "Books as Physical Objects," with English professor David Vander Meulen, and her Rare Book School class on publishing, "The American Book In the Industrial Era," taught by Michael Winship.

She said she hopes her work helps encourage future scholarship on Borges.

"I would like scholars to think about this as a starting point to look at Borges' work," Whittington said. "Hopefully this is the beginning of something useful."

Michael Suarez, director of the Rare Book School, professor of English and honorary curator of Special Collections, praised Whittington's project as an example of collaboration among students, mentors, Special Collections librarians and teachers at the Rare Book School. He said he hopes the school can play a greater role in the instructional and intellectual life at U.Va. in years to come.

"We have to remember U.Va. is the only university in the world that was founded by an 18th-century bookman," Suarez said.

What’s Next for UVA’s Class of 2022? END_OF_DOCUMENT_TOKEN_TO_BE_REPLACED