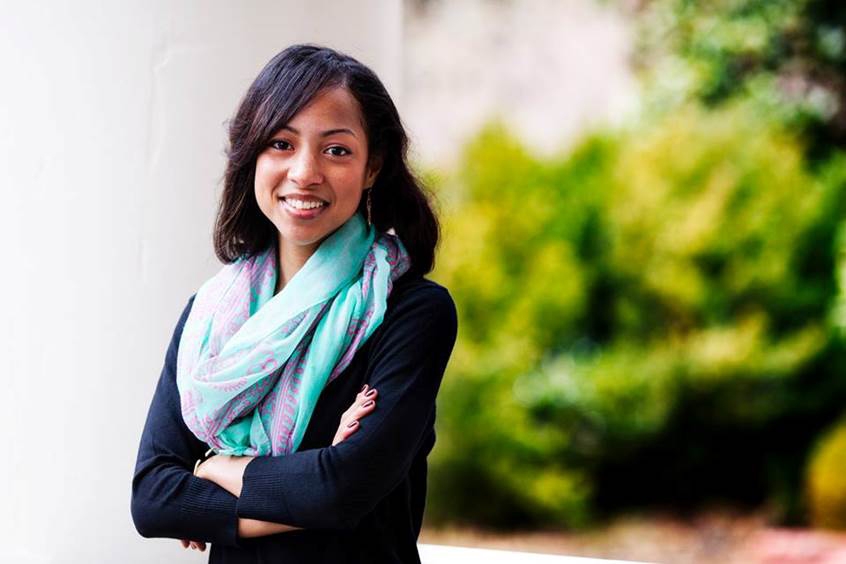 Examining the lives of black women during the Civil War has earned a University of Virginia graduate student a Woodrow Wilson Dissertation Fellowship in Women’s Studies.

Tamika Richeson, 28, of Cleveland, a doctoral candidate in history, will receive the $5,000 fellowship, which will contribute toward her final year of dissertation writing.

Her dissertation, “Wild Colored Woman: A Legal and Cultural Examination of Black Female Criminality During the Civil War,” examines 19th-century law and culture to explore the racial and gender context in which American criminal law took shape.

The dissertation title comes from an 1855 Washington Evening Star that described a black woman sentenced to a workhouse as a “wild colored woman.”

“I never learned the extent of what she was trying to convey, which is a common problem in researching the testimonies of black women in nineteenth-century legal proceedings,” Richeson said. “The legal testimonies of black women were not considered in the outcomes of most cases and they were not allowed to testify against whites, even in instances where they were the injured party.  In my study, the incident involving the ‘wild colored woman,’ functions as an anecdote for black women who vocalized their grievances and the ensuing cultural tropes associated with black women when they attempted to do so.”

“It is rewarding to receive national attention for my work,” Richeson said. “I appreciate the organization's commitment to women's studies across disciplines and it is also incredibly helpful to receive financial support for my work.”

Her dissertation examines the experiences of enslaved and free black women in Washington, D.C. during the Civil War. She looked at their encounters with the criminal courts to understand the racial and gender context of 19th-century criminal law.

“I stumbled upon a rich source base in the National Archives that listed over 500 arrests of black women in Washington just in the years between 1861 and 1862,” Richeson said. “I wanted to learn more about the extent of their law-breaking and how it affected local and national perceptions of black women at a time where many enslaved women were becoming free.”

Her research has answered some questions Richeson had about the lives of black women during the Civil War.

“I was well-versed in the history of 19th-century black women who were antislavery organizers, educators and primarily middle-class, but I wanted to know what the other women were up to,” she said. “This led me to police precinct records, criminal court dockets, newspaper features and, ultimately, my dissertation.”

“Tamika’s research has recovered the stories of black Washingtonians across the lines of class and gender, and elucidates the transition from slavery to freedom in the Civil War era,” Varon said. “She has created a remarkable database that draws on jail registers, warrants, newspapers, police reports and court records to enumerate and map the arrests of African-American women in Washington, D.C., in the years from 1850 to 1880. She argues that white discourses of black female criminality – that ascribed lawlessness and deviance to the underclass, and that sensationalized allegedly criminal behavior – were mobilized in this era to hold the line against the movements for emancipation and black citizenship.”

Many black women’s actions that were construed as crimes within the white culture of the period can also be understood as strategies of survival, resistance or self-expression, Richeson’s scholarship argues.

“An example of this can be found in the case of one enslaved woman named Agnes who killed her master with an axe after repeatedly being raped and beaten by him since she was a child,” Richeson said. “Despite the fact that he had previously gone to court for murdering another enslaved woman named Katy prior to this incident, Agnes was executed for her decision to protect herself.  Because she was legally regarded as his property she held no legal standing for claims of self-defense.”

Richeson, whose goal is to become a college professor, received her bachelor of arts degree in black world studies from Miami University in Oxford, Ohio. She has served on the U.Va. President's Commission on Slavery and the University, and is on the board of directors of the Prince William Historic Preservation Foundation. She is a member of the American Historical Association, the Association for the Study of African American Life and History, the Association of Black Women Historians, the Organization of American Historians and Delta Sigma Theta Sorority.

“Tamika is a model of efficiency, creativity, initiative and professionalism,” Varon said, “and she has enhanced the intellectual life of the college both through her scholarship and her work as a public and digital historian.”

Richeson is one of 10 doctoral candidates selected from 135 applicants by the Woodrow Wilson Foundation to receive fellowships. Since the founding of the Woodrow Wilson Dissertation Fellowship in Women’s Studies in 1974, there have been four other fellows from U.Va.