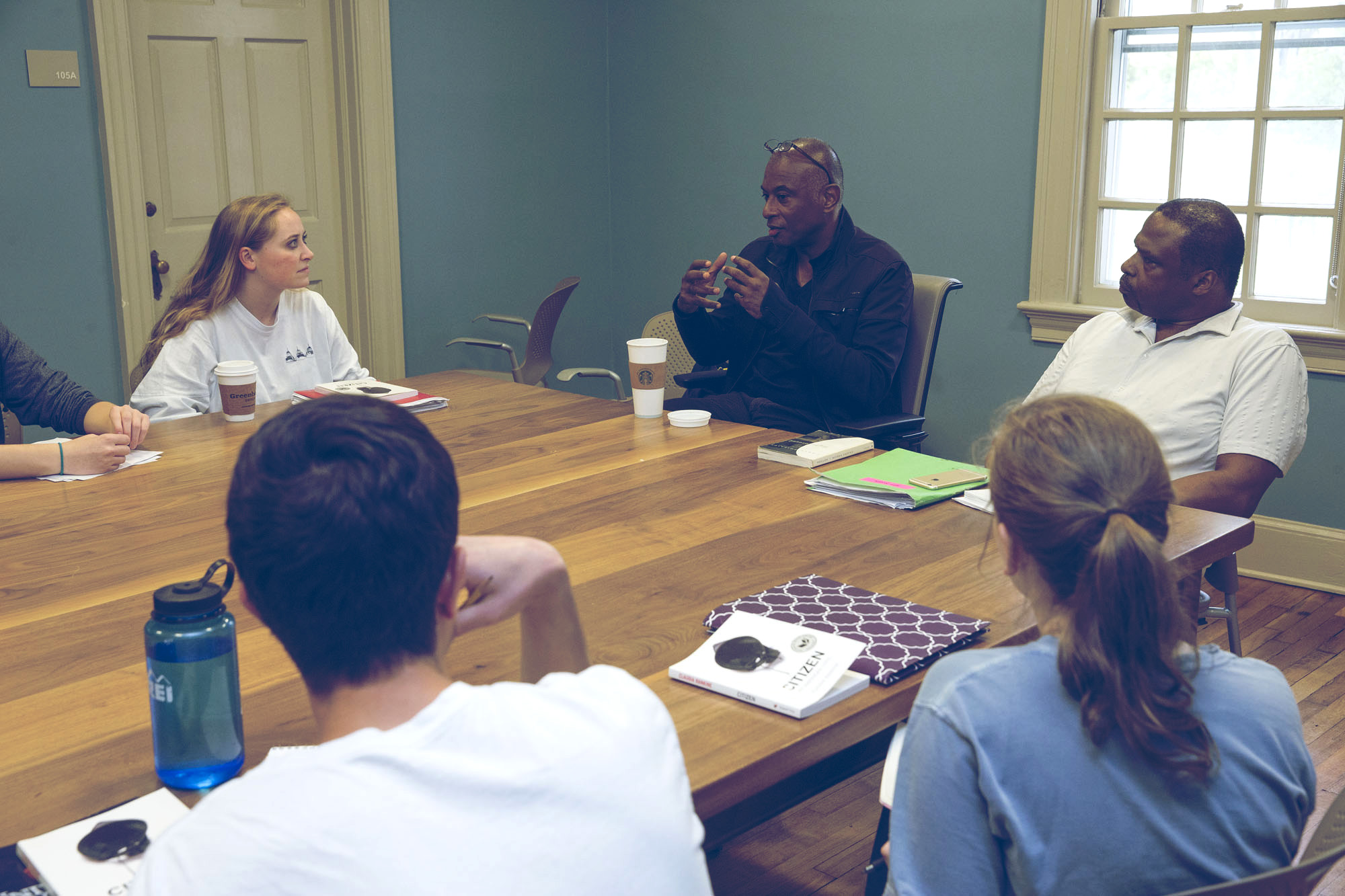 Knapp, a first-year graduate fiction writer in UVA’s renowned Creative Writing Program, housed in the English department, was referring to the visit of writer Caryl “Caz” Phillips, who is meeting with students and giving talks during his two-week residency.

In addition to leading a master class for graduate and undergraduate students and holding one-on-one consultations with M.F.A. and undergraduate prose writers, Phillips gave a reading on April 14 and will give a lecture about James Baldwin on Thursday. The event, free and open to the public, will take place at 5 p.m. in the auditorium of the Albert and Shirley Small Special Collections Library.

“In addition to the thrill of having a writer of Caryl Phillips’ stature read our work, I think we all agree that it’s tremendously helpful to get feedback from a writer who doesn't know anything about us,” Knapp said. “Mr. Phillips has been so approachable since he arrived that we’re all really getting the full benefit of his wisdom.”

Phillips, who the New York Times called “one of the literary giants of our time,” has written 10 novels and five works of nonfiction, exploring the African diaspora in the Caribbean, England and the United States and how that influences identity. 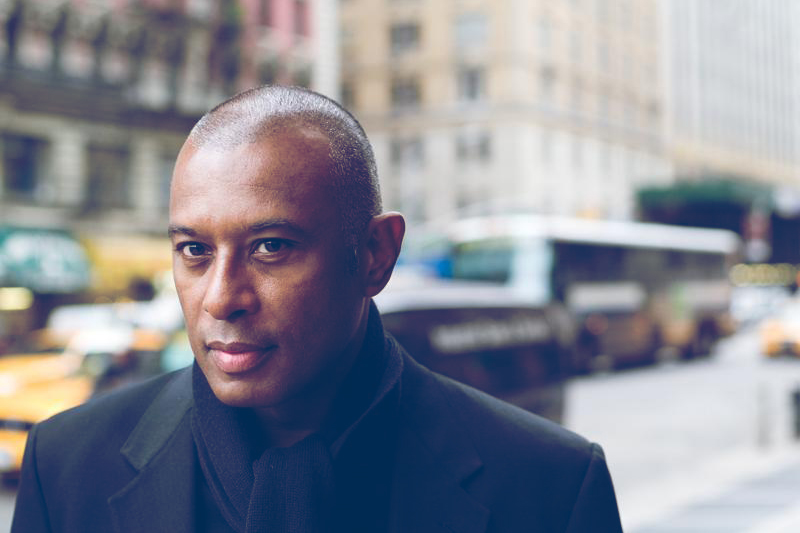 Phillips has written 10 novels and five works of nonfiction, exploring the African diaspora in the Caribbean, England and the United States and how that influences identity.

Born in St. Kitts, he grew up in Leeds and studied English literature at Oxford University. A well-known playwright as well, he is a professor of English at Yale University and became an American citizen after the 9/11 terror attacks, he said.

Several students commented on his ideas and advice, describing him as down-to-earth, supportive and incisive in his discussions.

Nichole LeFebvre, also in her first year as a graduate M.F.A. student, shared with Phillips a section of her memoir-in-progress, which has evolved from a series of prose poems, she said.

“Phillips was happy to talk about a range of genres and writers who’ve inspired the work,” she said, and he put to rest her worries about “the disjointed timeline” of her piece.

“We spoke about fractured narrative and the current landscape of writers blurring the lines between memoir and fiction, about incorporating poetry into prose,” LeFebvre wrote in an email. “Perhaps the most helpful advice was the reading list he gave me, tailored to my current project. Once I’ve read these books, he told me to think about where I might sit on the spectrum from fiction to autobiographical fiction to memoir.”

“Most of them are on the threshold of leaving, so it’s been very interesting to listen to how they anticipate their experiences at UVA will translate into the ‘real’ world. Without exception they seem level-headed and realistic, which is more than I can say about myself at their stage! It’s been very pleasing to see the amount of care and energy the Creative Writing faculty invest into their program and students.” – Caryl Phillips

In the master class, he also dispensed guidance about the writing process.

Ethan Feuer, from Brooklyn, New York, who switched from architecture to writing before coming to UVA to pursue his master’s in creative writing, joined other students who said they’d be thinking about Phillips’ wisdom for some time to come.

“At the master class, he gave us several questions he asks himself in order to get into writing without structuring the life out of the subject,” he said. “He also emphasized that if the act of writing isn’t energizing you, it won’t energize the reader either. This sounds obvious in theory, but I’m slowly internalizing that there’s a lot we’ll let ourselves get away with as writers that we wouldn’t tolerate as readers. We indulge ourselves.”

Anna Tucker, a fourth-year undergraduate double-majoring in media studies and the Area Program in Literary Prose in the English department, said in an email that she “found his insights into defeating a blank page, avoiding big common story killers, and valuing character over plot development immediately useful.”

Feuer, who called Phillips’ fiction reading “spectacular,” said he appreciated hearing about the author’s writing concerns while working on his eighth novel, “Dancing in the Dark,” which won the 2006 PEN/Beyond the Margins Award and tells about the early-20th century black entertainer Bert Williams, who has nearly dropped out of American music history.

Along with reading aloud a few sections of the novel at last week’s public reading, Phillips stopped in between them and conversed with UVA writing professor Jeffery Allen, and also answered audience questions at the end.

“It was great to hear him discuss performance as a lens for black identity in the United States, and how he came to inhabit that space emotionally through Bert Williams,” Feuer said. “Williams’ lack of biographical information also brought to the fore the recurring dialogue in his thinking between imagination and research, and between structure and exploration.”

Phillips’ acclaimed books include “The Lost Child,” “A Distant Shore,” “Crossing the River” and “Colour Me English.” His literary awards include Rockefeller and Guggenheim fellowships and a Lannan Literary Award. He won the Martin Luther King Memorial Prize for his nonfiction volume, “The European Tribe,” and the Malcolm X Prize for Literature for his novel, “The Final Passage.”

The award-winning writer said he’s enjoying meeting with the students and discussing their work. “Most of them are on the threshold of leaving, so it’s been very interesting to listen to how they anticipate their experiences at UVA will translate into the ‘real’ world. Without exception they seem level-headed and realistic, which is more than I can say about myself at their stage! … And it’s been very pleasing to see the amount of care and energy the Creative Writing faculty invest into their program and students,” he said.

Phillips is the second writer in the program supported by the College and Graduate School of Arts & Sciences’ Kapnick Foundation Distinguished Writer-in-Residence Endowment, which was created to bring writers of international stature to the University to teach and engage with students and the literary community. The late James Salter served as the first Kapnick Distinguished Writer-in-Residence in the fall 2014.

The program follows in the tradition of William Faulkner’s legendary residencies at UVA in the 1950s. During one discussion, Phillips even paraphrased Faulkner, saying “the novel is an investigation of the human heart in conflict with itself.”