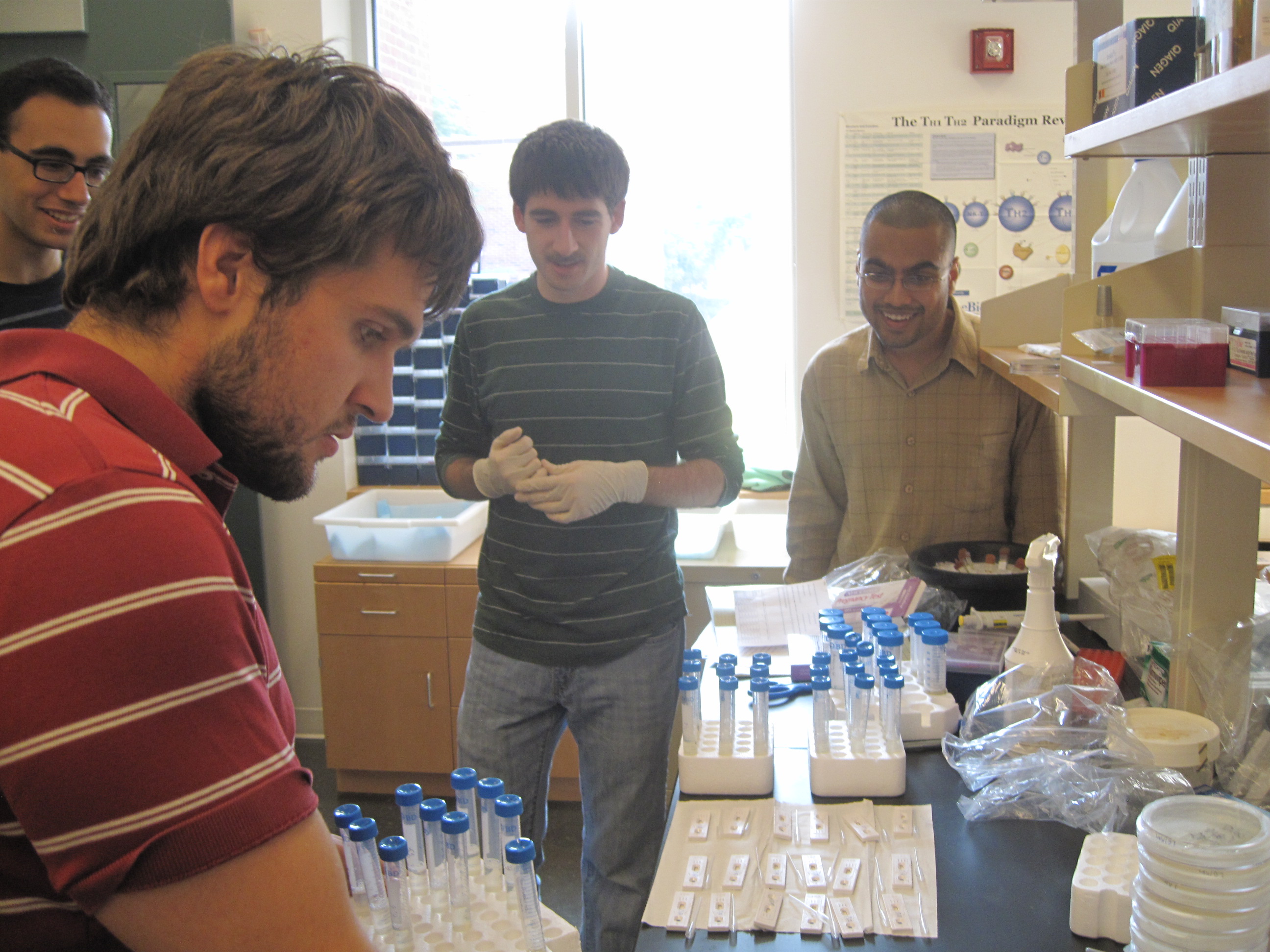 Members of the IGEM team spent much of the summer in a lab at the Robert M. Berne Cardiovascular Research Center.

A new and unexpected method of detecting whooping cough, developed by seven University of Virginia students, got a lot of attention this fall at regional and worldwide competitions sponsored by iGEM, or International Genetically Engineered Machines.

Their unexpected and innovative project earned them lots of notice at the Americas East Regional Jamboree, held in October at Duquesne University in Pittsburgh, where they shared the award for “Best Experimental Measurement Approach.” Out of the 44 teams competing, VGEM placed in the top four and won a silver medal.

“We were surprised by how well we did, considering we had to compete against schools like M.I.T and Cornell,” said Shaun Moshasha, a fifth-year biochemistry and physics double major in the College of Arts & Sciences. “We did much better than we expected.”

In November, the team won the top honors at the U.Va. Entrepreneurship Cup. Competing as “PhageFlag,” the team beat out nearly 200 competitors for the $20,000 first prize.

iGEM was started as a small synthetic biology competition for undergraduate students in 2003 by students at the Massachusetts Institute of Technology. Since then, iGEM has grown to include more than 130 teams competing from all around the globe. Because of the increasing size of the competition, iGEM hosts five regional jamborees in October and a World Championship Jamboree at M.I.T in November for the teams that qualify.

U.Va's team has competed since 2007 and has won gold, silver and bronze medals at the regional level. This year, they were one of 14 teams selected from the Americas East Regional Jamboree to compete in the World Championship Jamboree, held Nov. 2-5.

“It was good to see that we did something really cool and interesting,” fourth-year biology major Jackie Grimm said. “When you get so wrapped up in your project, you forget it's cool, but lots of people were coming up to us at regionals, having heard about our project from other people.”

VGEM began formulating its 2012 project last spring during a chemical engineering research course that is required for all team members. Team leader Alex Zorychta, a fourth-year biomedical engineering major in the School of Engineering and Applied Science, described the class as a “crash course in synthetic biology lab techniques.”

Synthetic biology is a new field of research and technology that combines science and engineering to design new biological functions and systems not found in nature. “Some techniques in synthetic biology are so new, they are not in any textbook yet,” fourth-year biology and biochemistry Joe Muldoon said. “It's a new field and there's really a lot out there to discover.”

During the summer, the seven team members worked in biomedical engineering professor Kim Kelly's lab at U.Va.’s Robert M. Berne Cardiovascular Research Center and the lab of School of Medicine professor Dr. Erik Hewlett to develop their project and conduct the majority of their research. The team decided to work with bacteriophages – viruses that invade bacteria – and engineered the T7 bacteriophage to express a version of the beta subunit of human chorionic gonadotropin (hCG), a hormone produced during pregnancy.

If the engineered bacteriophage invaded the bacterium that cause whooping cough, it would produce the hCG marker, which could then be detected even in low concentrations by over-the-counter pregnancy test kits – cheap and readily available at most drugstores, unlike current methods of diagnosing whooping cough, which are complicated and expensive.

Besides pertussis, this method can be used to detect any bacteria and its potential bacteriophage.

Through producing digital diagrams, the team modeled the affect this new detection method would have on the population, showing that the repurposed pregnancy tests would provide faster and cheaper detection of whooping cough, saving thousands of lives. The efficient, low-cost nature of their method would be especially beneficial in developing countries, where whooping cough is more prevalent and harder to diagnose.

“This summer was a really rare opportunity,” Zorychta said. “We weren't treated like undergrads. We had control over the lab and our research.”

“This is completely student-run,” Moshasha said. “There was no one over us, telling us what to do.” The mentors “would just answer our questions when we had them.”

“It's amazing when you think that it is undergraduates, working just May through August, who produce this work,” Muldoon said.

Although VGEM did not place at the World Championship Jamboree, the team was excited to represent its project and U.Va., and to have the opportunity to network with students from around the world and see the other projects, Zorychta said.

This year, the iGEM Foundation also hosted competitions for entrepreneurs and high school students for the first time. Zorychta said that they hope to send an entrepreneurial team next year, in addition to the traditional undergraduate team.