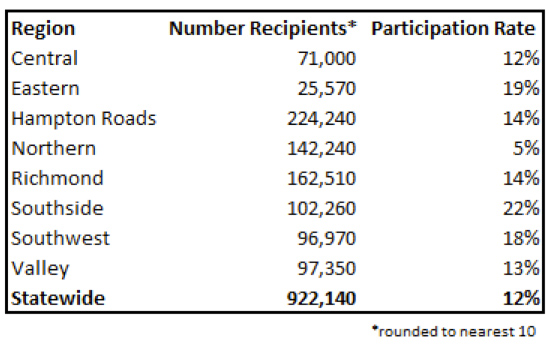 Slightly more than one in 10 Virginians receives monthly benefits from the Supplemental Nutrition Assistance Program, commonly known as food stamps, according to University of Virginia researchers in the Weldon Cooper Center for Public Service’s Demographics Research Group. SNAP payments in Virginia in 2012 totaled approximately $1.2 billion, as reported by the Virginia Department of Social Services.

This finding and others related to SNAP benefits across Virginia are detailed in a Census Brief released today, the second in a series of short publications depicting trends in census and other data of interest to the commonwealth.

SNAP provides monthly subsidies to individuals and families in or near poverty, specifically for the purchase of food; a family of four in Virginia with a net monthly income of $1,963 or less is eligible for benefits. Individuals recently unemployed are eligible for only a limited time.

“SNAP benefits provide essential support to families and individuals in Virginia who live in or near poverty,” said researcher Annie Rorem, who prepared the brief. “In three- quarters of Virginia households receiving SNAP benefits, at least one family member was employed – suggesting that these benefits are, in fact, supplemental support for a basic need: food.”

“Resources from the American Reinvestment and Recovery Act (commonly known as stimulus funding) disappeared last October, at the beginning of fiscal year 2014,” said Qian Cai, director of the Demographics Research Group. “As a result, Virginia’s SNAP budget was cut by an estimated $99 million (7 percent). Until the arc of economic recovery improves and individuals find greater opportunities to boost their economic well-being, these cuts will place additional strain on Virginia families already at the boundary of financial crisis.”

What Is Biotechnology? Where Is It Headed at UVA? END_OF_DOCUMENT_TOKEN_TO_BE_REPLACED