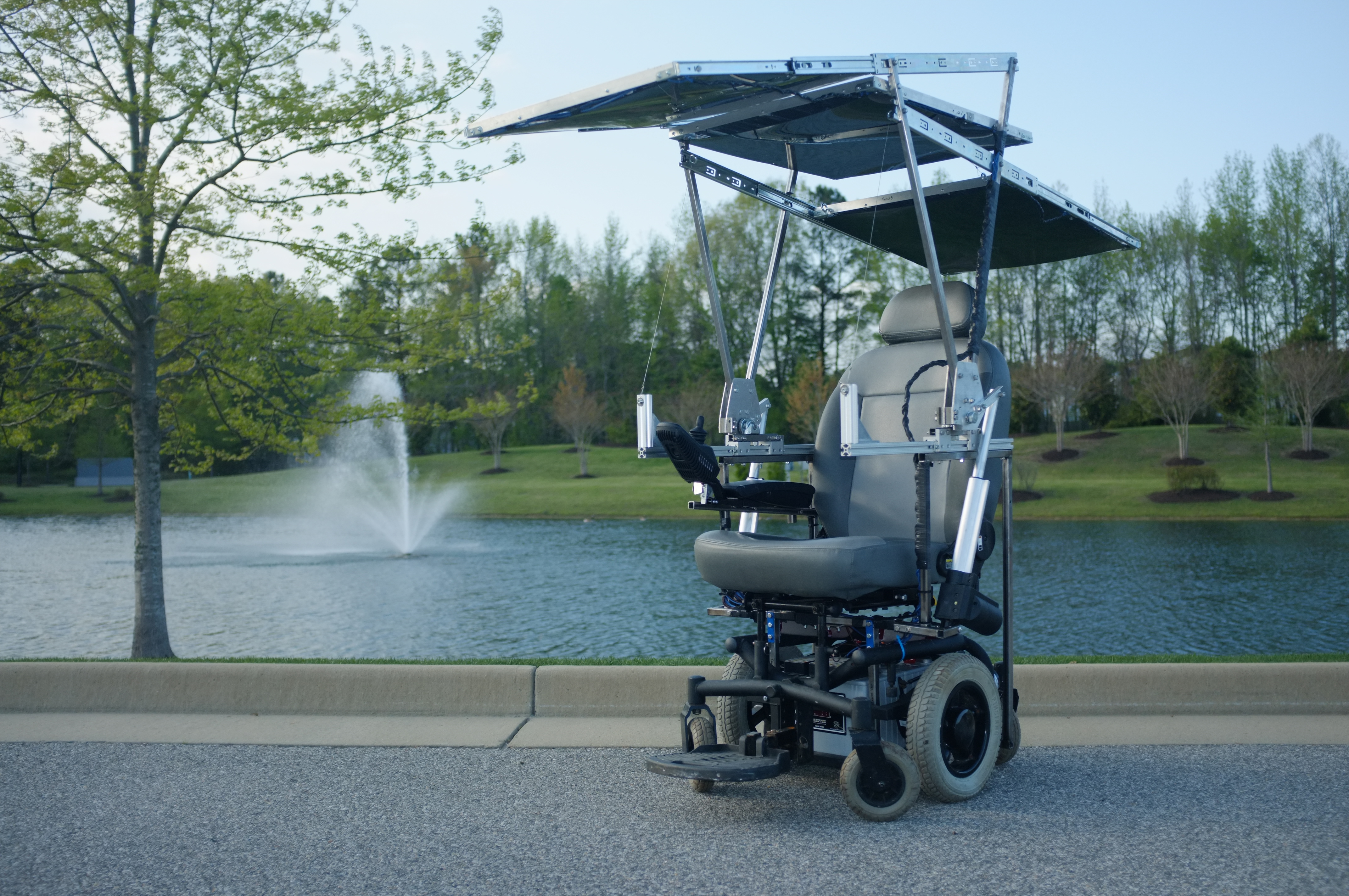 A student team at the University of Virginia’s School of Engineering and Applied Science won first place in the 2012 World Cerebral Palsy Day “Change My World in One Minute” competition for its design of a solar-powered wheelchair with retractable panels.

Seventeen million people worldwide live with cerebral palsy, a permanent disability that affects movement ranging from a weakness in one hand to an almost complete lack of voluntary movement.

World Cerebral Palsy Day was established in 2012 with an invitation for people with CP, their families and friends to post ideas online for something that could be created, developed or modified that would change the world for someone with a disability. Ideas were posted as text or video, with the specification that each idea could take only one minute to read or watch.

In early September, people were encouraged to go online, review the submitted ideas and vote for the concepts that could have the greatest impact on people’s lives – and more than 5,800 votes were cast for the 473 ideas submitted.

At the end of September, the World CP Day Panel reviewed the ideas and the public votes and selected three ideas to be shortlisted for development: a fold-up motorized wheelchair, a documentary on cerebral palsy in the 21st century and a wheelchair with solar power.

Social activists, researchers, inventors and innovators were then invited to turn the shortlisted ideas into reality.

“Our team worked closely together to come up with a solution for this challenging engineering problem in a very limited time,” said graduate student Dennis L. Waldron III, a member of the U.Va. team. “Although not required for the competition, we chose to build a prototype to test our design, and refined or completely changed certain aspects as we built, sometimes multiple times.”

The winners were announced April 27 at United Cerebral Palsy’s International Conference in San Diego, with U.Va.’s first-place entry receiving $20,000 from a total prize pool of $25,000.

The U.Va. team included electrical and computer engineering graduate students Waldron, Duncan McGillivray, Craig Ungaro and Ankit Shah, who work at the National Institute of Aerospace and NASA-Langley Research Center, and undergraduate mechanical and aerospace engineering students Maria Michael and Kyung Kim. Electrical and computer engineering professor Mool Gupta, the Langley Professor in Residence at U.Va. and at the National Institute of Aerospace in Hampton, advised the team.

The team built the device primarily at the National Institute of Aerospace’s Research and Innovation Laboratories Facility in Hampton. The project received support from the Engineering School’s Experiential Program, through funding from alumnus Linwood “Chip” Lacy, with Gupta providing additional financial support through his faculty funds and industry support.

“This team of graduate and undergraduate students have created a device that will truly benefit those with disabilities,” Engineering School Dean James H. Aylor said. “The students on the team are excellent examples of the type of engineer we strive to produce in the U.Va. Engineering School – innovative leaders who are agents of change in society. I am thankful for the World CP Day organization for giving them this opportunity and for the National Institute of Aerospace for providing laboratory space.”

Team member Waldron, too, was thankful. “We are grateful for the opportunity to get our hands dirty and work on something with such great potential to help others,” He said. “That’s what engineering is all about.”

The wheelchair concept was inspired by the design of retractable roofs on convertible cars. The chair uses lightweight and robust materials and high-efficiency solar cells with custom-fabricated solar panels that encompass over one square meter when deployed without adding significantly to its length, width, height or weight when stored. The wheelchair can operate for more than 4½ hours at a speed of 5 mph on a fully charged battery, a range increase of more than 40 percent over batteries alone, and can run indefinitely at a speed of 1 mph on solar power alone, without using the battery.

The solar panels charge batteries even under cloudy conditions and have the added benefit of providing shade for the wheelchair occupant on sunny days. The single switch operation means that anyone who can use a joystick can operate the chair. The overall design includes standard wheelchair amenities such as a seatbelt, armrests, footrest and adjustable seating. In addition, USB power outlets are provided to charge modern peripherals such as cellphones, GPS navigation, tablet computers and items such as a fan and a reading light. An invention disclosure has been filed through the U.Va. Licensing and Ventures Group.

The team intends to use its prize money to make final refinements to the chair and to ship it to Alper Sirvan, the individual in Turkey who posted the initial suggestion for a solar-powered wheelchair. The remaining prize money will be returned to United Cerebral Palsy in support of future World CP Day competitions.

“United Cerebral Palsy is thrilled to present this award to the University of Virginia for their creation of a solar-powered wheelchair as part of the first World Cerebral Palsy Day’s ‘Change My Life in One Minute’ invention contest, which focused on concrete, attainable ideas that could change people’s lives,” said Stephen Bennett, president and chief executive officer of United Cerebral Palsy. “We are very proud to say that, together with the incredible efforts of the University of Virginia, Professor Gupta and all of the students and partners involved, one of these ideas has been brought to life.

“It is truly inspiring to hear of the team’s decision to use the prize money to send the wheelchair to the man who inspired the idea and to return the remaining funds. I applaud these extraordinary individuals for their work, and appreciate their efforts in helping to ensure that people living with cerebral palsy can live their lives to the fullest.”

A video of the team’s entry is available on the World CP Day YouTube Channel. The brochure they created and the team’s project report are also available. The video that accompanied the original project suggestion is available at worldcpday.org.