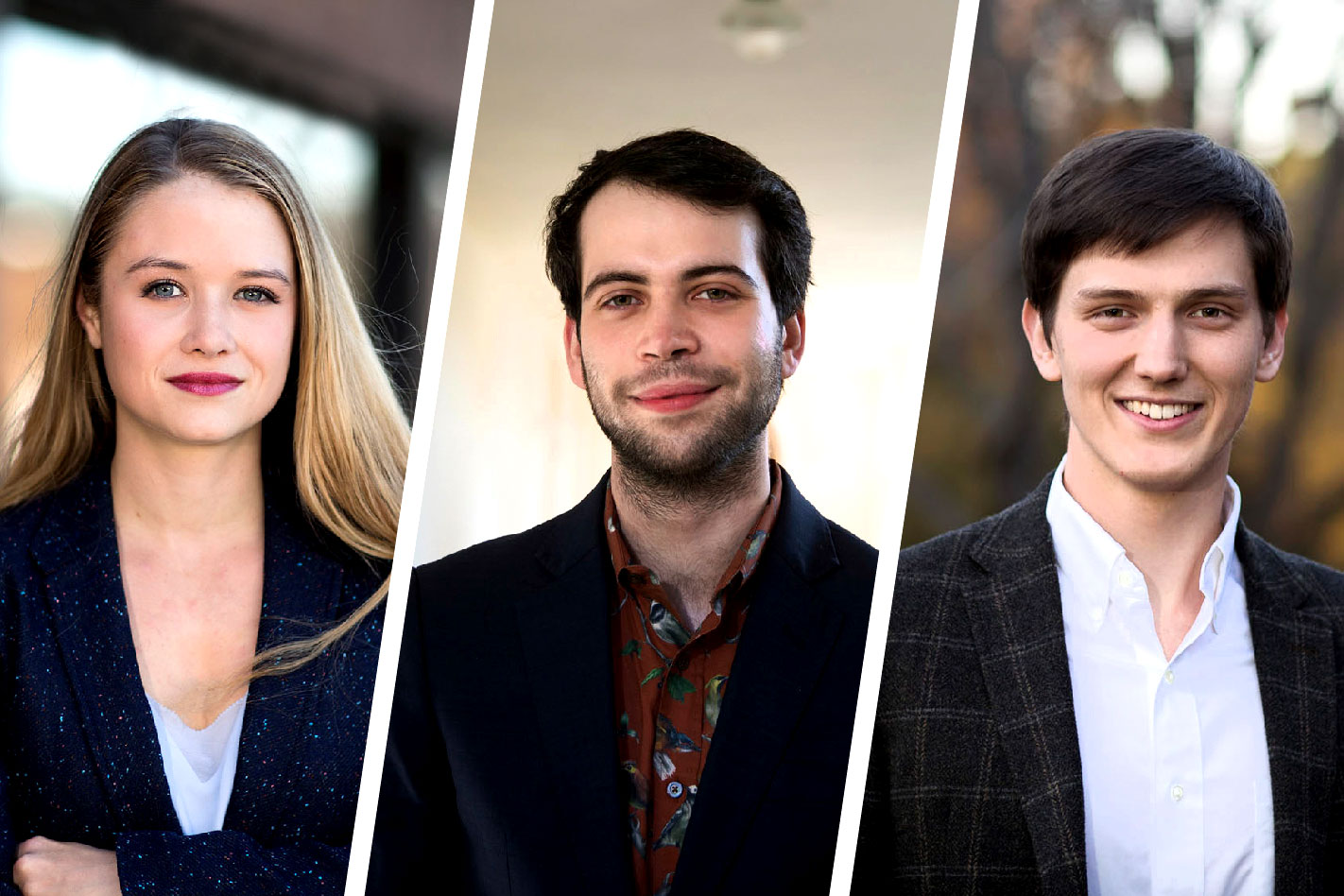 University of Virginia students William Henagan, Abraham Axler and Sarah Koch have received Marshall Scholarships to pursue graduate study in the United Kingdom – marking the first time the University has had three students selected to receive the prestigious scholarships in a single year.

Henagan, 22, of Atlanta, earned his undergraduate history degree from UVA and is a first-year graduate student in the McIntire School of Commerce. Axler, 21, of New York City, is a fourth-year politics honors major in the Woodrow Wilson Department of Politics. Koch, 21, of Kansas City, Missouri, is a fourth-year Middle Eastern language and literature major in the Middle Eastern and South Asian Languages and Cultures Department.

“Each of them has demonstrated the capacity to be a wonderful ambassador to the U.K., which made them perfect for the Marshall Scholarship. I hope future students will see in them three students who fit the criteria for an award, persevered through the challenges and applied themselves.” — Andrus G. Ashoo, associate director of UVA’s Center for Undergraduate Excellence

Marshall Scholarships, which finance American students studying in the United Kingdom, cover university fees, cost-of-living expenses, annual book grants, thesis grants, research and daily travel grants, as well as fares to and from the United States. Regional committees, comprised of British consular personnel and former Marshall scholars, select up to 40 scholars each year to study at graduate level at a United Kingdom institution in any field of study.

“Abraham, William and Sarah are great students and people, and each of them has demonstrated the capacity to be a wonderful ambassador to the U.K., which made them perfect for the Marshall Scholarship,” said Andrus G. Ashoo, associate director of UVA’s Center for Undergraduate Excellence. “I hope future students will see in them three students who fit the criteria for an award, persevered through the challenges and applied themselves. I’m proud to know them and I look forward to what they will do with this exceptional opportunity.”

Henagan, as a history undergraduate at UVA, focused his research on development of industrial agriculture during the 20th century, sustainable agriculture and the political food economy.

Henagan earned his history degree in 2½ years and, before starting his master’s program, spent nine months working as an intern in the Obama administration – first as a policy intern in the Office of the First Lady, and later in the Department of Commerce’s Economic Development Administration, where he worked “on a focused assignment targeted at mill closures in the northern forest economy in Maine,” he said.

At UVA, Henagan combined his knowledge of agriculture and his urge for entrepreneurship in creating Greens to Grounds, a student-run organization to connect local farmers and the University community, providing fresh, local produce on a weekly basis. He said he plans to duplicate this project when he gets to England.

“I have had a very practical education and I am excited by the opportunity to throw myself into my coursework,” Henagan said. “To complete my education, I feel that I need to shore up several intellectual gaps in my understanding of policymaking. I plan to go to the United Kingdom to study politics, entrepreneurship and public policy. Afterward, I will be returning to the U.S. to begin a career in public service.”

A Range resident, Henagan is a member of the Raven Society, Phi Beta Kappa, TEDxUVA, Social Entrepreneurship @ UVA and the UVA Pay for Success Lab. He is an Ernest H. and Jeanette P. Ern Jefferson Scholar, a Center for Global Health Scholar and an Echols Scholar.

He is also a member of One in Four, an all-male sexual assault peer education group; the Sexual Violence Prevention Coalition; a Madison House volunteer; a participant in Sustained Dialogue, a weekly discussion group; HackCville; Entrepreneurship Group; the Jefferson Literary and Debating Society; UVA club rugby; and the University Board of Elections. He is a recipient of a Jefferson Trust Grant, a Double ’Hoo Award and a Green Initiative Funding Tomorrow Grant.

Henagan wants to influence agricultural policy when he returns to the United States.

“Will has exhibited some of the most important qualities of a rising social entrepreneur,” said Christine Mahoney, associate professor of public policy and politics in UVA’s Batten School of Leadership and Public Policy and director of Social Entrepreneurship @ UVA. “In establishing his social venture, Greens to Grounds, he developed a creative solution to two problems simultaneously: the difficulty small farmers have getting their goods to market, and the difficulty students have accessing fresh, healthy, local produce.”

Mahoney praised him for working out the details of the enterprise, but not stopping there.

“Seeing an additional opportunity to grow and support more farmers and more students, he expanded the venture to reach low-income students through a partnership with the University,” she said. “He expertly blended non-profit and for-profit thinking to create significant value for our community.”

“He is both extremely intelligent and hard-working,” Zunz said. “He has an engaging and generous personality, and a quiet determination to succeed while doing something good for the world.”

Axler is writing his thesis on voters’ perceptions of transgender candidates with a focus on developing optimal media strategies for them. Axler said he has pursued an eclectic education at UVA and now he wants to focus more.

“I have had a highly theoretical education in Politics Honors, and I have taken classes in everything from Native American art to fundraising,” he said. “Now I want to focus on social and housing policy and learn how to articulate policy options and be persuasive.”

Axler hopes to return to New York City to help shape policy for the city.

A Lawn resident, Axler was president of Student Council; Class of 2017 president; a moderator for Sustained Dialogue; a member of the Virginia Alcohol Beverage Control Law Enforcement Review Panel; a member of the Jefferson Literary and Debating Society appropriations committee; and a member of the Raven Society. He is an Echols Scholar and William H.P. Young Jefferson Scholar, a Meriwether Lewis Fellow and a recipient of a Harrison Undergraduate Research Award and a Jefferson Trust grant.

“He’s one of the most curious and articulate students I’ve ever worked with,” Alexander said. “He’s a strong student in the Politics Honors program, and I know he’ll take his interest in studying politics forward into the tremendous opportunity that a Marshall Scholarship represents.”

Koch, who has focused her education on Arabic and Persian, is planning a career in the U.S. Army.

“I am writing a thesis on the relationship between soldiers and their translators, and the State Department’s failure to support and protect them through the Special Immigrant Visa Program for Iraqi and Afghan translators,” Koch said.

Koch, who is a leader in the Army ROTC program, will be commissioned as a second lieutenant in the Army’s Military Intelligence Corps in May.

“Before entering active duty, I hope to complete master’s degrees in Oriental studies and refugee and forced migration studies at Oxford,” she said.

This will contribute to her career path, which includes serving as a military intelligence officer and then moving into the Army’s civil affairs department.

“Civil Affairs falls under the Army’s Special Operations Command and has been referred to as ‘the warrior diplomats’ of the Army,” she said. “Its units undertake tasks such as foreign humanitarian assistance, nation assistance, population and resource control, civil information management and support to civil administration. I would be a link between the field commander and the area of operation’s civil authorities.”

Koch said this would give her an opportunity to use her “interpersonal skills to engage tribal leaders, village elders and other community members face-to-face. By building rapport with a foreign community, I can help accomplish the mission while providing aid to and protecting the area’s civilians.”

At UVA, Koch has been an executive officer in the Army ROTC program; president of the UVA Cadet Association; vice chair of the Undergraduate Research Network; co-chair of the Women’s Leadership Development Program; founder and organizer of the R.J. Hess Memorial 5K race; an English as a second language tutor for Volunteers with International Students, Staff and Scholars; and a member of the Raven Society.

A Lawn resident, Koch is the Frank and Ann Hereford Jefferson Scholar and an Echols Scholar. She ranked seventh out of 5,508 cadets in the U.S. Army ROTC National Order of Merit, as well as being and ranked among the top 15 percent of ROTC Advanced Camp, the highest possible rating for Army ROTC cadets during their summer leadership course. She has received a Harrison Undergraduate Research Award, a Minerva Award for Research, two Superior Cadet awards and a Professor of Military Science Award.

Catarina Krizancic, a cultural anthropologist and coordinator of student research and service learning activities abroad in the International Studies Office, praised Koch as a highly creative thinker, a courageous and empathetic observer and self-disciplined.

“In character, intellect and action, she combines creativity, focus, self-direction and drive like no other student I have worked with, and I have no doubt that she has the capacity to carry out every endeavor, whether academic or in public service, that she sets her heart and mind to,” Krizancic said.

Substantially funded by the British government, the Marshall Scholarships honor the ideals of U.S. Army Chief of Staff Gen. George Marshall, who in 1947 proposed the idea of American economic assistance the help rebuild post-war Europe.