U.Va. Undergrads Try a Slice of Each Other’s Research 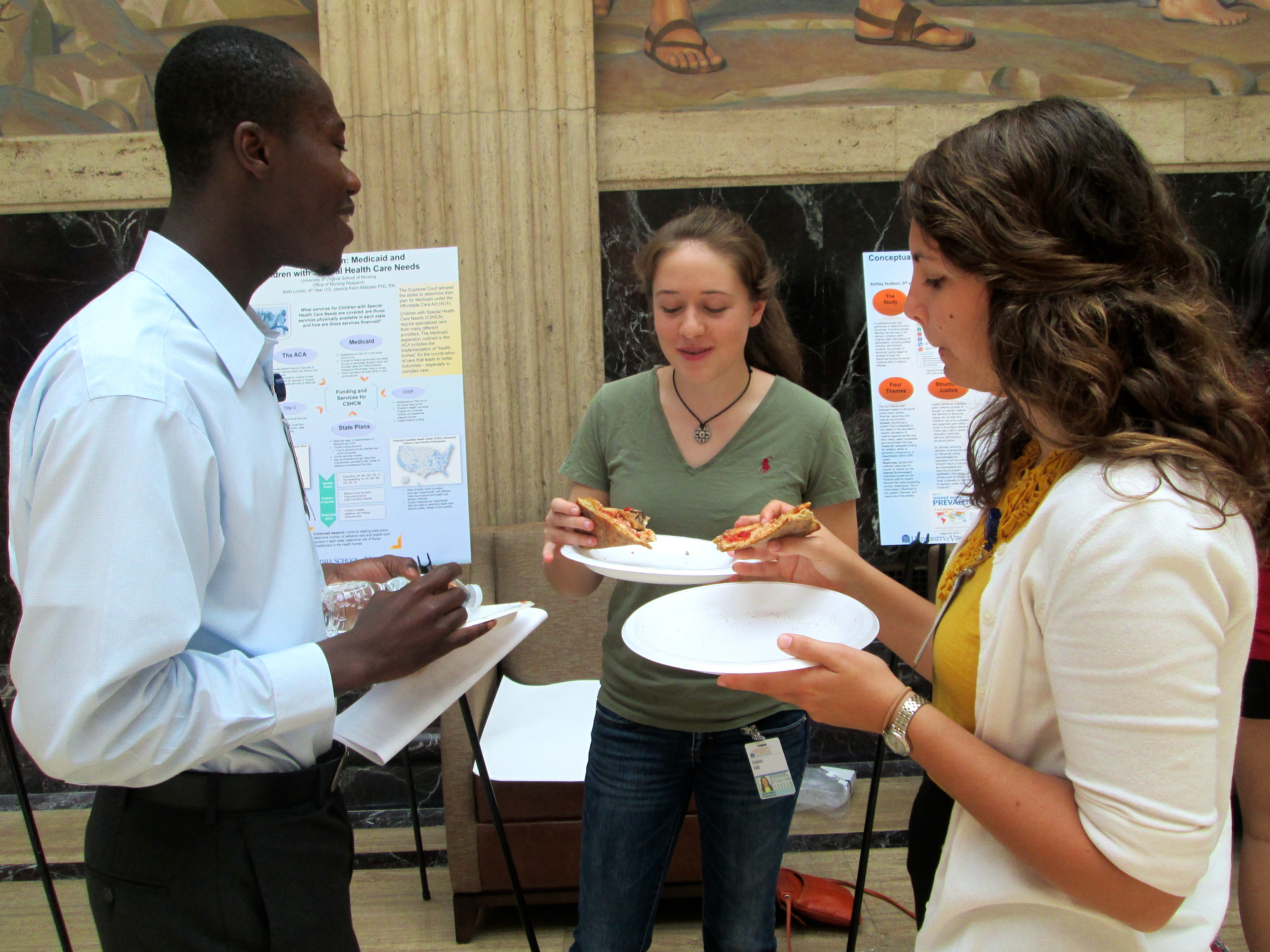 Undergraduates munch on pizza and check out each other&amp;rsquo;s research projects in the Clark Hall Mural Room.

­Today more than ever, students are seeking to build their résumés while they’re still undergraduates – and the most crucial time to do so is during the summer months.

And instead of going elsewhere to find work, many University of Virginia students have found research opportunities on Grounds.

To celebrate the skills they’ve learned and projects they’ve completed as their summer internships wind down, U.Va. research interns gathered Tuesday to give peer-to-peer research presentations. In this “Posters and Pizza” event, half of the students displayed posters explaining their faculty-supervised research in an informal, walk-around setting, then switched and heard from the other half of the group.

“Events in which students can share their research experiences allow them to learn about different fields and approaches to particular topics of inquiry, and to engage with new ideas directly from their peers,” said Brian Cullaty, director of the Center for Undergraduate Excellence, which helped organize the event. “This type of work prepares students effectively for their future endeavors, including graduate study and careers that require innovative leaders.”

The students’ topics included the effectiveness of healing touch and yoga, the effects of victimization of school-age girls, self-esteem in middle school, the potency of tutoring and mentorship for underprivileged youth, to name a few.

Beth Loudin, a rising fourth-year nursing major, has been examining the health care coverage available to children with special health needs since the passing of the Affordable Care Act. The act required that states broaden their care, but a 2012 Supreme Court ruling declared that states have the right to decide how to go about this change. Loudin has been mapping care across the states, examining what states are now allowing versus what is actually available, as part of a research project being conducted by Jessica Keim-Malpass, an assistant professor in the School of Nursing who shares Loudin’s interest in pediatrics.

“There’s a definite disparity between what’s covered and what’s provided,” Loudin said. “But the states are still trying to interpret the act, and I’m trying to interpret what they’re interpreting. ... Hopefully by bringing awareness to the disparities, states will be able to answer for them and make more health care for special needs children available.”

Loudin was one of the eight undergraduates selected this year for a competitive summer internship with the School of Nursing’s Office for Nursing Research. During their internships, students engaged in activities ranging from conducting literature reviews to interacting with human subjects, from tackling data entry to taking blood samples to filing and processing payments.

Across the floor, Keena Jones, a rising senior from Clark Atlanta University in Atlanta,  was one of eight Summer Undergraduate Research Program interns in the Young Women Leaders Program under Curry School professors Nancy Deutsch and Joanna Williams.

“This summer has given me really great skills and experiences,” said Jones, who ran a regression analysis on middle-school aggression and victimization, and their correlations with academic performance. She found that those who feel bullied at school will see their academic performance drop, while it was hard to predict where aggressors would fall on the academic spectrum.

A psychology major, Jones’ interest in educational psychology led her to apply to the eight-week internship program, which hosts students from underrepresented populations in education research and provides them with an intensive summer research experience to prepare them for graduate school. Interns work with U.Va. faculty and graduate student mentors in a lab or on a project, and they grow their skills in a free GRE course, statistics workshops and other seminars.

But Loudin and Jones’ projects only showcased a slice of research going on around Grounds this summer.

“While we don’t have an accurate way of knowing how many U.Va. students are here on Grounds doing research, we know there are a lot,” Cullaty said.

The event was sponsored by the Center for Undergraduate Excellence and by the Graduate Student Diversity Program in the Office of the Vice President for Research.