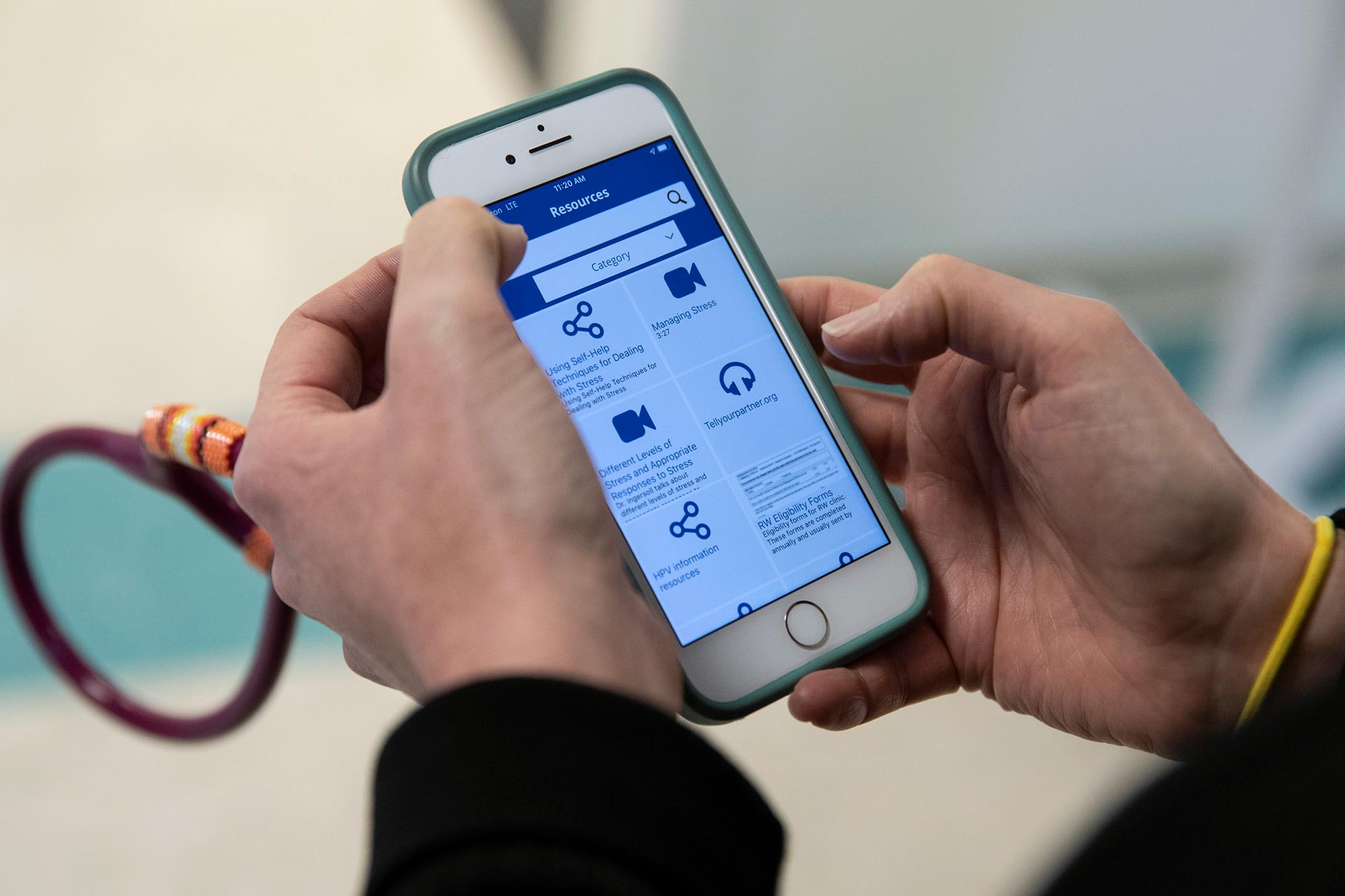 Kelly Kendrick was studying to become a licensed esthetician in Charlottesville when he was diagnosed with HIV, the virus that causes AIDS.

Speaking on the phone from his new home in Ohio six years later, Kendrick still remembers how he felt when he got the news six years ago.

“Horrible,” he said. “I felt pretty much alone.”

But Kendrick said those feelings slowly melted away when he began receiving treatment at the University of Virginia’s Ryan White HIV Clinic. Today, he is healthy and has his HIV in check – thanks to some critical information he received during his first appointment at the clinic.

Kendrick was introduced to a novel UVA-created smartphone app called PositiveLinks, which is put directly into the hands of patients to help track their medical care as well as their mood and stress levels. The technology, which also has a provider-facing function, has led to dramatic improvements in the care outcomes for UVA patients just like Kendrick – so much so that it is now being used across Virginia and in other parts of the world.

The creators of the app, Dr. Rebecca Dillingham and Karen Ingersoll, who holds a doctorate in clinical psychology, are the recipients of this year’s Edlich-Henderson Innovator of the Year award. Bestowed by the UVA Licensing & Ventures Group, the endowed award recognizes University faculty members or a team of faculty researchers whose work is making a major impact on society.

Dillingham and Ingersoll said PositiveLinks helps people living with HIV to be engaged in their care by keeping them connected to their clinic and doctors, as well as with a community of people who are living with the disease. They said that’s important in a world in which the Centers for Disease Control and Prevention says only 49% of HIV-positive people in the U.S. are engaged in care.

“When people remain engaged in HIV care, they typically achieve viral suppression,” Ingersoll said. “Their own health is protected and they can live a normal lifespan. Additionally, once a person achieves and maintains viral suppression, they are unable to transmit the virus to others. That could lead us to see the end of AIDS, which is a goal worldwide.”

In fact, Ingersoll, who is a psychologist in the Ryan White Clinic, pointed to a Centers for Disease Control and Prevention metric that shows patients who entered care quickly after an HIV diagnosis and remained in care across their lifetime saw the largest rates of viral suppression. 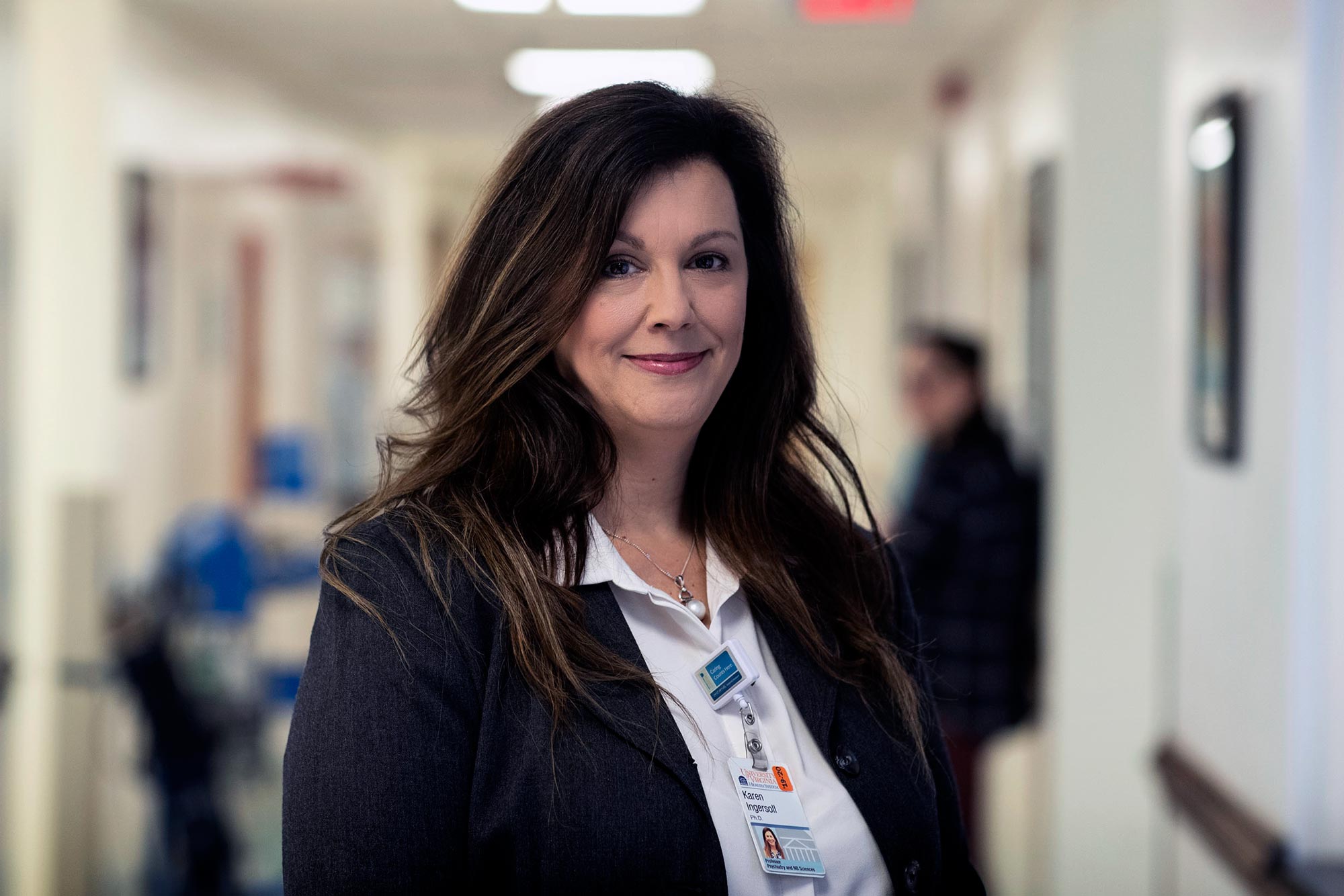 Dillingham and Ingersoll said their patients helped them develop and test PositiveLinks, which built on their experiences developing text-message-based interventions. Initially, Ingersoll said patients reported feelings of isolation, under the mistaken belief that they did not know anyone else living with HIV. This led the team to create an anonymous community messaging board as part of PositiveLinks.

“We felt it was important to give patients a safe space to talk with other people going through the same things they were. And actually, that’s become our most-used and popular feature,” she said.

Because the app complies with the confidentiality provisions of the Health Insurance Portability and Accountability Act, or HIPAA, patients can also send secure messages to health care providers who work in the clinic, be they infectious diseases doctors like Dillingham, nurses or community health workers. Most of these providers are using the PositiveLinks platform, either on a “provider app” or a web-based portal, enabling them to respond to patient messages or to send patients secure messages.

“It looks and feels like texting, but it’s within the app, so it is secure,” Ingersoll said.

“When people remain engaged in HIV care, they typically achieve viral suppression. Their own health is protected, and they can live a normal lifespan.”

A newer feature enables patients to directly upload important documents that help them confirm eligibility for Ryan White health care benefits, a Health Resources & Services Administration program for lower-income patients. The benefits fund not only basic HIV care, but things like mental health and substance abuse services. All of the features on the app are designed to help patients remain engaged and linked to health care for their lifetimes.

PositiveLinks Spreads Across the Country and Beyond

In 2018, the UVA Licensing & Ventures Group launched Warm Health Technology with support from the UVA Health System and licensed the PositiveLinks software to disseminate the mobile platform to clinics around the country. In addition to clinics in Virginia, PositiveLinks is also being used in Greenville, South Carolina, through Warm Health Technology.

Launching the company also enabled access to additional resources to support further development of the app. Thanks to a grant from the Elton John AIDS Foundation, Warm Health has been able to provide a version of the app to more than 1,000 patients in Irkutsk, Russia, as well. The Virginia Department of Health is supporting a Spanish language adaptation of the app.

“What we find so compelling about this technology, and the reason we decided to fund Warm Health Technology, is that it serves as a force multiplier for UVA clinicians,” Jeff Keller, chief innovation officer for the UVA Health System, said. “Many Virginians using the app lack access to even basic care; PositiveLinks allows them to have daily touchpoints with the deep clinical expertise of our specialist physicians and nursing staff here at UVA.

“This technology could be a major piece of the puzzle in reversing the alarming growth in HIV infections nationally.”

PositiveLinks’ reach is also being felt internationally. “We are fortunate to have a cohort in Uganda, where we’re working with colleagues to improve support for people living with HIV who also have hypertension,” Dillingham said. “In addition, we partnered with a clinic in rural South Africa to create a language and cultural adaptation for communities that speak the IsiZulu language. So, we now have English, Spanish, Russian and IsiZulu versions for testing and use.”

And the growth isn’t stopping. Dillingham and Ingersoll just received a National Institutes of Health grant with their colleague Dr. Barbara Taylor, who works at the University of Texas-San Antonio Long School of Medicine, to modify and test PositiveLinks for Latinx adolescents and young adults living with HIV. 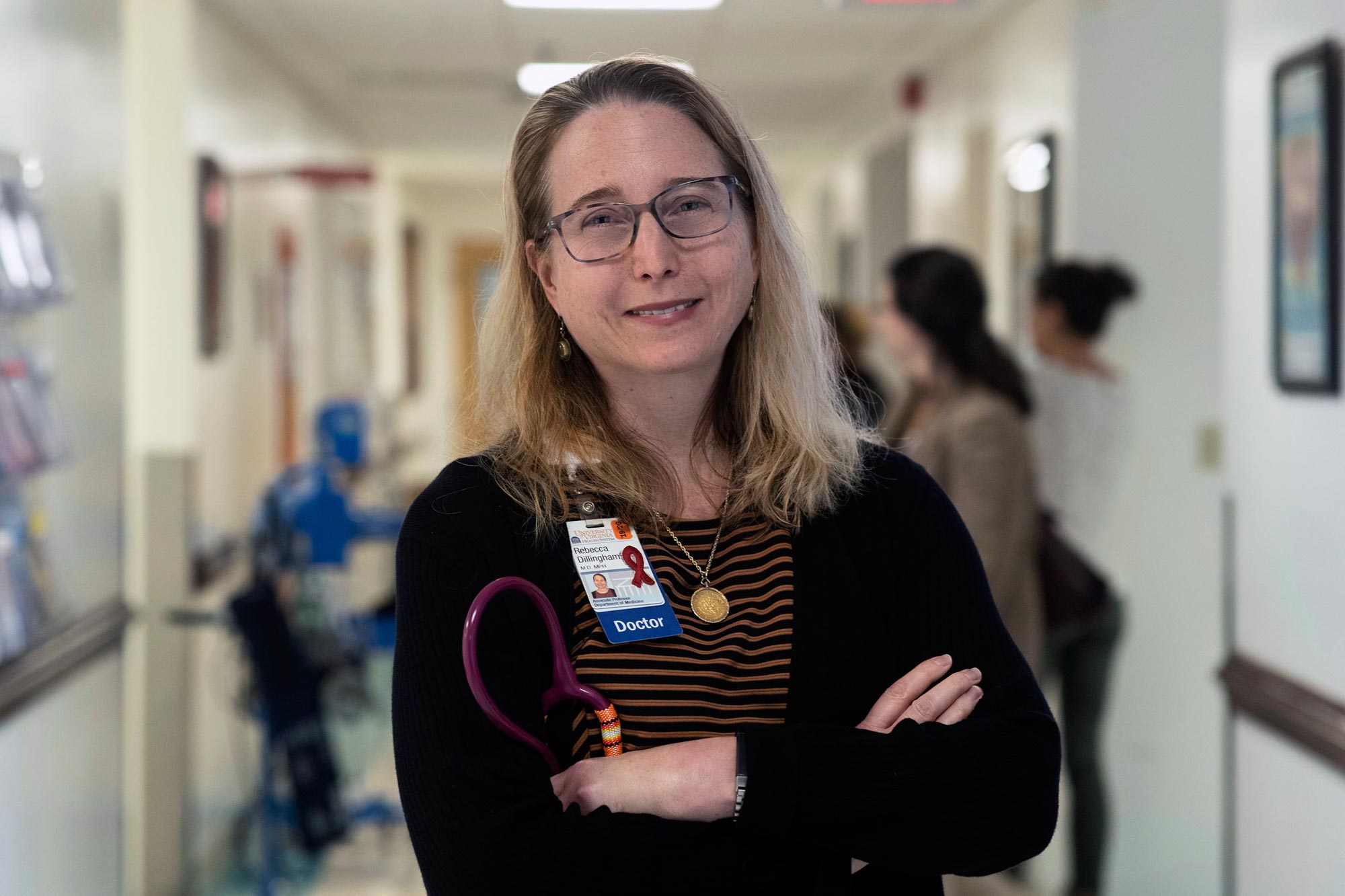 “We also have a collaboration with colleagues in Colorado to explore how PositiveLinks can support adolescents in transition from pediatric to adult care, and women who are living with HIV and pregnant, as they transition from specialty care back to their usual care following delivery,” Dillingham said.

The need for support systems like PositiveLinks is only going to continue to grow in the United States; thousands of new HIV infections are reported each year.

“Unfortunately, the incidence in terms of the number of new infections – speaking only about the United States here – is stable, which is a bad thing,” Dillingham said.

“We have a real opportunity to end the epidemic with the tools that we have right now, which include effective prevention methods like ‘PrEP,’ which is preexposure prophylaxis – medication that can be taken to prevent acquisition of HIV,” Dillingham said. “Just as importantly, if people are truly engaged with HIV care, the medication and wrap-around services available can restore the immune system and a full, healthy life, making it impossible to transmit the infection.”

Virginia Department of Health Is Clutch Player for PositiveLinks

Having access to a smartphone is key, which is why the Virginia Department of Health agreed to support phone access for those who could not afford it otherwise. Dillingham said that while an app on a smartphone might seem like a luxury, it is an essential component to accessing health care. Having a smartphone, often the only way low-income populations access the internet, helps break down structural barriers like securing housing and applying for jobs.

PositiveLinks also provides information about food and mental health resources in the community.

“Where we are with PositiveLinks could never have been achieved without the ongoing and visionary support of the Virginia Department of Health,” Ingersoll said. “Early on, Virginia Department of Health leaders in HIV Care Services recognized the potential of PositiveLinks and the potential for it to really help provide care and reduce transmission across our commonwealth.”

“Many Virginians using the app lack access to even basic care; PositiveLinks allows them to have daily touchpoints with the deep clinical expertise of our specialist physicians and nursing staff here at UVA.”

In keeping with that, the department provided supplemental funding for PositiveLinks as well as support for other clinics in Virginia to use the app.

Back in Ohio, Kelly Kendrick said he was already missing the team at UVA’s Ryan White HIV Clinic. “When I went to the clinic, seeing the smiling faces at the clinic, Dr. Dillingham – everyone at the clinic was amazing,” he said.

His new clinic does not offer PositiveLinks and Kendrick wants to change that. “I wouldn’t mind being a PositiveLinks coordinator for Cleveland,” he said.

“To be honest with you, before I was diagnosed, I never went to the doctor. I’d never witnessed having to be an advocate for my health until getting PositiveLinks and being diagnosed. It’s opened my world and opened my eyes up, because there’s so many resources, not just for HIV care, but if you’re depressed. You can see other people post messages about how their day was. It’s just really great!”

“We have a real opportunity to end the epidemic with the tools that we have right now.”

In announcing the 2020 Edlich-Henderson Innovators of the Year last month, Michael Straightiff, executive director of the Licensing & Ventures Group, said, “Drs. Dillingham and Ingersoll have continuously innovated their original text-messaged-based intervention for nearly a decade alongside the rise of the digital health industry.”

“PositiveLinks pushes the boundaries on new-age solutions for the HIV care community and stands to significantly lower transmission rates among users of the app. This interdisciplinary research team has and will continue to enrich and improve lives with PositiveLinks, and we are thrilled to honor their accomplishments with this award.”

Dillingham and Ingersoll will deliver a public lecture about PositiveLinks on Feb. 18 at 3:30 p.m. at a celebratory event in the Dome Room of the Rotunda. The event is open to the public to welcome all community members, UVA faculty, staff, and students who wish to learn more. Attendees are encouraged to register in advance for the event.

What’s Next for UVA’s Class of 2022? END_OF_DOCUMENT_TOKEN_TO_BE_REPLACED