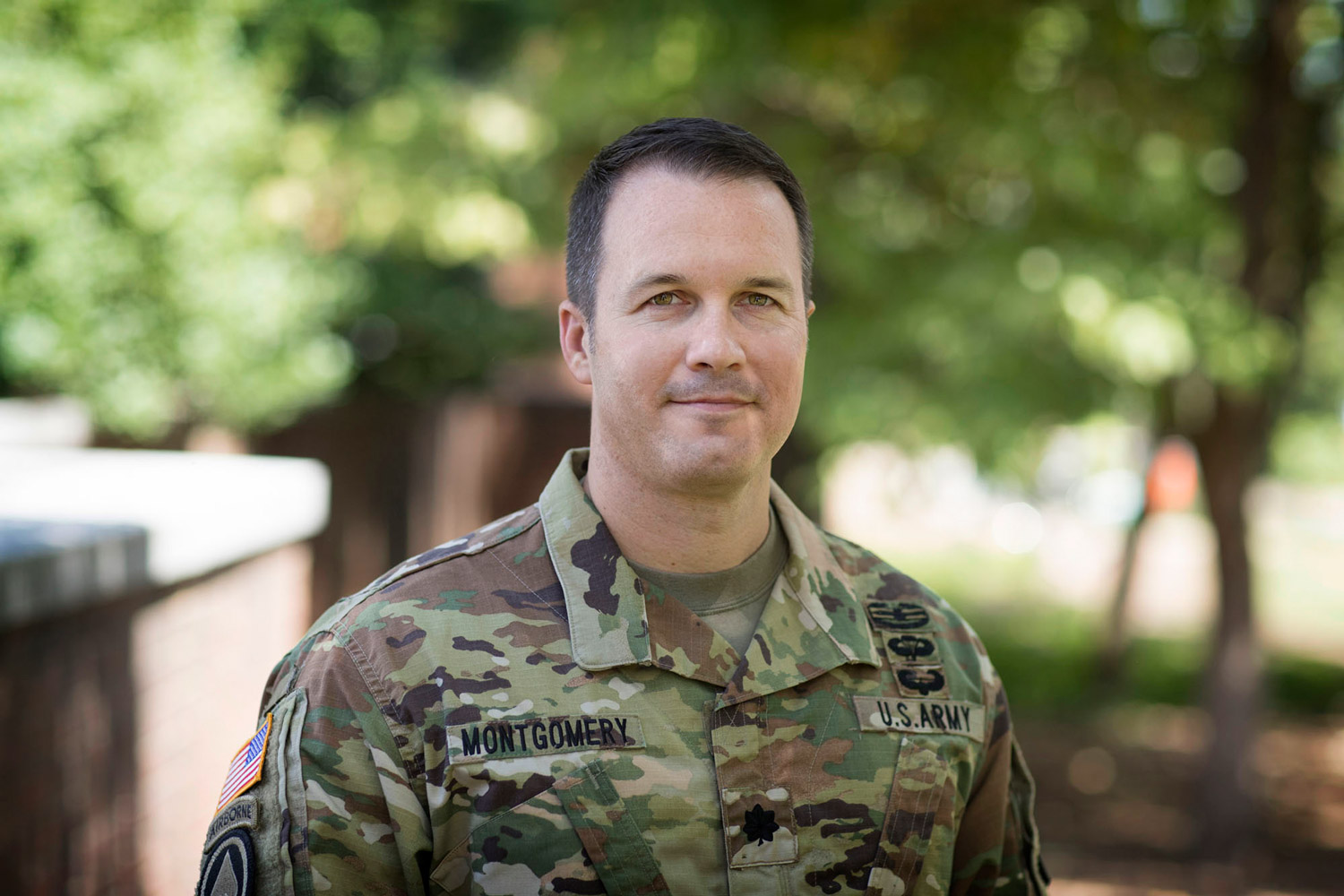 U.S. Army Lt. Col. Kelly Montgomery was once interested in joining the Federal Bureau of Investigation. Instead, he ended up in the Army – again.

Montgomery, the new commander of the U.S. Army ROTC program at the University of Virginia, is a product of ROTC himself, which contributes to his insight into the program.

“When I was an undergraduate in ROTC, I thought I knew about leadership,” he said. “After I was commissioned, I realized how much more I had grown, and I promised myself that if I ever had the opportunity to give back and to help shape young cadets, I wanted to be a part of that.”

Montgomery was raised on a farm outside Marion, Illinois, where a federal prison is one of the main employers.

“I didn’t want to work in the prison, or mine coal or be a farmer,” he said. “I needed some adventure in my life.”

In 1994, after a brief period in community college, Montgomery joined the Army and volunteered for the infantry. He served at Fort Myer in Arlington (now Joint Base Myer-Henderson Hall), where he performed many ceremonial duties; Fort Polk in Louisiana; and trained for jungle warfare in Panama.

When he completed his tour, he separated from the Army and married his sweetheart, Julie, who came from Springfield. They returned to southern Illinois, and he enrolled at the Southern Illinois University as an administration of justice major, with minors in history and political science. He was service-oriented and looked to a career in government or law enforcement. He also joined the Illinois National Guard.

“I always wanted to be part of something bigger than me – the idea of selfless service and giving back to society,” he said. “I was thinking in terms of being an agent of the Federal Bureau of Investigation, the Drug Enforcement Administration or some form of law enforcement.”

But when he talked with the FBI recruiter, he found they were looking for people who were lawyers or accountants, or spoke multiple languages, or had been in military intelligence as an officer with a security clearance. To become what the FBI sought, he would have to go back into the Army. So he joined ROTC.

Because of his prior service, during which he rose to the rank of sergeant, his married status and his maturity level relative to his fellow cadets, Montgomery said he had to go through a degree of what he called “expectation management” as an ROTC cadet. He found he was an asset to the program because of his experience with small-unit tatctics and leading a squad. When he was commissioned, he entered into military intelligence, and received training at Fort Huachuca, Arizona. After a short visit home, he flew back to Fort Huachuca – on Sept. 10, 2001.

The next day, he and his wife talked on the telephone as they watched the terrorist attacks on the U.S. unfold on the television. “You’re going to war,” his wife said.

Montgomery did indeed go to war, stationed first in Afghanistan and then in Iraq. He was not happy in his work in Afghanistan as a desk-bound second lieutenant working with the Joint Task Force 180; it did not fit his idea of what he should be doing, and he thought about again leaving the Army when his tour was up. He explored possibilities again with the FBI, but then was reassigned to a post in Iraq near Fallujah, and his outlook changed.

“In Iraq, I was an assistant battalion intelligence officer, with a great sergeant that I learned a lot from, and worked for an awesome battalion commander who took me everywhere he went,” he said. “It was more hands-on; there was more excitement, and when I came home I realized I was enjoying my work and I forgot about the FBI.”

His first introduction to Charlottesville was from 2013 to 2015, when he was assigned to the National Ground Intelligence Center.

“It was my first non-tactical assignment, the first that wasn’t infantry or special operations,” he said. “It was what they call a ‘broadening assignment,’ and I got to see how intelligence supports national decision-makers.”

From there, Montgomery went on to the Special Operations Command Central in Tampa, Florida, where he worked on issues involving the Middle East.

Montgomery and his family are happy to be back in Charlottesville, where they can renew old friendships and return to established routines.

In his approach to his job, Montgomery said he wants to teach the cadets from his experience, but also give them a chance to make their own mistakes.

“I want to test them and let them develop their own leadership style,” he said. “I want to give them the basics in how to do that and let them grow.”

A Year We Will Never Forget: 2019-20 in Review END_OF_DOCUMENT_TOKEN_TO_BE_REPLACED

‘What Will You Carry With You?’ Remarks From UVA President Jim Ryan END_OF_DOCUMENT_TOKEN_TO_BE_REPLACED