U.Va.'s McIntire Amphitheatre Is Getting a New, Old Feature 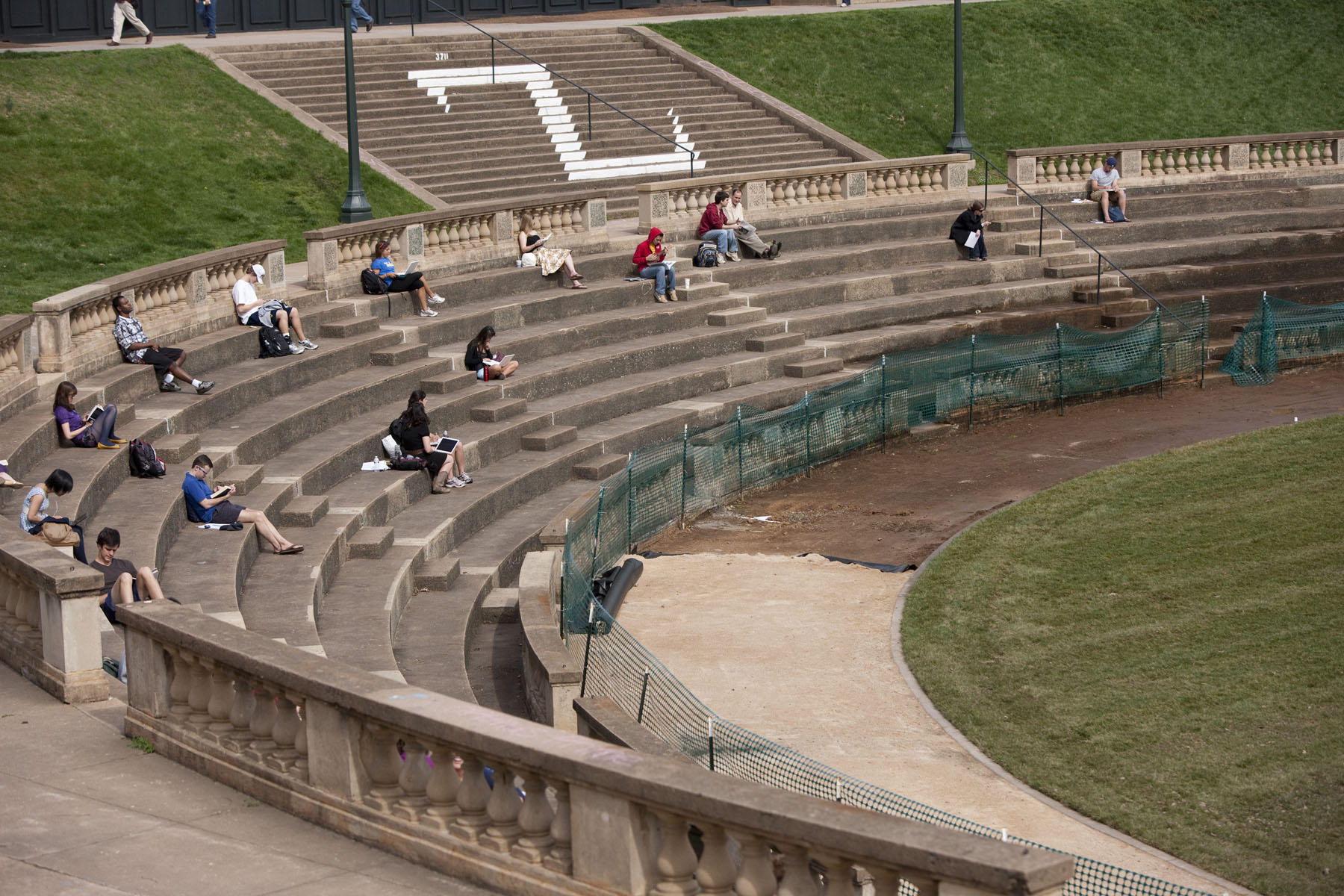 April 6, 2010 — The University of Virginia's McIntire Amphitheatre is looking more like it originally did.

The outdoor performance space, bordered by Cocke, Garrett, Minor and Bryan halls, is an arc of concrete seats facing a 60-plus-foot stage, with a semi-circle of grass in between. The amphitheatre seats about 1,500 people.

The original design called for a 10-foot-wide gravel walkway on the inside arc, separating the seats from the grass. This is being restored, along with a concrete curb that separated the walkway from the grass, according to Mary Hughes, landscape architect for the University. Paths had been worn in the grass, but new sod has been installed. The work should be completed by the end of April.

"We want to reclaim the area visually," Hughes said. "It is used as an outdoor gathering space and it is visible from many academic buildings."

While the concrete seats have received a lot of "wear and tear," Hughes said, the amphitheatre itself is not in bad shape.

"Aesthetically, there is not a lot wrong with it, but the historic features, the path and the concrete edge, were lost over the years," she said.

While the front of the amphitheatre is being restored, extensive work is being done behind the open-air stage structure, which is currently used for storage and an office for the Facilities Management crews who work on the Academical Village.

A 10,000-gallon underground cistern was installed between the storage building and Bryan Hall to capture rainwater and spring water that can be used for landscaping around Grounds. Porous paving stones are being put down in the driveway above the tank to facilitate water seepage into the cistern.

"That gives us water in Central Grounds," said Rich Hopkins, landscape supervisor for Facilities Management. "We have had to truck in water. This would give the historic area gardeners easier access."

Gardeners have used small, all-terrain vehicles to haul water in tanks from the trucks to the gardens and other plantings they are tending. They will now be able to fill their portable tanks from the cistern.

Designed by Fiske Kimball, architect, architectural historian and dean of the Architecture School, the amphitheatre was built in 1921, a gift from Paul Goodloe McIntire, who endowed the McIntire School of Commerce and McIntire Departments of Art and Music. A Charlottesville native, McIntire donated parks and statues to the city of Charlottesville.

"He paid for an organ in the building behind the stage and there were concerts that were open to all the people in the community," Hughes said.

The amphitheatre is still used frequently for outdoor events.

"I would say it is booked about three times a week," said Elizabeth Carey, the event-planning manager at Newcomb Hall.

She said students hold fundraising events, performances and festivals. It is used for ROTC drills and for alumni gatherings and graduation ceremonies.

"I think performances are the number one use of it," Carey said.

The amphitheater was first used for the 1921 Commencement, marking the centennial of the University, a celebration postponed from 1919 to 1921 because of World War I. University alumnus and U.S. President Woodrow Wilson attended the ceremony. Commencement exercises were held there from the 1920s through the 1940s, and it has also been the home to many cultural events and performances.

While it has been a central gathering place on Grounds for many years, the amphitheatre has not always been so well tended. It was threatened with demolition in the 1960s, and then the grassy portion was converted into a paved parking lot in the 1970s. It was returned to a performance area later in that decade.

Meet the New Cavalier on Horseback: She’s Eager To ‘Carry On a Legacy’ END_OF_DOCUMENT_TOKEN_TO_BE_REPLACED

Monkeypox Is Spreading, But University’s Risk Believed To Be Low END_OF_DOCUMENT_TOKEN_TO_BE_REPLACED

Virginia Football – For All Virginia END_OF_DOCUMENT_TOKEN_TO_BE_REPLACED