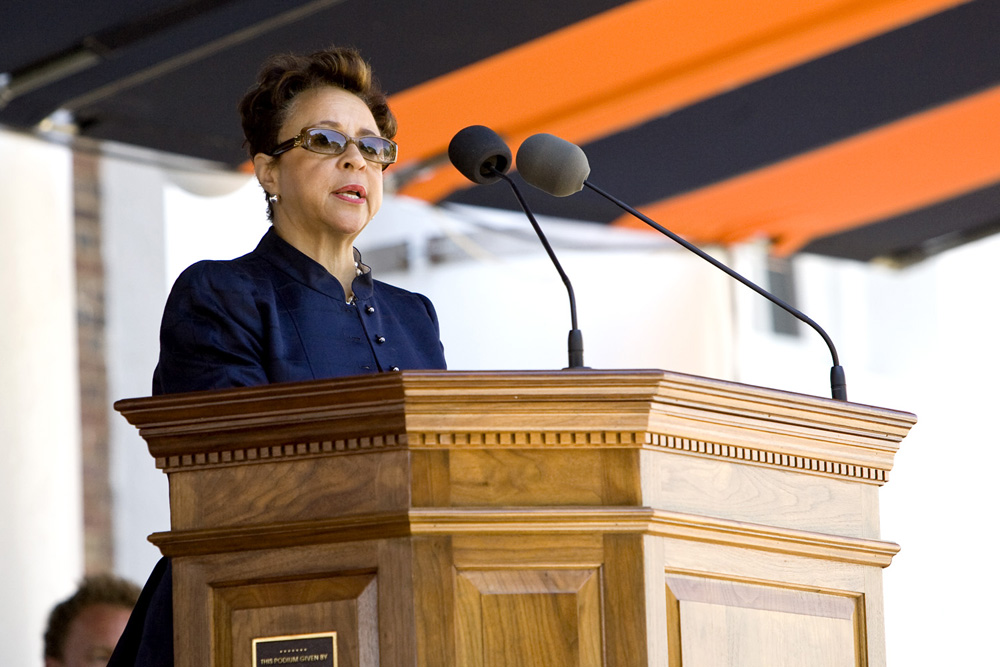 May 17, 2008 -- Sheila C. Johnson, a successful entrepreneur who co-founded Black Entertainment Television and owns stakes in three Washington professional sports teams, told members of the University of Virginia's Class of 2008 that the challenges of today's global, ultracompetitive economy are similar to the challenges of World Wars I and II for previous generations.

Presenting the annual Valedictory Address, Johnson warned that personal prosperity and America's very survival are at stake but asserted that the graduating generation is better prepared than any before to meet these challenges.

Johnson's address under a crystal blue sky to the graduating class, their families and friends on U.Va.’s historic Lawn capped the Valedictory Exercises, which featured several major awards and kicked off the University of Virginia's Finals Weekend.

In her speech, Johnson said that today's American college graduates are up against a world filled with young people who are well-educated, driven and mentally disciplined. Quoting from Thomas Friedman's book, "The World is Flat," she warned that these young people from China, India and other countries don't want to emulate or work for Americans, but rather want "to dominate us" and to start great multinational corporations whose power may eventually dwarf that of many nations.

For Virginia graduates faced with this new global competition "to achieve financial success will be harder, the stakes higher, than at any time since the settlers first set foot on this land."

Johnson, who is CEO of Salamander Hospitality, LLC, and a global ambassador for CARE, touted the importance of American entrepreneurial spirit. "We became a world power by graduating young men and women whose goal in life was to have thousands of people working for them," she said.

More broadly, she emphasized the importance of demanding more from oneself and others. As an example, she reflected on U.S. Sen. Barack Obama's recent speech on race in America, which, she said, "ranks as one of the seminal moments in the history of American oratory." Unlike so many politicians who have dumbed down issues or appealed to people's fear or resentment, in Obama's speech "what we heard for the first time ever in the course of national politics was someone willing to put into words our anxiety over a dark and murky part of our past." Defying over a century of conventional political wisdom, "he took a complicated issue — arguably the most inflammatory and divisive one in the history of our country — and called it for it was — complicated."

Obama's speech, she said, challenged Americans to "get over our racial differences." It was "a noble discourse, based in reason and logic, that demanded something more of those of us that heard it." Similarly, Virginia graduates should demand more of politicians, the media and themselves. "You have to decide what kind of country you want to live in and what kind of world you want to inhabit, and you have to go out and build it," Johnson said. "The stakes are higher than they've ever been before."

After observing that the graduates are part of a generation better prepared than any previous generation to face the challenges of the globalized world, Johnson ended with a final exhortation: "Don't ever lose sight of, or take for granted, the greatness that lies within you."

Nine awards were presented during the exercises, including a new one—the Gordon F. Rainey, Jr. Award for Vigilance to the Student Experience, created by the Society of the Purple Shadows, one of U.Va.'s secret societies. The award was named in honor of Rainey, a former rector who just completed eight years of service on the Board of Visitors. The inaugural award was given to Patricia Lampkin, vice president for student affairs, in recognition of her years of work to "foster devotion to principles of honor, collegiality, humility and inquisitiveness."

Continuing a Valediction tradition begun in 1997, the Class of 2008 presented its class gift of $174,650 to President John T. Casteen III. Each student can direct his or her gift toward a specific use, and Casteen reported that more than 170 different programs benefited this year from the generosity of 56 percent of the class.

The other awards given during Valediction were:

• Class Award for The Road Less Traveled was presented to Michael Steven Esbach.