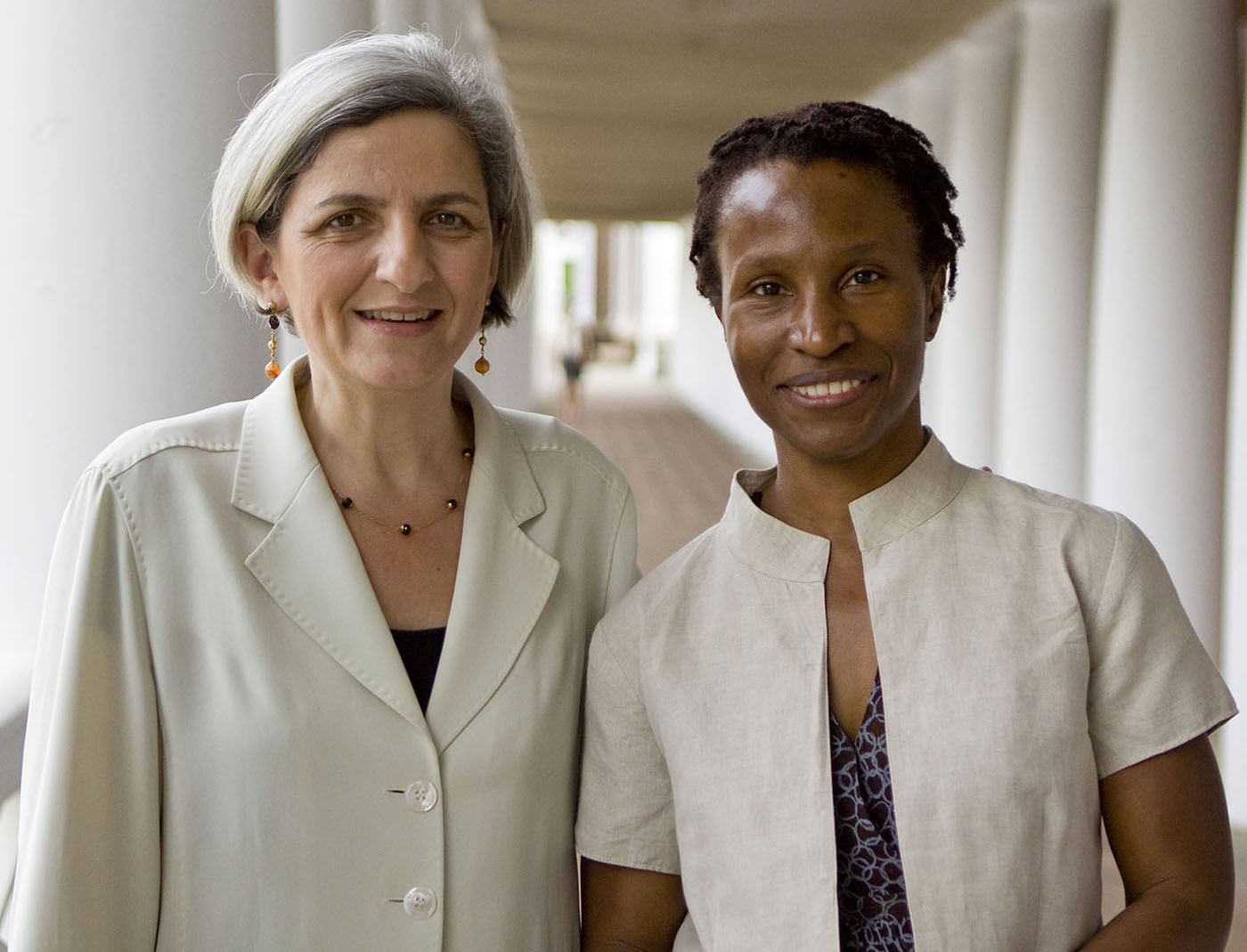 May 4, 2010 — The Carter G. Woodson Institute for African-American & African Studies at the University of Virginia hosted two visiting professors this semester who are well-known in the study of African-American literature and related topics.

Joy James holds an endowed professorship at Williams College and has been the Talbot Visiting Professor this semester. Giulia Fabi came to U.Va. in April, visited classes and participated in activities at the Woodson Institute.

When Joy James was a passionate reader and babysitter in her early teens, she would often leave a book on purpose for the housewife whose children she had cared for – a book on feminism, something by Betty Friedan or Gloria Steinem. She said she never received any thank-yous, but wasn't deterred.

It was a hint of  the serious scholar she would become, focusing on African-American literature and issues of race, gender, politics and incarceration.

James said she noticed that the writings of middle-class white feminists didn't quite fit with her family experience. Things were harder for a black mother raising her daughter alone after getting divorced, and it set James on a path to make sense of her world, she said.

Currently the John B. and John T. McCoy Presidential Professor of Humanities and College Professor in Political Science at Williams, James said she had no black instructors in her higher education. When she attended Fordham University for graduate work, she said New York City was like a bookstore of "real life" for her. There she heard Steinem speak in person and Toni Morrison give a eulogy for James Baldwin.

Through the Woodson Institute, James taught two courses, Prosecuting Race and Rape and Black Feminist Theory. She had the students read and discuss a range of books and court cases, including Ida B. Wells' "Southern Horrors," about lynching, and the writings of political activist Angela Davis.

"While Joy James' contributions to literary and cultural studies have been diverse, her work in the broader field of 'prison studies' has been especially influential," said Deborah McDowell, director of the Woodson Institute. "In numerous publications – books, articles in both refereed journals and edited collections – she, along with Angela Davis and many others, has brought the problem of mass incarceration to the forefront of contemporary public discourse and academic scholarship."

During a post-doctoral fellowship at the University of California-Santa Cruz, James worked closely with Davis, who was on the faculty there, and edited the "Angela Y. Davis Reader," which is widely used in college courses.

She recently gave a lecture about her current research, "Prosecuting Rape and Race: The Case of Ben LaGuer in the Election of Massachusetts' First Black Governor." LaGuer has been in prison since 1983 for raping a white woman. James said she's doesn't question the victim's assault, but the facts of the case don't convince her of his guilt.

James said she has enjoyed her time at U.Va., has found colleagues gracious and students inquisitive and passionate.

"I appreciate the diversity and rigor of this place," she said.

James chaired the African American/Africana Studies program at Williams College from 2005 to 2007. She has been a visiting professor at other universities, including the University of Texas-Austin, Brown and Columbia universities. She earned her M.A. and Ph.D. from Fordham University, the latter degree in political philosophy. She also has a master's from Union Theological Seminary.

Giulia Fabi grew up in a household of readers in the northeastern Italy town of Ferrara. She and her brothers were fascinated with American culture of the late 1960s and '70s, she said.

Her mother exposed them to African-American literature and one day brought home a book of Langston Hughes' poetry. Fabi loved his beautiful poems, she said.

She turned her interest in African-American literature into the focus of her career. Now an associate professor at the University of Ferrara, she earned her Ph.D. from the University of California-Berkeley, where she received an Outstanding Graduate Student Instructor Teaching Award in 1990-91.

"Now my family knows all about African-American literature," she said with a laugh.

In order to teach some of the African-American literature she wanted to, she found she had to translate some of the works, especially early writings.

A review of "Passing and the Rise of the African American Novel," which was named a Choice Outstanding Academic Book in 2003, said the critical work "restores to its rightful place a body of American literature that has long been overlooked, dismissed or misjudged. This insightful reconsideration of 19th-century African American fiction uncovers the literary artistry and ideological complexity of a body of work that laid the foundation for the Harlem Renaissance and changed the course of American letters."

Fabi and McDowell met at a conference in Europe and kept in touch. Fabi used McDowell's literary criticism in her courses and even planned a series of lectures that McDowell gave in several Italian universities.

"Deborah McDowell is well-known internationally and has a major following in Europe," Fabi said.

At U.Va., she taught in McDowell's graduate seminar on the Harlem Renaissance. It has been interesting to note the difference between Italian and American students, Fabi said.

"Here the students have a basic knowledge of American culture not familiar to European students," she said. "American students understand the context and can make comparisons to contemporary events and other American writers. It's really real for them, not just academic study."

In contrast, European students notice different aspects and are more apt to compare the African-American literature to other European writers, she said.

Her Italian students "go crazy for this literature," she added.

Having taught at the University of Wisconsin, as well as at Berkeley, Fabi said she feels "the weight of history here in Virginia."

Besides enjoying her time at the Woodson Institute, Fabi said the University library is "wonderful" and has been helpful for her research.

"African-American utopian writers were reading, revising and responding to each other, as well as to mainstream authors," she wrote in describing the project. Their fiction can be seen "as a means of intervention in the life of the nation that was attempting to exclude them through segregation." She intends to show how their novels contributed to articulating the civil rights agenda to come.

Netflix to Add Ads. Why This Could Be a ‘Game-Changer’ for Your Viewing Experience END_OF_DOCUMENT_TOKEN_TO_BE_REPLACED

What’s Next for UVA’s Class of 2022? END_OF_DOCUMENT_TOKEN_TO_BE_REPLACED