What Do Cyber Civil Rights, a Tuxedo Cat and Skittles Have in Common? These Mismatched Items Distinguish Danielle Citron as a Law Professor, Mentor and Friend 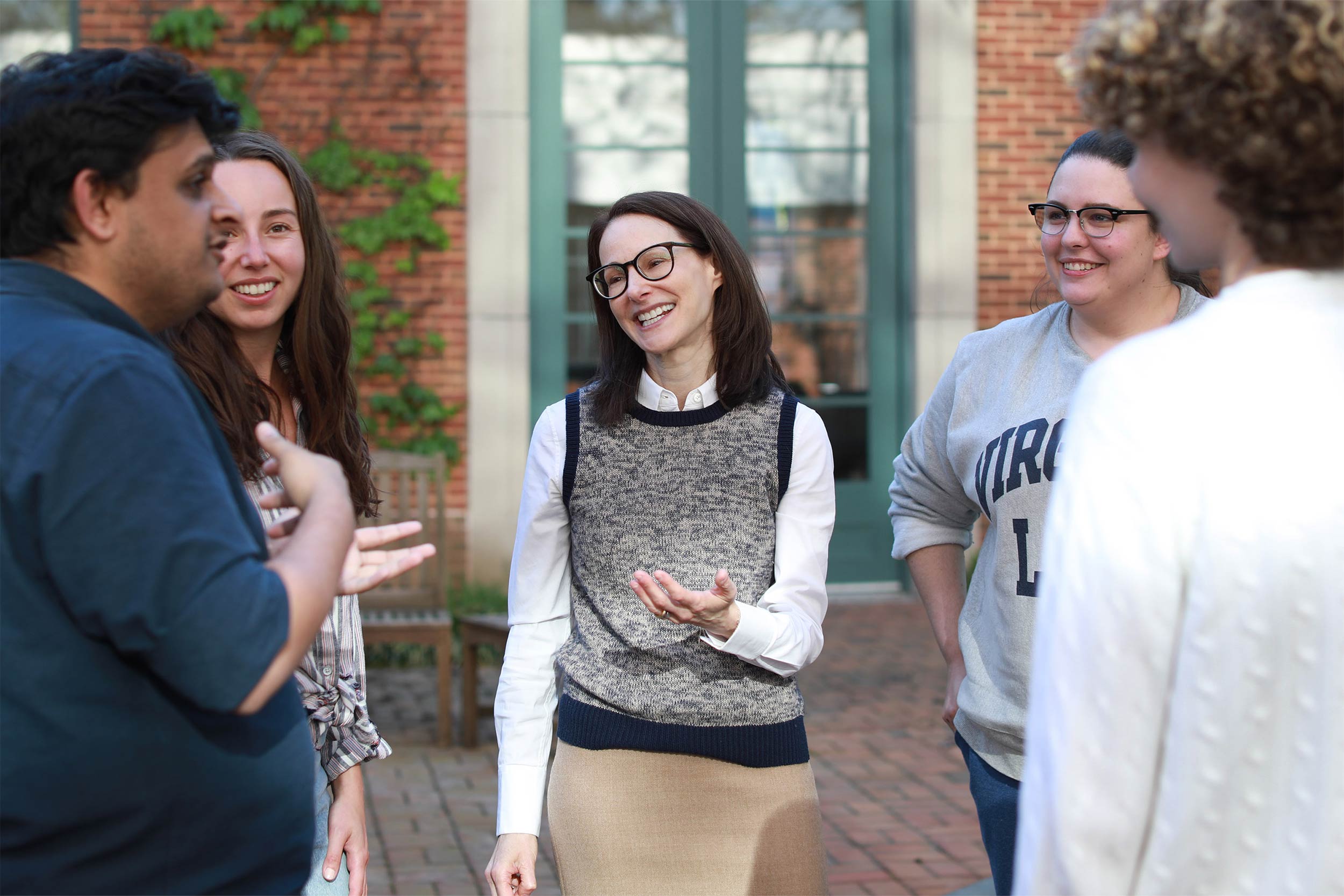 Danielle Citron is a MacArthur Fellowship recipient and the Jefferson Scholars Foundation Schenck Distinguished Professor in Law and Caddell and Chapman Professor of Law. (Photo by Julia Davis, UVA School of Law)

Editor’s note: UVA Today’s new Faculty Spotlight series shines a light on some of the University’s many outstanding faculty members.

Danielle Citron is a global powerhouse in the cyber abuse arena. Given a 2019 MacArthur Fellowship, also known as a “Genius Grant,” the University of Virginia law professor has explored new, groundbreaking territory in the legal field, highlighting and combating the scourge of online abuse, most of it impacting women and minorities.

In June 2019, she testified before Congress about the national security and privacy risks of deepfakes. She is an adviser to the dating app Bumble, the music streaming service Spotify, and video sharing platform TikTok. Citron also was a member of Twitter’s Trust and Safety Council before CEO Elon Musk dissolved it in December.

Luckily for the University, Citron joined the faculty at the School of Law at the end of 2020, cancelling planned visits to Harvard University and the University of Chicago.

All along, Citron said her heart lay with UVA. She’d been in discussions to come for years after a long stint at the University of Maryland and then a short-lived one at Boston University as the pandemic hit.

“My ideal was to be at UVA because there’s so many colleagues that I admire here,” she said. She’d have come sooner, she said, but her husband’s work and travel required that the family live near a major airport. COVID changed all that as more and more people, including her husband, worked from home. 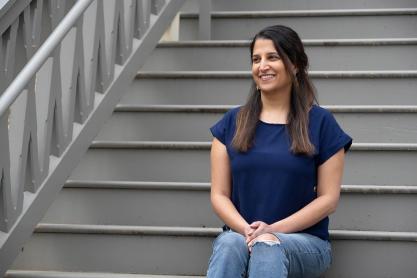 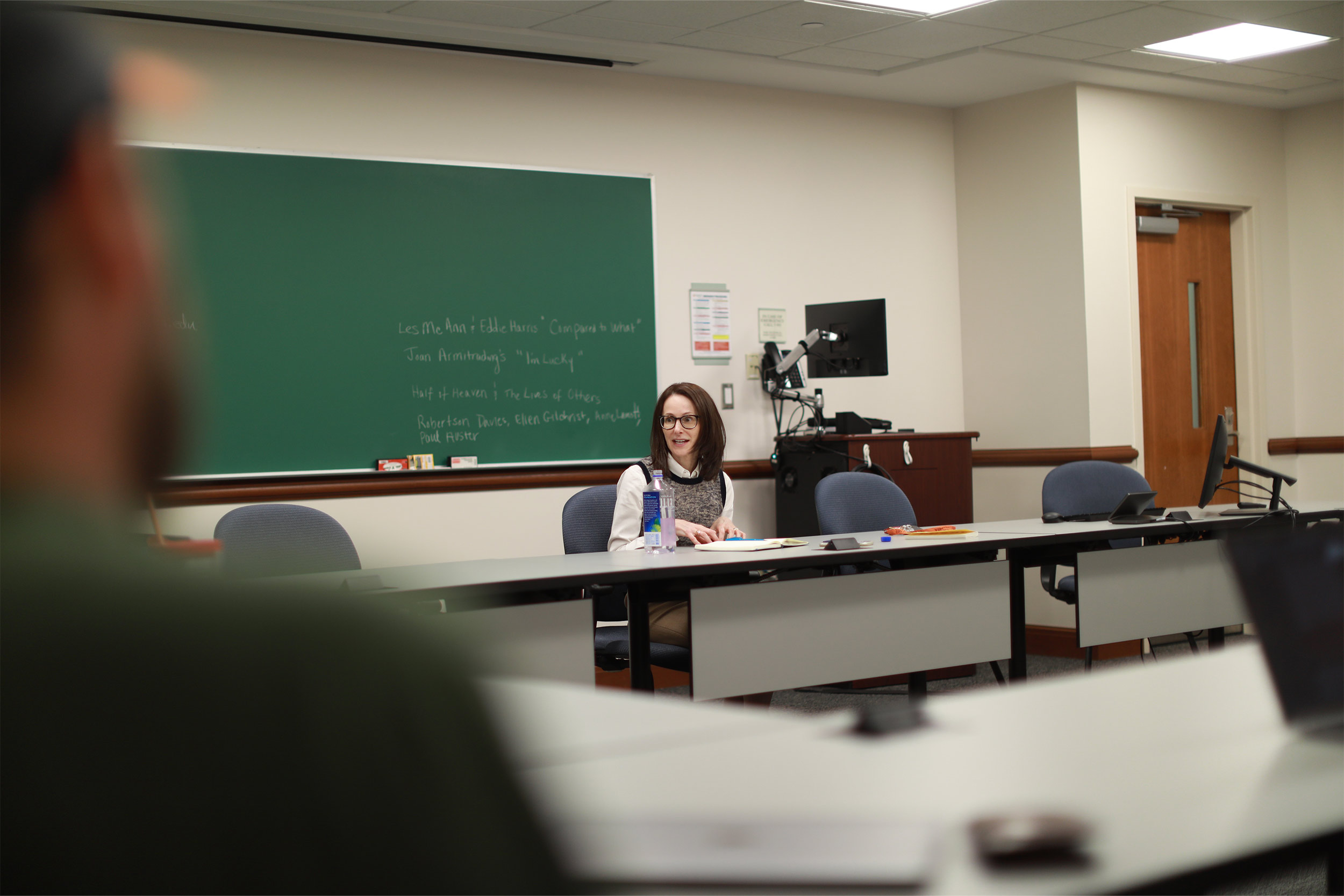 Citron’s courses include Privacy and Civil Rights and Civil Liberties in the Information Age. (Photo by Julia Davis, UVA School of Law)

That’s when UVA School of Law Dean Risa Goluboff floated an idea: Rather than continue with a planned sabbatical in Boston to write her new book, why not come to UVA sooner and write it as the new Jefferson Scholars Foundation Schenck Distinguished Professor in Law and Caddell and Chapman Professor of Law?

The appeal only grew as Citron, still in Boston, wrote the first draft of her lauded new book, “The Fight for Privacy: Protecting Dignity, Identity and Love in the Digital Age,” with the benefit of UVA Law librarians and research assistants.

So even from afar, Citron began impacting UVA students and drawing them into her admired work in a very real way.

A Special Bond With Students

“When I first met her, I felt really fortunate and lucky that she and I arrived at UVA just a semester apart from each other, because she really has this enormous reputation at the school,” Laura Faas, a third-year law student, said. “And I can’t say if I had come to UVA even a year later whether or not I would have been too intimidated to reach out to her because of her accomplishments.” 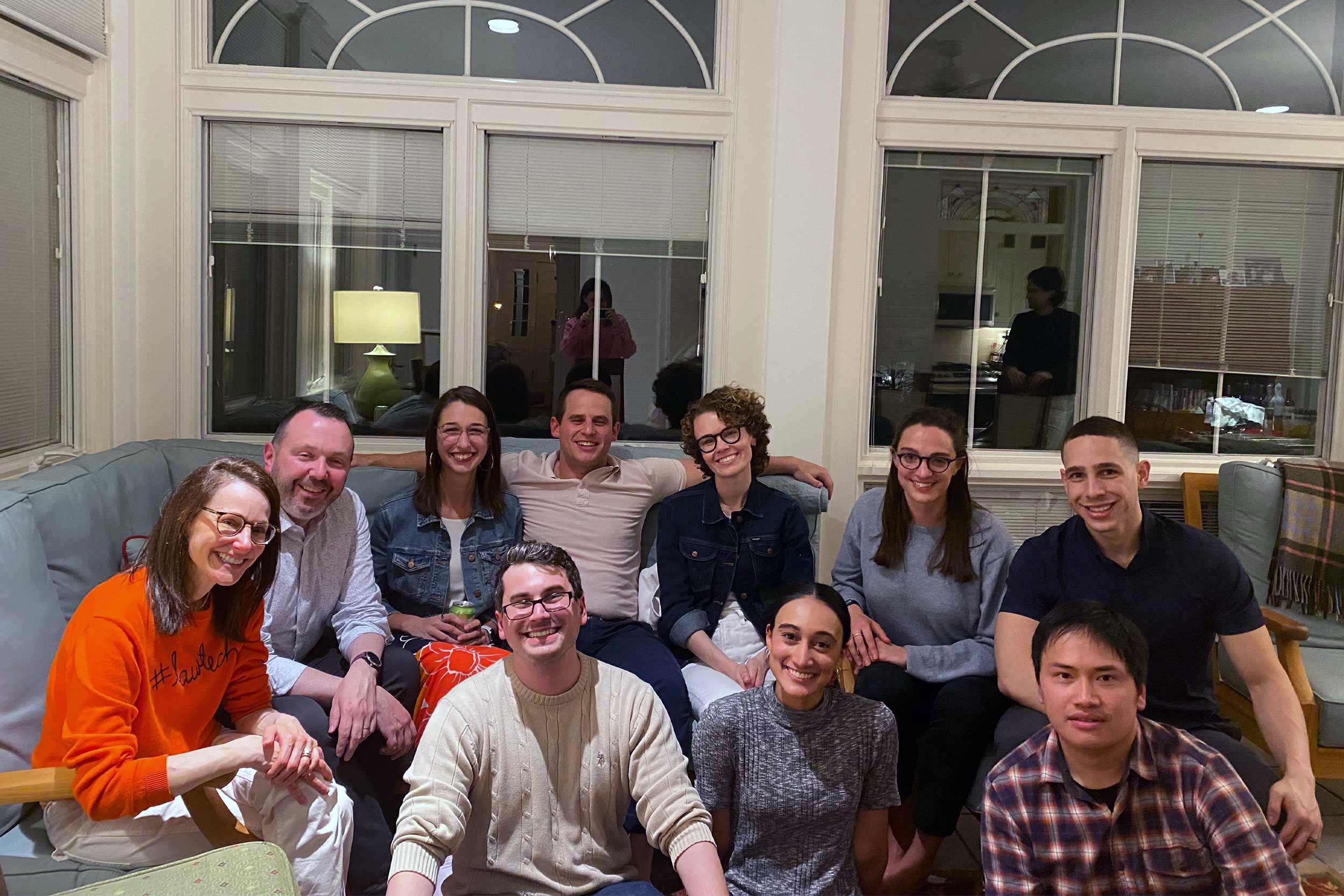 Citron’s courses include Privacy and Civil Rights and Civil Liberties in the Information Age. (Contributed photo)

Faas sent an email to Citron introducing herself, sharing her résumé and saying she’d love to work for the professor.

“A few minutes later I received an email back saying that I was hired,” Faas said. “I worked on her book, and that was a wonderful opportunity. I had no idea that that’s what I was going to be able to work on.”

Citron said as she was writing the book, when issues needing research came up, she would reach out to assistants, including Faas, to find answers.

“I would share chapters with them and say, ‘Read it. Tell me what you think. I want it to be readable for everybody,’” Citron said.

Citron’s family are big UVA sports boosters. She and her husband Louis attended a men’s basketball game in November.

And readable it is. As a Kirkus review says, “She surveys some of the most invasive and egregious examples of privacy violations that have become common in the last decade or so, ranging from secret video recording, hacking of personal digital devices, ‘sextortion’ schemes, cyberstalking, cyberflashing, deepfakes, nonconsensual pornography, and various modes of digital surveillance and data collection.”

In the acknowledgments section of her book, Citron thanks Faas by name.

When you talk with Citron, it does not take long to realize that her family is everything to her. In fact, she dedicated her newest book to them. When the family was weathering the pandemic, they all stayed under one roof in Boston.

“We don’t want to be apart. We’re like very dorky and love each other,” Citron said. In fact, her daughters, Ellie and JJ, are now first- and second-year law students at UVA.

So, it’s not surprising that she opens her home to her students regularly, hosting dinner parties featuring kebabs and Citron’s beloved and apparently very outgoing tuxedo cat. If you talk to a student about dinner at the Citron house, this cat is going to be part of the conversation. 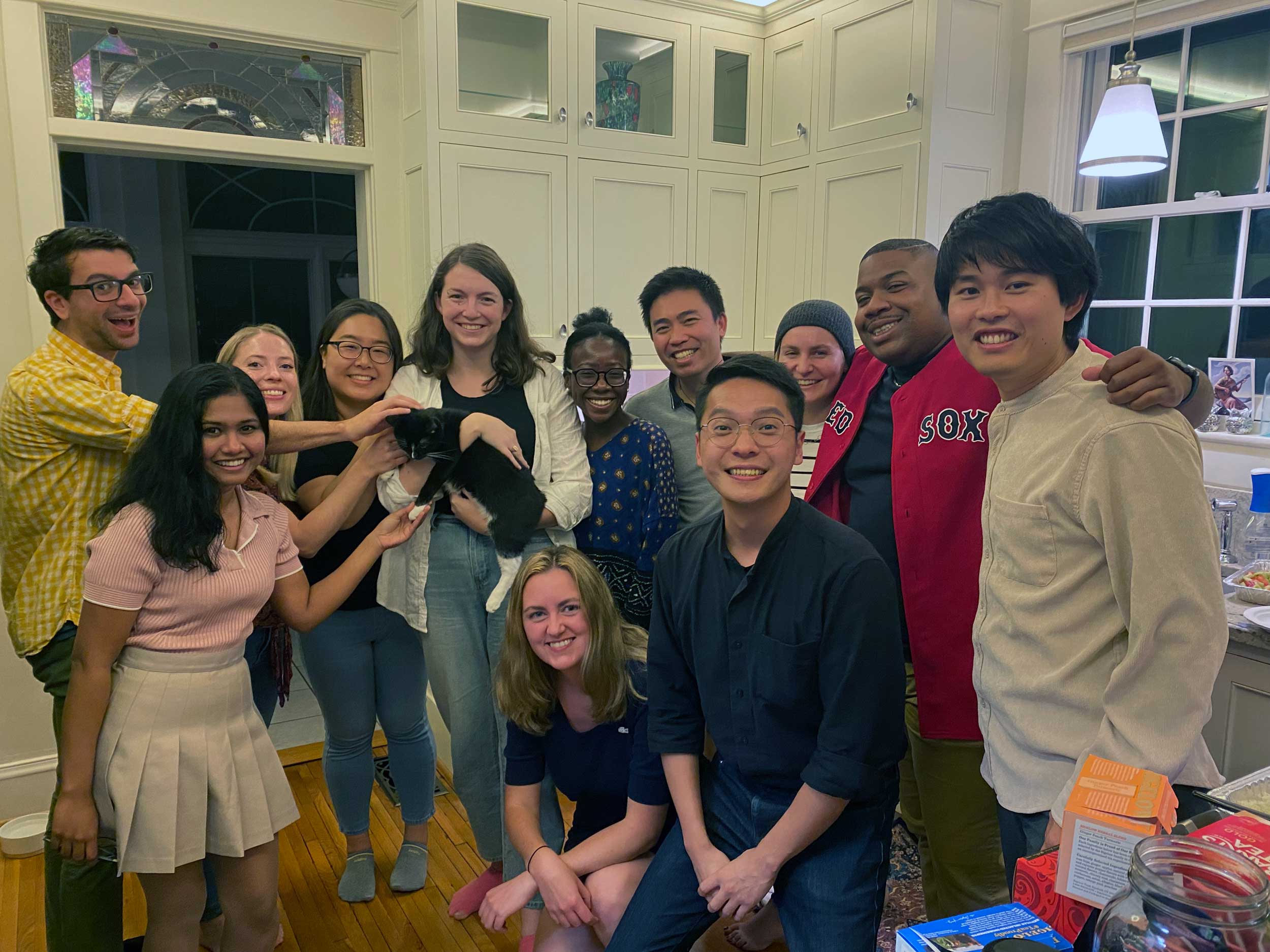 Patsy the cat is the center of attention in Citron’s cozy kitchen on a recent fall night. (Contributed photo)

The story of how the kitty with the snow-white paws came to live with the family is just as heartwarming. “Her name is Patsy and this is why my faculty is amazing,” Citron said as she began to tell the story.

“Charles Barzun is on my faculty and his amazing family fostered a mama cat and kittens. Patsy was on the side of the road and was going to die and the SPCA brought her to this mother cat at Charles’ house and the mother cat took her in,” she said. Citron’s family adopted Patsy a few months later. “She’s the cutest. So, it’s thanks to my colleague Charles Barzun and his amazing family that we have a kitten who we all love,” Citron said.

Now it’s time to talk about Skittles. And these are no ordinary Skittles. These are the hard-to-find Brightside Skittles, a rarified flavor blend of tangerine, paradise punch, watermelon, pink lemonade and banana kiwi.

“When I met her, I didn’t know who she was, like I hadn’t Googled her or anything,” said Tolu Ojuola, a second-year law student. 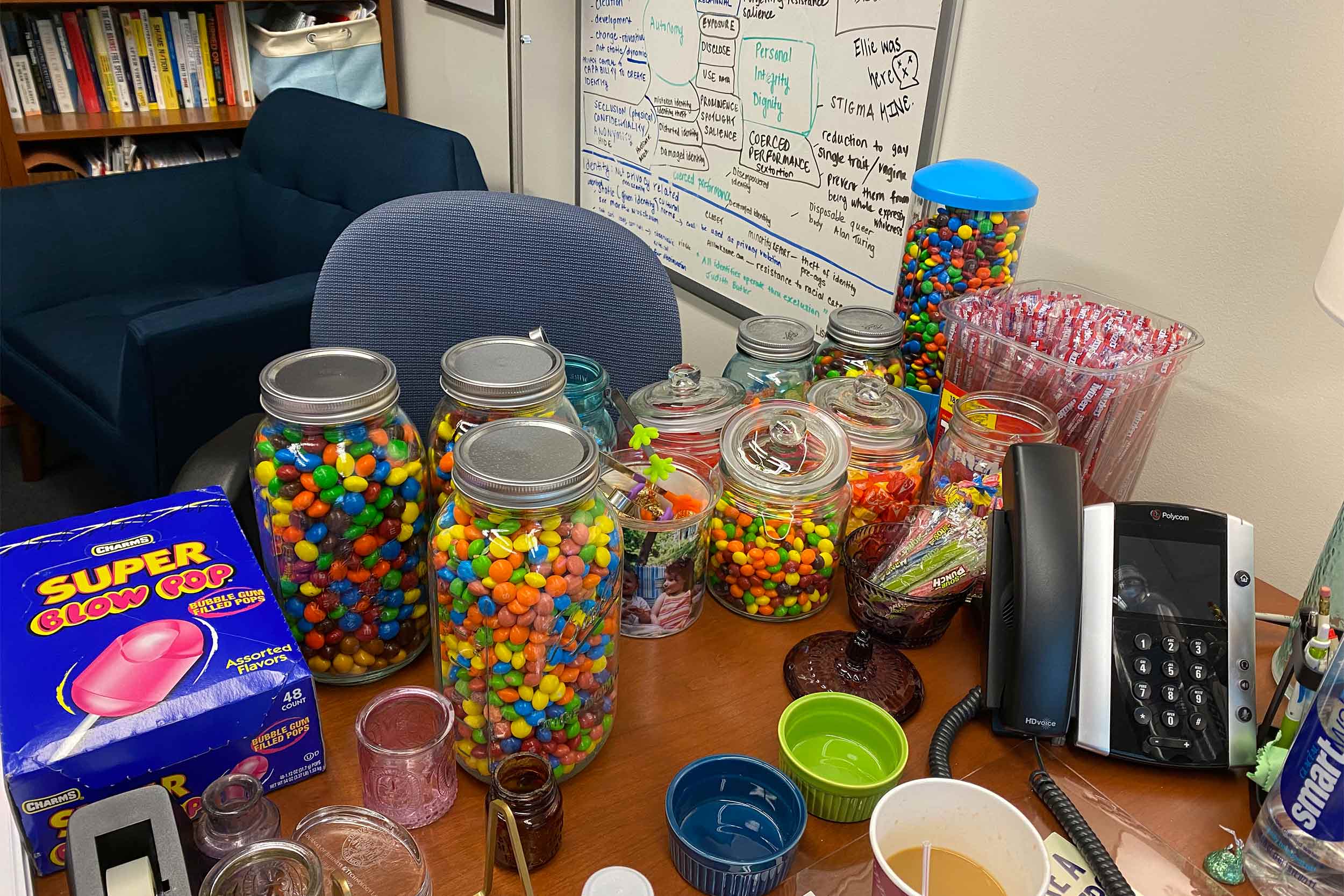 Citron keeps a stash of candy in her office for colleagues and students. It’s a tradition she started at the University of Maryland’s School of Law. (Contributed photo)

“And after the first time we met, she asked me what my favorite candy was and the next time we saw each other, she bought it and it was in her office,” Ojuola said.

“I went to her office and she had bags in her drawer of Brightside Skittles. And she was like, ‘You can just come by any time. These are for you,’” Ojuola said, laughing.

It’s those personal and thoughtful touches Ojuola said endeared Citron to her.

“You know, like, where did you find the time to, first of all, remember that information, go to the store, bring it back to your office … She’s got this huge label and this title as a genius, and she most certainly is a genius. But she doesn’t wield that against anyone. If anything, she uses it to pull more people in and to pull more people up.”

We returned to Citron’s research assistant, Laura Faas, with a final question: Beyond law, what have you learned from Danielle that you are going to take with you for the rest of your life?

Her answer was to have self-confidence.

“I had a difficult first semester of law school and we talked about that,” Faas said. “In our first Zoom call, I think, one of the things she told me was that she wants me to have the confidence in myself that she has in me.

“For someone of that caliber to have that faith in me and that confidence in me, and I think to consider me a friend, is really impactful – and in the best way,” Faas said. “I can’t really articulate how grateful I am for that.”