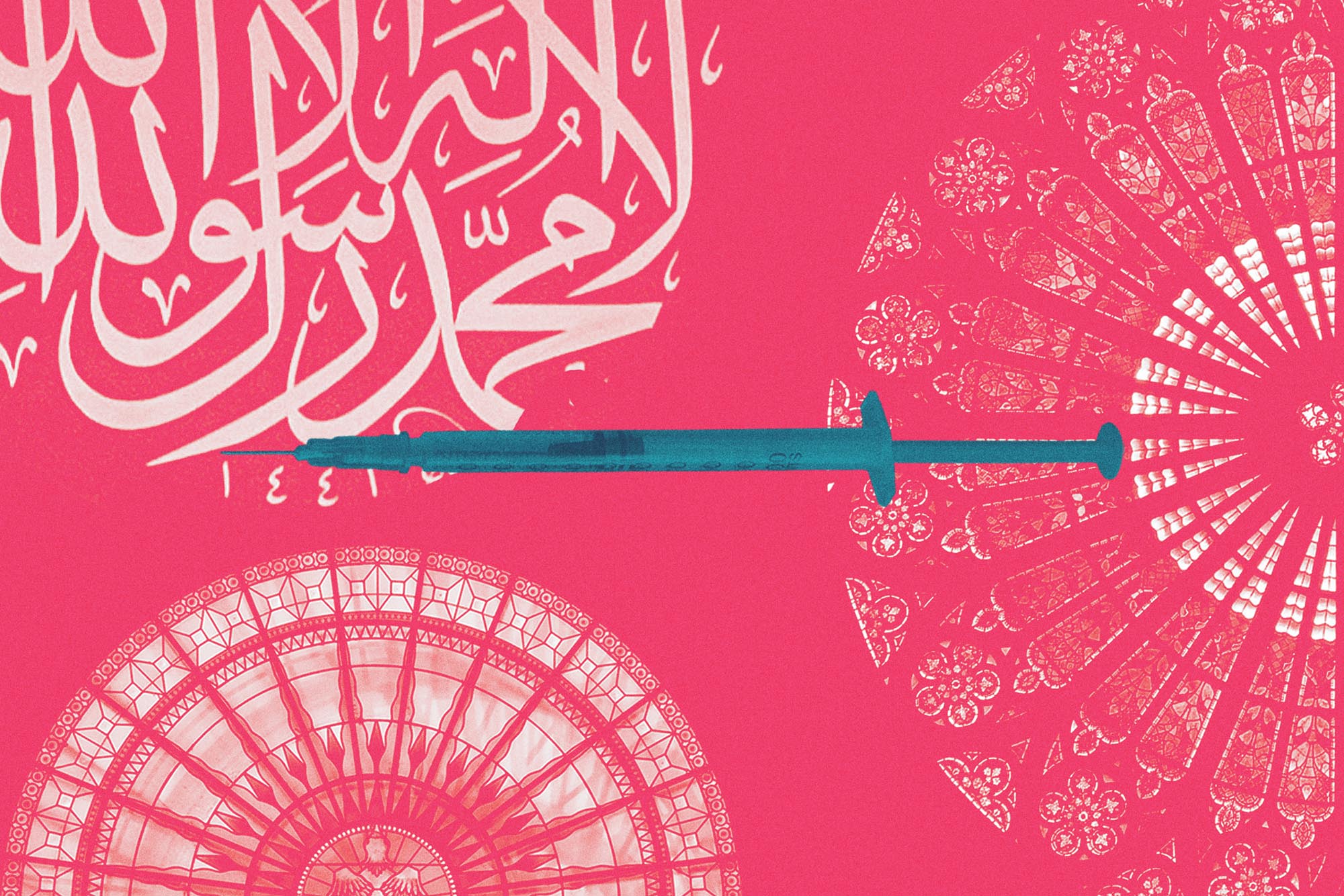 Many U.S. schools, businesses and governments requiring COVID-19 vaccination have offered religious exemptions. But what are they, exactly, and is the government even required to offer the exemptions in the first place?

University of Virginia School of Law professor Douglas Laycock examined the issue in a piece for The Conversation, re-posted below. Laycock is perhaps the nation’s leading authority on the law of religious liberty and has testified frequently before Congress and has argued many cases in the courts, including the U.S. Supreme Court.

Here’s what he had to say in The Conversation.

or Americans wary of COVID-19 vaccine mandates, like the sweeping requirements President Joe Biden announced Sept. 9, 2021, it seems there are plenty of leaders offering ways to get exemptions – especially religious ones.

No major organized religious group has officially discouraged the vaccine, and many, like the Catholic Church, have explicitly encouraged them. Yet pastors from New York to California have offered letters to help their parishioners – or sometimes anyone who asks – avoid the shots.

These developments point to deep confusion over how to win a religious exemption. So what are they, and is the government even required to offer the exemptions in the first place?

Many schools, businesses and governments requiring vaccination have offered religious exemptions. Some are loath to challenge people’s claims that getting the shot goes against their beliefs for fear of being sued, but organizations have come up with a variety of ways to assess claimants’ sincerity.

But the legal basis of Americans’ supposed right to a religious exemption to vaccination is less clear than such policies’ popularity would suggest.

As a lawyer and scholar who focuses on religious liberties, I have supported religious exemptions for a baker who refused to create a cake for a same-sex wedding, a family-owned business that refused to provide emergency contraception to its employees, a Muslim prisoner who was obligated to grow a beard and many others.

Even so, I believe that under the general law of religious liberty – including the Constitution and state and federal religious freedom laws – the government has an easy case to refuse religious exemptions from vaccines against infectious disease.

There are a variety of ways to present a religious liberty claim, each with a different set of rules.

The most stringent standard is that the government should not require people to violate their conscience without a compelling reason.

The Supreme Court has never been clear about the full range of what counts as “compelling,” but some cases are clear. The government has a compelling interest in preventing significant threats to other people’s health, and especially so in a pandemic. The unvaccinated endanger people who are immunosuppressed or cannot be vaccinated because of their age or any other medical reason. The unvaccinated also endanger people who are vaccinated because no vaccination is 100% effective, as is evident from the number of breakthrough COVID-19 infections in the U.S.

Until last month, no state or federal court had ever granted a religious exemption when the government had to demonstrate compelling interest in requiring a vaccine. Now, a federal judge has granted a temporary restraining order to prevent Western Michigan University, a public school, from requiring its student-athletes to be vaccinated. This is a preliminary opinion and seems unlikely to stand up through further proceedings and appeal, since every judge to encounter such an issue in the past has ruled the other way.

The Supreme Court’s current interpretation of the Constitution does not always require a compelling interest.

Under the current law of the Constitution, people have no right to a religious exemption from a rule unless there is also a secular exception or gap in coverage that would undermine the government’s interests just as much. If there isn’t such a secular exception, the government doesn’t have to show any reason at all to refuse religious exemptions.

Usually the only secular exception to vaccine requirements is for “medical contraindications,” meaning that a vaccine would harm the recipient – for example, if someone is allergic to an ingredient in the vaccine.

In some states, however, the situation is more complicated. Most states explicitly authorize religious exemptions to vaccination, and sometimes philosophical exemptions as well – regardless of the government’s compelling interests.

Those state laws could not protect anyone from a federal vaccine mandate, and many of them only apply to certain groups – usually schoolchildren. But they could protect people from mandates from their state or local government.

Many private employers requiring vaccines offer religious exemptions, too. Title VII of the Civil Rights Act requires businesses to accommodate workers’ religious practice as long as they do not cause “undue hardship” to the employer. But the Supreme Court has interpreted “undue hardship” to mean anything more than a minimal expense, meaning employers don’t need a reason anywhere near as strong as a compelling interest. So employers do not have to allow religious exemptions to their employees.

Still, many employers and governments alike have been reluctant to challenge religious exemption claims. When it comes to vaccines against childhood diseases, where the danger did not seem great or immediate, many groups have just taken people’s word for it if they say their religious views prevent vaccination.

There is evidence that many claims of religious objections to vaccination are false, particularly given the large anti-vaccine movement in the U.S.

Dorit Rubinstein Reiss, a law professor at the University of California, Hastings, has compiled anecdotal and survey evidence that most claims for refusing school vaccination requirements on religious grounds are false. The objectors really do object to vaccination, but their reasons are not religious. Meanwhile, opposing COVID-19 vaccinations has become a matter of political identity for many on the political right.

These factors could mean a flood of false religious claims. And whenever that situation arises under the federal law of religious exemptions, the Supreme Court has refused them.

The court rarely talks about this explicitly, but there is a compelling interest in not having a general policy’s effectiveness undermined by thousands or millions of claimed religious objections. That’s part of the reason why the court has refused constitutional protection for religious objections to paying taxes, or serving in the military, or, back in the desegregation era, integrating restaurants.

It is very hard for judges to determine religious sincerity, and mostly they don’t try. But when there are likely to be many exemption claims – both true and false – courts reject them because the difficult task of judging the sincerity of one or a few claimants becomes impossible when there are thousands or millions.

Still, some claims are probably sincere. One question to ask people claiming religious objections to the COVID-19 vaccines – whether on cross-examination in a courtroom or arguing at a meeting of your local school board – is whether they or their children are vaccinated against other diseases. Even if the answer is “no,” however, that may point to longstanding anti-vaccination views rather than sincere religious objections.

Some Catholics object to COVID-19 vaccinations because decades-old fetal cell lines were used in the vaccine research. If that is their sincere religious belief, it doesn’t matter that Pope Francis disagrees.

Still, even when religious objections are sincere, the government has a compelling interest in overriding them and insisting that everyone be vaccinated. And that overrides any claim under state or federal constitutions or religious liberty legislation. It is irrelevant to state statutes that explicitly grant vaccine exemptions with no exceptions for compelling government interests. But federal vaccination requirements override those state laws.

With mandates – and vocal objections – looking poised to grow, the United States could see vaccination requirements more and more put to the test in court this fall. But how far can challenges go? Unless governments mandating vaccines do not defend their rules, or the Supreme Court changes the law, the answer is likely, “Not far.”

What Is the ‘4th Side’? END_OF_DOCUMENT_TOKEN_TO_BE_REPLACED