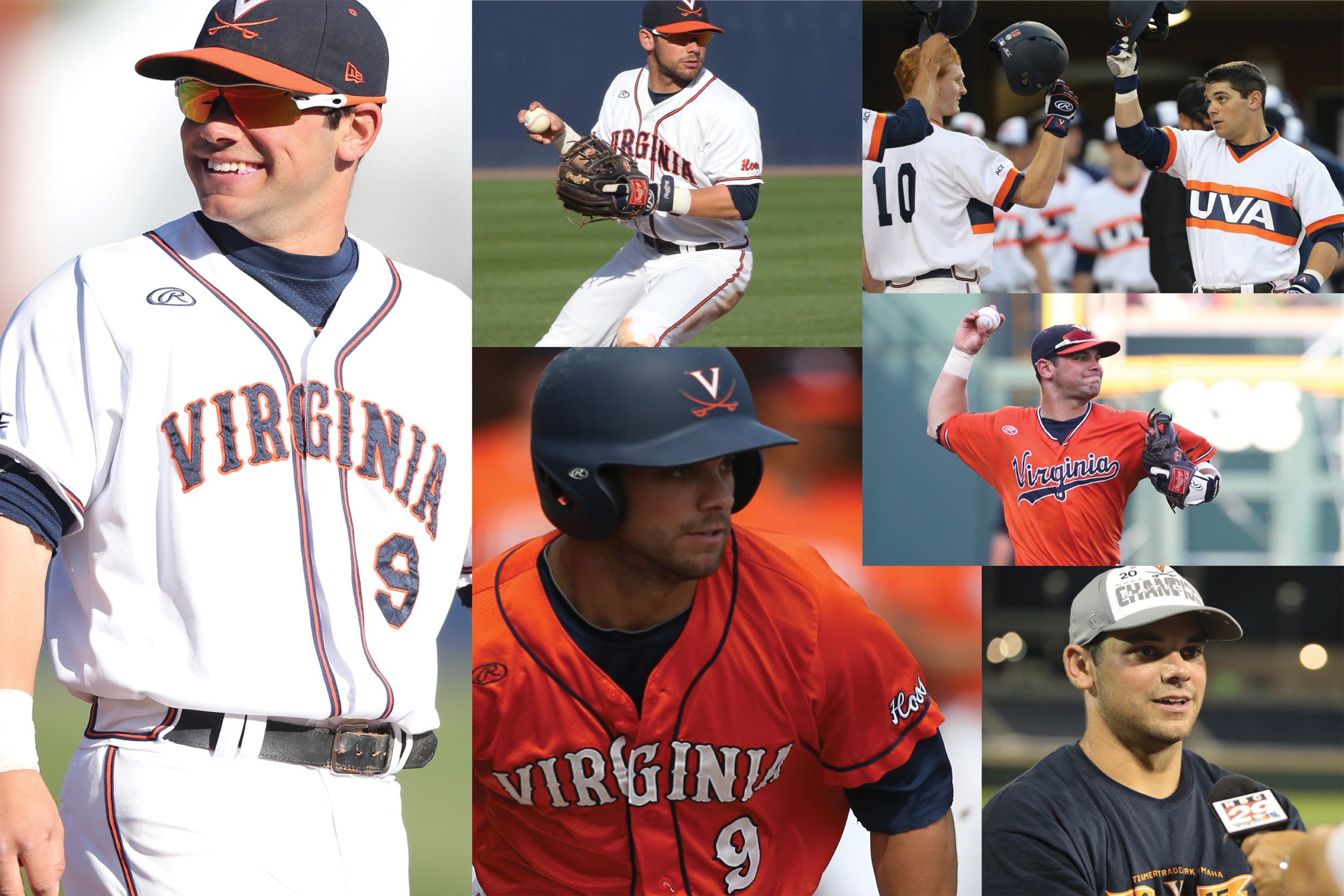 Kenny Towns had many highlights over his four years at UVA, but nothing topped his contributions to the 2015 national championship team. (UVA Athletics photos)

Seven years after he ended his career at the University of Virginia on top of the college baseball world, Kenny Towns still taps into an idiosyncrasy that was part of that magical run to the national championship.

Towns, a third baseman who earned the nickname “Mr. June” for his clutch play in the postseason, grew a mustache while UVA opened the 2015 NCAA Tournament with seven consecutive wins. He only shaved it once the Cavaliers dropped a game to the University of Florida in the College World Series – a slight bump on their road to the title.

Towns was superstitious about the ’stache back then. Now he grows it for certain occasions – like matching movie characters.

“I went to ‘Top Gun: Maverick’ last week,” Towns said of the blockbuster sequel to the 1986 thriller starring Tom Cruise, “and I had a mustache for it, just for Goose.”

There will be no special facial hair on Towns this weekend when he settles in to watch his alma mater begin its quest for a second straight trip to the College World Series in Omaha, Nebraska.

The Virginia baseball team is a No. 2 seed in the NCAA’s Greenville, North Carolina, Regional. Coach Brian O’Connor’s Cavaliers, making their 19th appearance in the NCAA Tournament, take on third-seeded Coastal Carolina University on Friday at 6 p.m. on the campus of East Carolina University. This double-elimination regional also includes top-seeded East Carolina and fourth-seeded Coppin State University. The survivor of the Greenville regional will face the winner of the Austin, Texas, Regional in next week’s super regional round.

It’s a long journey that Towns knows well. UVA’s all-time leader for postseason hits, runs batted in, doubles and games played, among other categories, he was part of 23 NCAA Tournament wins while in a Wahoo uniform from 2012 to 2015, including two trips to Omaha. His diving, run-saving stop of a screaming ground ball and ensuing strike to first baseman Pavin Smith is the signature play of UVA’s 4-2 win over Vanderbilt University that clinched the 2015 national championship. 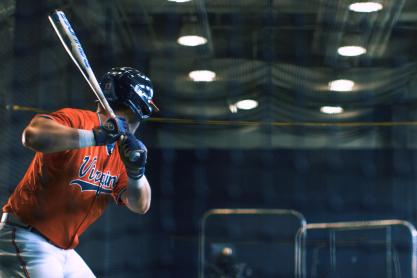 UVA Today caught up with Towns to relive some of his best memories as a Hoo, share his special connection to East Carolina and offer his thoughts on this year’s Virginia team.

Towns, who was selected by the Los Angeles Angels in the 2015 Major League Baseball draft, retired from the game in 2018 and is now a sales representative for GovSmart, an IT product provider for the federal government.

Q. On Feb. 15, 2013, at East Carolina, you became the only player in UVA history to hit two grand slams in one game. What do you remember about that day?

A. It was one of those games where I just blacked out. I didn’t know what happened. Just to be put in the situation where you’re up with the bases loaded twice in the game is pretty rare. I was able to take a couple good swings, I guess.

The first one was the first home run of my college career. I’ll never forget [ECU pitcher Jeff Hoffman, a future first-round pick of the Toronto Blue Jays] threw a curveball right down the middle on the first pitch and it was called a ball. I thought for sure it was going to be a strike. It changed the whole at-bat. He then had to come back with a fastball, and I got a good swing on it.

Q. Why do you think you had so much success in the postseason?

A. The consistency from the coaching staff played a big role. Their teaching approach from day one when you arrived there was to work so hard and get those fundamentals down to when those pressure times came, you didn’t have to do anything different. I think that was the main thing for me.

Also, in the playoffs, for some reason when there’s more pressure on the line, pitchers were more predictable. You knew they were going to go to their best pitch, you knew they were going to do this, going to do that. It was all about having the right approach at the plate and being well-prepared. We always did our homework before every series and every game, figuring out what pitches guys like to throw and what they tend to do when they need to get an out.

Q. Since 2009, only Florida has made the College World Series more times than Virginia’s five appearances, all coming under O’Connor. What makes this coaching staff so good at getting the best out of their players this time of year?

A. Everything they do is meant to prepare you for this time of year. You might not get it at the time and you might wonder why we’re having a bunt scrimmage again or why we’re doing this little drill again, but it’s all to force you to do those reps. It’s all preparation so that you can execute in a hard situation.

They don’t create any more pressure than there needs to be. It’s just like, “Hey, we’ve done this all year long. This at-bat in the College World Series is the same as your second at-bat in the fall. We’ve practiced for this; we need to execute this.”

And those guys are on your side and hoping for you to succeed as much as you are.

Q. At some point over the next four weeks, ESPN is likely to include your play against Vanderbilt in a College World Series highlight montage. When you see it all these years later, what comes to mind?

A. First thing that comes to mind is, “Thank God I got it.” But really, it’s “Thank God Pavin was there to make that play at first.” Because, yeah, it was a nice diving play – cool that I fielded it – but if Pavin doesn’t handle that footwork correctly, who knows, we might be having a different conversation and we don’t care about what the heck Kenny Towns did in 2015.

Q. Do you still hear from people about that play?

A. Every once and a while I’ll get a Facebook message or something. “Oh man, I remember that play.” If someone I’m talking to is familiar with the UVA program, I would think I’m going to hear about it.

Q. Jake Gelof, who plays your old position at UVA, has 19 home runs and 74 RBI, inching toward program records in both categories. How impressed are you by his season? Are there certain parts of his game that you enjoy watching?

A. I’m impressed with every facet of his game. It’s easy to talk about how well he hits because he goes up there with aggressive swings while still having good balance. He’s able to change his approach when he needs to and put something in play.

But from the games I’ve watched, I think he’s an exceptional fielder as well. It’s an underrated part of his game because he’s hitting everything out of the ballpark, but he plays a really good third base.

It’s exciting to watch him play. Driving in runs like that is nuts.

Q. Gelof is the headliner, but this UVA offense enters the NCAA Tournament among the top 20 in the country in both team batting average and runs scored. What do you think about their chances this month?

A. You can just look at their lineup card and pretty much everyone on there, their numbers are good. Everyone’s produced throughout the entire year. That makes them dangerous.

Shoot, at the beginning of the year, it felt like they scored over 10 runs like 20 games in a row. It’s pretty bonkers what they’ve been able to do.

Obviously, I haven’t been in there and watched them practice and what they’re preaching and stuff, but I think these guys are talented hitters and they’ve proven that they can do it and I’m sure [O’Connor] and [UVA hitting coach Kevin McMullan] and all of them are letting them go out there and do their thing. They’re obviously teaching their approach like they always do, but I think they’re giving them that free rein to go out there and take some hacks. And when they need to, they can tone it down and do whatever needs to get done to help the team. But it just seems like everyone walks up there with a little bit of a swagger. Everyone has that comfortability of being in the box, especially those young guys.

I’m excited to see what happens.