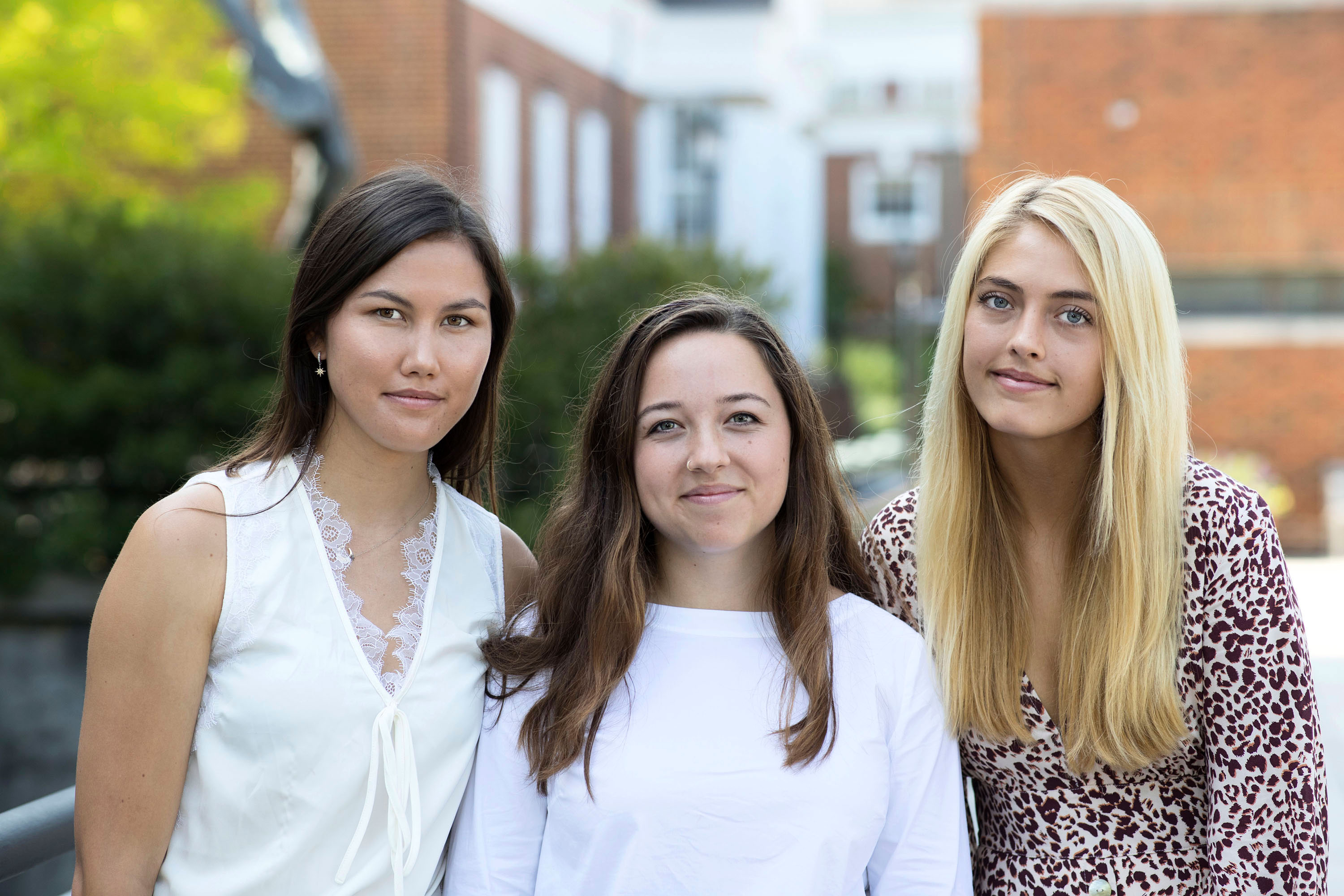 “What is life? It is the flash of a firefly in the night. It is the breath of a buffalo in the wintertime. It is the little shadow which runs across the grass and loses itself in the sunset.”

Megan Eisenfelder wants to be a large-animal veterinarian, and she has spent parts of the past three summers with some of the largest animals in the country – bison, which can weigh around a ton and stand 7-feet tall at the shoulder – as she conducts research on the potential benefits of restoring them to the Great Plains.

Eisenfelder, a University of Virginia fourth-year global development studies and biology major from Fort Lauderdale, Florida, started her research on the Lake Traverse Reservation, home of the Sisseton Wahpeton Oyate, in the northeast corner of South Dakota three years ago. She was intrigued by claims of a rancher there who said grazing bison on his land was restoring native plants not seen in years. In 2017, Eisenfelder went to South Dakota alone to start what has turned into a multi-year project, now involving several other UVA students. The research is partly funded by the Jefferson Trust and a grant from the Glenn and Susan Brace Center for Global Health Scholar Award.

“Our hypothesis is that bison grazing will increase plant heterogeneity and overall health of the fields,” Eisenfelder said. “Bison co-evolved with the native tall-grass prairie whereas cattle is an introduced species from Europe.”

South Dakota rancher Gerald German, who manages both bison and cattle herds, but keeps the herds segregated, first noticed the restoration of native plants in his bison fields, plants that had not been seen there for decades. David Edmunds, an associate professor of global development at UVA doing other research in the region, heard about the phenomenon from reservation resident Dusty Gill. Edmunds mentioned it to Eisenfelder, who ended up going to South Dakota as a Center for Global Health Scholar. Gill provided logistical support for Eisenfelder on the reservation.

“My entire college career has been tailored around this project,” Eisenfelder said. “My first year it was just me, the only person working on the project, I went to South Dakota alone and was responsible for about eight high school students, which was a little overwhelming.”

The research project includes not only working with the bison and studying and recording prairie plants, but also teaching a two-week environmental science and activism course for students from the Tiospa Zina High School on the Lake Traverse Reservation. UVA has had a presence on the reservation for about six years, working with indigenous people on mental health, stress and trauma issues and operating a computer camp.

“The educational outreach program is critical to the project that stems from the rangeland ecology research,” Eisenfelder said. “We work with tribal high school students to teach them key science research skills, while also integrating aspects of native culture such as language and ethnobotany. All together the project will run for four years with a team of at least five UVA students and six tribal high schoolers working on the project.”

The second year, Eisenfelder brought additional UVA students with her, which also increased her responsibilities.

“I had to learn a lot of management skills because at that point I had about six other people working on the project, all undergrads,” she said. “Over the time I have worked on this project, there have been about 12 people have come and gone. I had to learn how to be a manager and a team leader and handle conflict resolution within the team. It has been a full-time job for me but also I have learned a lot.”

“Megan has built good and respectful relations with the people there,” Edmunds said, adding that he has reassessed some of his priorities since he has been visiting the reservation and seeing another way of life. “UVA students can learn a lot from their Dakota hosts too, about how to live in a good way with their environments.”

This year, Eisenfelder brought five others with her, including Magnolia “Maggie” Matthews of Charlottesville, an environmental science major with an urban and environmental planning minor who entered the Frank Batten School of Leadership and Public Policy this fall, and Sophie Wong, of Ashburn, a second-year environmental science and biology major. The pair will be taking over Eisenfelder’s program next summer.

“I was really interested in environmental work but I didn’t want to just do research,” Matthews said. “I really liked the two-fold aspect of this project because you have the community engagement and the science.”

Eisenfelder was Wong’s mentor and brought her into the project when Wong, in her first weeks at the University, mentioned that she was interested in a career of scientific research.

“Right now I am heavily research focused, ideally concentrating on wildlife conservation and marine biology, so working on grasslands is a bit weird, but I’m loving it so far,” Wong said. “I had to learn how to work on a team for a project like this, especially in an environment like the middle of a cattle field. One time we were working this one field with all their rodeo cows – and those cows are mean. We were trying to cut these samples of grass and constantly checking over our shoulders to make sure they weren’t rushing up on us. That was fun and exciting. I can identify nine types of grass now.”

Among those grasses are prairie smoke and big bluestem grass, two native plants that have returned to German’s ranch. The prairie smoke, a perennial that derives its name from its wispy seed heads, has been getting rare on its range of late, apparently being choked out by invasive species. Bluestem is a native prairie forage plant which Eisenfelder also says is being crowded out.

“Prairie smoke was the key one they hadn’t seen in a long time,” Eisenfelder said.

Eisenfelder credits the different grazing habits of bison and cattle for the plant’s reappearance.

“Cows will spread out and haphazardly eat while bison stay together as a grazing unit and eat an area down, similar to burning practices or destructive practices where they graze heavily in one area and then move on,” Eisenfelder said “That is better for plant growth, the whole turnover of plants and seeds. It is more beneficial to plant growth than haphazardly grazing cows. The plants come back stronger and bison can also disperse seeds better, too.”

Bison hooves are shaped differently from cattle’s, and Eisenfelder said they aerate and “till” the soil more than cattle hooves.

Bison are raised for their meat value and Eisenfelder said there is a growing market for bison, which is leaner than beef.

“Going out to South Dakota was completely foreign to me,” Matthews said. “I had a homestay and was fully immersed with a family on the reservation. It was interesting being part of their family, going to baby showers and just hanging out with them. They had two adorable little kids and we would babysit them and put them to bed and make them banana bread.”

Through her experience, Matthews has become more interested in tribal government and student activism in supporting the tribal government to enforce federal Environmental Protection Agency regulations on pesticide use.

“I think that could be a really interesting route to take because all the kids were obviously personally affected by the lack of enforcement of these regulations,” Matthews said. “And they are interested in changing the regulations or reducing the use of pesticides on the farmland. The extent the pesticides are being used is really damaging to their native lands.”

Wong, who has wanted to be a scientific researcher since she was eight years old, said the summer’s experience broadened her perspective.

“The community collaboration we have with this project … definitely has strong implications for what I want to be doing with my research,” Wong said. “The whole point of this project is to share the data we find with the tribe and the reservation. I think that kind of open source and open data is really important, working with the community instead of just trying to publish another paper from it.”

And it may change her career path.

“At some point after graduating and doing my research, I want to get back into education,” Wong said. “I like working with students. Just seeing how some of the students lit up when we were talking about species of grass and identifying the different plants … I think it is very empowering.”

Eisenfelder, who graduates in December, plans to apply to veterinary schools after taking some time off.

“I am moving to Lexington, Kentucky, to work as a veterinary technician for the thoroughbred breeding season,” she said. “I am interested in large animal reproduction in general so that could include bison. I spend a lot of time thinking about and researching bison embryo transfers and in vitro fertilization of bison but that is an ‘in-my-free-time’ thing.”

She is specializing for now in treating horses, which have surrounded her since childhood. She first learned riding in Florida, where she was in school with Seminole students.

“I grew up riding horses, since I was 7 years old,” she said. “The Seminole tribes use horses a lot because they raise cattle in Florida. There are rodeos in Florida. I did barrel racing. I also spent time in the summers rodeoing in Montana, so I came into contact with people from reservations in Montana.”

Eisenfelder still competes on the Virginia riding team as a show jumper and last year she was the Virginia Collegiate Cup Overall Rider of the Year.

It’s Copperhead Season in Virginia. Here Is What You Need to Know END_OF_DOCUMENT_TOKEN_TO_BE_REPLACED

What’s Next for UVA’s Class of 2022? END_OF_DOCUMENT_TOKEN_TO_BE_REPLACED