On a Wing and a Prayer, Hoos Flying Club Is Best in the U.S. 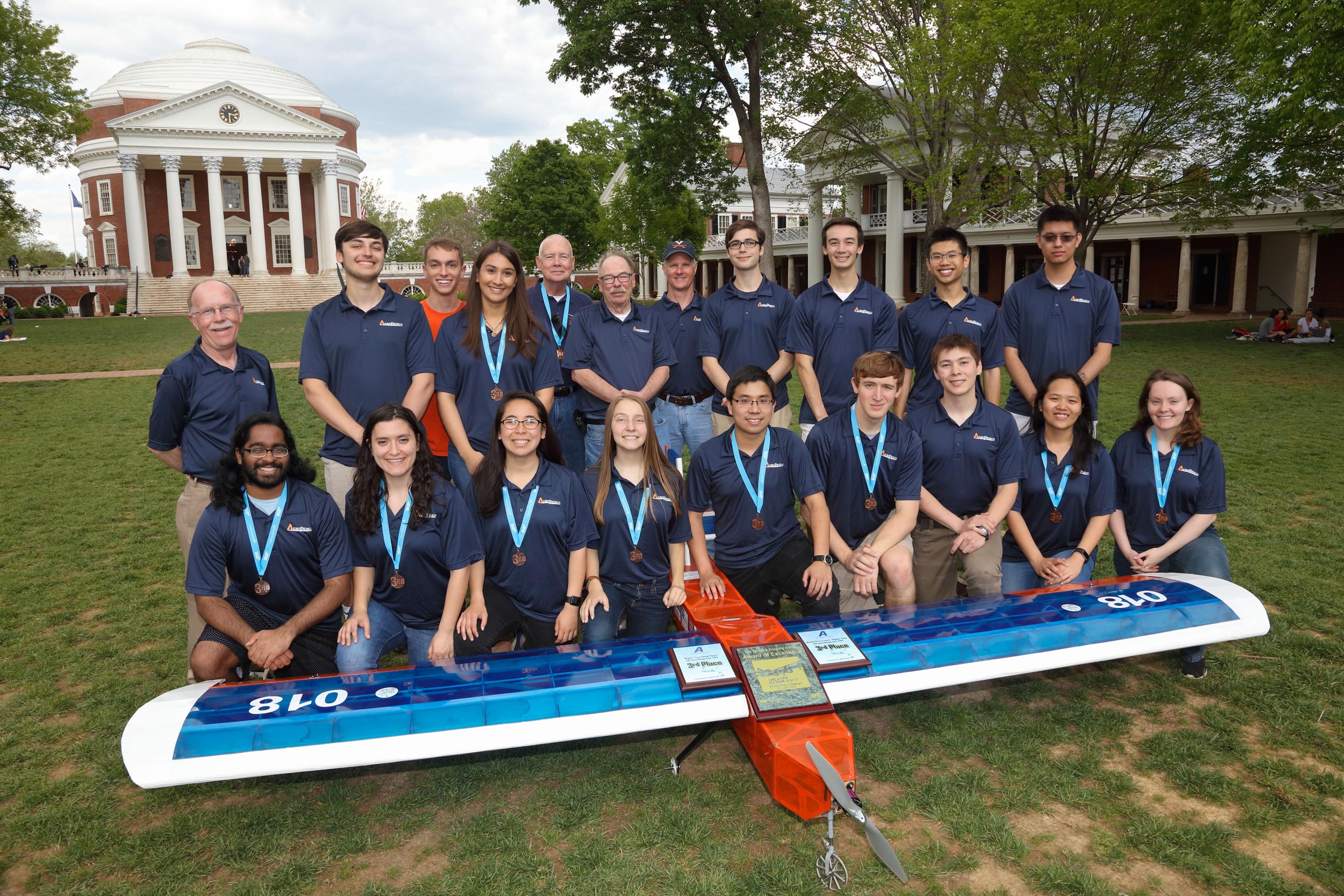 The Hoos Flying Club went to Texas and took on the world – and the winds.

The University of Virginia team competed in March in the Society of Automotive Engineers Aero Design East International Competition in Fort Worth, going up against 43 teams from around the world with a radio-controlled model airplane competition that rewarded their design and construction and the plane’s performance.

The UVA group came in third overall, behind teams from Canada and China, and first among the 23 U.S. teams.

“The University should be justly proud of this Engineering School achievement,” said David Eames, a faculty member in the Department of Mechanical and Aerospace Engineering and one of the club’s advisers. Other advisers included George Cahen, Lloyd Barrett and David Sheffler.

On its first flight, fighting 20-to 30-mph crosswinds, the blue, white and orange airplane taxied down the runway, lifted off tentatively, wobbled in the wind a little, and then flew into a blue and cloudless sky. It dipped and fluttered, buffeted by the winds, and made a long, turbulent turn to reverse direction, accompanied by scattered applause. It flew back over the airfield as team members along the runway called encouragement: “C’mon! C’mon!”

As it reversed course again and swooped down toward the field for landing, the crosswind twisted it sideways as it descended and a team member shouted “No-no-no-no-no-no-no-no-no!” until the plane suddenly righted itself, touched down on the runway with a jolt and bounced back up in the air. “Oh my god! Oh my god!” someone shouted as the plane lifted a little and then settled back on to the airfield, balanced smartly on its three wheels and rolled to a full stop, intact.

Team members rushed on to the field hugging each other and jumping up and down. There were only two successful flights that round, the rest kept aground by the fierce winds.

The team was ecstatic at the success. Two years ago, the UVA plane had crashed only three days before the competition, pushed into trees by a crosswind and damaging one of its wings.

“The hand of God slapped it down,” Huy D. Tran, a rising fourth-year aerospace engineering major from Ho Chi Minh City, Vietnam, and co-captain of the team, said of the pre-competition mishap.

Under the rules, the competing planes had to complete a flight circuit around the landing field. Each plane had two minutes to take off within 200 feet, complete a 360-degree flight loop, and then land, taking no more than 400 feet, coming to a complete stop in one piece. During the competition, one of the other teams’ planes split in half lengthwise upon landing, but held together until it came to a complete stop. The team was credited with a successful flight.

The Flying Club completed four of six flights during the three-day competition, opting out of one because the crosswinds were too severe and missing another to repair a steering issue. In the four completed flights, their radio-controlled airplane stayed in the air for about a minute and a half per flight.

The team brought in a last-minute pilot, Sam Corlett, a member of the Fort Worth Thunderbirds Radio Control Association, who replaced George Cahen, the team’s academic adviser and regular pilot, who was unable to make the trip. The pilot manipulates the plane using a hand-held transmitter.

“Sam did a fantastic job flying our plane and controlled it well, even with the severe crosswinds,” said Diana Nguyen, a fourth-year aerospace engineering from Springfield. “The landings he had to make due to the winds were very impressive.” 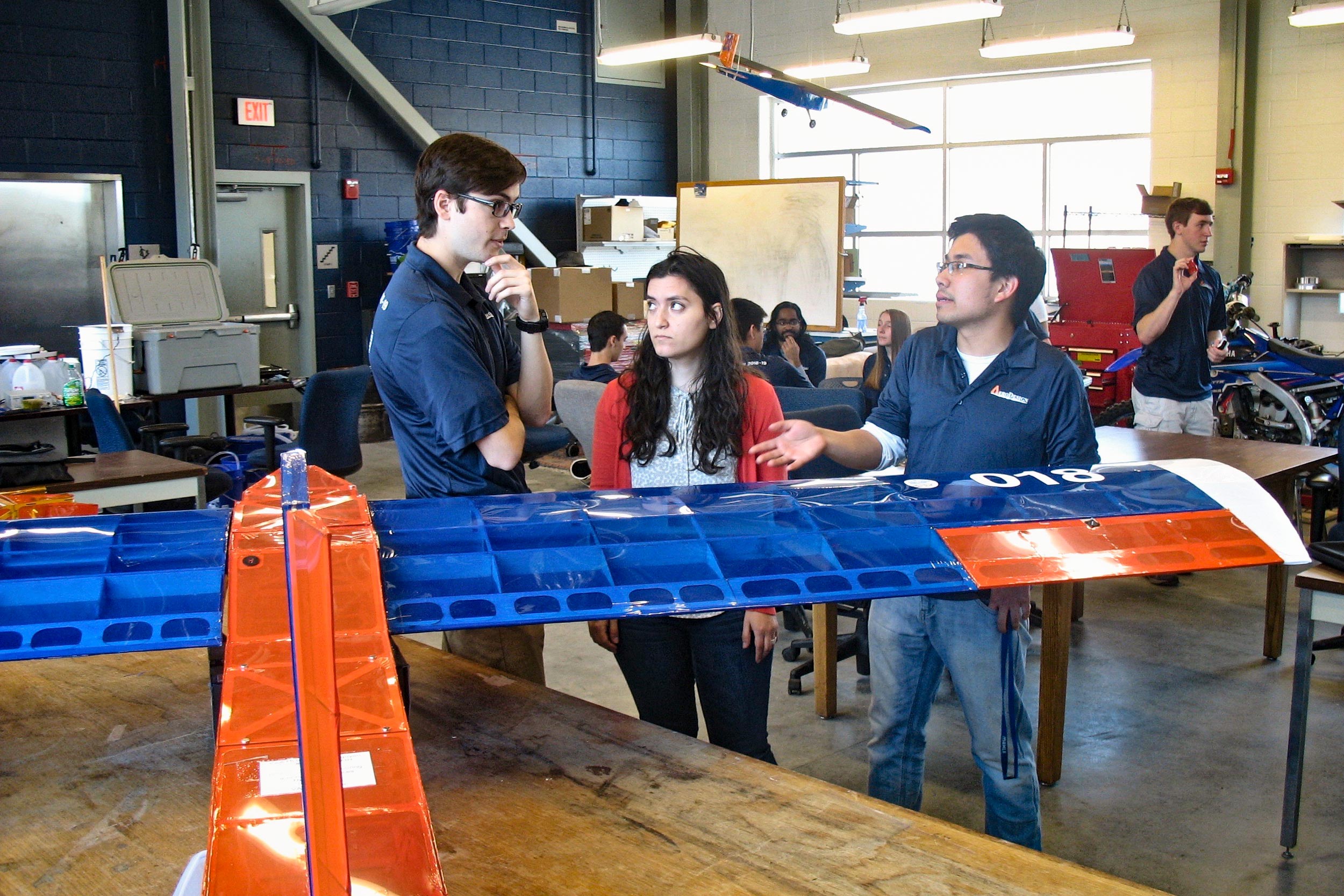 For the competition, the team designs, builds and flies an aircraft that can carry as much payload as possible while adhering to the competition requirements – in this case having an electric motor with a 1-kilowatt power limit and a maximum 12-foot wingspan. There were three stages of competition: a technical report, limited to 30 pages, outlining the design; an oral presentation to a committee of judges; and two flight days.

“We selected a Hacker motor and APC propeller for the propulsion system,” Nguyen said. “The wing is unique in that it incorporates Hoerner wingtips, increasing the effective wingspan without increasing the geometric wingspan, which essentially helps give us a little bit more lift.

“The fuselage has a unique design because it is comprised of multiple pieces that were laser cut with dove-tail connections to fit together like puzzle pieces,” she added. “The tail was also designed well this year, as our tail-lead was able to increase its structural strength but decrease the weight by 54 percent. The landing gear this year was also special because the team manufactured the wheels specifically for the landing gear. Multiple custom wheel designs were tested before a final wheel design was selected and manufactured with the water-jet machine in Lacy Hall.”

Several team members said they enjoyed the hands-on aspect of the club, which they said gave them an opportunity to see a project all the way through and to overcome real-life challenges.

“With this, you learn how to cope with failure before you get into the workplace,” said Caroline Pavlak, a fourth-year aerospace engineering major from Fredericksburg. “It’s better to do this now than when lives are at risk.”

The Flying Club, whose membership includes 20 to 30 students from a variety of engineering departments, designed an airplane that would carry a payload of tennis balls for passengers and small eight-ounce metal slabs for luggage. The airplane is built of a balsa and birch laminate, with a plastic skin stretched over the frame and heated so it tightened in place. Dubbed the “HF-19” (Hoos Flying 2019), the fuselage is 86 inches long with a 143-inch wingspan. Empty, the plane weighs 12.8 pounds, with a maximum take-off weight of 55 pounds.

“All the elements depend on each other, such as the landing gear depending on the load weight,” Pavlak said. “You have to think about all the other components.”

The competition itself was decided on a combination of written and oral reports as well as the actual flying. In the technical report, the judges looked for an understanding of all the components of the project.

“Our report was written by all of our team leads and was peer-reviewed by other team members,” Nguyen said. “Overall, our report scored third place.”

The team’s oral presentation, limited to 10 minutes, was judged on the same points and overall quality.

“In our presentation, we had a total of seven people, almost all of the team leaders present and ours was ranked sixth place,” Nguyen said.

“As third-place winners, we are automatically registered for next year’s competition, which generally fills up within two minutes, and we received $500 in prize money,” Nguyen said. “We also got plaques for each category that we won and each team member got a third-place medal.”

The team had five fourth-year students and will have to rebuild to compete in next year’s event, which will use a new set of as-yet-unavailable regulations. This year, the airplanes were powered with electric motors; several years ago, they used gasoline-powered motors.

The Hoos Flying Club regrouped in the 2016-17 school year after two years of inactivity, built two airplanes and endured a steady string of failures. Then last year, competing in the same competition, it came in fifth overall and second among U.S. schools, behind Texas A&M University.

“The next step for us is to analyze what worked well and what didn’t this year,” Nguyen said. “Next year’s competition will be completely different, so it is difficult to start working on another design until the rules for the 2020 competition come out, which won’t be until September.”

“Ultimately, our success with this competition helps improve our team’s reputation, as well as the [Mechanical and Aerospace Engineering] department’s reputation,” Nguyen said. “We were very fortunate to be able to use the flight field out in Fluvanna, courtesy of the Fluvanna Radio Control Club, and Milton Field, thanks to the Rivanna Radio Control Club. We got a lot of supplies from the University Dive and Hobby Shop, too. And the UVA School of Architecture let us use its laser cutters to manufacture the majority of our plane’s wooden frame.”

What Is the ‘4th Side’? END_OF_DOCUMENT_TOKEN_TO_BE_REPLACED