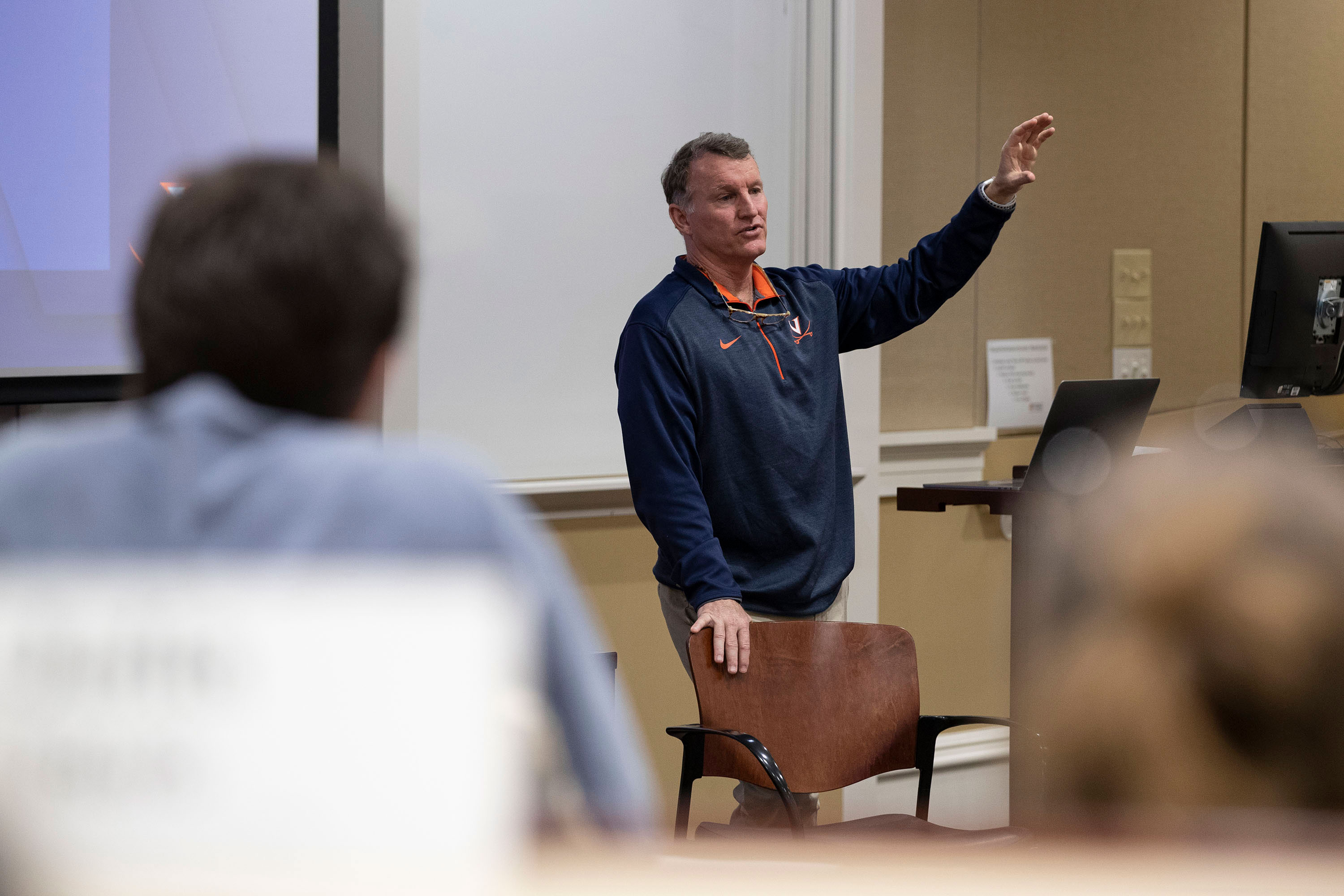 Making the most of every second is one of the leadership tips UVA women’s soccer head coach Steve Swanson gave to students. (Photos by Dan Addison, University Communications)

A line from the famous poem, “The Laws of the Navy,” was on the projection screen in room 123 of the University of Virginia’s Robertson Hall on Thursday morning.

“On the strength of one length of the cable dependeth the might of the chain. Who knows when you may be tested, so live that you can bear the strain.”

“What can you take away from that?” Steve Swanson asked the 50 some-odd students in the classroom. “What would that mean to you?”

Second-year student Sara Templeton chimed in. “I think it means that every link of the chain is important to make it strong, and so at some point there’s going to be strain on one member of a team, and that’s going to determine how the team, as a whole, performs.”

The interaction was one of many between Swanson, the University of Virginia women’s soccer head coach, and students in the McIntire School of Commerce course.

The course, “Leaderships Across the Disciplines,” part of a newly relaunched leadership minor at McIntire, provides both commerce students and those enrolled in other UVA schools the chance to be a part of the McIntire environment.

“We talk about leadership in a broad enough way that you can take those lessons and apply them to your context,” said the course’s instructor, Jeffrey Lovelace, a McIntire management professor and director of the leadership minor program. “We can develop better leaders when they leave UVA. That’s our goal.”

Swanson is one of a number of speakers in the course this semester.

On Thursday, Swanson – who also has served as assistant coach for the World Cup-winning United States women’s national team – shared leadership lessons he has picked up during his 30-year career.

Leadership Starts Inside You

“I tell our players, ‘What can you do every day to bring your best to the team?’” Swanson said. “It’s almost like you being here, you’ve come to this class – what can you do to prepare yourself the most to get the most out of class? I think that starts with you.

“What you bring on the inside is really important. Be curious, get better at what you do.”

Don’t Compare Yourself to Others

“When I was a young coach – and I don’t think this was a good thing – I compared a lot,” Swanson said. “I think it’s important you stay focused on your path, your mission and what your purpose is. You can get sidetracked quite a bit if you compare yourself to others.

“Sometimes I would do that. I would look at other ACC programs, for example, and say, ‘Oh, they just signed this recruit – what’s that going to do to us?’ You start taking away the joy of what you do, and I think that affects you as a leader.

“For me, it’s been very important to focus on my journey, my path, my passion. What is it that I really love and want to do? I want to keep away from the comparison part. They say comparison is the thief of joy, and I think that’s true in a lot of ways.”

Everyone Has a Role, Every Role Matters

“I think if you lead any organization, team, family … you have to try and understand that everyone has a role, and that every role matters. It doesn’t matter what your role is. When you have teams where some players play a lot and some players may not – do they have a role just like everybody else’s? Yes. And, at times, they’re going to be asked to do something within that role.”

As an example, Swanson used a goal-saving play by national team player Meghan Klingenberg in a 2015 World Cup game against Sweden that preserved a scoreless draw.

“Her role on this corner kick was to cover the post for the goalie, Hope Solo,” said Swanson, using a pointer to identify Klingenberg in a video clip on the screen. “The shot went rocketing right through here, and Meghan got all of her 5-foot-4-inches up [in the air] and headed it against the crossbar.

“That was her role. She performed her role, we choreographed that, we worked on that. … We would have lost that game if she didn’t stop that. In my opinion, it would have made our World Cup tournament much more difficult to navigate because we would have had to play a lot harder teams earlier. It was a difference-maker.

“Was her role the most important on the team, if you looked at priorities by somebody on the outside looking at it? Probably not. But she was as just as much responsible for our winning the World Cup.” 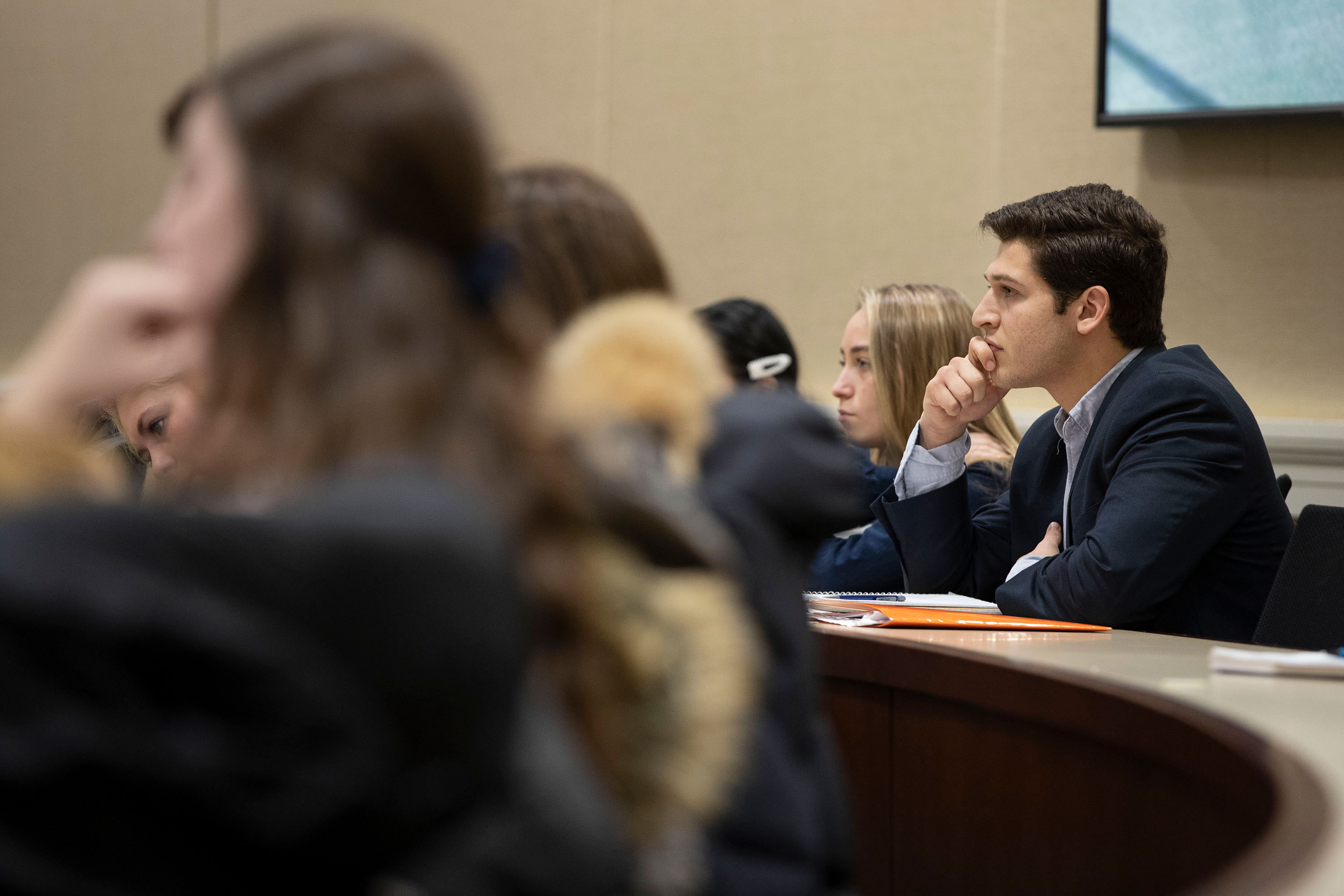 Trust Is Built on Relationships

Swanson said no matter how much technology is available to today’s coaches, it is still a must that they connect deeply with their players.

“I like to get in, analyze a game, think about the strategy we can use – that’s where my comfort zone is,” he said. “But if I didn’t try and communicate the strategies to the players, if I wasn’t good about that, if I stayed within my comfort zone, these are issues that would impact the team.

“So what I have to do every day is get out of my comfort zone and talk and communicate and develop relationships with my players. And I think all of that is trying to develop a trust so that we can perform under pressure.”

Swanson showed the students a grid he uses that maps out 100 years of a person’s life.

On the grid, the years between 18 and 22 were highlighted.

“You’re at a world-class university, so squeeze as much out of it as you can,” he said.

“Are you going to sit back and let things come to you or are you going to go after it? For me, as a leader, you have to make every second count. You have to try and make a difference in these years – and all your years. Make the difference. Use your years wisely. Squeeze as much as you can out of them.

“For us, we try and make the most of every single second we have with these players because that helps our team and helps our performance.”

“I’ve had a lot of success in my career, but I can tell you, exponentially, I’ve had way more failures. I’ve been trying win a national championship for 30 years. We’ve gotten really close, but it hasn’t happened yet. But every single year, I’m going back and investing as much, if not more, to make sure that it happens in that particular year.

“We’ve had heartbreak, disappointment, setbacks, adversity. This past year we were 17-2 – lost two games the whole year. Two games. We were a failure this year if you looked at our goals. We wanted to win an ACC championship, and lost in the finals in overtime. We wanted to win an NCAA championship, and we lost in the second round. Two games. That’s our standard. That’s our expectation. It was very disappointing.

Build a Team of Leaders

Swanson told the class about a book he once read about an Australian field hockey coach who decided not to have team captains.

“He felt that, all of a sudden, in a team setting, if one or two players were elected the leaders, then there would be ‘social loafing’ – nobody else would be involved in the leading of the team. He just wanted his team to be a bunch of leaders. He called it a ‘Leaderful team.’ That resonated with me.

“At Virginia, we have a leadership committee, consisting of our fourth- and fifth-years. All the players who have gone through our program and who have invested – they deserve to be leaders. And then we add one player from each class and that’s our committee.

“We do have captains because it’s tradition, but those captains we have are only for on the field. If there’s any sort of off-the-field issues, we deal with it as a committee. I think everybody can be a leader.”

Leadership Is About Filling Gaps

“Our [former] national team coach [Jill Ellis] was a very analytical coach and had a lot on her plate. I figured, ‘How could I help her?’ I thought I could talk to players individually, go over video with them. I could kind of help bridge the gap. It’s not something that I waited for somebody to tell me to do; I just got in there and did it.

“I think no matter what organization you’re talking about, you have to be like that. That’s important.”