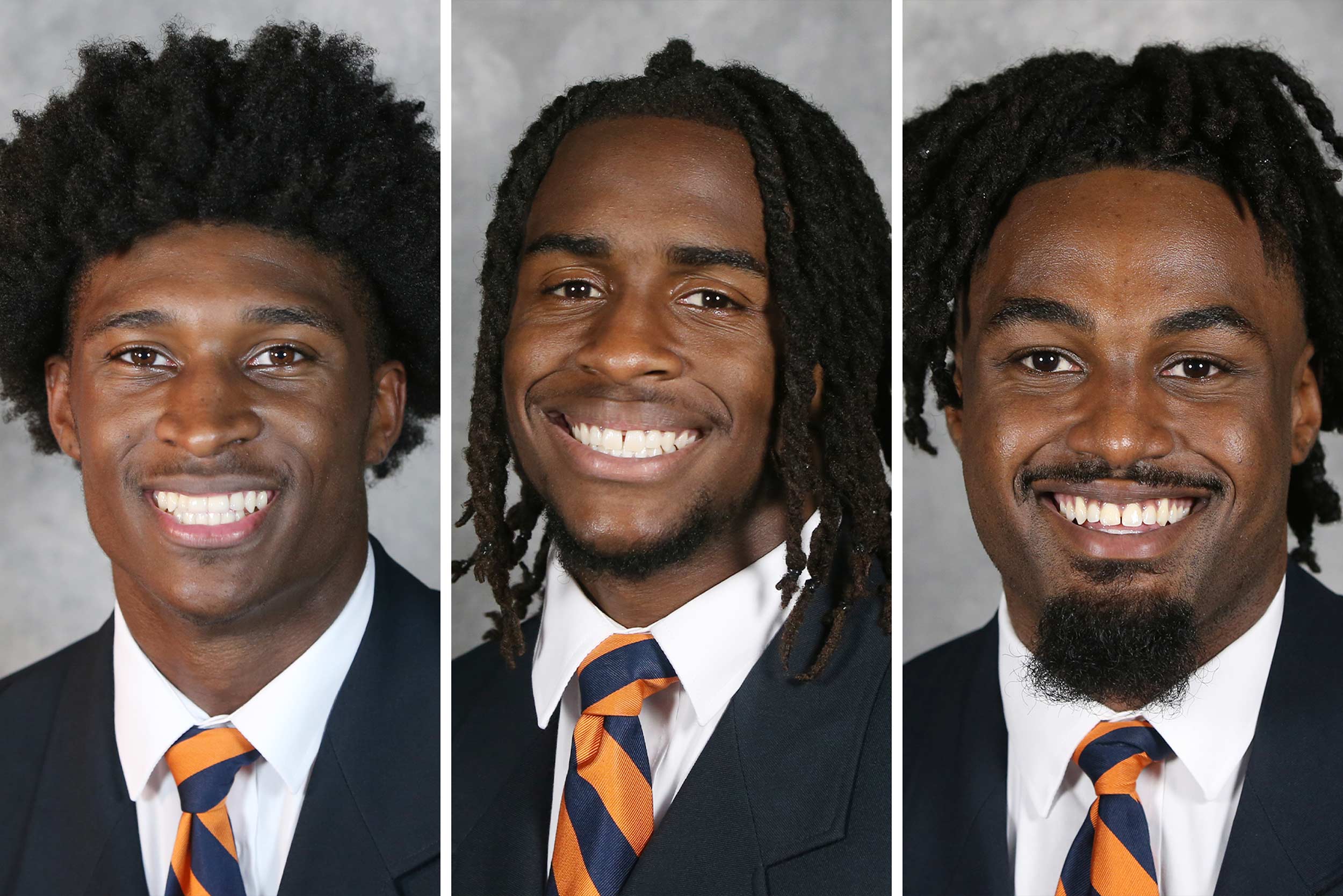 “These precious young men were called away too soon,” Elliott said. “We are all fortunate to have them be a part of our lives. They touched us, inspired us and worked incredibly hard as representatives of our program.”

Chandler, a third-year student, was from Huntersville, North Carolina. The wide receiver came to UVA last winter after transferring from the University of Wisconsin. He had yet to make his playing debut for the Cavaliers.

Davis was a third-year student from Dorchester, South Carolina, who, as a receiver, had made 16 catches for 371 yards and two touchdowns in eight games this season, working his way back from a knee injury that caused him to miss the 2021 season.

Perry, a fourth-year student, was a linebacker and defensive end from Miami. He made two tackles in UVA’s game against the University of Pittsburgh on Saturday.

Virginia Director of Athletics Carla Williams called Chandler, Davis and Perry “bright young men” as she asked for peace and comfort for their parents and loved ones.

In a touching six-part thread on Twitter, UVA media studies professor Jack Hamilton shared some experiences from last spring when he had Chandler and Davis in his class. He called them both “wonderful people.”

both devin chandler and lavel davis were my students. devin was in my class in spring 2022, and lavel is in my class this semester. I am so indescribably sad right now but I wanted to share a few memories of them, because they were wonderful people

Chandler was eager to get a feel for his new school after transferring from Wisconsin, Hamilton said, repeatedly visiting Hamilton during office hours just to chat about how things worked around UVA. Hamilton eventually helped Chandler declare American studies as his major.

“He was an unbelievably nice person, always a huge smile, really gregarious and funny,” Hamilton said “One of those people who’s just impossible not to like. It is so sad and enraging that he is gone.”

Davis, who in 2020 put together one of the best freshman seasons by a UVA receiver in school history with 515 yards and five touchdowns in eight games, impressed Hamilton with his down-to-earth demeanor. After the first day of class, Davis went out of his way to introduce himself to Hamilton. Davis told his instructor to call him Vel.

“One thing that struck me about Vel was how much his classmates liked him and vice versa,” Hamilton said. “In my experience, star-athletes often tend to hang out with other athletes (understandable, given the time commitment) but Vel seemed to go out of his way to make friends with non-athletes.”

Hamilton concluded his thread by saying Chandler and Davis had “truly limitless futures” and “it breaks my heart” they’re gone.

In my last interview with Lavel Davis Jr., I asked why he was a part of the Groundskeepers at UVA, a group pushing for social change. His words, read now, bring tears to my eyes. pic.twitter.com/sEPtcpz79P

Perry was called the “human embodiment of resilience and perseverance” by Charles Snowden, a former Cavalier who’s now with the Tampa Bay Buccaneers of the National Football League.

In an Instagram post that included several photos and videos of Perry, Snowden said Perry was the closest thing to a little brother he’s ever had.

“He’d come to me for advice on everything from football to school to girls to simply life,” Snowden said. “But I’d say I can say without a doubt I learned a lot more from him than he did from me. He faced plenty of his ups and downs but he faced every challenge with courage and every scar only made him stronger. That is something I will never forget and always carry with me in his honor.”

Former UVA football assistant coach Mark Atuaia showed the fun side to Perry by reposting videos of him engaging in Atuaia-led team raps. “This is how I wanna remember him while I cope with this new reality.” Atuaia said.

Imma try my absolute hardest to get through the next second, minute, hour, day, month, year, earthly existence without these beautiful souls. De’sean was always down for my kookooness. This is how I wanna remember him while I cope with this new reality #Wahoowa #StillInDenial # pic.twitter.com/br9Rh8s2ZB

Large banners bearing the jersey numbers of Chandler (No. 15), Davis (No. 1) and Perry (No. 41) were on display throughout Grounds as Monday night ended.