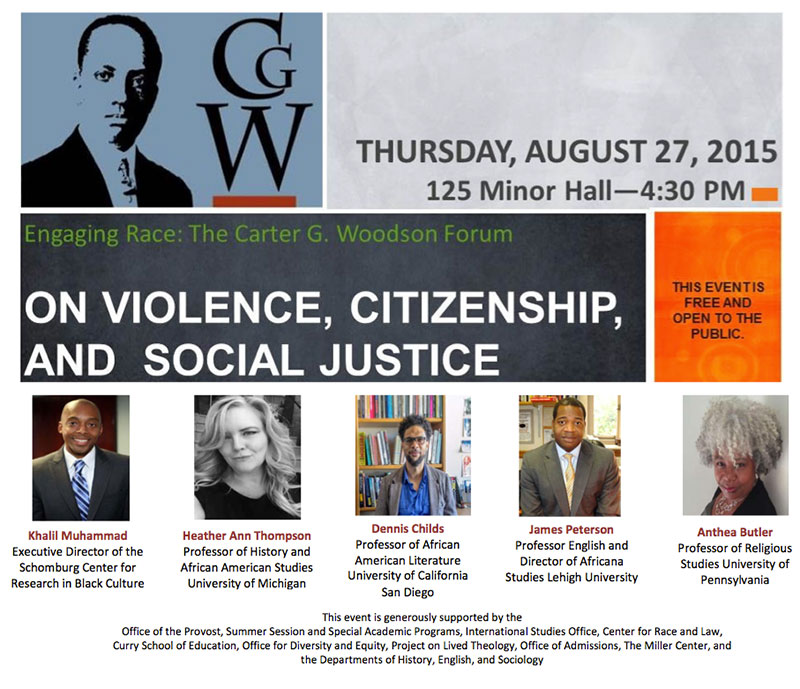 In response to recent tragic events, including the murders of Charleston church members in June, the torching of multiple churches and several police shootings of unarmed black men, the University of Virginia’s Carter G. Woodson Institute for African-American and African Studies will present a panel discussion, “Engaging Race: Forum on Race, Citizenship and Social Justice,” on Thursday at 4:30 p.m. in Minor Hall, room 125.

The event is the first of a series to be held throughout the academic year that will focus  broadly on race in American society.

The forum, free and open to the public, will feature five leading experts in African-American studies, whose current research centers on many of the issues that inspired the forum. After their remarks, there will be time for discussion between the panelists and students, faculty, staff and community members.

Dealing with key issues in today’s world is part of the academy’s mission, part of its responsibility to prepare students for the world in which they live and the world they will enter after college, said Deborah McDowell, Alice Griffin Professor of English and director of the Woodson Institute.

While the forum and other events planned for the coming year are “designed to engage questions of race in broad dimension,” McDowell said the institute especially seeks to expose students and others to emerging scholarship in African-American studies.”

“The forum is a more formal version of the ‘Currents in Conversation’ series, which the institute has sponsored for the last several years,” she said. “Focusing on a range of issues in the past – stop-and-frisk, race wealth and college admissions, race, religion and electoral politics, the politics of the debt ceiling – the ‘Currents’ series takes up topics which have sustained the public’s attention for two weeks or more, particularly those with direct implications for the lives and welfare of black people.”

The series “takes the Woodson Institute into the public square,” McDowell said, “fulfilling a major aspect of our mission: to reach and engage the public of Charlottesville and its environs.”

Khalil Muhammad, executive director of the Schomburg Center for Research in Black Culture, headlines the upcoming program. The Schomburg Center, which is part of the New York Public Library, is one of the oldest archives in the world devoted to the history of the African diaspora, especially in the Americas and the Caribbean.

Muhammad, one of the foremost scholars on the link between race and crime, published “The Condemnation of Blackness: Race, Crime and the Making of Modern America” in 2010.

Butler’s research and publication topics include African-America religious history and religion and politics. Childs, author of “Slaves of the State: Black Incarceration from the Chain Gang to the Penitentiary,” also researches and teaches about American literature and blues music. Peterson founded Hip Hop Scholars, an association dedicated to researching and developing the cultural and educational potential of hip hop, urban and youth cultures. Thompson also studies prison and race and what some critics call “the carceral state.” She is an editor of the “Justice, Power, and Politics” series of the University of North Carolina Press and author of the forthcoming book, “Blood in the Water: The Attica Uprising of 197l and Its Legacy.”

McDowell said she feels it’s important for the Woodson Institute to continue to bring to Grounds those scholars whose research is situated squarely in the debates of our day – research not always represented in the work of faculty at U.Va.

Upcoming forum topics will consider race, health and social justice and also African-American girlhood. Although recent initiatives, including President Obama’s program, “My Brother’s Keeper,” have focused on disadvantaged youth, particularly young men of color, many of the same problems they face – disparities in education, school suspension and overall criminalization, for example – are on the rise for young females of color, McDowell said.

“It’s our responsibility, at the Woodson Institute especially, to insure that our teaching, scholarship and programming engage, wherever possible, with the pressing issues of our times,” McDowell said.

Netflix to Add Ads. Why This Could Be a ‘Game-Changer’ for Your Viewing Experience END_OF_DOCUMENT_TOKEN_TO_BE_REPLACED

What’s Next for UVA’s Class of 2022? END_OF_DOCUMENT_TOKEN_TO_BE_REPLACED