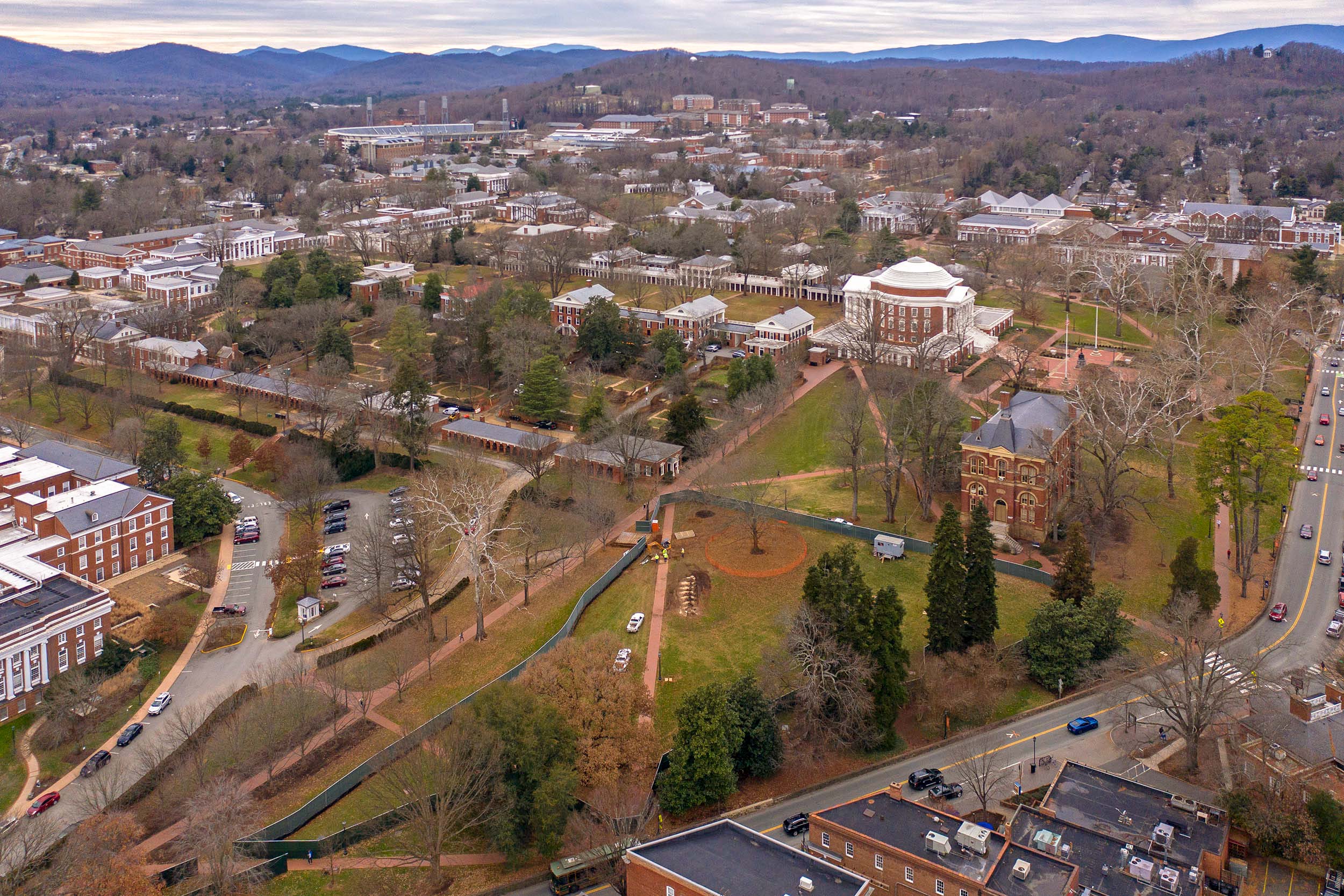 The Memorial to Enslaved Laborers will eventually be built within this fenced area east of the Rotunda. (Photo by Sanjay Suchak, University Communications)

East of the Rotunda and Brooks Hall, a tall fence wrapped in green marks out an important construction project: the future Memorial to Enslaved Laborers at the University of Virginia.

Conceived initially by students almost 10 years ago, the idea for a memorial was continued by the President’s Commission on Slavery and the University. A design team for the memorial engaged UVA and local communities in months of discussions as it developed the final concept, and the UVA Board of Visitors approved the recommendation for the memorial’s design and location in June 2017.

The Memorial to Enslaved Laborers received a significant boost in August when the Board of Visitors approved funding for the project. President Jim Ryan proposed a plan to allocate $2.5 million from the Strategic Investment Fund to establish a one-for-one matching fund for private gifts to the memorial construction fund through 2019, which the board endorsed.

“Honoring the enslaved laborers who built this University is a crucial step in fully recognizing our history as a university,” Ryan said. “I am pleased that we will be matching funds raised for this important memorial.”

Construction is underway for significant site work by general contractor Team Henry Enterprises on the “triangle of grass” across University Avenue from the Corner, including re-grading, utility work, laying a concrete foundation, improving stormwater management and sidewalks, and, ultimately, the installation of the large-scale stone blocks of the memorial. As a result, some pedestrian walkways will be rerouted during construction.

“The Memorial to Enslaved Laborers is an incredibly important step forward in the University of Virginia’s recognition of its involvement in the institution of slavery,” said Louis Nelson, a UVA professor of architectural history who is on the memorial’s community engagement committee and serves as vice provost for academic outreach. “While many institutions are now taking this history seriously, few have made this substantial a commitment to memorializing the brutality of slavery and the resilience of the enslaved. Its sobering honesty and simple beauty contribute to a sublime design worthy of a UNESCO World Heritage Site.”

The memorial’s design is both intentional and symbolic. Its outermost diameter is a symbolic nod to that of the Rotunda, and its concentric rings – made of the same granite as the Rotunda’s upper terrace and including a scrim of water – are designed to represent slavery’s broken shackles and its river paths to freedom. The outer ring will be sculpted with the subtle image of the eyes of Isabella Gibbons, a former slave who became a teacher after Emancipation, while the innermost ring will bear 973 names of those known to have been enslaved at UVA, and will include placeholders for the estimated 4,000 names that have yet to be found.

An important aspect of the design is that the rings will form a space that will encourage gatherings – from informal meetings to classes or performances. The intention is to enable visitors to encounter the complex and challenging lives of enslaved men, women and children affiliated with the University through the memorial’s features and motifs that echo bondage, but also bear witness to the perseverance of the human spirit.

The memorial’s design is a product of substantial public engagement with members of the University and Charlottesville communities, including students, alumni and local residents. The Office of the Architect for the University, along with Boston architectural firm Höweler+Yoon led the design process, teamed with Frank Dukes, co-founder of University & Community Action for Racial Equity and past director of the Institute for Environmental Negotiation in the UVA School of Architecture; alumna Mabel O. Wilson, an architectural historian at Columbia University; and Gregg Bleam, a landscape architect who has taught at UVA and worked in and around the Grounds for about 30 years. Artist Eto Otitigbe from Brooklyn, New York is designing the artwork of the exterior wall.

“This is a site of reckoning and truth-telling that really should be supported,” Wilson said in a video about the project.

The design team and the University will continue to engage the community throughout construction and as the University builds philanthropic support for the project.

Should Alcohol Have Warning Labels About Cancer Risk? Most Americans Say ‘Yes’ END_OF_DOCUMENT_TOKEN_TO_BE_REPLACED