Two decades ago, Toyota's Prius sedan rolled out of factories and into Japanese showrooms, becoming the first mass-produced gasoline/electric hybrid in an automotive landscape dominated by internal-combustion fuel engines.

It didn't happen overnight. The company describes the 1997 Prius as the "culmination of a concerted, five-year effort by Toyota Motor Corporation to develop and bring to market a practical, low-emission family vehicle."

In the end, that commitment to innovation led to business success, and a more environmentally friendly design. The iconic Prius today remains the world's best-selling hybrid vehicle in a relatively crowded segment of automobiles. In business terms, hybrid technology is mature, even if it took 20 years.

Now, the next generation of vehicles has begun to rise.

Consumer demand is surging for the fully electric Tesla. In response, Volvo, Mercedes, BMW and Toyota have all jumped into the electric car market, while multiple Chinese companies are ramping up development of electric vehicles.

"They're all making significant investments, which gives you greater evidence that we might be at that tipping point that you want to see with new technology - that it's beginning to overtake things," Darden School of Business professor Michael Lenox said.

Lenox expects a complete evolution from gasoline to hybrid to electric technology that could result in zero-emission vehicles in the decades ahead. How fast it happens could have massive ramifications, while also providing a case study in the role of business in addressing important societal issues.

We might be at that tipping point that you want to see with new technology – that it’s beginning to overtake things.

Last May, the Darden School launched an initiative to explore how innovations in the business world might bring solutions to bear on climate change. The Business Innovation and Climate Change Initiative is conducting in-depth analysis of several key issues at the intersection of business and the climate challenge; bringing business, government and academic leaders together to share and generate ideas; and helping to craft policy recommendations to contribute to solutions.

In announcing the initiative last spring, Darden School Dean Scott Beardsley zeroed in on the essence of the school's aspiration. "It's an opportunity for business leaders to help improve the world," he said.

Darden's research focuses on sectors holding the most promise for innovation that results in meaningful reductions in carbon dioxide emissions. The target areas include transportation, energy, industrials, buildings and agriculture.

The automobile industry - global in scale with fundamental changes in technology and an outsized influence on environmental quality - sits at the top of the list of business sectors whose decisions in the coming years will directly affect climate change for better or for worse.

Is 2060 possible? I would say yes. But there’s a lot of uncertainty at this point and a lot of things that have to go right for us to get there.

Lenox said the Darden initiative, spearheaded by the school's Batten Institute for Entrepreneurship and Innovation, is working from assumptions based on scientific research that global warming must be kept below 2 degrees Celsius this century to avoid the most serious impacts. The initiative also works from MIT projections that suggest all economic activity must be decarbonized by 2060 to accomplish that goal.

Which is why cars are such a big deal.

Transportation is responsible for a quarter of greenhouse-gas emissions in the United States and 14 percent globally. Moving to an emissions-free transportation system by 2060 will require urgency and purpose, but perhaps most of all, disruptive innovation to make it possible.

"The framing question we have in our analysis is whether now is the time when electric vehicles can truly be a disruptor," Lenox said. "And by disruptor we mean a substitute that ultimately replaces internal-combustion engines."

Answering that question requires a closer look at several factors, such as the maturity of electric-vehicle technology, the costs for entrepreneurs and consumers, the influence of government policy, and the elixir of competition driving the pace of change.

"Is 2060 possible? I would say yes," Lenox said. "But there's a lot of uncertainty at this point and a lot of things that have to go right for us to get there." 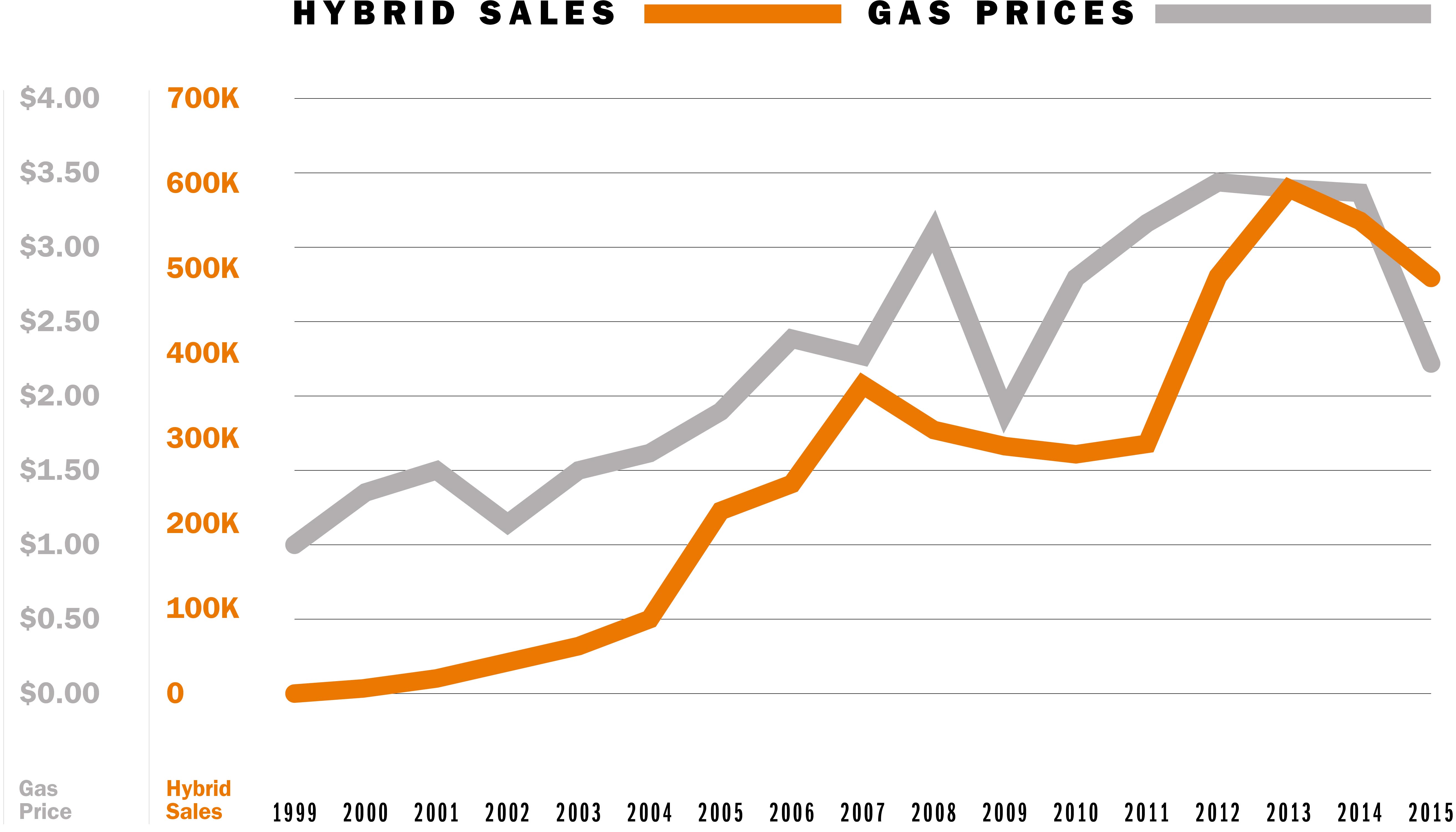 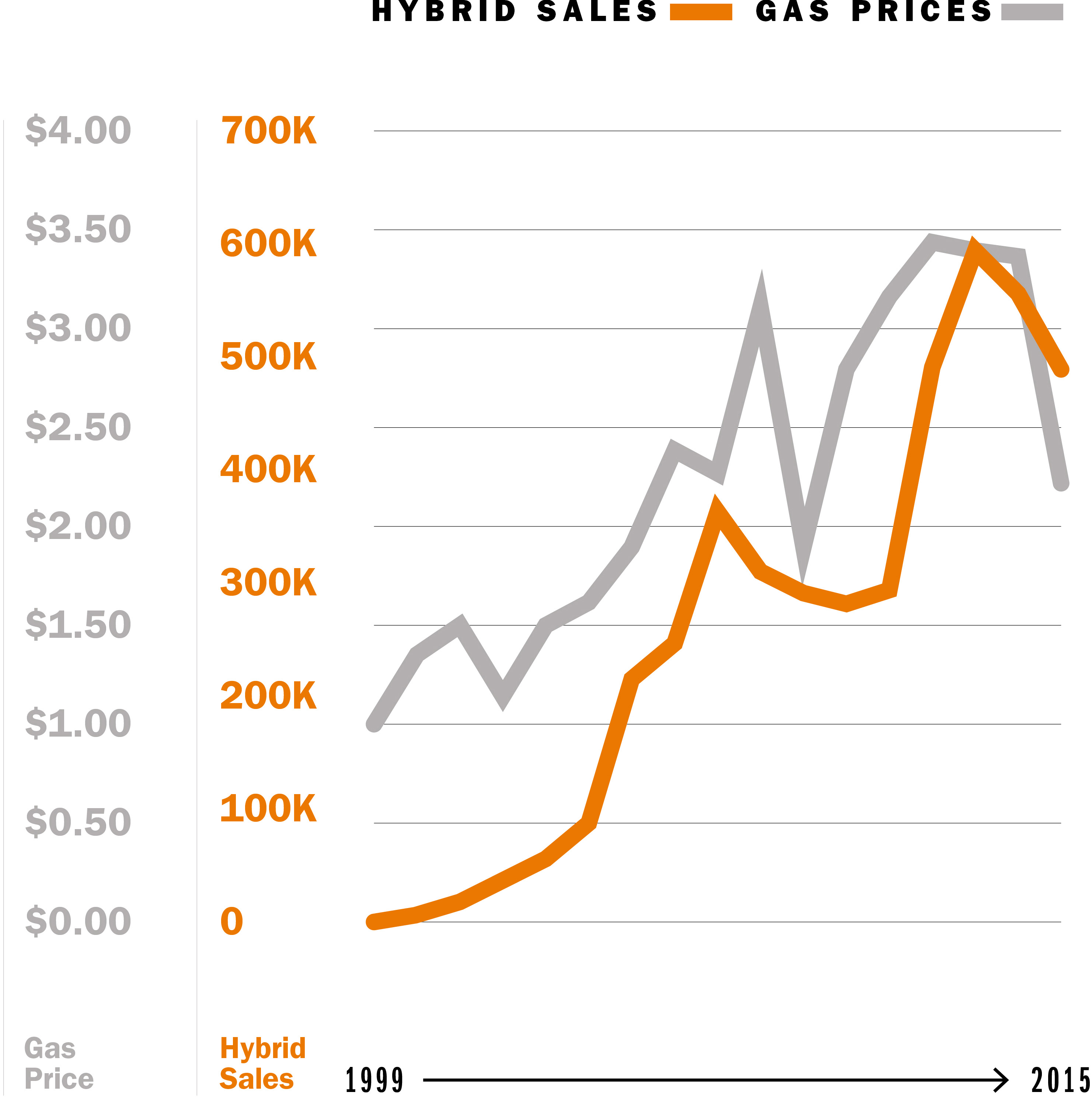 Lenox said an "era of ferment," which is characterized by design experimentation, typically precedes a true market disruption.

"What it creates is a ferment of ideas that you need to push that technology curve."

Sales of electric vehicles are just 1 percent worldwide today, but the volume is growing quickly. That figure could climb to 50 to 70 percent of sales by 2040. 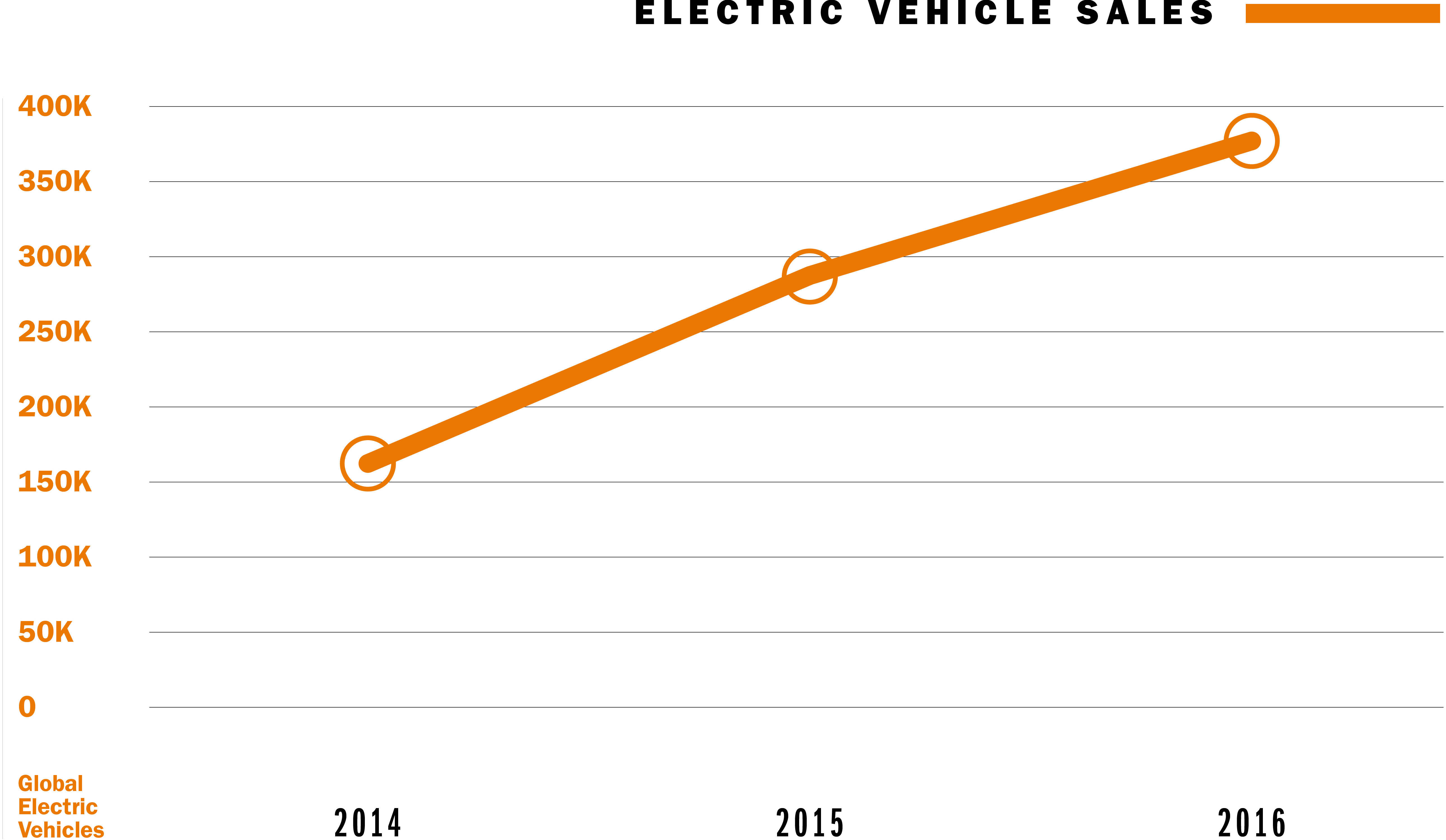 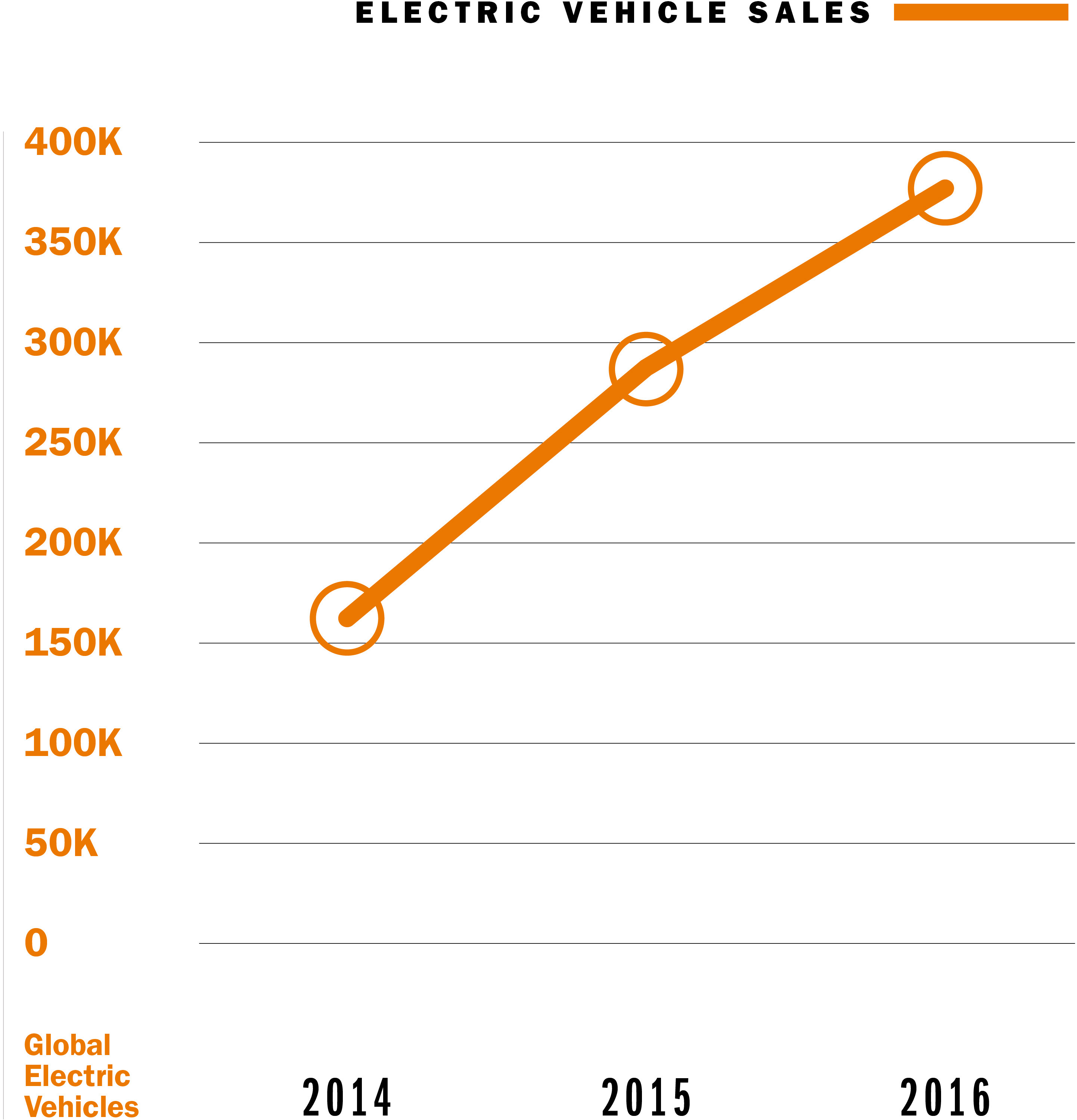 As an example, he cited the Rio - one of the first MP3 digital music players to hit the market in the late 1990s. After Diamond Multimedia brought the Rio to market, hundreds of others - including Microsoft, Dell and Sony - came out with their own versions.

"One of the things we know when we look at disruption within different industries over time is that when new technology emerges, there's often massive entry into that segment," Lenox said.

Ultimately, that competition experienced a shakeout and Apple emerged with a market leader in its iPod device.

"What's lost in a lot of people's memories is that the Apple iPod was a fairly late entrant into this burgeoning industry," Lenox said. "Everyone thinks they were the first one, but they were years later than the first MP3 player."

"What Apple did was they figured out the dominant design that really resonated with the marketplace and then quickly took over the market," Lenox said. "A lot of the other players disappeared."

Several years later, the same thing happened with smartphones when Apple's iPhone ran competitors Blackberry and Nokia out of business. Today, Lenox said, there is a similar "boom-bust dynamic" taking place in the auto industry.

"We're seeing it from not only the new entrants - like the Teslas of the world - but we're seeing the incumbent firms diversify into this in a big way."

When buying the electric vehicle is no longer the expensive option, but the cheaper option – the market will just naturally adopt that.

One finding that surprised Lenox and Batten Institute lead researcher Rebecca Duff was the sheer number of Chinese manufacturers that have placed "big bets" on electric cars.

"Here in America, we've never heard of them, but they have global aspirations - so coming to a market near you could be some of these Chinese brands," said Lenox, who compared a potential influx to that of Japanese car manufacturers in the U.S. in the early 1970s.

Lenox said the economics of electric cars will, no doubt, play a large role in how soon they become fully integrated. History shows that early adopters will pay a premium to access the latest technologies, but success in the mass market occurs only after the price comes down. "When buying the electric vehicle is no longer the expensive option, but the cheaper option - the market will just naturally adopt that," he said.

The rate of change from gasoline to electric will be affected by a host of other issues and uncertainties as well. Will governments provide incentives that boost demand for the vehicles by lowering their net price to consumers? Will charging stations for battery-powered electric vehicles or other emission-free technologies come on line fast enough to support high volumes?

Plenty of questions remain, and with an ambitious target such as 2060, plenty of doubts come with them. Zero-emission vehicle sales make up just 1 percent of new-vehicle sales today. At the same time, innovation doesn't stand still.

In 2000, Toyota sold 5,500 Prius models. By 2005, the figure had climbed to 100,000 annually in the United States. Today, global Prius sales have surpassed 3.5 million, and the Batten Institute report concludes that hybrid gas/electric vehicles have effectively created a bridge from gasoline-only to fully electric vehicles.

Will fully electric vehicles experience a similar growth curve? In 2016, Tesla's more affordable Model 3 arrived to market with a waiting list of more than 400,000 customers, according to the report. Volvo, meanwhile, announced plans to discontinue sales of gasoline-only new vehicles in 2019.

As electric vehicle sales continue to grow and prices decline, their market share will increase steadily. Darden researchers say a full shift to electric could happen by 2060, but is not guaranteed. 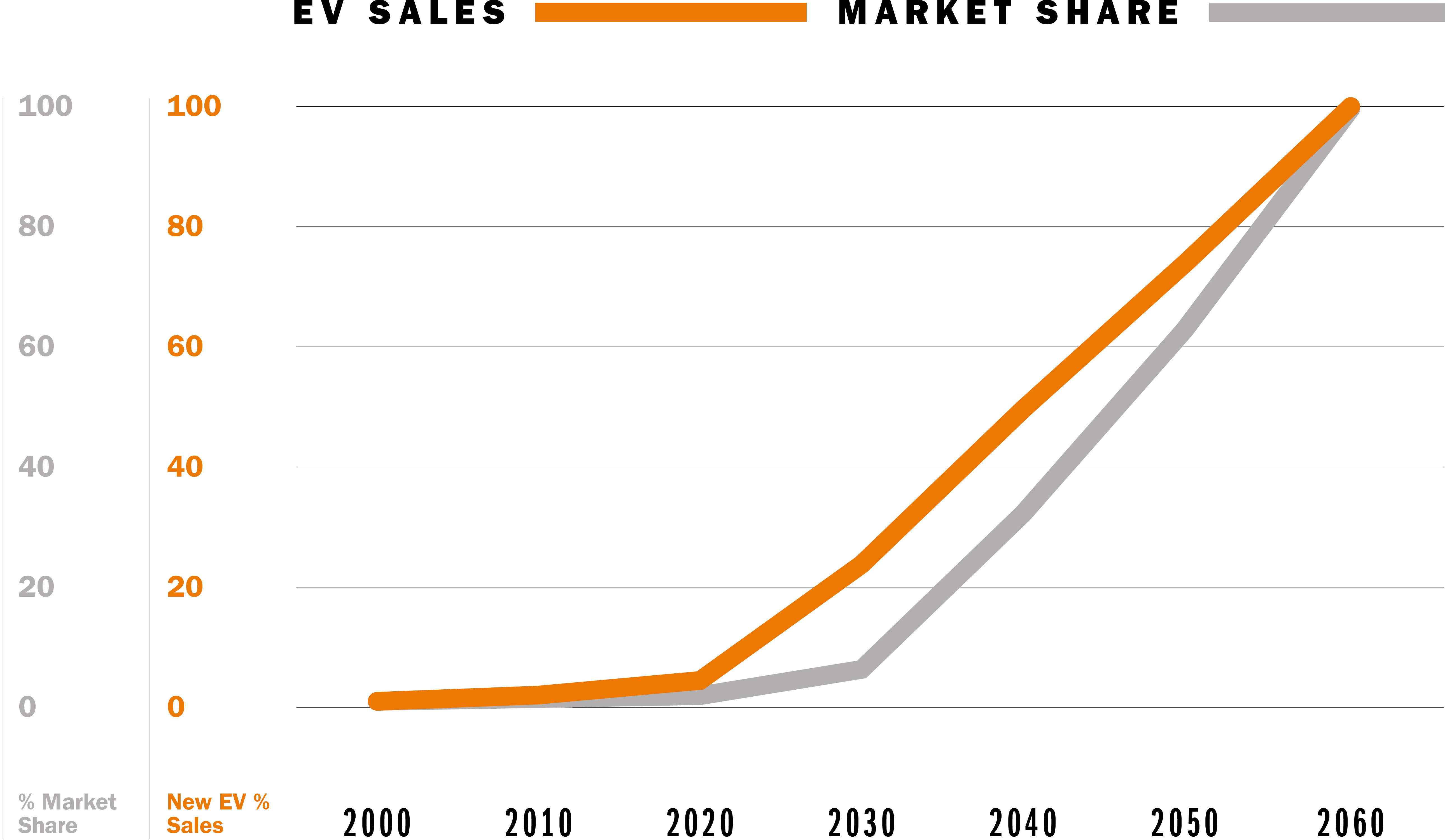 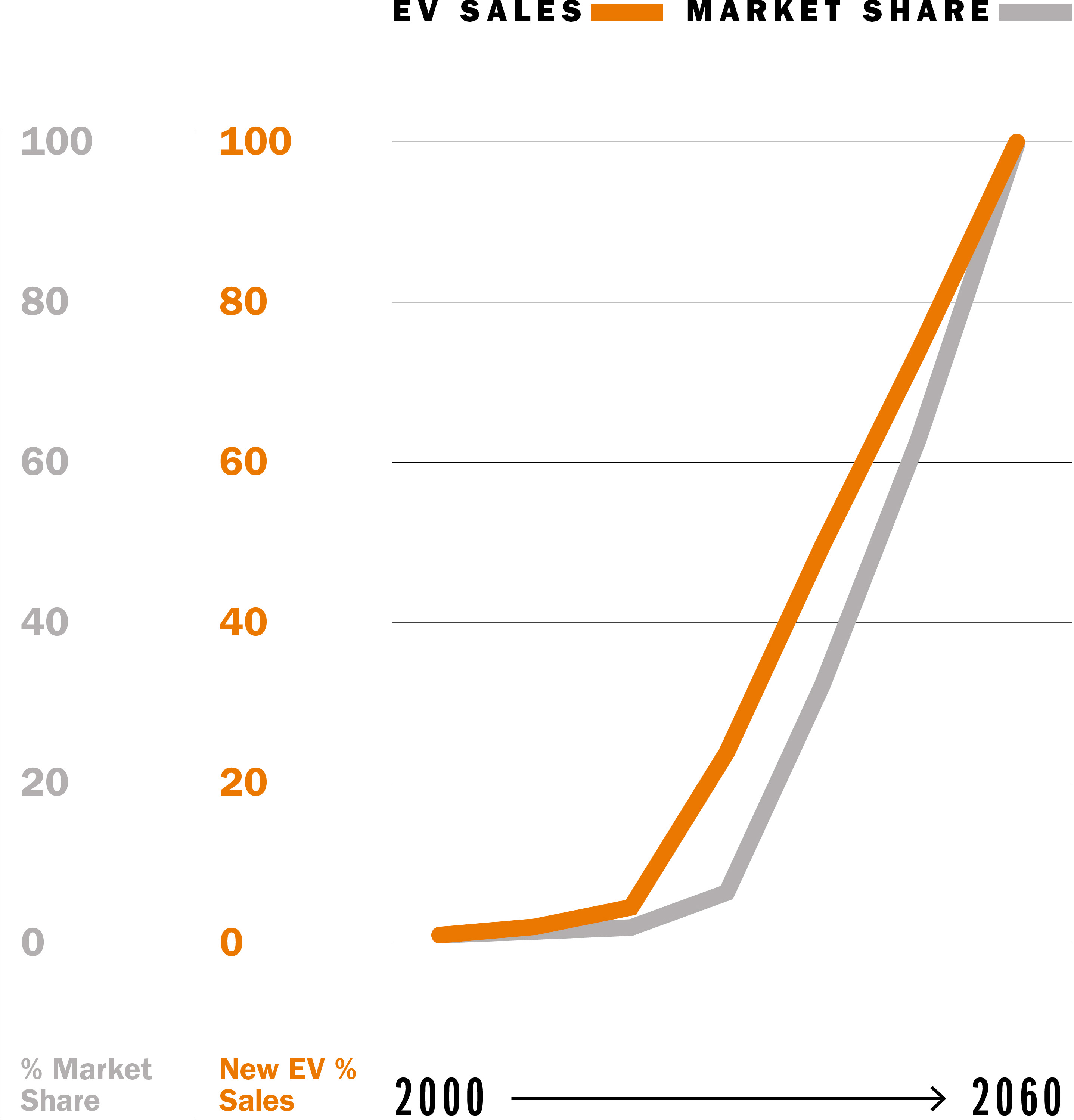 "This is happening quicker than people think," Duff said. "Battery electric cars are reaching a tipping point in terms of cost-competitiveness." According to the report, industry analysts predict cost parity with gasoline-powered cars by 2025. "The sales and projections are looking very favorable - even without federal support. I don't think the average consumer truly understands the speed of adoption. They still see electric vehicles as a novelty."

"As I like to say, disruption always seems like it's never quite here - until it is," he said. "And then it seems to come pretty quickly."