10 Years of ‘Love is Love’ at UVA: See How This Valentine’s Day Tradition Began 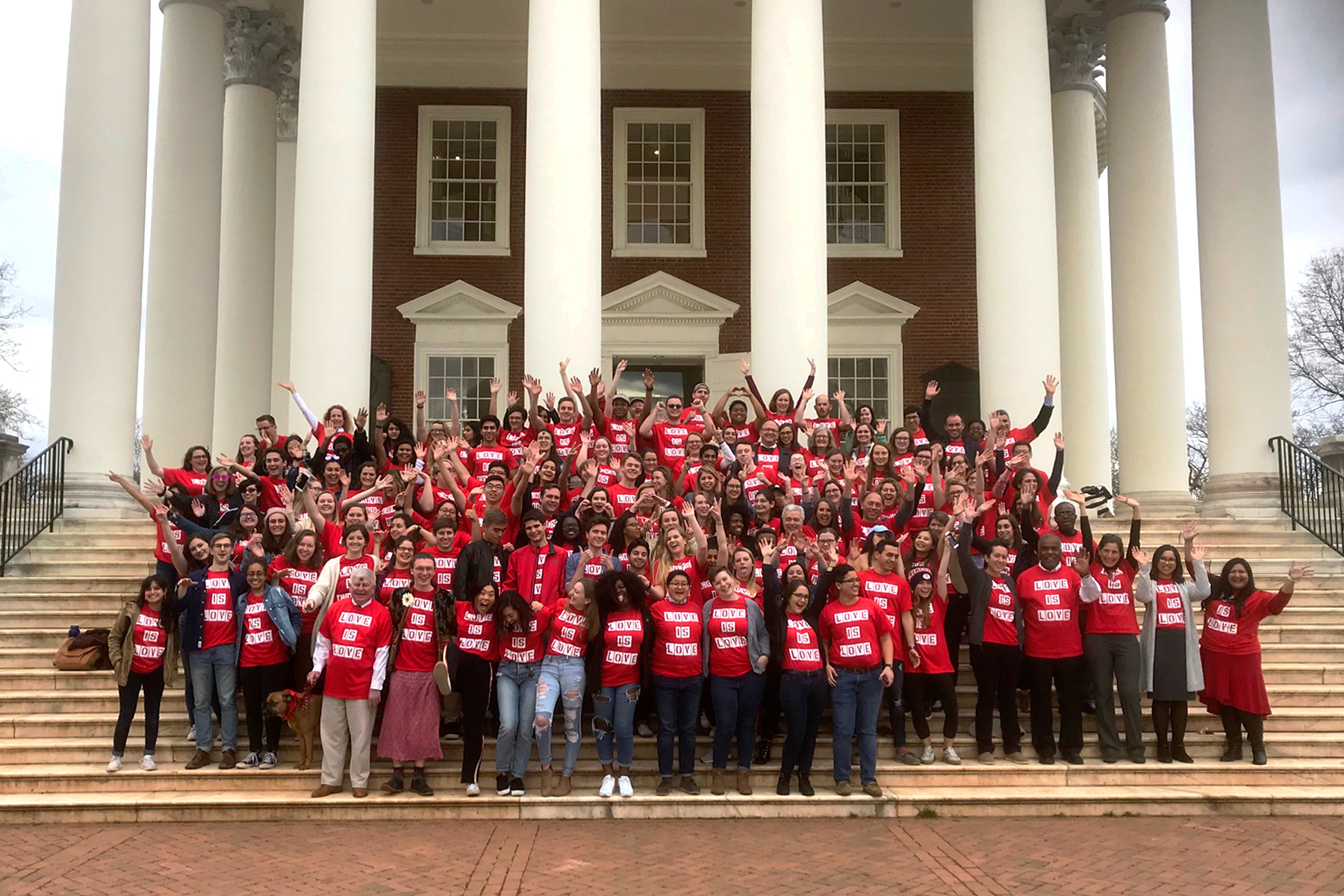 Ten years ago, a group of University of Virginia students and administrators came together around Valentine’s Day to send a simple message of support to LGBTQ students.

The phrase stems from a national movement for LGBTQ rights and has grown in usage and recognition over the past decade, especially around the 2015 U.S. Supreme Court ruling in favor of same-sex marriage.

“We wanted to make a broad statement that would recognize those communities, include many different identities and mean a lot to a lot of people,” said Ed Warwick, who in 2009 was coordinator of student services at UVA’s LGBTQ Center. 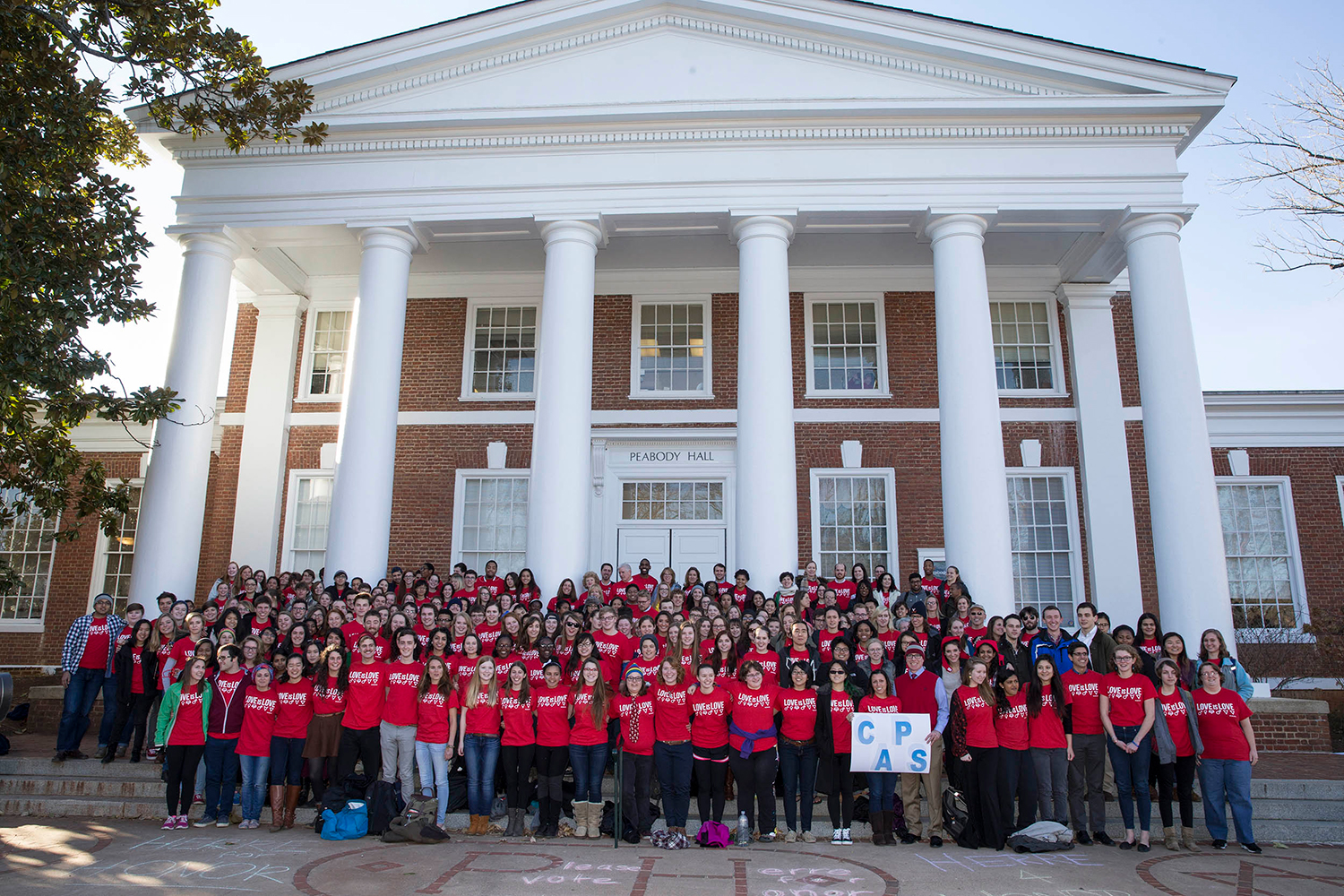 Working with local company Blue Ridge Graphics, Warwick and several students designed simple, bold T-shirts – red with white lettering – and asked students to wear them on Valentine’s Day. They hoped the shirts would encourage students to take additional steps, such as visiting the LGBTQ Center, attending programs, events or training sessions to support LGBTQ peers, or simply having conversations with friends.

“We wanted to meet people where they were, while also pushing boundaries a little bit,” Warwick said.

The shirts arrived in Warwick’s office a few days before Feb. 14, quickly flying out the door and into the hands of several hundred students and community members eager to show their support.

“They were gone within hours,” he recalled.

They might not have known it then, but Warwick and his students started a UVA tradition that, 10 years later, is still going strong.

On Thursday, students will once again celebrate Valentine’s Day by donning T-shirts and gathering at 4 p.m. for what has become an annual photo on the Rotunda steps, followed by a rousing rendition of “The Good Old Song.” Past years have seen hundreds of students show up, along with faculty and administrators. 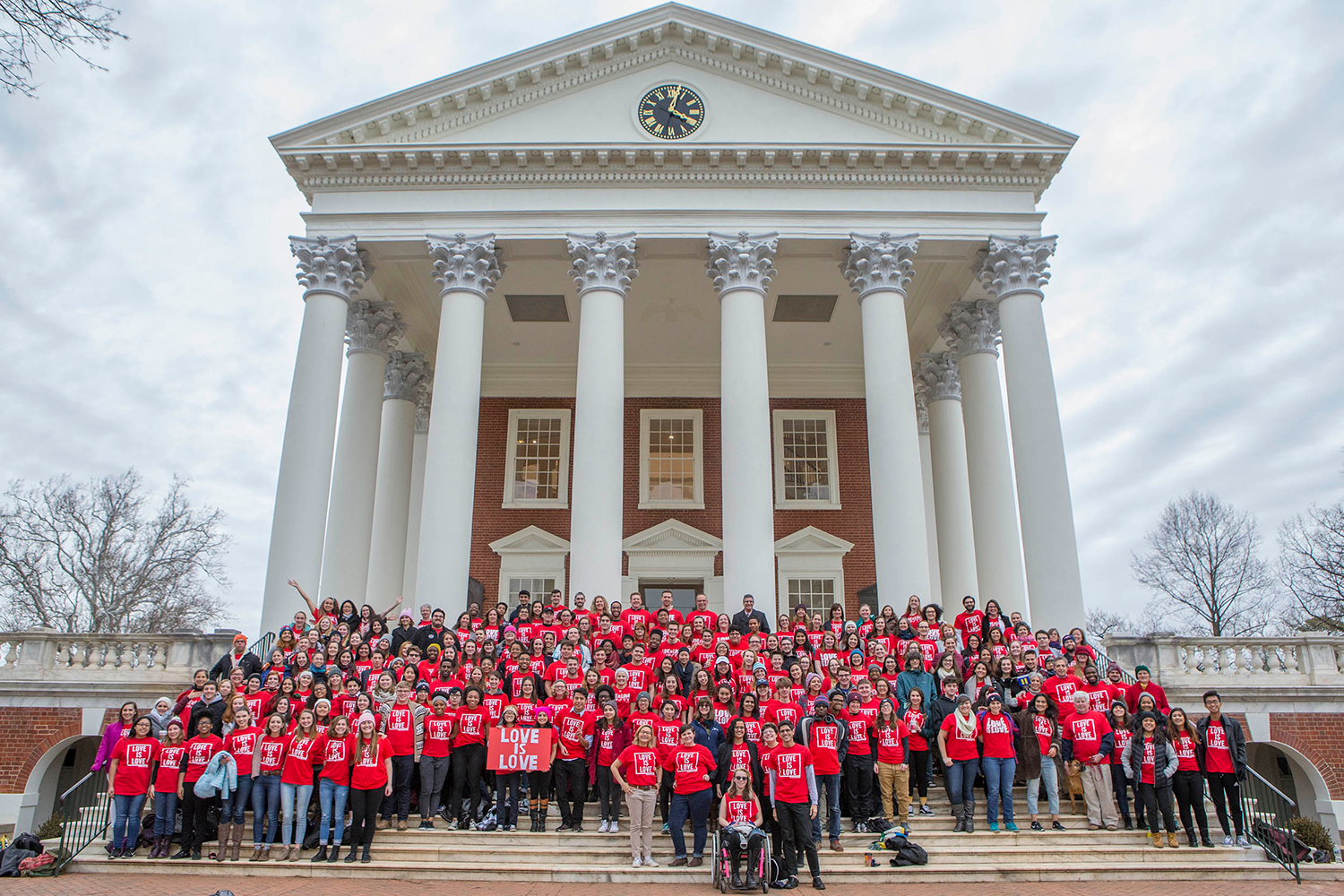 The 2017 event drew a large crowd at the Rotunda. (Photo by Sanjay Suchak, University Communications)

This year’s shirts have a slightly different twist, proclaiming, “Love is …” and encouraging students to fill in the blank with their own definition.

“We wanted to continue the spirit of ‘Love is Love,’ which is now such an important phrase in our nation’s history and in UVA’s history,” second-year student organizer Blair Smith said. “However, we also wanted to spark dialogue about the complexity of love and to include communities that might feel overlooked, such as those who identify as transgender, asexual or aromantic.”

Smith, who is one of several student interns working at the LGBTQ Center, hopes this year’s event will encourage students to think and talk about many definitions of love.

“Love isn’t always what you see on most Valentine’s Day greeting cards,” he said. “It’s been neat to see people go beyond the superficiality of the holiday and think deeply about love, what it means and the importance not just of romantic love, but of loving our communities and loving ourselves.”

Chad Kamen, a third-year student working as the LGBTQ Center historian, noted that this year’s shirts mark a continued shift to more inclusive messaging, going back to a 2005 T-shirt campaign, “Gay? Fine by Me” that preceded the “Love is Love” campaign started in 2009.

“It has been a constant journey to get at the hardest concept of all: articulating in one phrase what love is,” he said. “This year’s shirts allude to a long tradition here of trying to get the most inclusive, brave and nuanced take on what love is.” 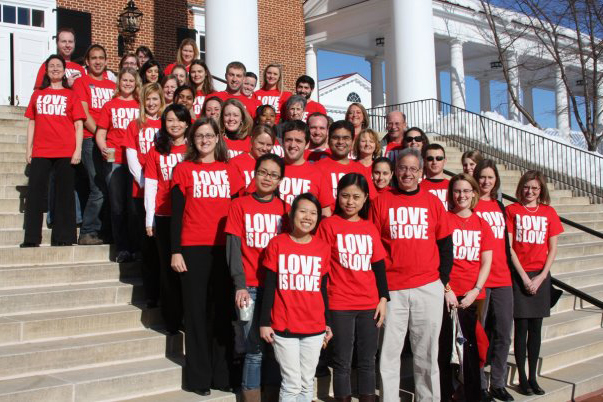 Students at the Darden School of Business wearing &quot;Love is Love&quot; shirts during 2010, the second year of the campaign. (Contributed photo)

Kamen is working on an upcoming May exhibition about the history of LGBTQ communities on Grounds, and has already conducted several interviews with alumni, faculty and staff about their experiences at UVA.

“Watching people tell the story of this University, and see themselves in it, has been one of the most groundbreaking things I have been able to experience secondhand,” he said. “There is something very healing about that.”

Warwick, now the associate director of student affairs at UVA’s Darden School of Business, said he has enjoyed watching both the LGBTQ Center and the original “Love is Love” idea evolve.

“Even that first year, the idea was not met with universal approval. Some students did not think it was a strong enough statement, while others felt it was appropriate to reach a broad group of people,” he said. “It’s been great to see students take the idea and run with it.”

He noted that recognition of the LGBTQ community has changed substantially since 2009, especially with the legality of same-sex marriage and growing conversations around transgender rights.

“Just 10 years ago, things were very different for the LGBTQ community, and many of the conversations we are having now were simply not happening,” Warwick said.

Now, in addition to the event at the Rotunda, many schools and other groups host similar events on and around Valentine’s Day. The Darden community, for example, has been celebrating “Love is Love” all week with T-shirts, events and a drag performance.

Every project, from the big photo at the Rotunda to Kamen’s historical work to the many events hosted throughout the year by the LGBTQ Center, aims to send one universal message, encapsulated by Smith:

“All people should know that they are loved and can love freely.”

When Less Is More: How Harnessing the Power of Subtraction Can Add to Life END_OF_DOCUMENT_TOKEN_TO_BE_REPLACED