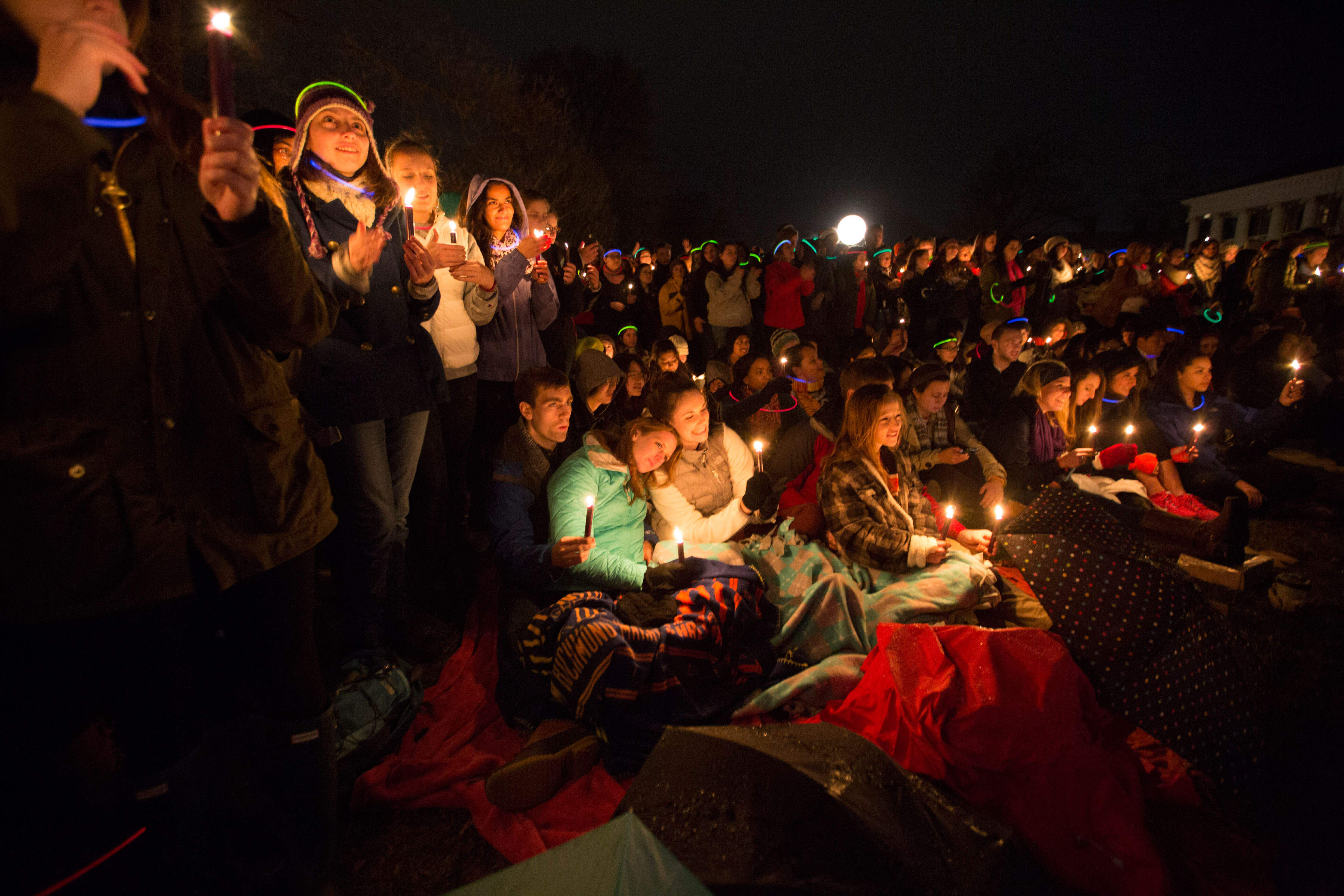 James Wu stood smiling on the Lawn at the University of Virginia on Thursday night, surrounded by throngs of happy students and community members gathered for the 14th annual Lighting of the Lawn ­– his last as an undergraduate student.

“You come here, and you just forget about all the schoolwork and the finals that are coming up and just enjoy the moment,” said the fourth-year chemical engineering major. “Everyone’s just here hanging out, eating and drinking hot chocolate. It’s happy.” 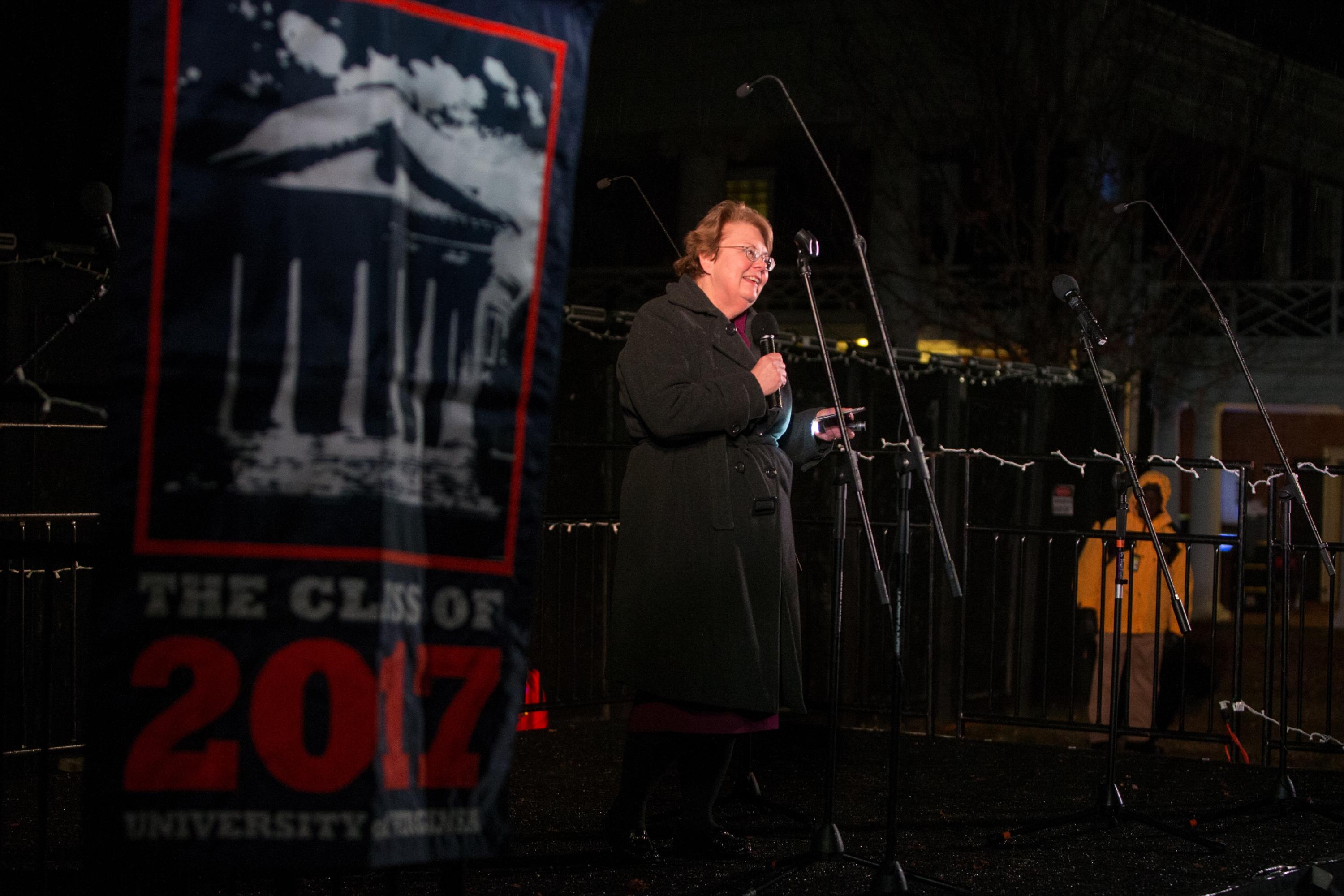 Amid the colder weather, the end of fall semester classes and the onslaught of final projects and examinations, students have taken time out for the past 14 years to celebrate the start of the holidays and the community they call home. This was a more somber event than in years past, geared toward recognizing the challenges that have faced the University and the nation in the past few months. Organizers said the night was meant to unite and celebrate the people who make up the University.

Lighting of the Lawn began in the wake of the Sept. 11, 2001, terror attacks, when Facilities Management employees first strung thousands of lights along the University’s Academical Village, then called the University community together to flip the switch. The event quickly became an annual holiday tradition, with music, food, drink, speeches and the reading of a holiday-themed poem recapping the past year.

Despite Thursday’s brief bouts of rain, the ringing harmonies of U.Va.’s a capella groups, from Hoos in Treble’s rendition of “Have Yourself a Merry Little Christmas” to the Academical Village People’s “I Wanna Dance With Somebody,” kept spirits high.

“The Lighting of the Lawn shines a bright light in the darkness,” said U.Va. President Teresa Sullivan, whose address the to the crowd kicked off the evening. “We want to do the same thing in our University community, in a sprit of self-examination and to seek the truth, and we hope our national leaders will shine a light into every dark corner where unjust violence occurs. … Now more than ever, it’s time for us to look out and care for each other.”

Addresses with similar messages from student representatives interspersed the performances from 20 University choral and a capella groups.

Fourth-year student Will Cadigan, who co-chairs the U.Va. Sexual Violence Prevention Coalition, read a letter from the A.N.G.E.L.S. Society that encouraged the community, declaring “To stand together is the only way to stand.” 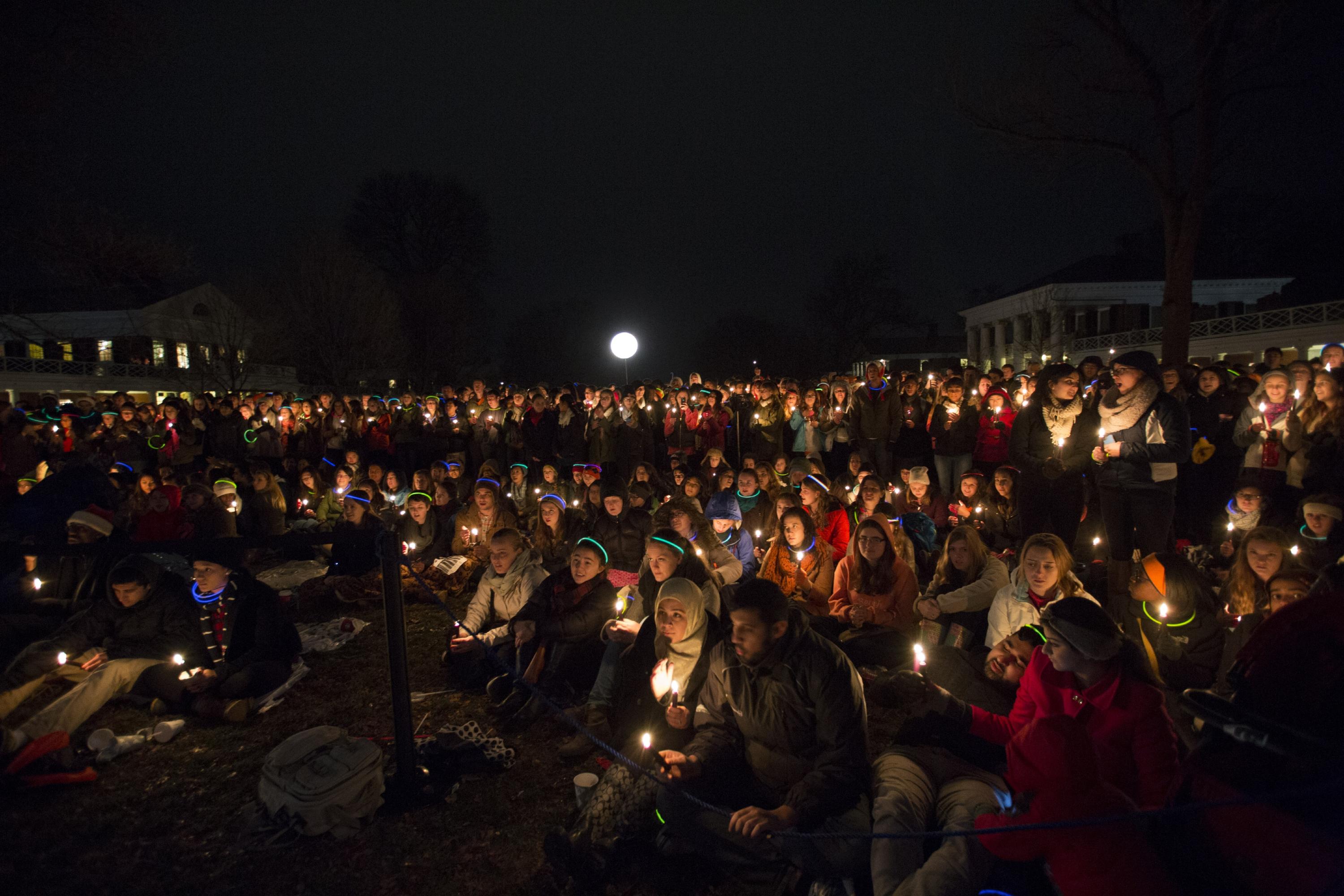 For the first time, purple candles were distributed among the crowd from the Society of Purple Shadows, lit to represent both remembrance and hope. Class of 2015 president Will Laverack read the society’s message: “Aristotle reminds us it is during are darkest moments we must focus to see the light. Tonight make true these words. … We make the light shine bright. And together, only together, we will make it shine bright for all days and nights to come.”

Students also passed out "#HOOSGotYourBack" pins to performers and guests as a reminder to the community to look out for one another. The initiative works to raise awareness about being an active bystander to prevent sexual violence on Grounds.

Quang Pham, president of the Engineering Student Council and a fourth-year mechanical engineering major, was busy running a reception for his fellow engineering students in Pavilion VIII. “It’s just a great way for people to come together, this whole thing, and here, the whole engineering community coming together. Even our professors were invited to come,” he said.

“It goes to being able to come together as a community, and the Lighting of the Lawn uniting us, giving us a sense of strength and power in that we’re all in this together. It’s very optimistic here.” 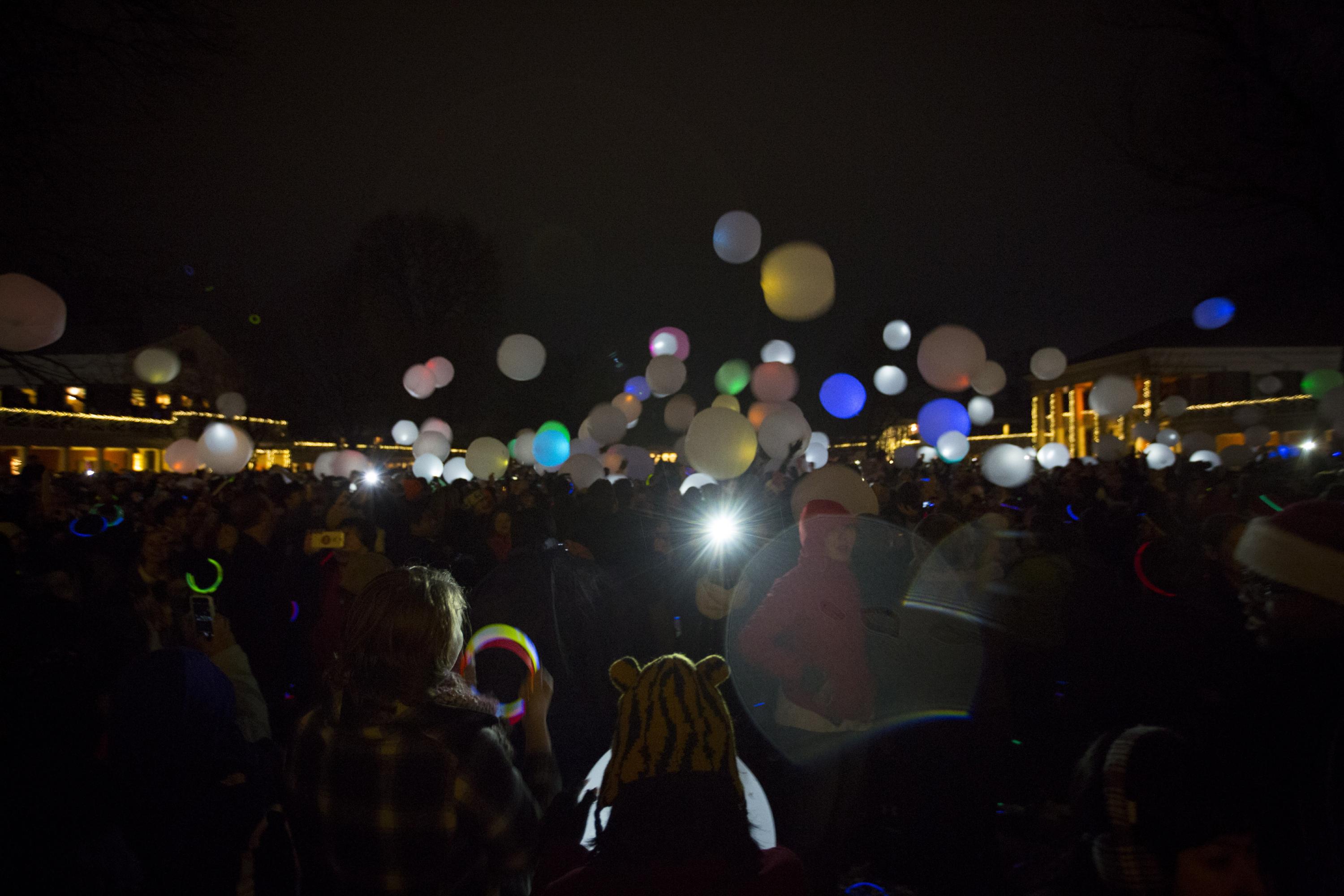 As the students began lighting their candles, the fourth-year members of a capella groups led the crowd in a rendition of “Lean on Me.” U.Va. economics professor Lee Coppock and McIntire School of Commerce Dean Carl Zeithaml read the humorous annual class poem, “’Twas the Night Before Finals.”

The Cavalier Marching Band came to the stage to perform the ‘Good Ol’ Song’ and led a countdown to the main event: the illumination of more than 4,000 feet of lights swirling the Rotunda columns and outlining the perimeter of the lawn.

As a light show – engineered under the leadership of fourth-year student Kevin Seitter – got under way, students waved glow sticks and tossed around giant color orbs.

“I like Lighting of the Lawn because it’s a really nice break from the stress of finals, and it’s also really nice break from all that’s been happening at the University and nationwide recently,” said Sam Wolo, a fourth-year computer science major who enjoyed the festivities with her first-year sister. “It’s fun to share it with her. There’s tons of free food, and compared to how stressed out everyone’s been recently, it’s a really nice celebration.”

When Less Is More: How Harnessing the Power of Subtraction Can Add to Life END_OF_DOCUMENT_TOKEN_TO_BE_REPLACED