14th Annual ‘Lighting of the Lawn’ to Unite University Community 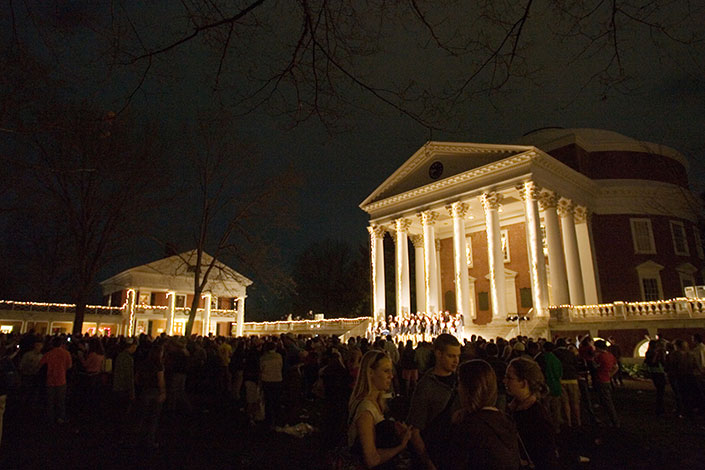 Peering over the construction fences at the University of Virginia’s Rotunda, it’s hard for those who have spent their holidays on the Academical Village to imagine how Thursday’s 14th annual Lighting of the Lawn will compare to those of years past.

Fourth-Year Trustees Stephanie Fuschetti and Madeline Smith said that this year’s event won’t just compare – it will surpass them. The events begin at 7 p.m.

With the ongoing Rotunda renovations, just where the lighting will occur has left many students guessing. Smith and Fuschetti have only encouraged the anticipation with the “Lighting of the ‘question mark’” marketing campaign.

Yet even with the construction, students, administration and faculty were determined to maintain a tradition that has served as a uniting factor in the University community for more than a decade.

“[The construction contractors] are being wonderful and letting us work with them,” Smith said.

Surprises for everyone in attendance will include new activities and production adaptations.

While the LED lights themselves won’t look any different than the traditional look that students are accustomed to, there was a change in the means of hanging the lights. This year, students, in conjunction with Facilities Management, hung the lights along the pavilions that outline the Lawn, setting what Fuschetti and Smith hope becomes a continued tradition. Kevin Seitter, a student from the School of Engineering and Applied Science, led the effort.

“[Students] were involved in every aspect,” Smith said.

“We’ve continued to step it up. There will be surprises for everyone there in terms of the production,” Fuschetti said. “We took advantage of dealing with the ‘broken canvas’ that is the Rotunda and added extra elements for excitement that will keep people on the edge of their seats.”

Adding to the planning hurdles, the committee has been challenged with uniting the University community in a time of need.

Students established the event in 2001 as a way to bring the community together during the difficult time following the Sept. 11 terrorist attacks. This year’s event again will provide a forum for the University community to unite in another difficult time. The University has lost three students during recent months, and now also is working to find answers and solutions following a magazine report that depicted a disturbing sexual assault of a student at a fraternity house in 2012.

“Lighting of the Lawn has always been such an important event to this community; it’s a time to bring us all together and show our unity,” Fuschetti said. “Now more than ever this event is an important reminder to everyone of the strength of this community and the hope that we have for the future. Recent events have shown us the need to stay together and work toward the best place that the University can be. The focus of this event is still respectful, but also has a joyous tone in light of reminding us all how strong we are.”

With an anticipated 7,000 attendees, organizers have endeavored to provide something for everyone. More than 20 a cappella groups will perform; nearly all pavilion residents will host private receptions; Lawn room residents have invited their organizations; and hot chocolate and cookies provided by U.Va. Catering Services will be available for all at the center of the Lawn.

Vice President and Chief Student Affairs Officer Patricia Lampkin will host a reception for fourth-year students in Pavilion V. Students are encouraged to arrive at 5:30 p.m. for entry at 6 p.m.

“Fourth-years should attend, not only because it’s their final Lighting of the Lawn and because it’s on the list of 115 things to do before you graduate, but because we have surprises in store for them specifically,” Smith said.

A crowd favorite, of course, is the annual reading of a seasonal poem, specifically written as a reflection of the year past. Each year’s poem is written by two fourth-years from ideas submitted by a committee of first- through fourth-year students, with a section dedicated to each class. Aaron Ojalvo and Caelan Fortes wrote this year’s poem.

“For fourth-years, the poem is a light-hearted way to reflect on everything we’ve been through in the past four years – from the earthquake on our first day of college to Hurricane Sandy, when nothing happened,” Smith and Fuschetti said.

In the spirit of change, this year the traditional moment of silence has been replaced with an engaging activity that will be revealed that night.

“In past years we’ve had a moment of silence, which has been difficult to get students to partake in because it’s a huge event,” Smith said. “This year we’re going to try to incorporate a much more engaging activity in lieu of the moment of silence, something that will bring everyone together, but all keeping with the tone of respect and camaraderie.”

In the spirit of the season, Lighting of the Lawn will also give back to the community. This year’s philanthropic beneficiary is Charlottesville’s Camp Holiday Trails, which provides traditional camp experiences for children with chronic illnesses.

In partnership with the First-Year Leadership Experience, the first-year dorm association donating the most to Camp Holiday Trails will have its own private reception in Pavilion VIII.

“Even though the fourth-years are hosting this, the event is such a University-wide [celebration] that we really want to incorporate each class,” Smith said. “The positivity of this event couldn’t be more paramount.”

Lighting of the Lawn is made possible through donations from the Parents Committee, the Office of the Vice President of Student Affairs, the Honor Committee, University Programs Council, College Council, Fourth-Year Trustees, Third-Year Council, Second-Year Council, First-Year Council, Inter-Sorority Council, the School of Medicine’s Mulholland Society and the International Relations Organization at U.Va.

What Is the ‘4th Side’? END_OF_DOCUMENT_TOKEN_TO_BE_REPLACED