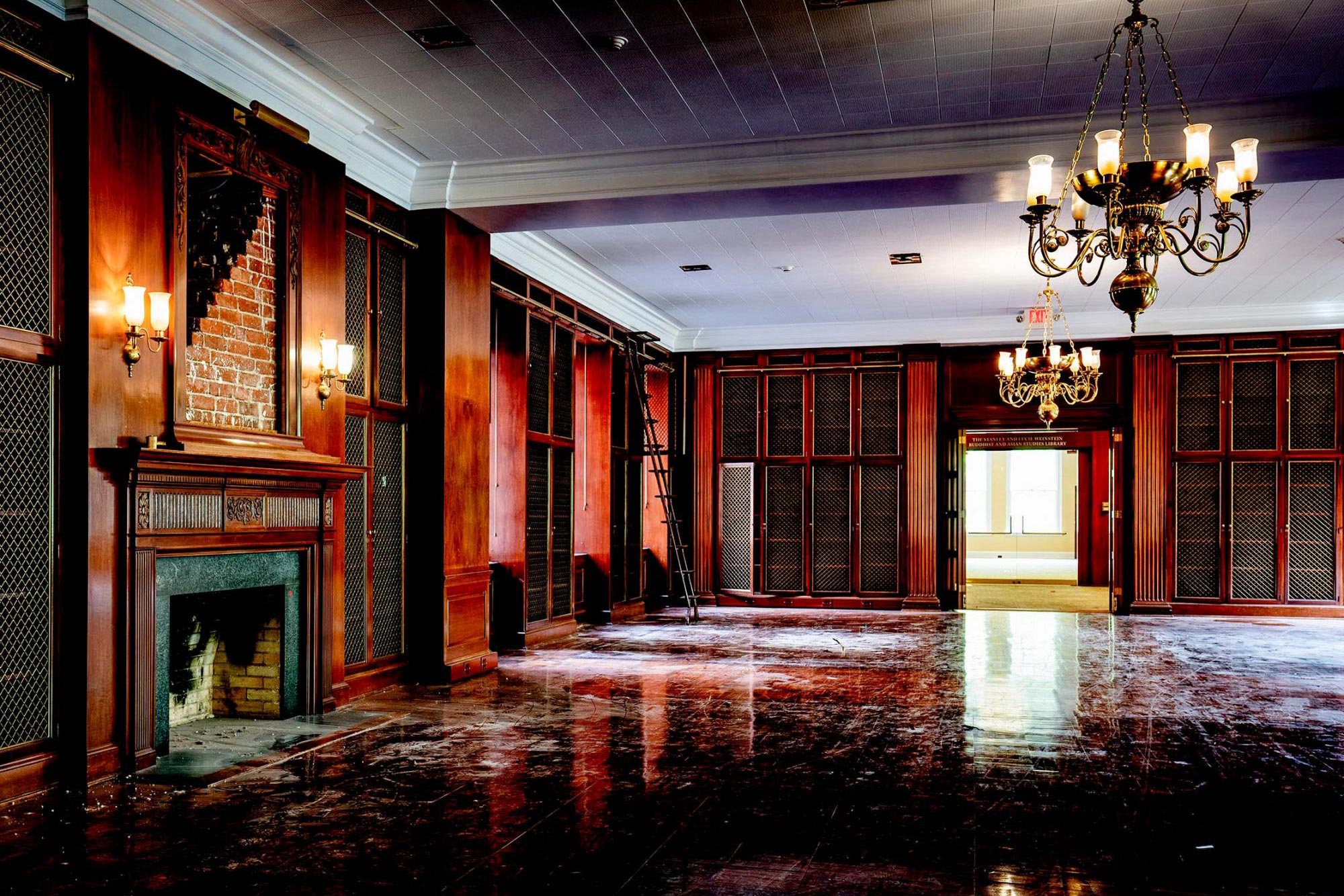 The McGregor Room, a popular study spot on Grounds, will be restored on the second floor of Alderman Library, where it has always been. (Photo by Sanjay Suchak, University Communications)

The University of Virginia Library announced a $2 million commitment from Marjorie Harrison Webb that will provide unrestricted support for the library’s mission during and after the extensive renovation currently underway at Alderman Library.

Webb, along with her daughter Marjorie Webb Childress, who is a 2001 graduate of the College of Arts & Sciences and 2009 graduate of the Darden School of Business, are co-chairs of the library’s fundraising campaign.

Webb’s gift reflects a remarkable family tradition of giving to the University. Her father, the late David A. Harrison III, was a lawyer, investment banker and farmer who earned his bachelor’s degree from the University in 1939 and his law degree in 1941. Harrison and his wife, Mary Anderson, were among the most generous donors to UVA, directing their giving to many areas across the University – including the schools of Law and Medicine, the College and Graduate School of Arts & Sciences and the University Library – during their lifetimes.

“With this commitment for the library, Marjorie extends her parents’ extraordinary legacy of service and dedication to the University,” UVA President Jim Ryan said. “Her gift is a critical investment in high-quality scholarship, teaching and learning at UVA, and will benefit future generations of faculty and students. I am deeply grateful for her generosity.”

Private support for the library’s mission provides resources to further teaching, research and study as well as renovating space in Alderman. The overhaul will fix many of the problems plaguing the building, including safety, navigability and comfort issues, and marks the library’s third chapter in the University’s history.

The first chapter began when the Rotunda, UVA’s first library, was constructed as the focus of the Academical Village – a notable departure from the customary practice of centering universities around religious buildings. The second chapter began with the opening in 1938 of Alderman, to replace the Rotunda as the main library, with a much larger and more current collection, and UVA began to function as a research university.

Now, a third chapter is opening with a transformation that will provide the University with the library it needs for the next 100 years. 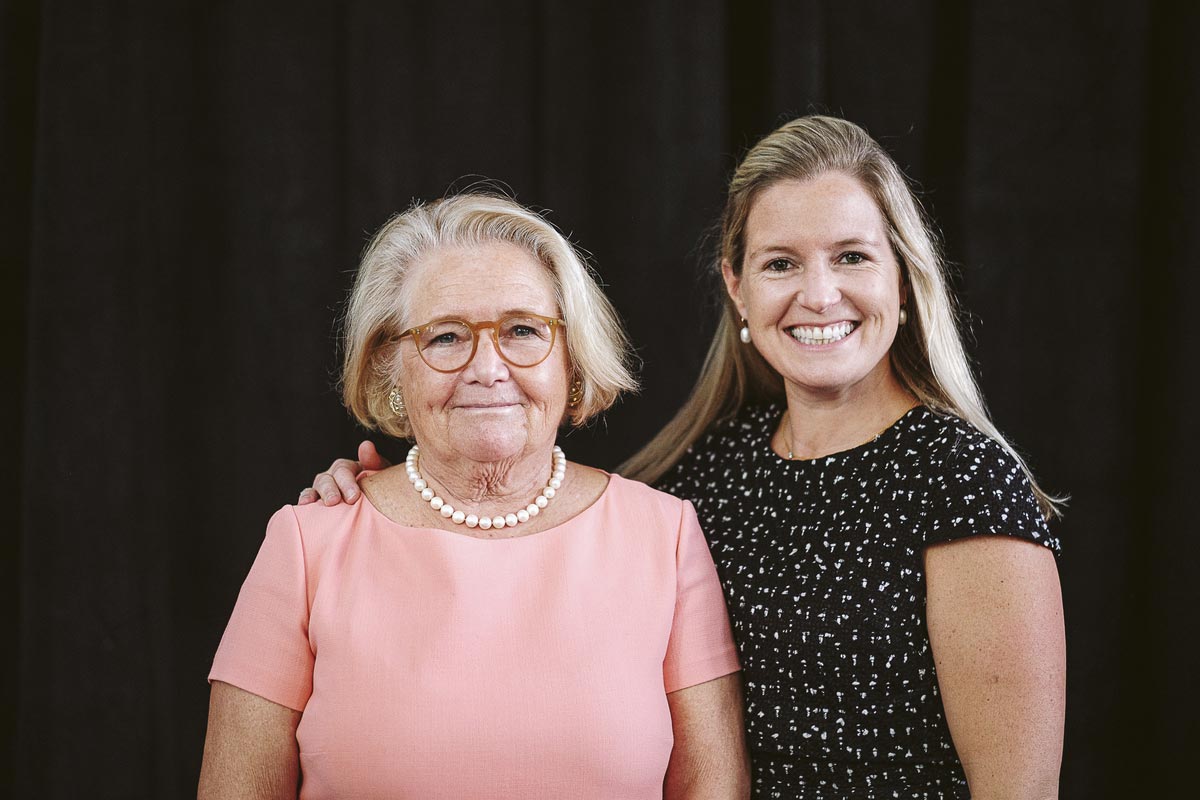 Marjorie Harrison Webb, left, and her daughter Marjorie Webb Childress, an alumna of the College and Darden, are co-chairs of the library’s fundraising campaign. (Contributed photo)

“Through their generosity and volunteer leadership, Marjorie and her daughter, Marjorie, have played a pivotal role in writing the next chapter for UVA Library,” University Librarian John Unsworth said. “I am personally grateful for Marjorie and Marjorie’s service as co-chairs of the Library’s Campaign Committee. The library owes a debt of gratitude to the entire Harrison family for their philanthropic leadership at the library through the years.”

Webb has three children – all graduates of the University and all with their personal favorite studying spots in Alderman, Clemons and the Fine Arts Library. Marjorie Webb Childress served as chair for both her undergraduate and Darden 10th-year reunions and serves on the Richmond regional interview committee for the Jefferson Scholars Foundation board for undergraduate and Darden applicants. Alexandra Webb Clark, a 2003 graduate of the College of Arts & Sciences, also volunteers for the Jefferson Scholars Foundation. Peter Webb is a 2007 graduate of the College and a 2019 alumnus of the Darden School of Business’s Executive MBA program.

The Harrison Family Foundation was established in 1993 and became the Harrison Foundation in 2008. As president of the foundation, Webb and her siblings continue to direct a portion of David Harrison’s estate funds to support the University and other areas of interest within education, health and human services nationwide. The foundation has already given $2 million toward the Flowerdew Hundred Collection as part of the library’s fundraising campaign.

“Great libraries build great communities, and with 10 libraries on Grounds, our UVA community is strong and growing stronger,” Webb said. She noted an observation made by broadcast journalist Walter Cronkite in 1995, for the American Library Association’s “Libraries Change Lives” campaign, who said, “Whatever the cost of our libraries, the price is cheap compared to that of an ignorant nation.”

Mary and David Harrison’s giving has supported a wide range of professorships, scholarships and buildings at the University, including a gift to the library in the last campaign to create the Mary and David Harrison Institute of American History, Literature and Culture. In addition, the Harrison Foundation provided most of the funding for the Harrison-Wood Professorship in Neurology at the Jefferson Scholars Foundation, created the Harrison Undergraduate Research Awards in the College of Arts & Sciences, and created the David and Mary Harrison Distinguished Professorships of Law in the School of Law. Harrison Field at Scott Stadium and the Law School grounds are also named for David A. Harrison III.

Alderman Library was closed in the spring semester of 2020, and the renovation of the building has begun in earnest. The historical areas of the library will be refurbished and renewed, and new construction will create bright, open interiors and a welcoming environment for study, research and reading – as well as the library’s extensive print collections. The new library, scheduled to open by spring of 2023, will welcome the University community, visiting scholars and citizens of the commonwealth into a much better environment for visitors and collections.

No tuition dollars are being used to fund the renovation; the budget will come solely from a combination of state funds and private donations from alumni and friends. Learn more about supporting the renovation at library.virginia.edu/renovation.