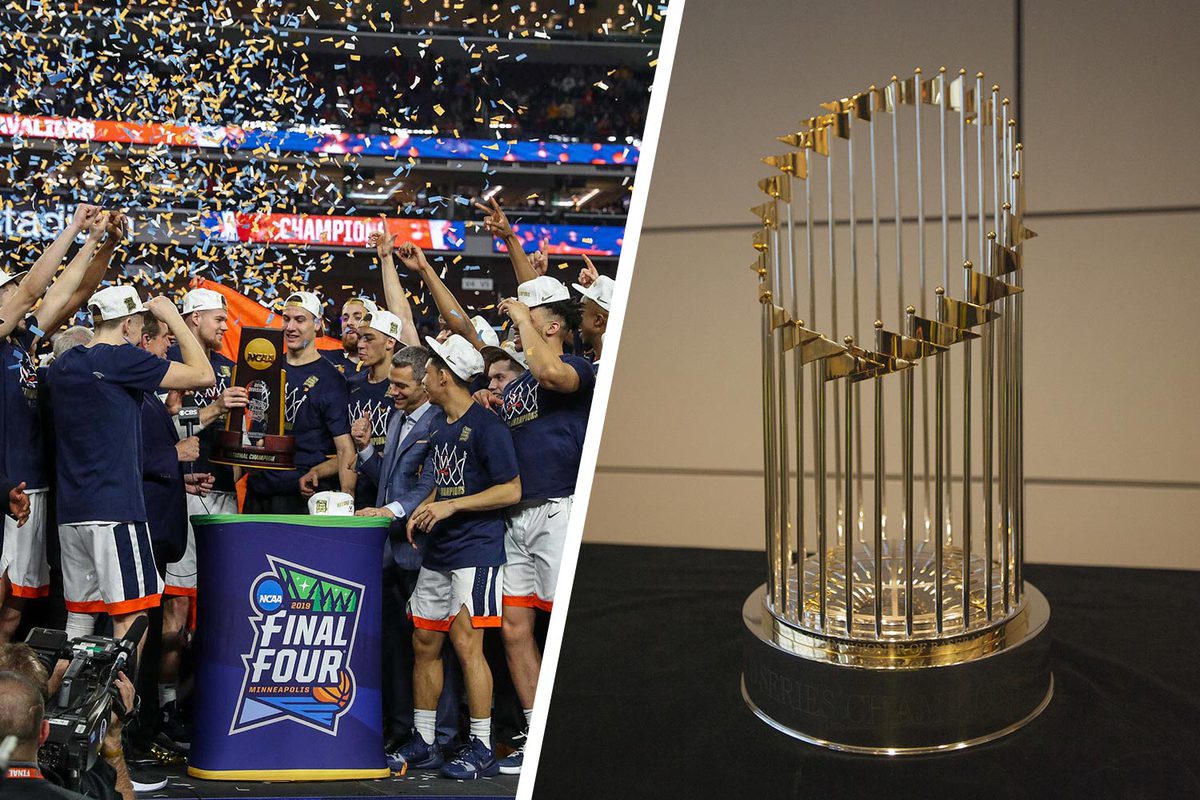 For a certain subset of Washington Nationals fans, there was a definite sense that they had been through all of this before: the years of disappointment, late nights spent watching games through their fingers, agonizingly close calls and, ultimately, never-say-die triumph on the biggest stage the sport has to offer.

Yes, it had all happened before. Just as October is hallowed in baseball circles, March is college basketball’s holy month. For many Nationals fans, this was all a new feeling; for those who cheered the University of Virginia men’s basketball team to its first national championship just seven months ago, it was a joyous sequel.

Yes, each of the titles was definitely a unique experience. But there were some interesting links between the Cavaliers’ journey to an NCAA championship and the Nats’ quest – with two Hoos playing key roles – for their first World Series rings.

Both teams put their supporters through an emotional wringer, and the Cavs and the Nats each had multiple moments when even their staunchest fans had to have doubted their chances.

The Nationals endured five games in which they faced elimination from the postseason. They fell behind in all five of them before coming back to win.

But that only scratches the surface. According to a win-probability measure published by BaseballGauge.com, Washington’s chances of beating the Milwaukee Brewers in the National League Wild-Card Game had dwindled to just 13% as they headed into the bottom of the eighth inning, trailing 3-1.

A week later, the Nats’ chances of winning the National League Division Series fell to just 11% as they trailed the Los Angeles Dodgers, also 3-1, midway through the seventh inning of the decisive Game 5 in Dodger Stadium.

The World Series itself was a roller coaster. Oddsmakers installed the Houston Astros as overwhelming favorites. After Washington won the first two games in Houston, they headed back to Nationals Park with an 83% chance to win the series. When the Astros then swept the three games in the nation’s capital, the Nats’ chances to win the series fell to just 22%.

Of course, the Washington Nationals overcome all of those odds and hoisted the championship trophy early Thursday morning.

Months earlier, the Cavaliers frequently found themselves on the wrong side of a similar win probability measure calculated by ESPN as they made their way through the NCAA Tournament. 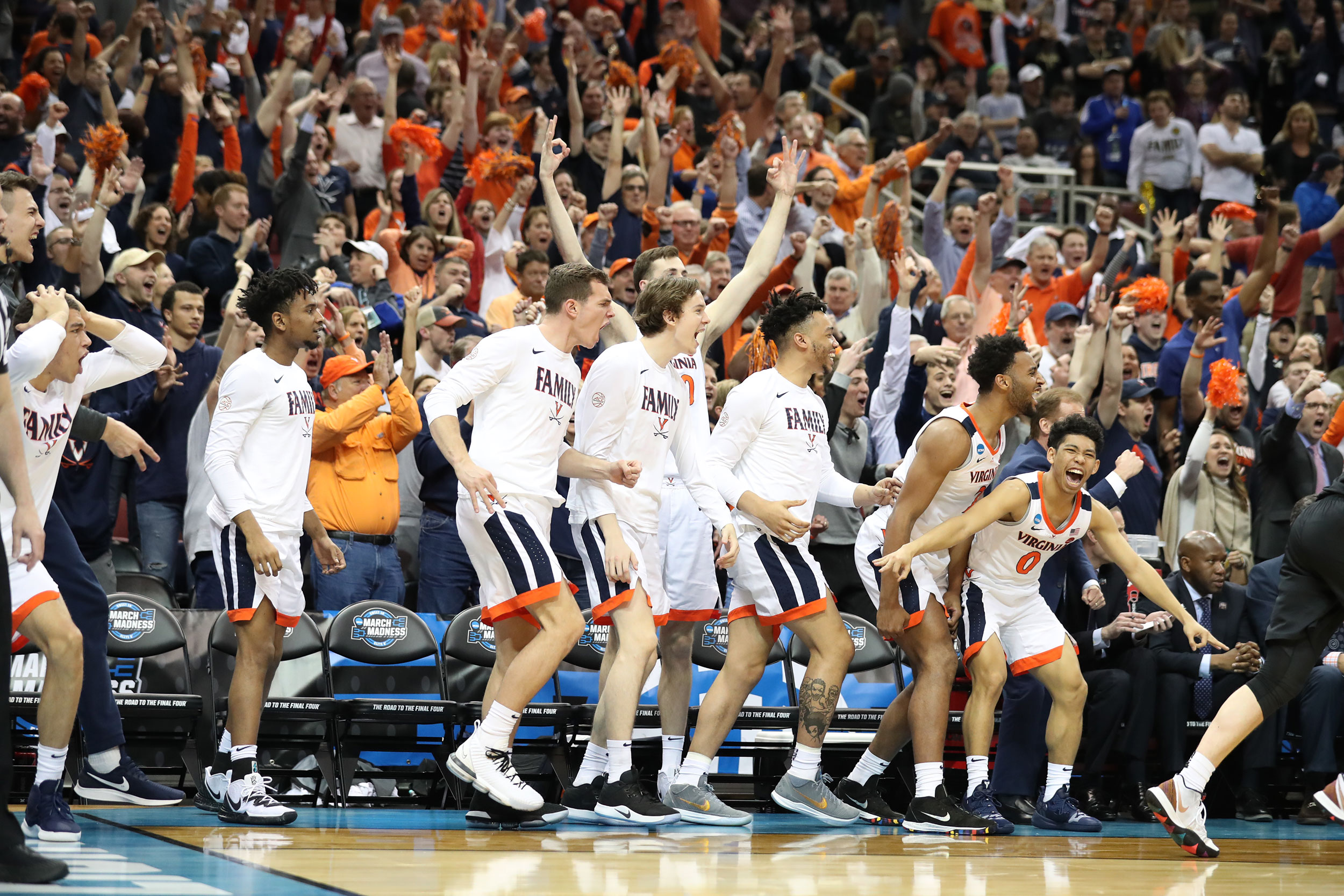 In each of its last four games, UVA had less than a 40% chance of winning at some point in the second half. Against the University of Oregon in the Sweet 16, they were down to 39.7%. Against Purdue University in the South Region final, they were down to 9%. Against Auburn University in the national semifinal, the odds of winning dwindled to just 7% right before Kyle Guy hit three free throws to win it. And in the final against Texas Tech University, the Hoos had just a 24.4% chance of winning before forcing the game into overtime.

Despite all of that, the trophy resides in Charlottesville.

Far from being out-of-nowhere underdogs, the Nationals and Cavaliers were both powerhouse teams whose regular-season excellence had gone unvalidated in the anything-can-happen postseason.

The Nats, who moved from Montreal to D.C. in 2005, had won the National League East in 2012, 2014 and 2017, and at least in ’12 and ’17, arrived in the postseason among the teams most favored to win the World Series. In all three seasons, they fell in the best-of-five National League Division Series, including agonizing defeats in decisive Game 5s in front of the home fans in 2012 and 2017. In 2018, the Nationals didn’t even make the playoffs, despite being many experts’ preseason picks to reach the World Series.

Fortunately, hope springs eternal – and 2019 brought sweet relief for Nationals fans and UVA fans, who flooded John Paul Jones Arena and the streets of Charlottesville after the title win.

Both championships ran somewhat counter to the prevailing trends in their respective sports.

Traditional college basketball powerhouses like Duke University and the University of Kentucky have increasingly cast their lots with so-called “one-and-done” players – uber-talented freshmen who play one year of college ball only to satisfy the NBA’s requirement that they be at least one year removed from high school before entering the NBA draft. (Think of Duke’s Zion Williamson, the No. 1 overall selection in the 2018 NBA draft, as the latest exemplar.)

By contrast, UVA’s championship team was built upon a system that demands patience and teamwork built over years, not weeks. The Cavaliers relied on many players with at least three years in the system, including DeAndre Hunter, Kyle Guy, Ty Jerome, Jack Salt and Mamadi Diakite. In dire situations in March, that trust and familiarity made a big difference.

Similarly, Major League Baseball teams are increasingly built upon mathematical models that favor less-expensive younger players over higher-priced veterans; many of the latter languished for months on the free-agent markets in the last offseason, waiting in vain for offers to play. The Nationals’ World Series opponents, the Astros, chose to go through a horrendous series of losing seasons in the early 2010s in order to accumulate the high draft picks who eventually became the core of their 2019 juggernaut, which won 107 regular-season games.

The Nationals certainly built a young core through the draft, but their 25-man World Series roster included 17 players who were age 30 or older, including 42-year-old relief pitcher Fernando Rodney, the oldest player in the majors and veteran Howie Kendrick, who hit a crucial homerun in Game 7.

Crucially, UVA and the Nationals paired their veteran leaders with precocious youngsters in a pivotal roles.

The Nats’ cleanup hitter, left fielder Juan Soto, turned 21 during the World Series. After a regular season in which he batted .282 with 34 home runs and 110 RBI, he led the Nationals in the World Series with three home runs while going 9-for-27 at the plate and driving in seven.

His analogue with UVA was freshman point guard Kihei Clark, whose defensive tenacity and steady ballhandling earned him a starting position during the regular season. He ended up starting 20 games, with 97 assists against 39 turnovers. It was Clark’s hustle that sparked arguably the most memorable play in UVA basketball history; as the final seconds of the South Region final against Purdue counted down, he chased down a long rebound in the backcourt and whipped a pass to Diakite, whose buzzer-beating jumper sent the game into overtime and merely saved UVA’s season.

There’s an old saying in sports that persists mostly because it’s inarguably true: You can’t win if you can’t score. Or more simply, defense wins championships.

The Nationals built their team around dominant starting pitching, with much of their payroll going to their “three aces” – Max Scherzer, Stephen Strasburg and Patrick Corbin. All three came up big in the postseason, with Strasburg named as the World Series’ Most Valuable Player. In their 12 postseason victories, the Nationals allowed just 26 runs.

UVA has built its identity under head coach Tony Bennett on its “pack-line” defense, a relentless form of man-to-man defense that emphasizes helping one another out on the court and denying opponents easy shots. The 2018-19 Cavaliers led the nation in scoring defense on their way to yet another No. 1 seed, and then held their first three NCAA Tournament opponents to 56, 51 and 49 points, respectively. Those totals rose slightly as they began to face stronger opponents in the later rounds, but defense still played a major role in their victories.

Cavaliers on the Roster

It certainly did not hurt the Nationals that they had two former Cavaliers playing key roles. First baseman Ryan Zimmerman, the Nationals’ first-ever draft pick back in 2005, started all seven games in the World Series. Former Hoo Sean Doolittle was one of the few relief pitchers that Nationals manager Dave Martinez trusted in the postseason, making several important appearances while not giving up a run in the World Series.

Mr. National, you are a #CHAMP. pic.twitter.com/i0Oubk69qm

June 14 might have been a significant date in the Nats’ season. That was “University of Virginia Night” at Nationals Park; the Cavalier men’s basketball team was the invited guest, and the NCAA Championship trophy made its way into the Nationals’ locker room, where Zimmerman and Doolittle posed for pictures with it.

The Nationals went on to beat the Arizona Diamondbacks that night, 7-3.

Was some UVA good karma involved? We like to think so.

What it Means to Be a Cavalier Baseball Player END_OF_DOCUMENT_TOKEN_TO_BE_REPLACED