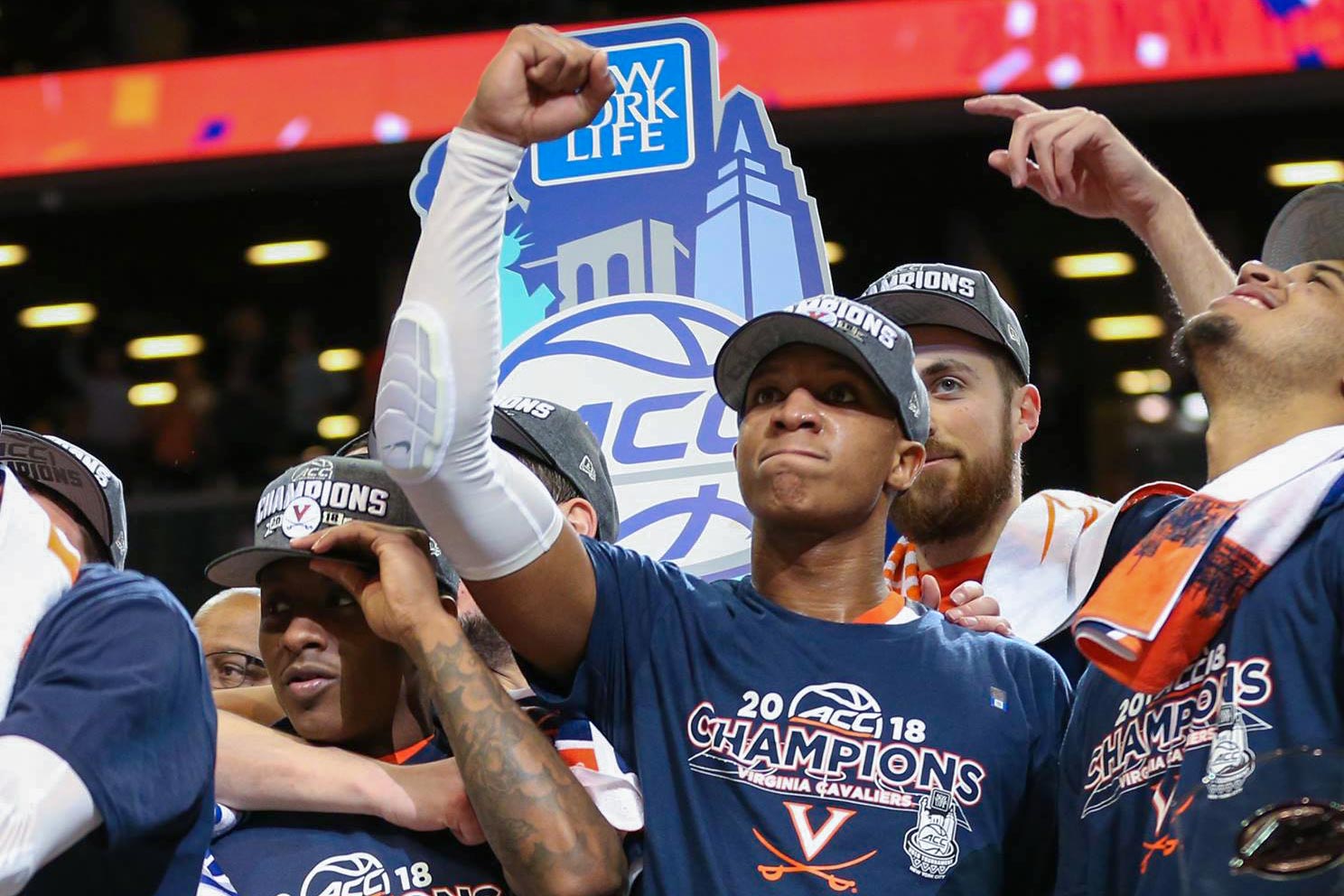 “It’s not coming off,” said a smiling Johnson, on the back of whose cap was tied the strand of net he’d cut down at Barclays Center.

As satisfying as their latest ACC crown was for the Cavaliers, though, they have bigger goals this season. The NCAA tournament awaits them.

As expected, the top-ranked Wahoos were awarded the No. 1 overall seed in the NCAA Tournament Sunday night, and they’ll start play at the regional in Charlotte, North Carolina.

“You always like it when your fan base can come,” head coach Tony Bennett said of the regional site, which UVA had requested. “Those things all matter. We’ve been in Raleigh a few times and been in Charlotte. It’s nice to be able to hopefully have great support there.”

The ’Hoos are in the NCAAs for the fifth straight year and sixth time in seven seasons. Senior forward Isaiah Wilkins, one of UVA’s captains, said he’s learned one overriding lesson in his first three trips to the tournament.

“Be ready to play,” Wilkins said Saturday night after Virginia’s win over North Carolina. “Everybody can play. After a while, the regular season and all that stuff doesn’t matter.”

The key, Bennett said Sunday night, as he has repeatedly this season, is “not to overcomplicate it. You just prepare well, improve, and then when you get to the game, you play to win. You always acknowledge at this level [that] anybody can beat anybody and you can beat anybody.”

The ACC championship game ended around 10:30 p.m. Saturday in Brooklyn. It was early Sunday when the Cavaliers returned to their hotel in Manhattan, where hundreds of jubilant fans were waiting in the lobby to welcome them.

Outside John Paul Jones Arena, a similar scene greeted the ’Hoos, who swept the ACC’s regular-season and tournament titles, when the team arrived home Sunday afternoon.

A few hours later, the Cavaliers gathered at a local restaurant to watch the selection show on TBS. Carla Williams, Virginia’s new athletics director, attended the celebration with her two daughters.

“It’s a wonderful feeling, because I have so much respect for Coach Bennett and his staff and the way that he runs his program,” said Williams, a former basketball player and coach who came to UVA in early December from the University of Georgia, where she was deputy AD.

“So just being able to be a part of this – the No. 1 team in the country, the overall No. 1 seed – it’s pretty phenomenal. I know that they’re ready to get down to business and go out and play, and we’re looking forward to supporting them.”

The ’Hoos will open against a team coming off a stunning victory. In the America East final Saturday night, graduate student Jairus Lyles hit a long 3-pointer with six-tenths of a second left to lift UMBC to a 65-62 win over host and top-seeded Vermont.

“Everybody’s capable in this tournament,” Bennett said. “That’s just how it is.”

Lyles, a 6-foot-2 guard, began his college career at Virginia Commonwealth University. At UMBC, he plays for head coach Ryan Odom, one of Dave Odom’s sons. The elder Odom, a former UVA assistant, later was head coach at Wake Forest University and then the University of South Carolina.

“He comes from a great coaching family,” Bennett said of Ryan Odom, who’s in his second year with the Retrievers.

Ryan Odom came to UMBC from the University of North Carolina-Charlotte, where his fellow assistant coaches included Orlando Vandross. Vandross is now the Cavaliers’ director of recruiting and player development.

Virginia leads the group of nine ACC teams that made the NCAA tournament, the most of any conference. Two other ACC teams – Louisville and Notre Dame – received serious consideration from the NCAA selection committee.

“It was a really high-quality league this year,” said Bennett, who’s in his ninth season at UVA. “The conference tournament showed that, and hopefully it’s really prepared us for what we’re about to venture into.”

“It was awesome,” she said. “I’m a huge basketball fan anyway, so being able to watch some really good basketball was a lot of fun. Obviously, whenever you win it all, it makes it even more fun.”

In New York, Williams not only met several former UVA men’s basketball players, including Justin Anderson, who attended the championship, but she spent time with such former UVA football players as Chris Long, Chris Canty and Kevin Ogletree.

“It was a great experience,” Williams said.

In its three-day run at Barclays Center, Virginia defeated No. 9 seed University of Louisville in the quarterfinals, No. 4 seed Clemson University in the semifinals and No. 6 seed University of North Carolina-Chapel Hill in the championship game to capture the tournament for the third time in program history (and second time under Bennett.)

“Different guys at different times,” Bennett said of the Cavaliers’ formula for success in Brooklyn. “It was kind of a microcosm of our whole season, if you think about it.”

“Everybody was needed,” Bennett said, “and everybody stepped up.”

During the regular season, Virginia became the first team in ACC history to win 17 league games. The ’Hoos secured the regular-season title with three games to play, but no letdown followed.

“Our coaching staff did a great job of not letting us lose our way,” Jerome said in Brooklyn. “And now it’s easy. If you lose, you’re done, so it’s super easy to stay in the moment, stay focused. No one wants to go home.”

The coaches do their part, but Bennett credited the leadership of the Cavaliers’ captains.

“Coach-led teams can be good,” Bennett said in New York. “Player-led teams have a chance to be really good, and that’s what we have here.”

A Year We Will Never Forget: 2019-20 in Review END_OF_DOCUMENT_TOKEN_TO_BE_REPLACED

‘What Will You Carry With You?’ Remarks From UVA President Jim Ryan END_OF_DOCUMENT_TOKEN_TO_BE_REPLACED