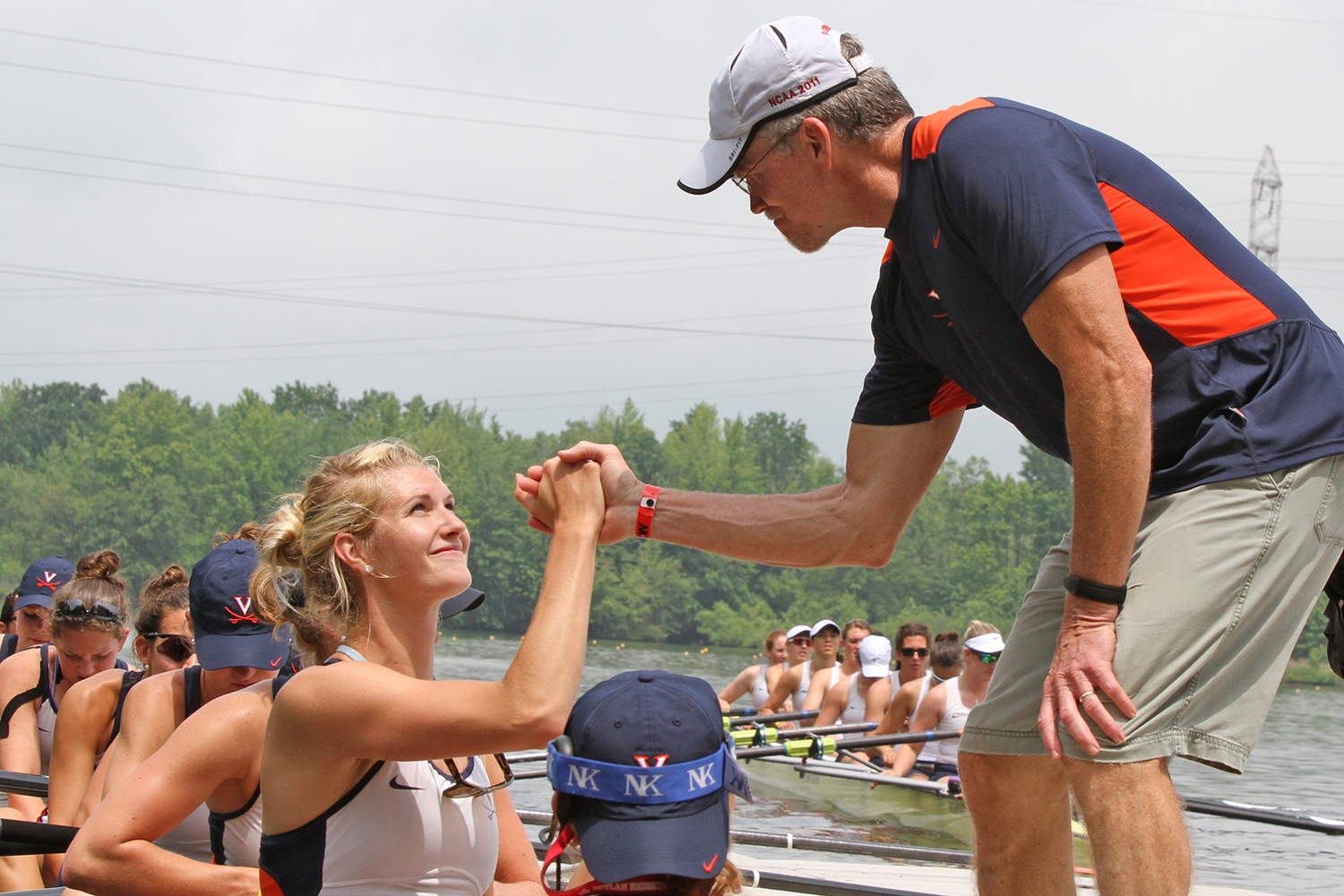 University of Virginia rowing head coach Kevin Sauer has been inducted into the Pocock/Collegiate Rowing Association Hall of Fame, announced June 13 during the Pocock/CRCA All-America, Coach of the Year and Hall of Fame awards show.

Sauer was honored for his major impact on the UVA rowing program. The two-time CRCA National Coach of the Year (2010 and 2012) has elevated Virginia to among the most elite rowing programs around the country.

Sauer, who completed his 22nd season at UVA this spring, guided the Cavaliers to NCAA titles in 2010 and 2012, plus 17 of the 18 Atlantic Coast Conference championships ever held and 11 NCAA top-four finishes.

In addition, individual Cavalier boats have been crowned national champions nine times, including five times in the varsity four (2004, 2005, 2007, 2010 and 2015) and three times in the second varsity eight (1998, 1999 and 2005). Sauer’s program hit another high in 2012 as the UVA varsity eight won the NCAA title for the first time and clinched the team title in the process.

“I am humbled and honored, and this reflects 40 years of hard work and great character from the student-athletes and coaches with whom I have worked,” Sauer said. 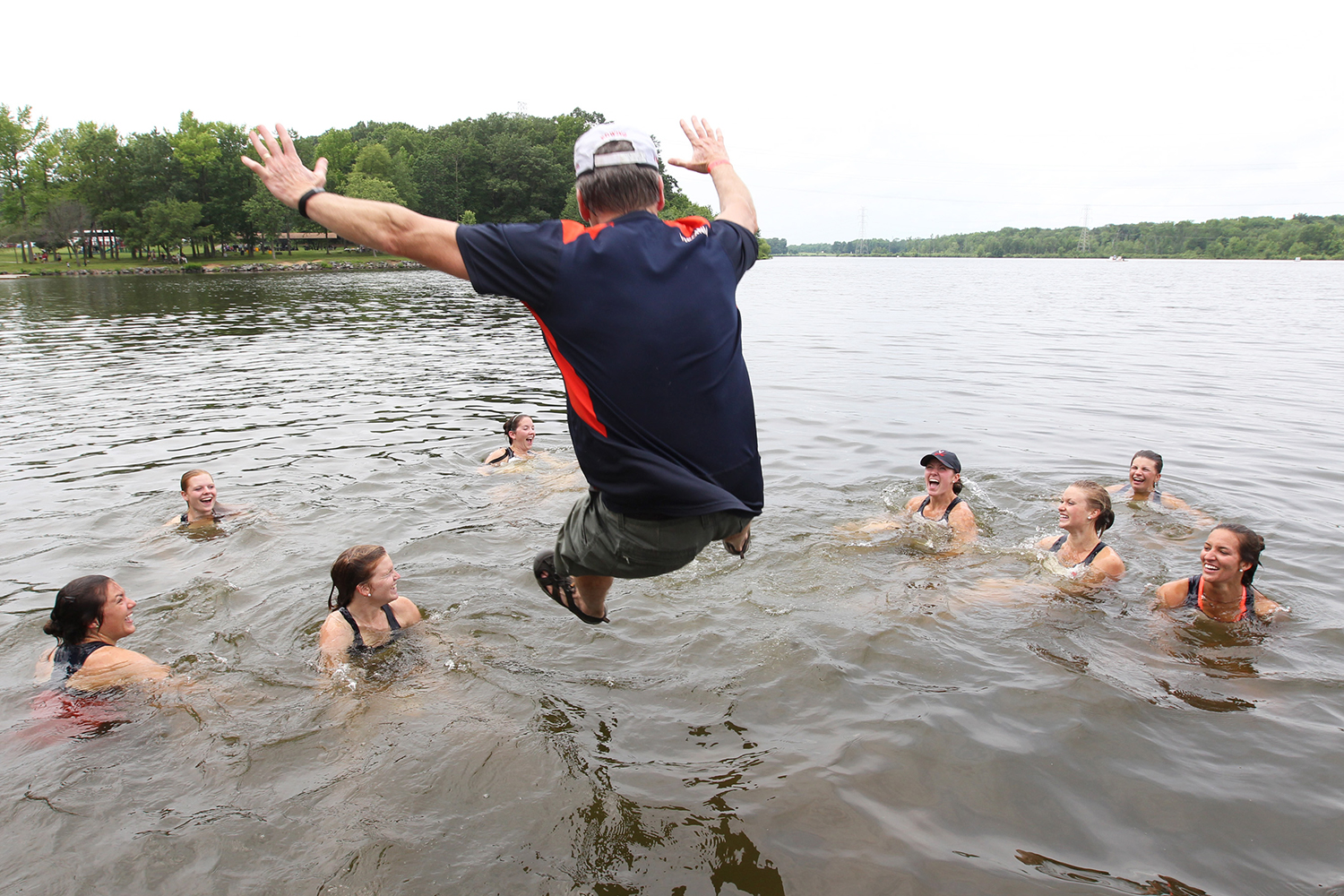 Sauer was hired as the Virginia Rowing Club’s second full-time professional coach in the fall of 1988. He oversaw the direction of both the men’s and women’s club teams until the women’s team was upgraded to varsity status and began competition in the fall of 1995. Both teams thrived under Sauer, including the women’s varsity four winning the club national championship in 1995.

Once at the varsity level, Sauer quickly built Virginia into a national powerhouse. Virginia is one of just seven schools to have claimed NCAA championships (Brown, California-Berkeley, Harvard, Ohio State, Stanford and Washington are the others) and one of four schools to compete in at least 18 NCAA Women’s Rowing Championships.

The Cavaliers have won 68 of the 75 events held at ACC regattas. Fourteen UVA crews have been named ACC Crew of the Year and Sauer has been honored as ACC Coach of the Year 11 times. Additionally, under Sauer’s tutelage, 39 student-athletes have earned 53 CRCA All-America citations and he has had 81 All-ACC selections. Virginia has had multiple All-Americans 17 years in a row and had at least one member on the first team in 18 consecutive seasons.

Meyer, the Merrill D. Peterson Professor of Landscape Architecture, began teaching at UVA in 1993 after holding positions at the Harvard Graduate School of Design, George Washington University and Cornell University. At UVA, she chaired the landscape architecture department three times before ascending to the deanship.

The society announced its 2017 honors recipients on June 13. Selected by the society’s board of trustees, the honors represent the highest awards it presents each year. They will be presented Oct. 23 during the 2017 ASLA Annual Meeting & EXPO in Los Angeles.

For working to improve patients’ recovery times and reduce readmissions, the heart failure program at the UVA Heart and Vascular Center has received two national quality awards from the American Heart Association.

The Advanced Heart Failure and Transplant Center earned the AHA’s 2017 Get With The Guidelines-Heart Failure Gold Plus Quality Achievement Award and was named to the Target: Heart Failure Honor Roll.

“Each day, our multidisciplinary heart failure team is working to provide excellent care that is tailored to the needs of each patient,” said Dr. James Bergin, medical director of UVA’s heart failure/cardiac transplantation program. “It’s wonderful to see our team’s dedication recognized by the American Heart Association.”

UVA Honored as Center of Excellence for Bone Marrow Cancer

The UVA Cancer Center has earned recognition as a national center of excellence for its care of patients with myelodysplastic syndrome, a cancer of the bone marrow that often leads to leukemia.

UVA is the only center in Virginia to receive this designation from the MDS Foundation for the treatment of this condition, which UVA hematologist Dr. Michael Keng said is often referred to as a “bone marrow failure” disorder.

Bone marrow produces stem cells that make white blood cells, red blood cells and platelets. In patients with MDS, the marrow does not produce enough healthy cells. When there are not enough healthy cells, there is an increased risk of infection, bleeding, easy bruising and anemia. Approximately 30 percent of patients diagnosed with MDS will progress to a diagnosis of acute myeloid leukemia.

According to the MDS Foundation website, centers of excellence have:

•    Recognized expertise in understanding the form and structure of MDS

•    Expertise in how genes and chromosomes impact MDS

•    Researchers that have published peer-reviewed articles on MDS

“UVA is devoted to providing support, research, treatment and education around MDS to all patients, caregivers, physicians, nurses and other health care providers,” Keng said.