After 53 Years, Cavalier Inn to Host its Last Guests on Finals Weekend 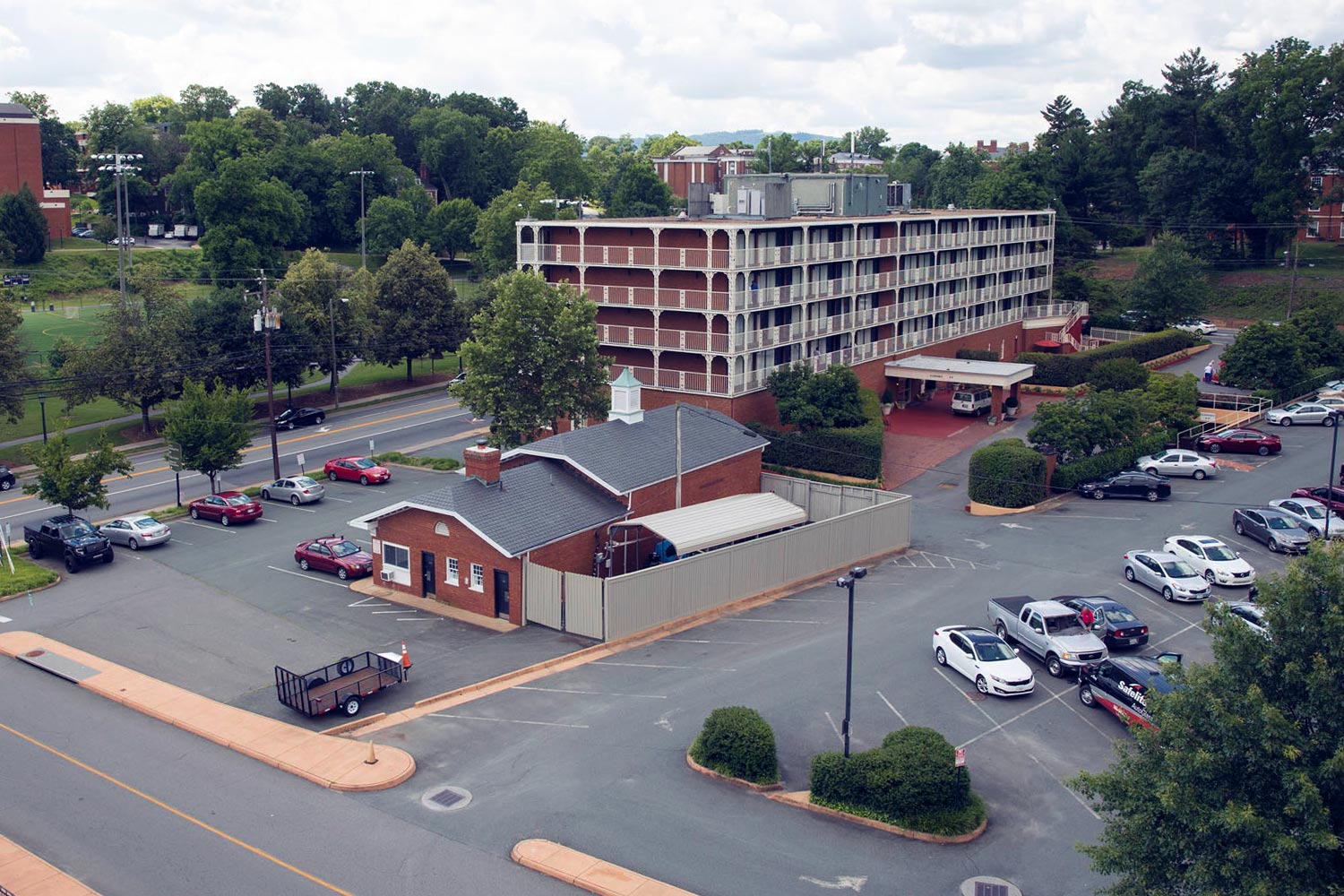 The razing of the Cavalier Inn – first built in 1963 – and nearby buildings will eventually lead to a more attractive entrance to the UVA Grounds. (Photo by Dan Addison, University Communications)

The Cavalier Inn, a five-story hotel used by Wahoo fans for six decades, will host its last guests on the weekend of Final Exercises, then make way to accommodate plans to establish a significant new entrance corridor to the University of Virginia.

The hotel, located at the intersection of Ivy Road and Emmet Street, first opened in 1965 and was purchased by the UVA Foundation in 1998. It will say good-bye to its final visitors at check-out on the morning of May 21.

In the days immediately after, safety fencing will be placed around the area as officials prepare for demolition later in the summer, beginning the groundwork for the project known as the Ivy Corridor Landscape Framework Plan. 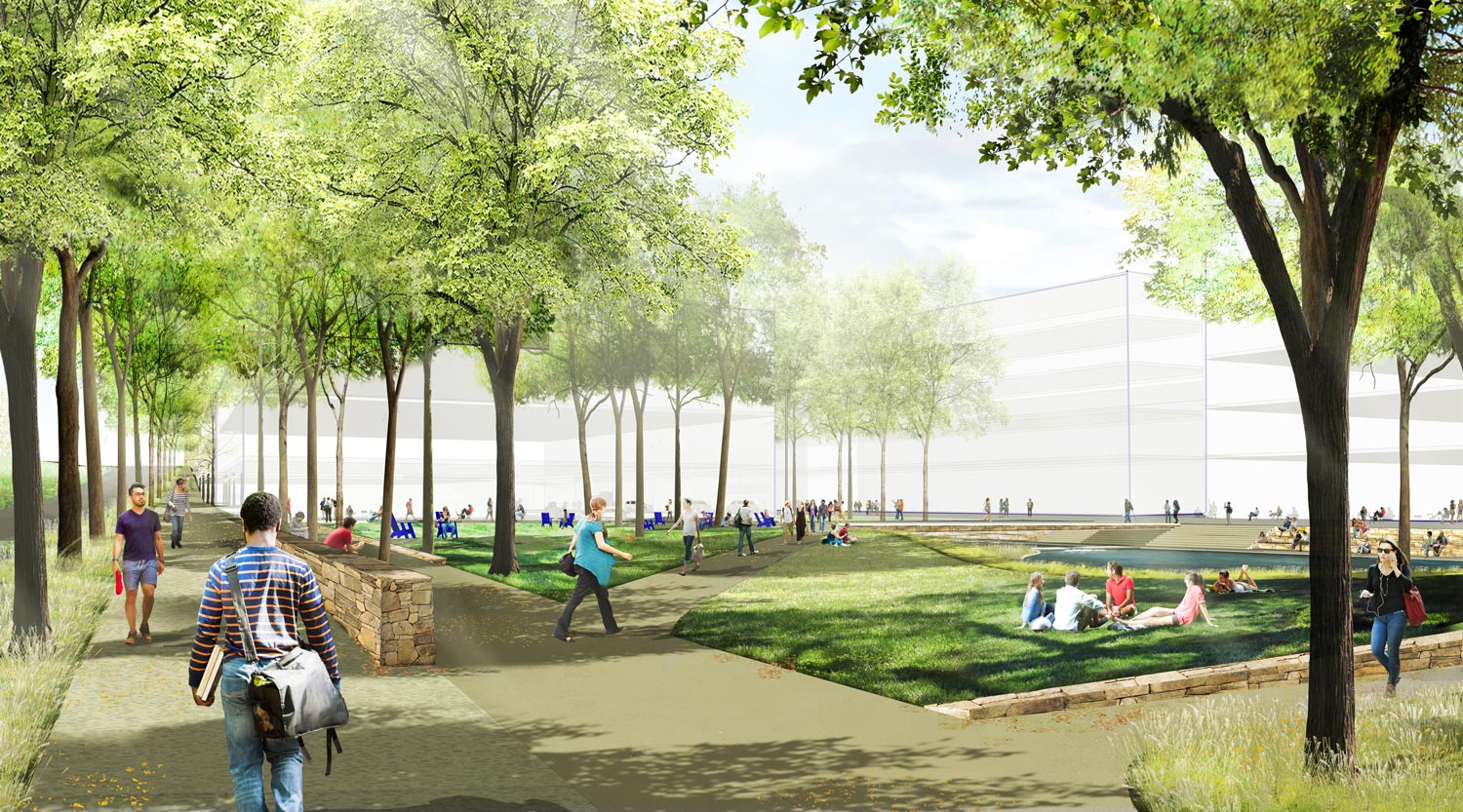 A rendering shows the large, open green space that will occupy the area at the corner of Emmet Street and Ivy Road and will act as an anchor for the overall Ivy Corridor redevelopment, says Architect for the University Alice Raucher.

The first phase of the plan, initially approved by the Board of Visitors in September 2016, will focus on creating open green space, accommodating storm water, undergrounding utilities and building a new streetscape in the area bordered by Emmet Street, the railroad tracks, and Ivy and Copeley Roads. Phase I stops at the western end of the garage.

That work will start a years-long process to re-imagine a broader space that Architect for the University Alice Raucher calls “one of the most strategic parcels of University land.”

“This will set the direction for a more physically connected plan for the next generation of the University of Virginia,” Raucher said of the overall Ivy Corridor project.

The Ivy Corridor Landscape Framework Plan covers about 14.5 acres that are owned by the University and the UVA Foundation. Phase I has a completion goal date of the summer of 2019.

In January, development scenarios were presented to the Board of Visitors for the parcel that included a performing arts center, additional academic buildings, a University museum building and a hotel and conference center. A replacement hotel was recommended by UVA President Teresa A. Sullivan’s Hospitality Task Force, charged with reviewing all of the University’s existing hospitality interests and functions. 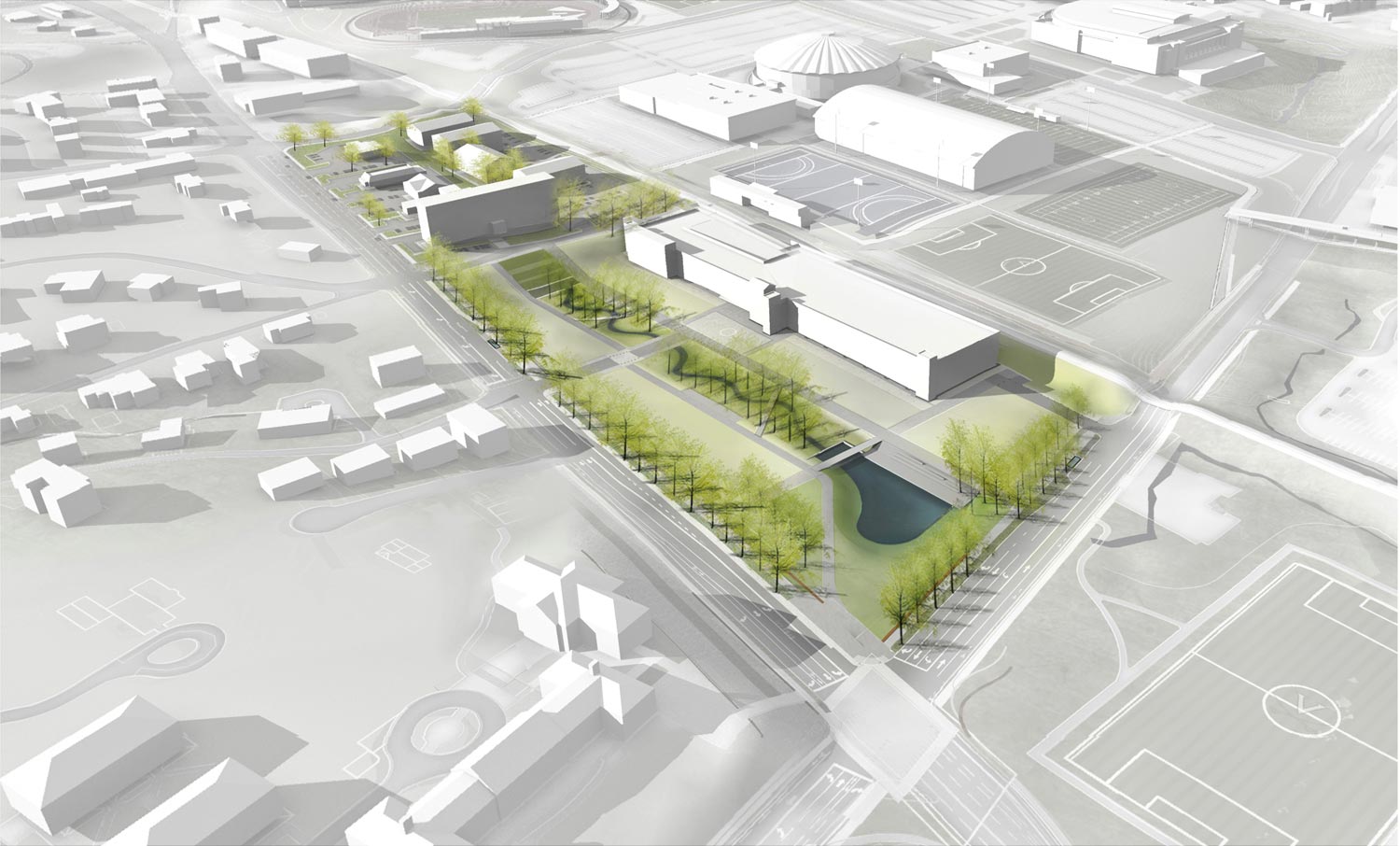 An aerial rendering shows the overall Ivy Corridor redevelopment plan for the area bordered by Emmet Street, the railroad tracks, and Ivy and Copeley roads.

“The large, open green space, the stream and the storm water pond act as an anchor for the site,” Raucher said. “It is the organizer for any future surrounding buildings.”

There will be two sets of fencing around the properties after Final Exercises: one for the Cavalier Inn, the Outdoor Recreation Center and 1939 Ivy, and another for The Villa Diner, which will relocate a mile up the road to 1250 North Emmet Street. It’s important to note that the access road that leads to the Emmet/Ivy Parking Garage will remain open during the demolition project.

The goal is that most of the demolition work will be complete by the time students return for the fall semester in late August.

It will mark the end for the Cavalier Inn, which UVA Foundation CEO Tim Rose said, “has served the community well for years.”

The Cavalier Inn was due for significant infrastructure repairs and upgrades as a result of its aging physical plant. Given these associated costs and the long-term Ivy Corridor redevelopment plan, the Board of Visitors approved ceasing operations by June in order to clear the site.

The 118-room hotel has hosted UVA football players during summer training, high school athletes for camps at UVA and, of course, countless Wahoo fans who have walked from the hotel to Scott Stadium, John Paul Jones Arena and other athletics venues.

The University made it a top priority to assist with the transition of displaced Cavalier Inn employees. All of the employees were offered severance benefits based on their length of service. They also were offered outplacement assistance in areas including résumé writing, job search training, interviewing skills coaching and additional one-on-one consultation, either in-person or by telephone.

The City of Charlottesville received $12.1 million in state transportation funds in 2016 to improve pedestrian and bicycle connections and safety along Emmet Street, a proposal on which the University collaborated and is now one of the participants on the project’s steering committee.

The hope, Raucher said, is that as the Ivy Corridor redevelopment takes shape, it simply “looks like it’s part of Grounds.”

“Nothing is going to change the heart of the University. That will always be the Lawn and the Rotunda,” she said. “But the Ivy Corridor is strategic in the University’s growth and will help to bring all of Grounds more physically together.”

What Is Biotechnology? Where Is It Headed at UVA? END_OF_DOCUMENT_TOKEN_TO_BE_REPLACED