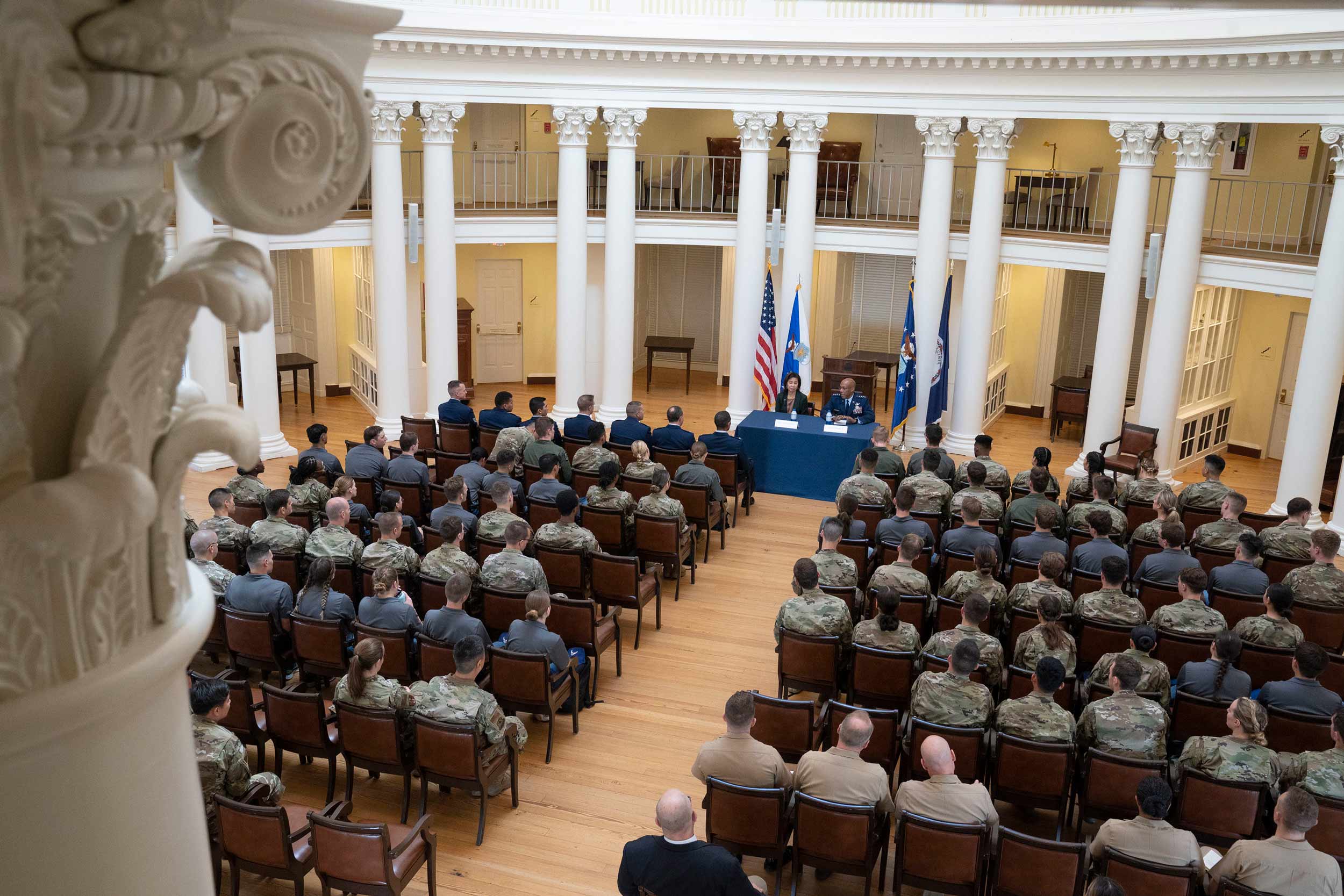 ROTC cadets, veterans and others filled the Dome Rome for a visit with Gen. C.Q. Brown Jr., chief of staff of the Air Force. (Photos by Dan Addison, University Communications)

He loves to fly, and he’s logged more than 2,900 flight hours plus 130 combat hours. But in a recent visit to the University of Virginia’s Grounds, the Air Force’s senior uniformed officer was clearly down to earth.

“We are ordinary people living out an extraordinary opportunity,” said Gen. C.Q. Brown Jr., chief of staff of the U.S. Air Force. Brown, accompanied by his wife, Sharene Brown, a 1983 UVA graduate, spent Tuesday here, where they met in several sessions with student leaders and those interested in public service or military careers, ROTC cadets, veterans, and members of the Division of Student Affairs, as well as with President Jim Ryan.

The Browns came to UVA at the invitation of Vice President and Dean of Students Robyn S. Hadley, who met them eight years ago when their younger son enrolled in a scholars program Hadley led at Washington University in St. Louis. The Browns were the last of four guests Hadley invited over the past year as part of “Managing for THE NOW, Managing for THE NEXT,” a professional development speaker series she initiated for Student Affairs.

Themes of family, resilience, connection, community and service came up throughout the day as the Browns took questions from audience members and shared their life story.

The son of an Army colonel, Gen. Brown described growing up in a military family and how he thrives on moves and change. He graduated from a Newport News high school and has been honored on many counts. In 2020, Time magazine named him one of the most influential people in the world.

His father’s influence led him to the ROTC program at Texas Tech University, where he was commissioned in 1984 as a distinguished graduate. Thirty-eight years later, he has been to every continent, become friends with international air chiefs in Singapore, Mongolia and other areas of the world, and risen to become the first African American military chief in the country’s history. (U.S. Army Gen. Colin Powell, of course, chaired the Joint Chiefs of Staff during his tenure from 1989 to 1993.) 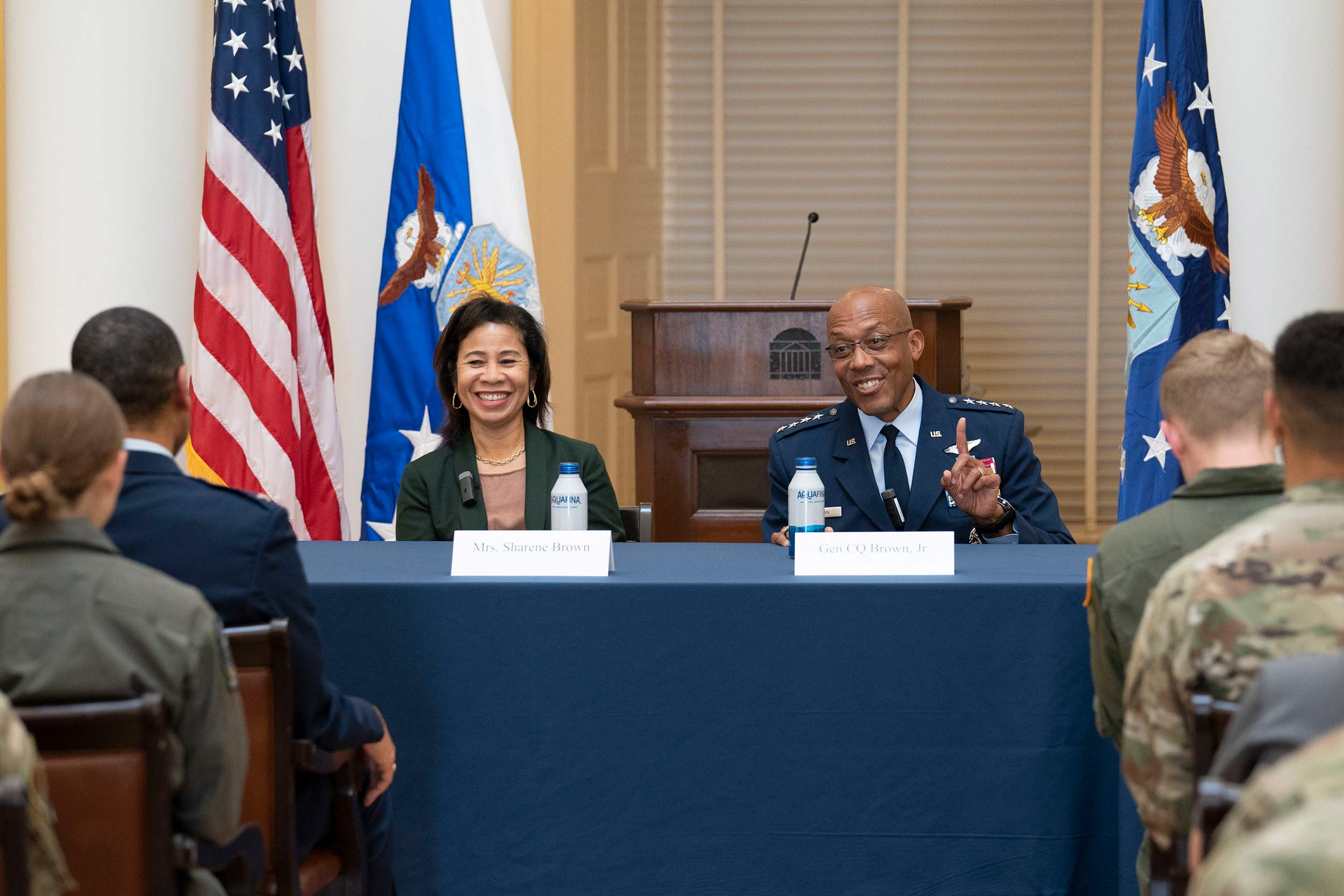 “It’s not so much about the military, but an opportunity to serve, to make a difference,” Brown said. “My mission statement is ‘C.Q. Brown made a difference.’” He also discussed the joy it gives him to “get hard problems” to solve and to “break down barriers.”

On leadership, he referenced the book, “Lincoln on Leadership,” and quoted the Rev. Martin Luther King Jr.: “The ultimate measure of a man is not where he stands in moments of comfort and convenience, but where he stands at times of challenge and controversy.”

When a UVA cadet asked the soft-spoken general what he has learned from his worst bosses, he admitted that he has little patience for the “yellers and screamers.”

“Every leader I’ve had, I’ve picked up on something valuable,” he added. “It’s always about how you treat people.” He described going to bases and meeting with airmen without their leaders so he could hear directly from them. “I want to hear the voices of the people I’m privileged to lead. And when I have meetings, it’s nearly always the meeting after the meeting – the conversations in the hallway – that matter the most.”

Reflecting on the day’s program, Air Force Cadet Samantha Bridges, a fourth-year ROTC member, said a main takeaway was that “good leaders are only as good as their followers, and great leaders empower their followers by listening and working to uplift them.”

Sharene Brown, who frequently travels with her husband, shares a commitment to listening and encouraging everyone in the larger Air Force family to voice their thoughts and concerns. For her, that includes significant others, spouses and children.

She emphasized, “Military families do matter.” She added that military members themselves may not reveal their concerns, but family members often do when given a chance to speak honestly about their experiences. She also emphasized the tremendous number of resources available to military families, many of which they may not know about.

As she described her work with families, her husband turned to tell the audience how proud he was of what she has accomplished. “When we go to bases, I’m operations and she’s families,” he said. He also mentioned that his wife’s outgoing personality complements his more reserved nature and makes their partnership even stronger.

Fourth-year Cadet Jeffrey Nutt was especially struck by Sharene Brown’s insights and work. “There have been few opportunities for us to learn about family life in the military, but Mrs. Brown’s advice on how to tackle issues (such as) changing duty stations reminded us to strive to put family first in every pertinent decision,” he said.

When a cadet asked if his generation was at risk of not learning from the generations before them, Gen. Brown said he welcomed newer officers questioning the status quo. “People can become too comfortable. I don’t mind if a junior officer asks me hard questions, especially when they also come up with ideas to solve the problem.” 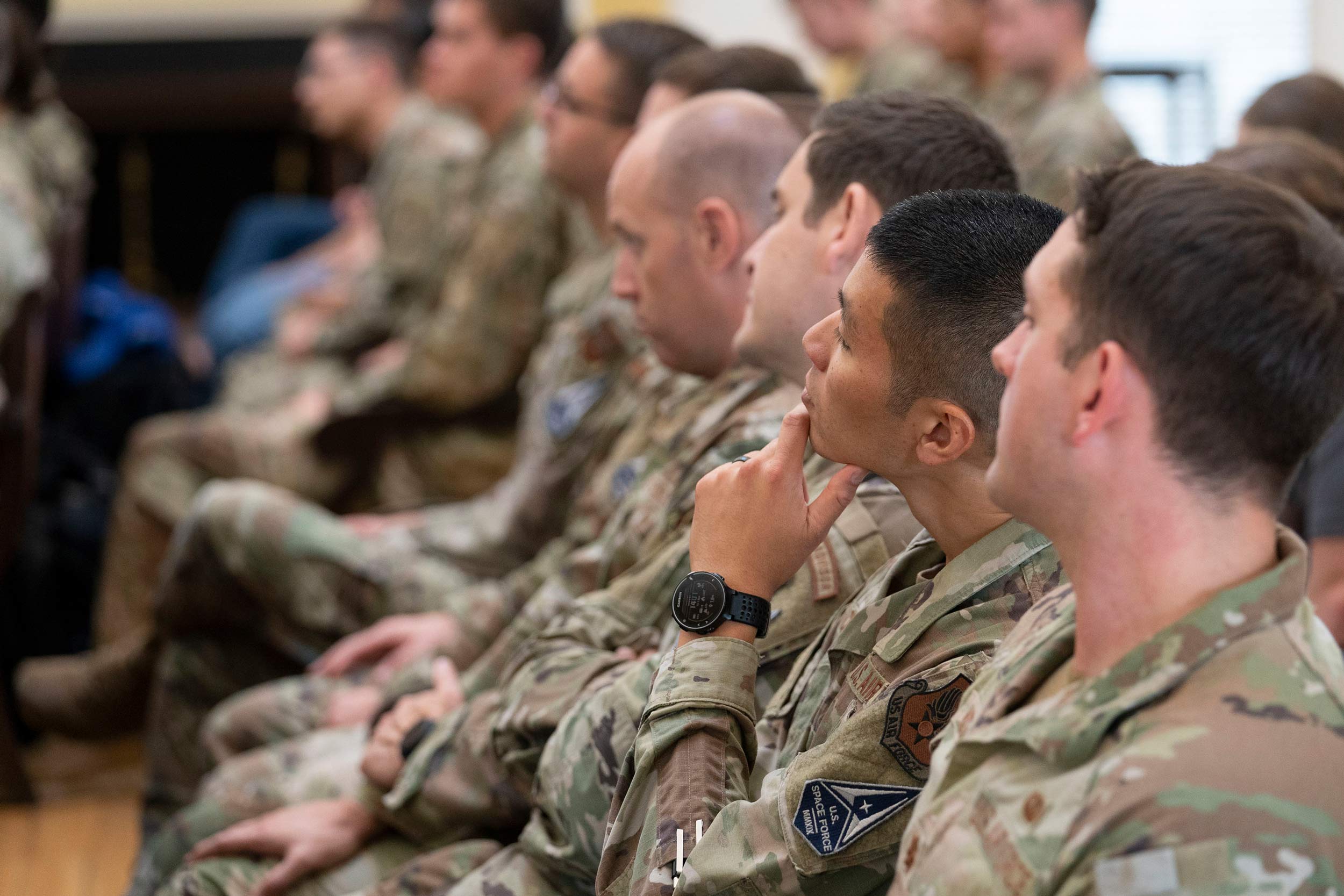 Air Force ROTC cadets from UVA, James Madison University and Liberty University listened and also participated in discussion on topics such as military service and leadership.

The Browns said they were struck by the many signs of change on Grounds. Driving by the Emmet-Ivy Corridor construction site, they noticed the new School of Data Science building. Sharene Brown remarked on how foreign the idea of data science would have been during her college years. Gen. Brown said he would like to see more data scientists in the Air Force.

“While the University has continued to grow in its student resources and research development, the Grounds have retained their historic charm,” Sharene Brown said. “We’ve traveled all around the world, and spending time at UVA was a warm walk down memory lane.”

Gen. Brown said talking with young, rising leaders is one of the best parts of his job.

“Throughout each conversation, I listened and learned from their unique perspectives, and appreciated the thoughtful questions they posed,” he said of his visit to UVA.

Col. Jason Bell serves as commander of Air Force ROTC Detachment 890, which includes cadets from UVA, Liberty University and James Madison University. Cadets from all three universities attended the afternoon session. Bell said he appreciated the opportunity for cadets to  “hear two great leaders share their experiences in such an intimate way.”

Hadley said she was pleased that so many students, faculty and staff could learn from the Browns’ story. “My team and I value the many contributions of our ROTC students and veterans,” she said. “They are an important part of the student body. The Browns serve as a powerful example of a life of service. They left us with food for thought on many topics. We are grateful for their service and for so generously sharing their time with us.” 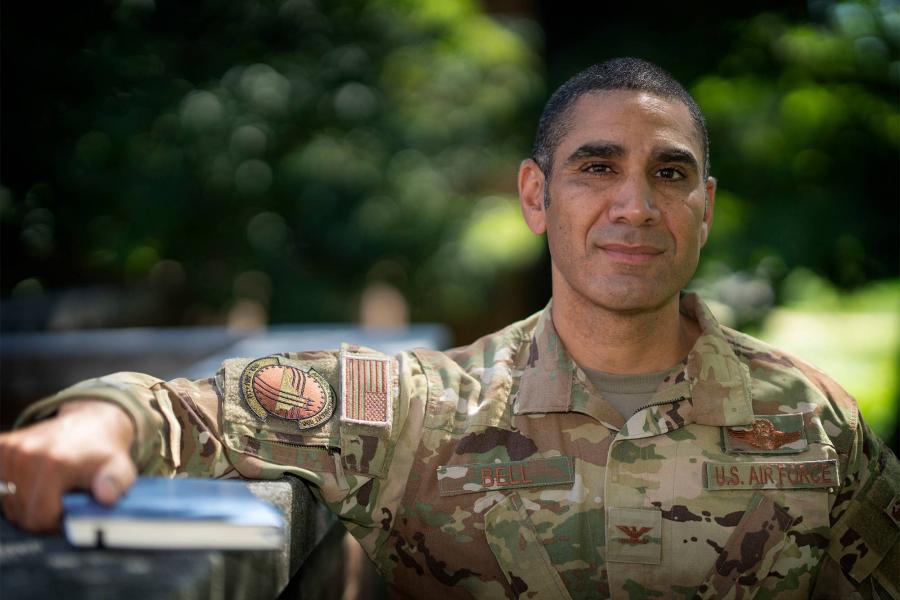 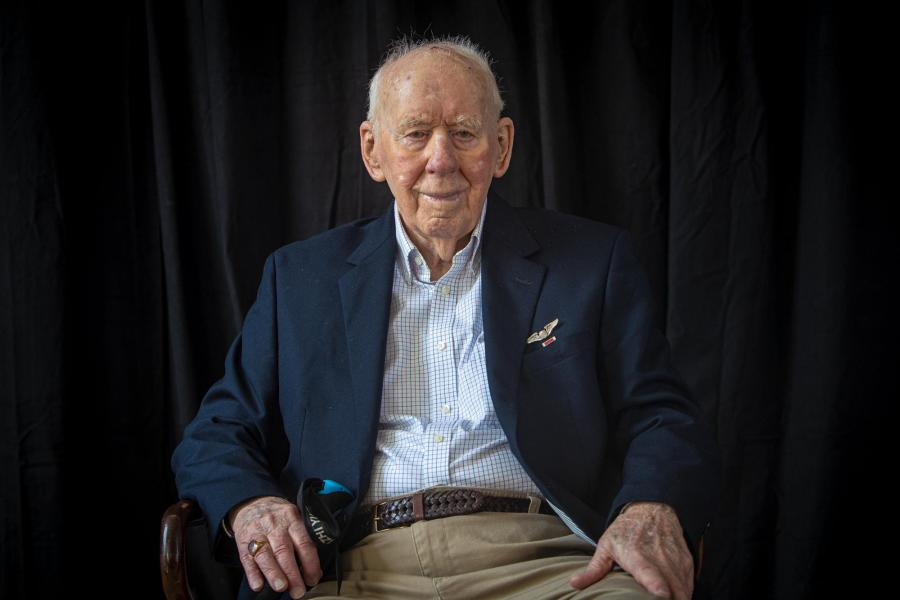 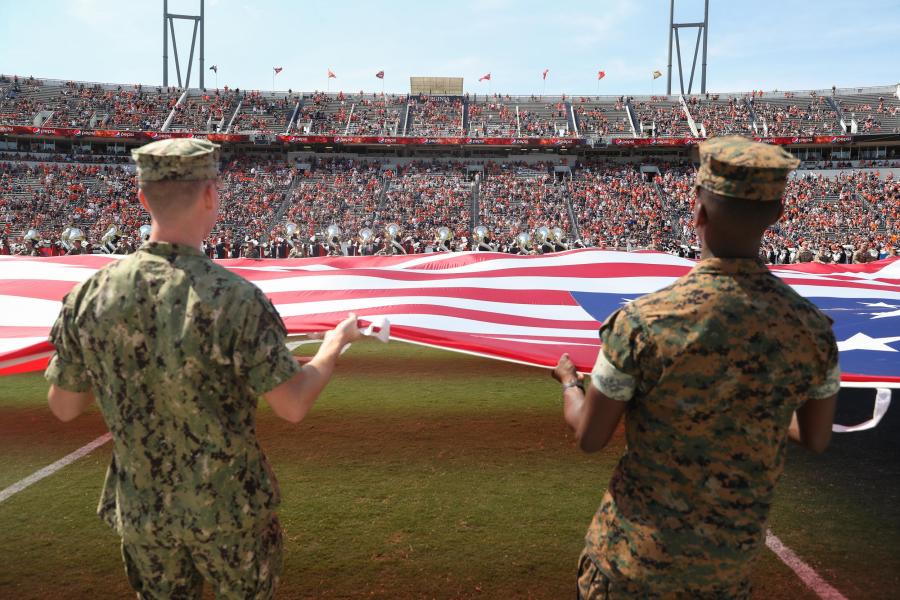 The Bigger Picture: A Big Win on a Day of Remembrance